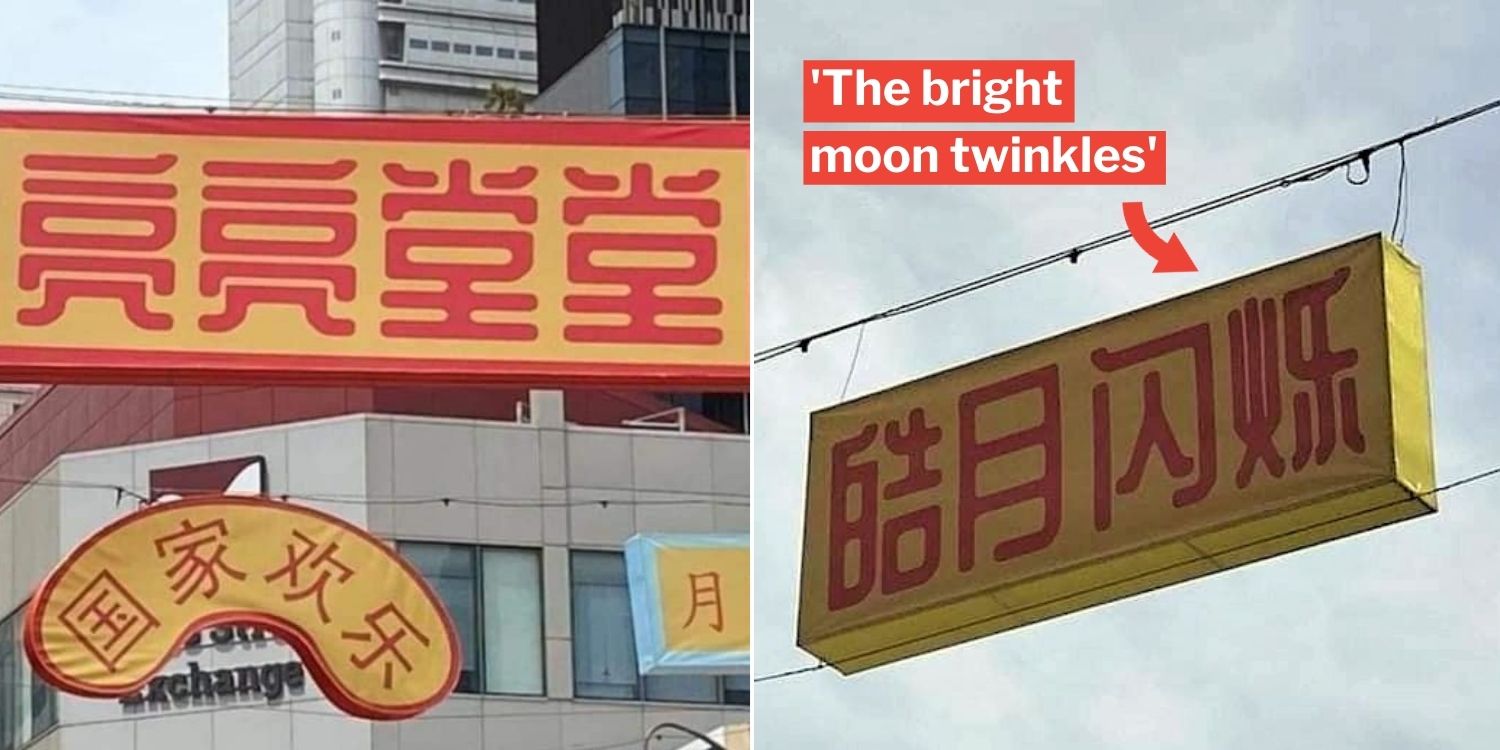 The decorations were meant to evoke HK-style feels.

The Mid-Autumn Festival is coming, and besides being able to eat tasty mooncakes again, another highlight of the season is being able to gaze at the annual Chinatown light-up.

But the festival seems to have been ruined for some netizens, who criticised the signs in the light-up as “inappropriate” and “embarrassing” – one even accused the organisers of polluting Chinese culture.

Following the feedback, the offending signs have been taken down. 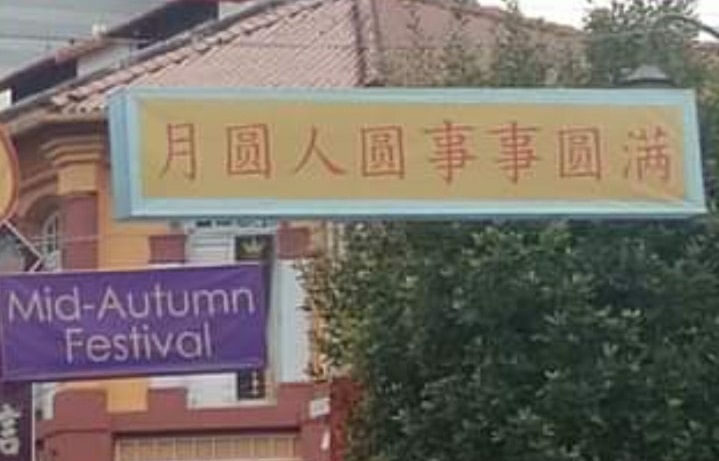 This year’s Mid-Autumn Festival light-up includes lighted signs strung across South Bridge Road, which were put up on Thursday (10 Sep). Here’s our version for comparison: 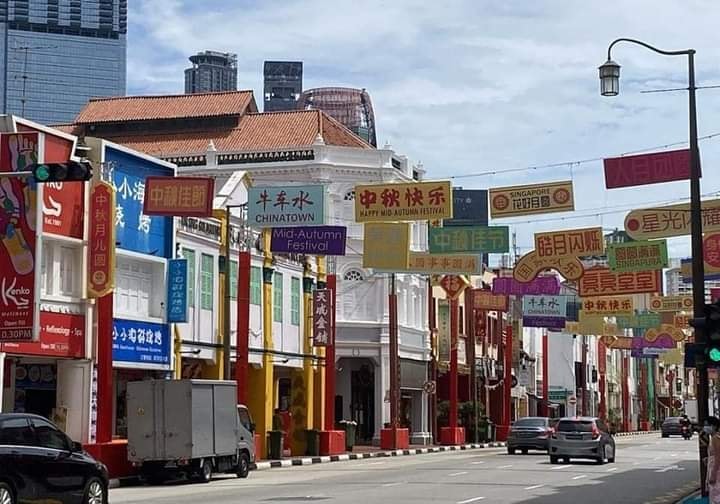 Well, it doesn’t exactly transport us to Hong Kong, but people spent a lot of time putting them up so we should applaud the effort, we guess.

Words on the signs annoy netizens

Anyway, it wasn’t the execution that annoyed some netizens, but the words on the signs.

For those of us who failed Chinese in school, they probably look mostly like gibberish.

But those of us who’re actually competent in the language and versed in Chinese culture may find some of the messages on the signs awkward at best.

For instance, this sign carries the words “亮亮堂堂”, which translates roughly to “bright and dignified” – apparently not traditionally used for the Mid-Autumn Festival. Below, there’s a sign reading “国家欢乐”, which means “joy for the country” – a nice sentiment, but perhaps more appropriate for National Day?

Then there’s this sign, which reads “皓月闪烁”. That translates nonsensically into “the bright moon twinkles”. 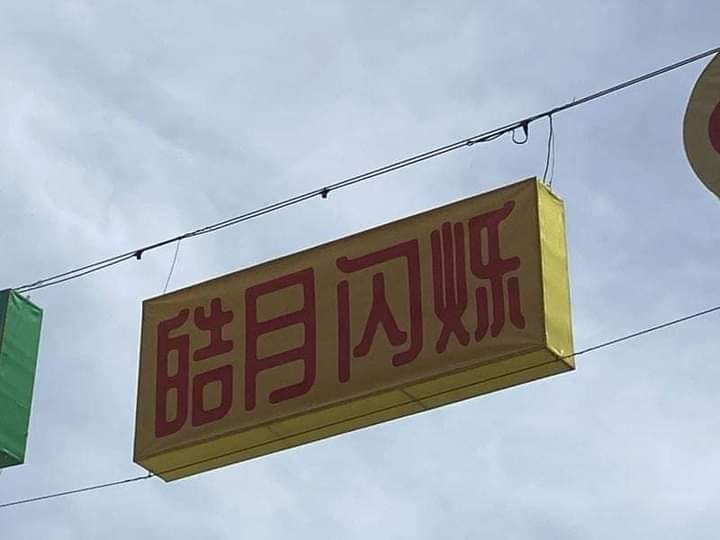 If one sees the moon twinkling, it may be a cause for concern.

One netizen said as much when he asked: “When there’s a bright moon in the sky, how could it twinkle like the stars? Only in Singapore’s Chinatown can we see such a strange sight!”

In case you’re wondering, the correct phrase is “皓月当空，星光闪烁” (Bright moon is in the sky, stars are twinkling).

Another questionable sign is this one, which says “月到是秋分外明”, or “the moon is especially bright in autumn”. According to an outraged netizen, it’s actually part of a couplet, which should read: “人逢喜事精神爽，月到中秋分外明”.

That means when people get good news, they’re always energised, just like the moon is especially bright during Mid-Autumn.

The same annoyed netizen accused the organisers of having the guts to change writings of old just to try something new.

Saying that the original couplet actually came from the Ming Dynasty, he urged the tourism board to rectify the sign or we would be a laughing stock. 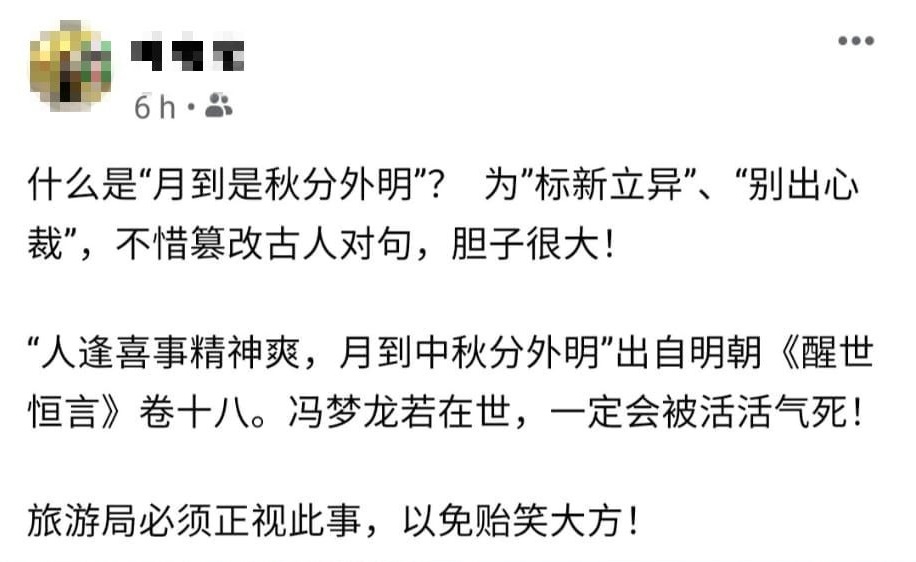 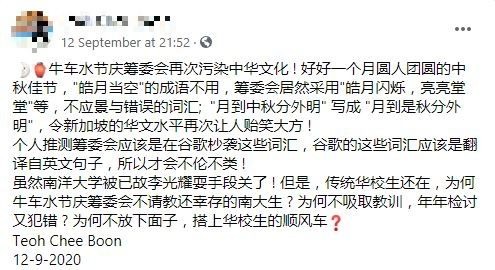 He even posited that the committee used Google Translate, that’s why the signs came out like that.

Although Nanyang University has been shut down, its students are still around, so why didn’t the committee consult them, he questioned.

He even asked where those “neither East nor West” Chinese experts were, saying they’re an embarrassment.

10 ornaments to be replaced

After the feedback, the Chinatown Festival Street Light-up Sub-Committee has said it will replace about 10 ornaments in the light-up.

She did acknowledge, though that some seemed to be “unconventional”. 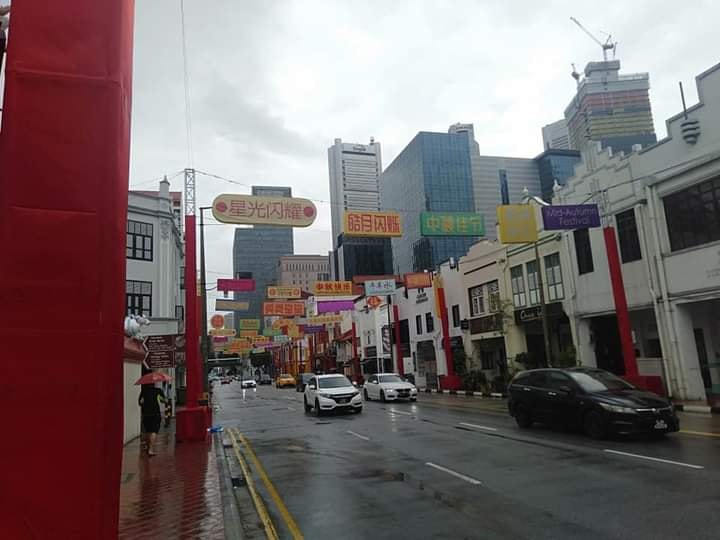 These Hong Kong-style decorations are only meant for South Bridge Road. On Eu Tong Sen Street and New Bridge Road, more traditional decorations will be used.

Designs not removed in time

Ms Lee also said that it had previously told contractors to remove some of the designs before production started, according to ST.

However, they were not removed in time, she added.

Thus, they will be replaced by Wednesday (16 Sep), before the live-streamed light-up ceremony on Thursday (17 Sep).

While the Chinatown light-up has always been a popular part of the Mid-Autumn celebrations for most Singaporeans, the more Chinese-educated among us will definitely be looking out for whether the cultural references are correct.

The festival is a Chinese one, after all, and we should get the cultural elements right.

That said, it’s also important to have a good laugh once in a while, and we’re glad that the Chinatown Festival Street Light-up Sub-Committee has given us one again after the strangely masculine Moon Goddess last year.