The neighbourly feud began in 2015.

Many of us have a good relationship with our neighbours. Such friendliness can go a long way in making our lives in the community so much better.

However, sometimes unfortunate incidents can cause things to go awry.

Recently, a netizen named Mr Cheong was allegedly “attacked” by his neighbour, local host and actor Chua Enlai’s father, in a dispute outside his Tanah Merah home. 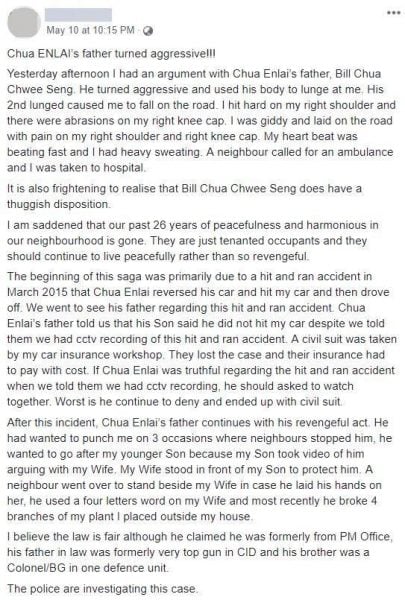 Pushed him to the floor

On Thursday (9 May), Mr Cheong had a dispute on the road outside his house with his neighbour, Mr Bill Chua.

Mr Cheong claimed that Mr Chua had used his body to lunge at him twice, causing him to fall backwards onto the ground.

The interaction was captured in full by a CCTV camera, presumably installed outside Mr Cheong’s house. 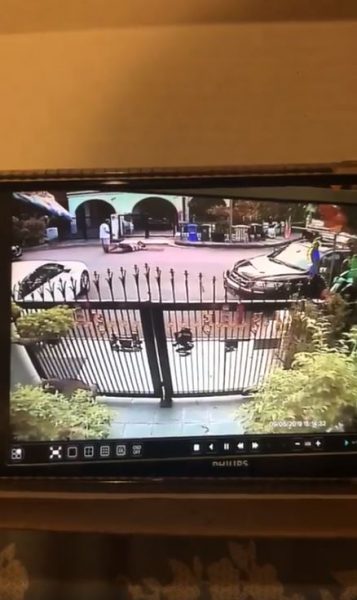 The impact of the fall resulted in an injured right shoulder, and Mr Cheong claims he also sustained abrasions on his right knee cap.

Another neighbour later called for an ambulance to transport him to the hospital for medical treatment.

According to Mr Cheong, the dispute was just one of many incidents beginning 4 years ago.

The feud between the neighbours first started from March 2015, after a hit and run accident which led Mr Chua Enlai having to compensate Mr Cheong for damages.

He had apparently hit Mr Cheong’s car while reversing, and drove off after that.

Later, Mr Cheong visited Mr Chua Enlai’s father regarding the accident, but he allegedly denied any wrongdoing by his son.

However, Mr Cheong had CCTV footage as evidence, and Mr Chua Enlai was eventually ordered to compensate damages incurred by Mr Cheong in a civil lawsuit.

After the lawsuit, Mr Cheong said that the vengeful acts by the older Mr Chua started.

On 3 occasions, he had wanted to punch Mr Cheong, but was stopped in time by other neighbours.

He had also attempted to go after Mr Cheong’s son after he filmed him arguing with his mother, and hurled vulgarities at them.

Most recently, he also broke 4 branches from a plant outside Mr Cheong’s house.

According to Mr Cheong’s post, police investigations are underway. It is unclear who had lodged the police report.

MS News has reached out to Mr Chua Enlai regarding the incident, and will update this article accordingly.

In the meantime, let’s hope the neighbours cease any hostility to each other and reconcile.

After all, a neighbourly feud doesn’t do either party any good. It would be in the best interests of both sides to reach an amicable settlement soon.