Huat a fast way to earn some angbao money.

Unlike these traditional games, a new one has recently taken Singapore by storm, with the same aim in mind.

Known as the blindfolded money scooping challenge, family members take turns scooping money up into bowls or other containers while wearing blindfolds. 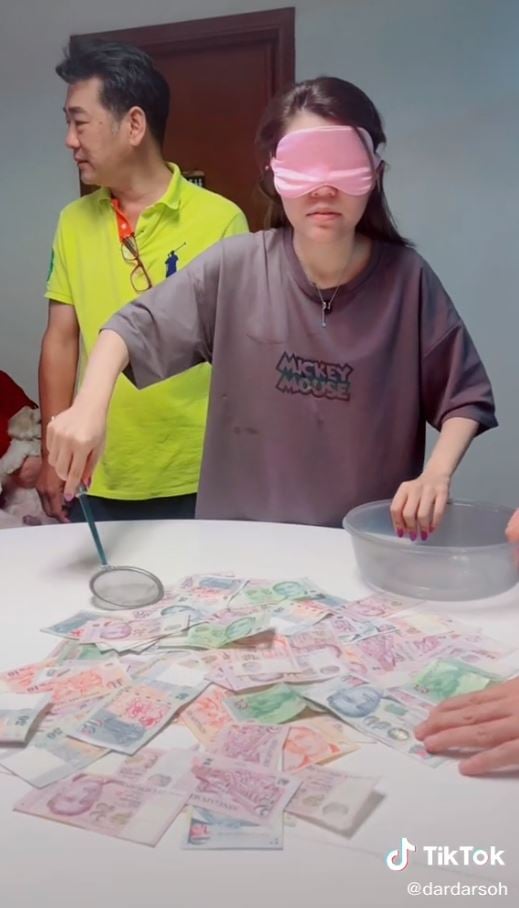 They’ve shared their hilarious attempts on social media, to the delight of many users.

While the name of the game may sound relatively easy, players are proving that it could be tougher than it seems.

In various TikTok videos, family members try to scoop as many dollar notes up as they can using a big spatula or similar kitchenware while being blindfolded.

Other members present, meanwhile, record their antics, likely to show how amusing they looked at the end of it.

In a TikTok video shared by Charlotte Gung, a man confidently attempts to scoop some money into his metal tray.

As he fumbles with the utensil, family members including the OP trick the optimistic player, encouraging him to stop playing as he has scooped too much cash — when in fact, his tray is cold and empty.

Upon removing his blindfold, the man starts laughing hysterically when he sees that he has scooped up nothing at all.

In a similar video, TikTok user Lingen shared her father’s endearing attempt at the game.

Unlike the previous player, he treads more carefully, moving his spatula around the mahjong table as if to detect the cash’s whereabouts.

Despite his best efforts, he ends up only attaining a grand total of $2.

The OP’s mum also tried scooping, fortunately leaving the mahjong table with $20 after a few tries.

Next, the OP’s eldest brother gives it a go, only to scoop up nothing but air.

His turn audibly leaves the family tearing up with laughter.

Thankfully, the second brother later turns things around, scoring a 50-dollar note at the end of his attempt.

But most disappointing perhaps is the OP’s attempt at the end, as the cash she has painstakingly collected fall off her tray.

In spite of the varying outcomes, however, the family appeared to have had a good time bonding over the game during CNY.

A chance for families to bond during CNY

Regardless of how much money each person walks away with, we can’t deny that the game offers a golden opportunity for families to bond.

After all, everyone loves winning cash and laughing at each other’s epic fails.

Will you be trying this challenge with your fam too? Let us know in the comments.