Must Share News – Independent News For Singaporeans
Home News Latest News Cross Island MRT Line Gets You From Punggol To Pasir Ris In... We’re no Tokyo when it comes to train station expansiveness, but we’re getting there.

The Land Transport Authority (LTA) has just announced that a part of the upcoming light green-coloured Cross Island MRT Line (CRL) has been finalised.

The CRL, which is set for completion in 2029, will run almost linearly across the country, from Jurong to Changi.

According to LTA, the new line – once completed – can get commuters from Punggol to Pasir Ris, a popular travel route, in under 15 minutes, versus a 40-min bus ride.

This means Punggol residents can finally feel like they’re not in some sequestered part of Singapore, in the near future once all phases are complete.

For now, let’s take a look at what Phase 1 entails.

As of today (25 Jan) only Phase 1 of the CRL has been confirmed.

Phase 1 of the line stretches 12 stations from Bright Hill to Aviation Park at Changi. The stations covered are:

Of these stations, 4 will be interchange ones, stations where you can switch from one line to another — Bright Hill (Thomson-East Coast Line), Ang Mo Kio (North-South Line), Hougang (North-East Line) and Pasir Ris (East-West Line).

The Thomson-East Coast Line, in case you’re wondering, is not completed yet. According to Transport Minister Khaw Boon Wan, the first stage, which runs through Woodlands, is set to open before Christmas this year.

Jurong to Bright Hill, not confirmed

Phase 2 of the CRL, which will trail from Jurong to Bright Hill is still up in the air.

This is because the underground track will pass through a Central Catchment Nature Reserve (CCNR) and LTA is still assessing if the construction of the track will harm the environment.

There are 2 routes which the train track can take — either directly through the CCNR or to skirt around it.

For one, the CRL will alleviate load on the East-West Line since it runs in pretty much the same direction.

A resident of Ang Mo Kio will be able to get to any part of Singapore in under an hour — as if they didn’t already have one of the best locations on the island.

This should give residents of either ends something to cheer about. 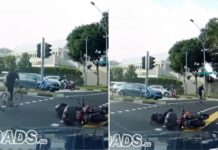