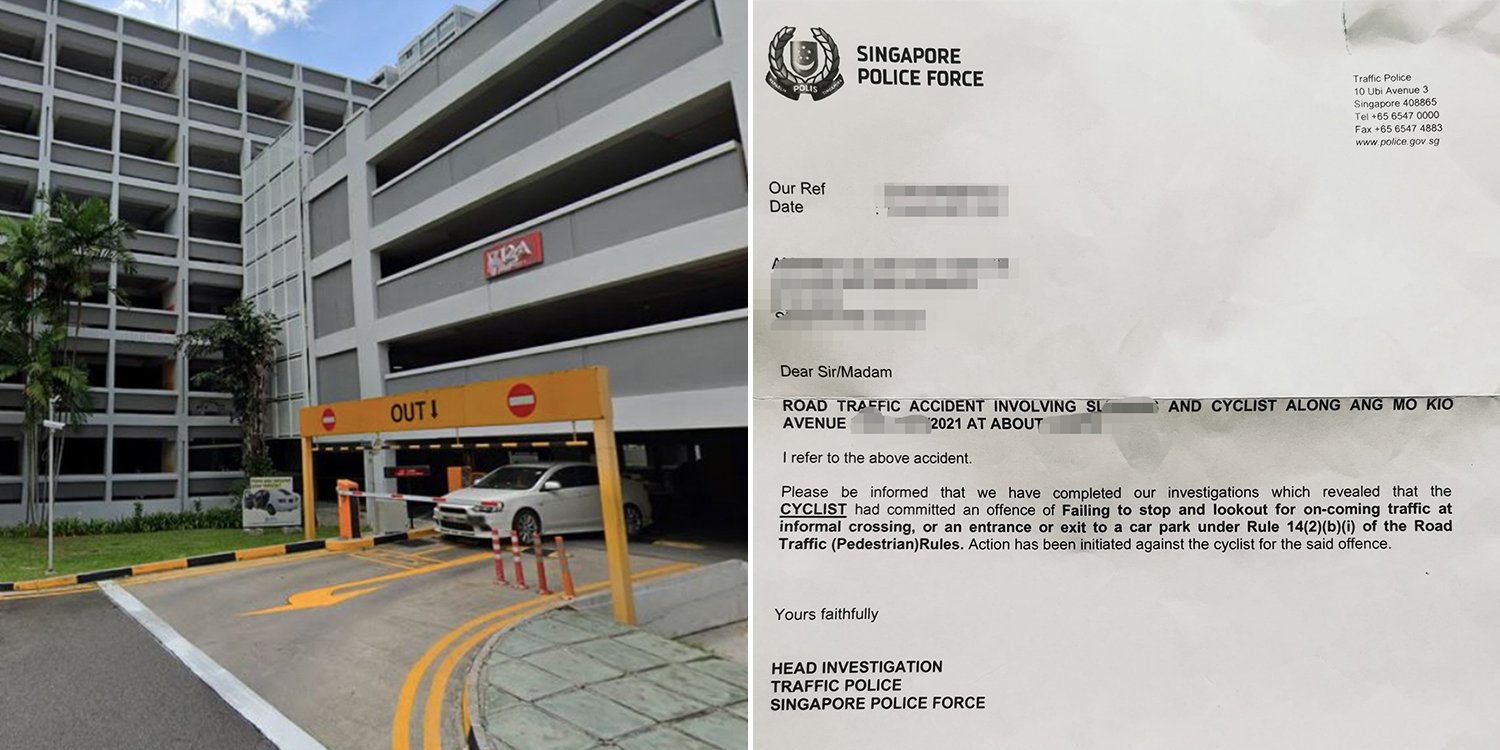 When a road accident involving cyclists occurs, it might not always be the fault of the driver.

Recently, a car driver shared his recent near-hit experience with a cyclist on Facebook. When driving out of a carpark in Ang Mo Kio, a cyclist came out of nowhere, causing him to suddenly put on his brakes to avoid impact. 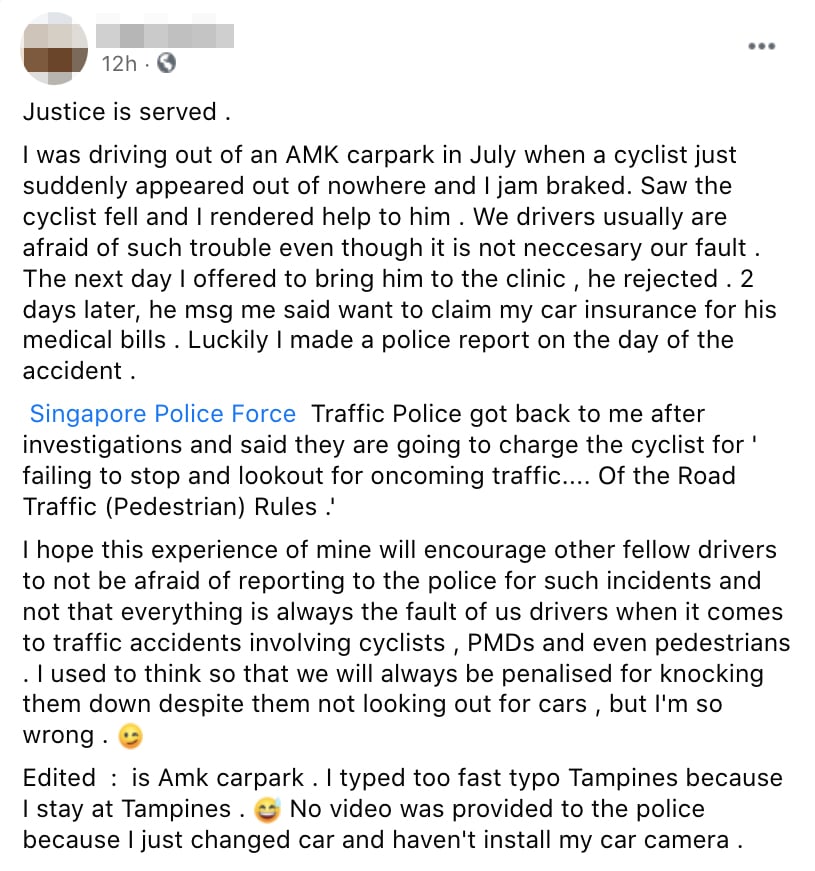 A few days after the incident, the cyclist tried to claim against the driver’s car insurance.

Fortunately for the driver, traffic police had investigated the matter and found that the cyclist had committed an offence instead.

On Sunday (12 Sep), the OP said he was driving out of a carpark in Ang Mo Kio when a cyclist suddenly appeared, causing him to jam on the brakes.

The cyclist fell despite not being hit by the car.

Seeing this, the driver rushed out to offer help. Though he offered to bring the cyclist to the clinic the next day, the cyclist reportedly declined the gesture.

To the driver’s surprise, he received a message from the cyclist 2 days after the incident.

The cyclist apparently wanted to claim against the driver’s car insurance for his medical bills. Thankfully, the driver had already made a police report on the day of the incident.

Upon further investigations, traffic police revealed that the cyclist was the one at fault. Hence, they sent the driver a letter to inform him they had taken action against the cyclist for failing to stop and look out for ongoing traffic. 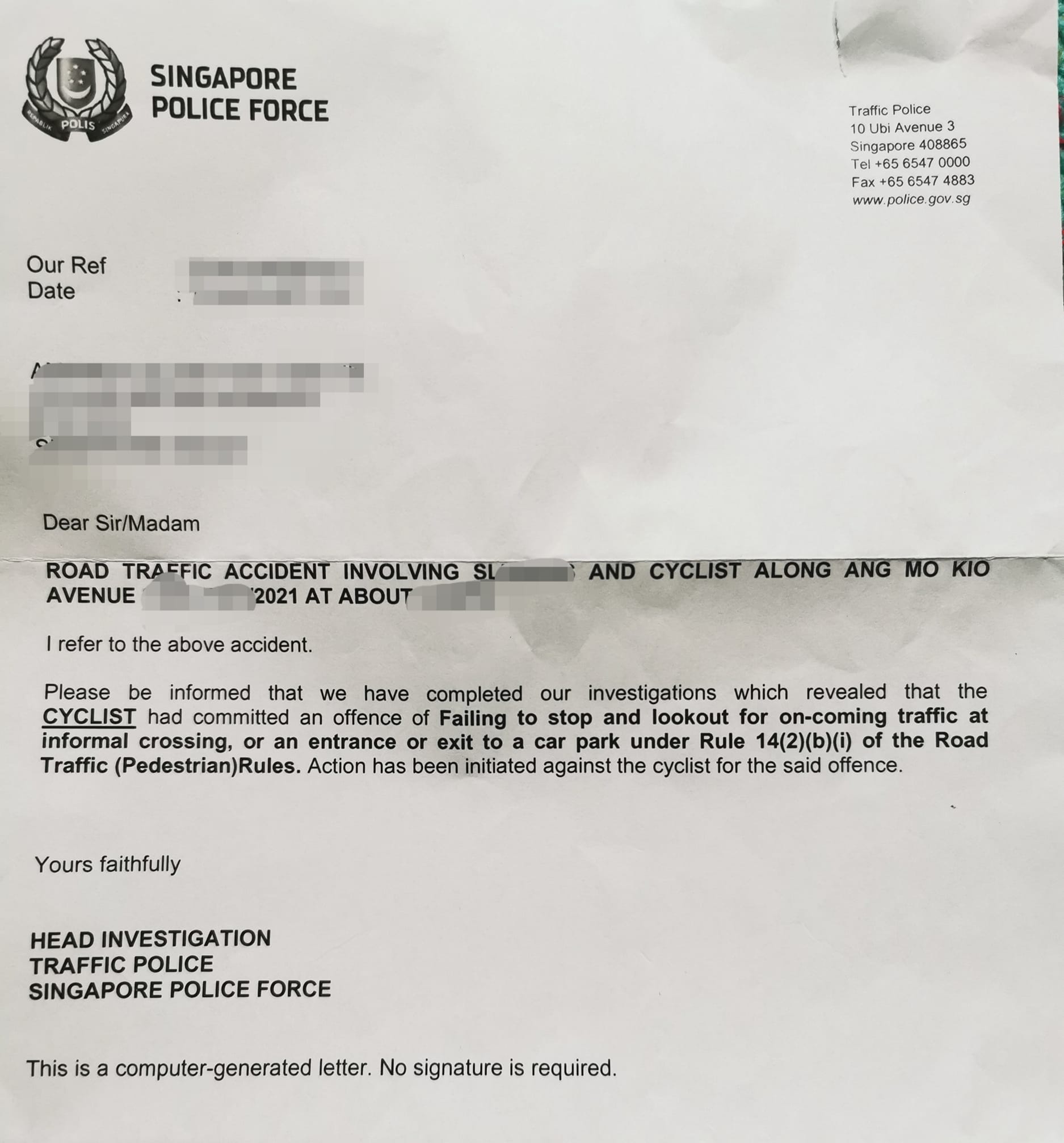 After the experience, the driver decided to share his story to encourage other drivers to lodge a police report right away when such incidents happen.

He added that his experience also changed his mindset as he often thought drivers were automatically at fault when they got into an accident with a cyclist.

Lodge a police report when an accident occurs

When accidents occur, victims have the tendency to point fingers at one another while insisting on their innocence. During such time, having dashcam or CCTV footage would be immensely helpful to prevent wrongful accusations.

More importantly, victims should lodge a police report as well so that authorities can launch a thorough investigation and get to the bottom of the incident.

Hopefully, all road users can be more careful on the road to avoid putting their lives, and the lives of others, at risk.