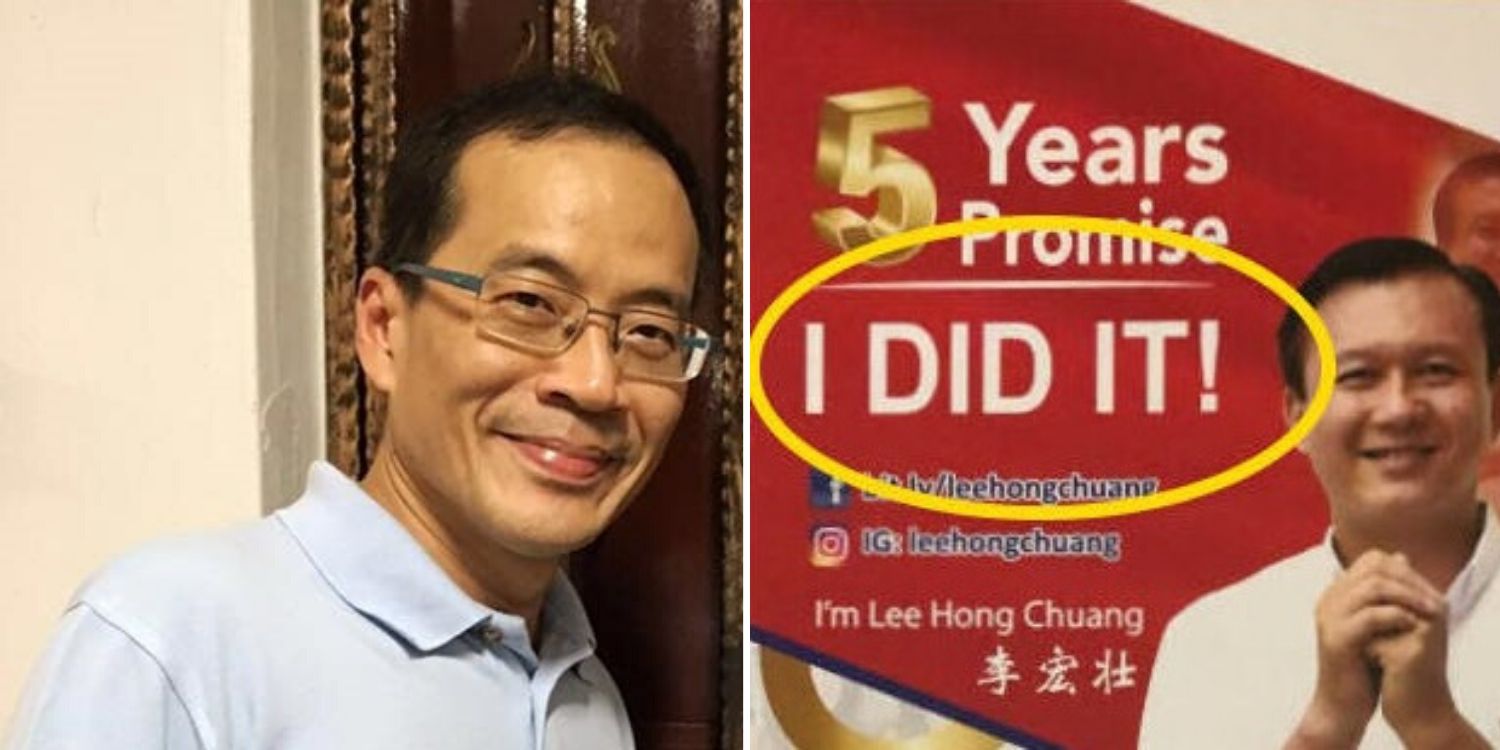 The battle for Hougang Single-Member Constituency is shaping up to be another “he said, he said” saga as Polling Day draws near.

The Workers’ Party (WP) stronghold since 2001 is now being contested by WP candidate Dennis Tan, and he has accused his People’s Action Party (PAP) rival of trying to “claim credit” for upgrading programmes in the SMC in his election flyers.

As evidence, he pointed to Mr Lee Hong Chuang’s bold claim of “I did it” in his election flyer that mentions the upgrading programmes. 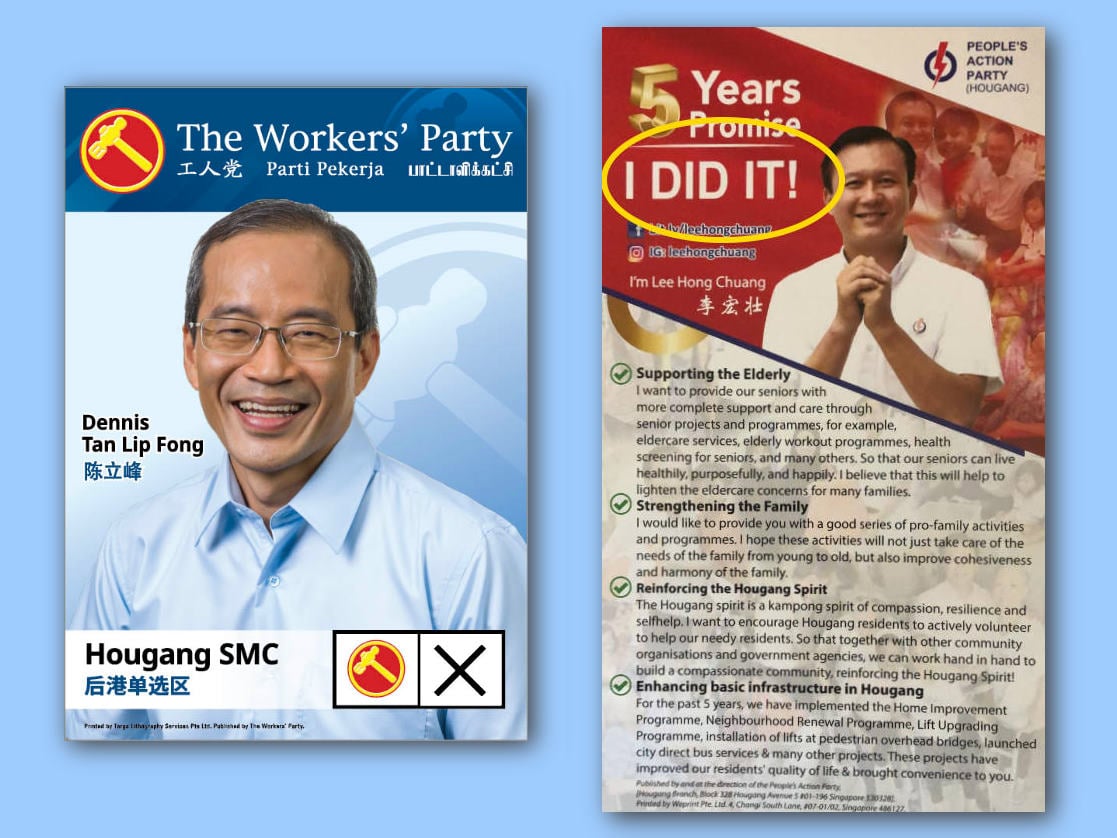 From the image, we can see that the purported election flyer from Mr Lee has an image of his face and the words “I DID IT!” that feature very prominently.

Above these words, it also says “5 Years Promise”. It may refer to the last 5 years between now and the 2015 General Election, where he lost to the WP’s Mr Png Eng Huat.

Further down in the flyer, we see that the last point that is bulleted with a “tick” refers to “Enhancing basic infrastructure in Hougang”. The flyer appears to claim that Mr Lee’s team has implemented project like the Home Improvement Programme and the Neighbourhood Renewal Programme (NRP).

NRP is led by Town Council

In a Facebook post on Monday (6 Jul), Mr Tan clarified that the NRP isn’t implemented by Mr Lee, but by the Aljunied-Hougang Town Council (AHTC), which is led by the Hougang MP.

Mr Tan, who has been a Non-Constituency MP in Parliament since 2016, also said that this isn’t the first time that Mr Lee has tried to claim credit for upgrading programmes in Hougang. 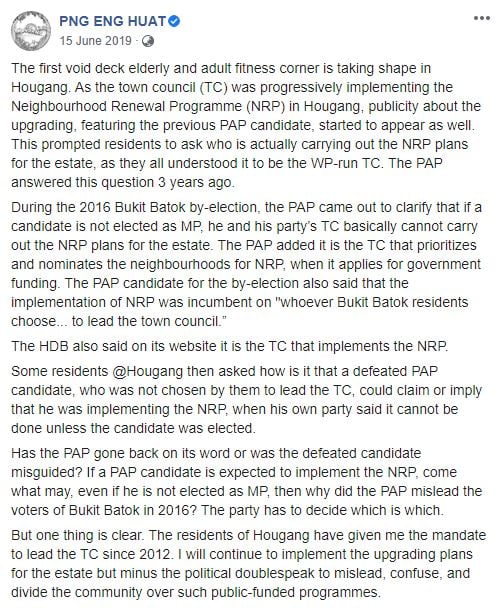 In the post made more than a year ago on 15 Jun 2019, Mr Png said explicitly that AHTC is responsible for the NRP, and it was building the first void deck elderly and adult fitness corner in Hougang.

However, at the same time, Mr Lee also released publicity over the NRP, confusing residents who wondered who was actually carrying out the upgrading, the AHTC or the PAP? According to Mr Png, some Hougang residents even asked how come a defeated candidate can say that he was in charge of the NRP when he was chosen by them to lead the Town Council?

Mr Png pointed to a purported statement made by the PAP during the Bukit Batok by-election in 2016.

The statement attached by Mr Png says that it’s the Town Council that nominates neighbourhoods for NRP.

Also, if a candidate isn’t elected, his party’s Town Council can’t carry out the NRP for the constituency in question. 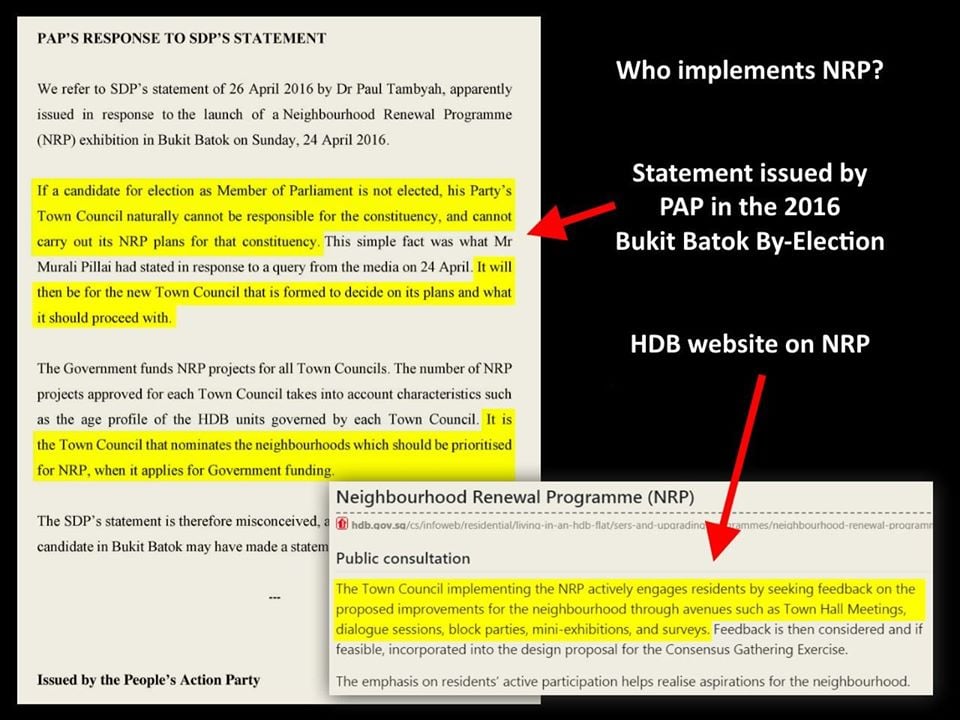 Mr Png also attached a purported screenshot of the HDB website, which appears to say that the Town Council implements the NRP.

Hougang residents have gotten over $300 million in upgrading

He said that Hougang residents had enjoyed more than $300 million in upgrading under the various schemes including the NRP.

This is compared with the PAP’s dangling of a $100 million upgrading plan in 2006, he added. 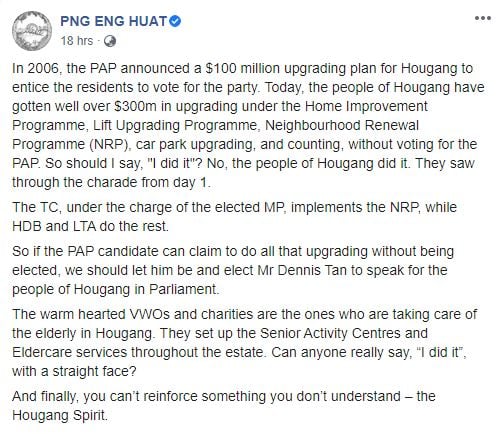 Thus, he questioned how Mr Lee’s flyer can say “I did it” regarding the upgrading.

As for the claim in Mr Lee’s flyer that he would like to support the elderly, Mr Png said voluntary welfare organisations and charities are taking care of the elderly.

Lastly, on the claim in Mr Lee’s flyer that he wants to reinforce the Hougang spirit, Mr Png said,

you can’t reinforce something you don’t understand.

In his most recent Facebook post on the saga, Mr Tan posted photos to prove that 3 MPs were deeply involved in the plans for NRPs across Hougang – Mr Png, former Alunjied MP Low Thia Khiang, and Mr Tan himself.

Mr Tan said the 3 men attended monthly meetings between the Town Council and contractors to supervise the NRP projects. 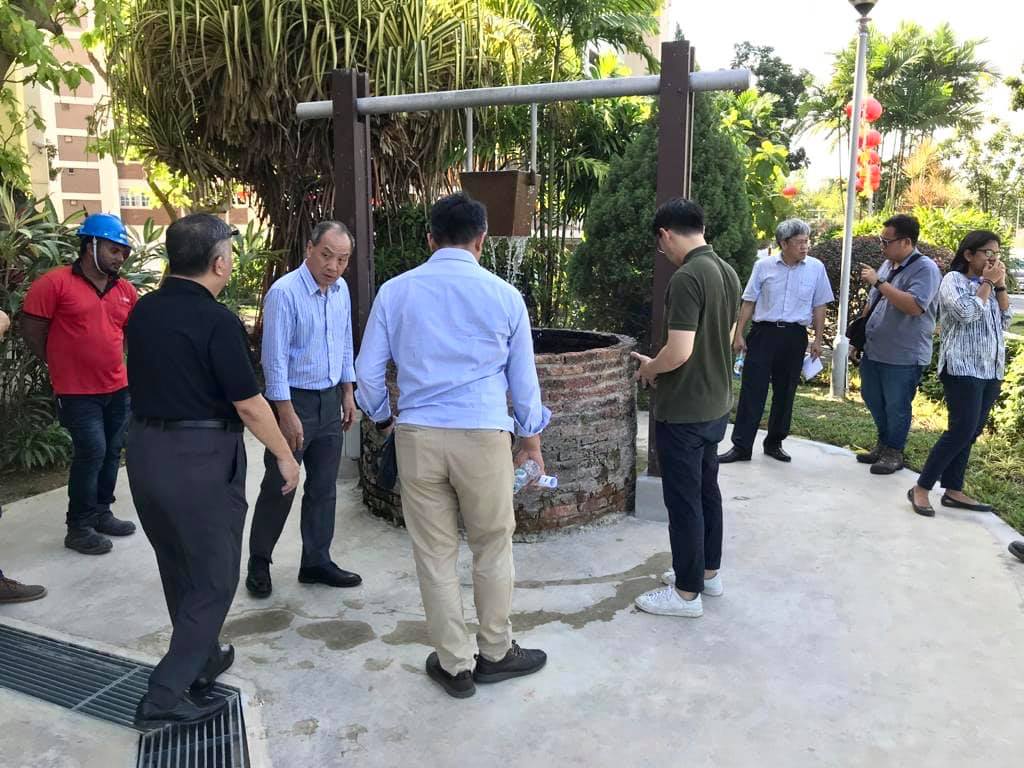 They would also regularly check on the projects’ status with contractors and consultants, he added. 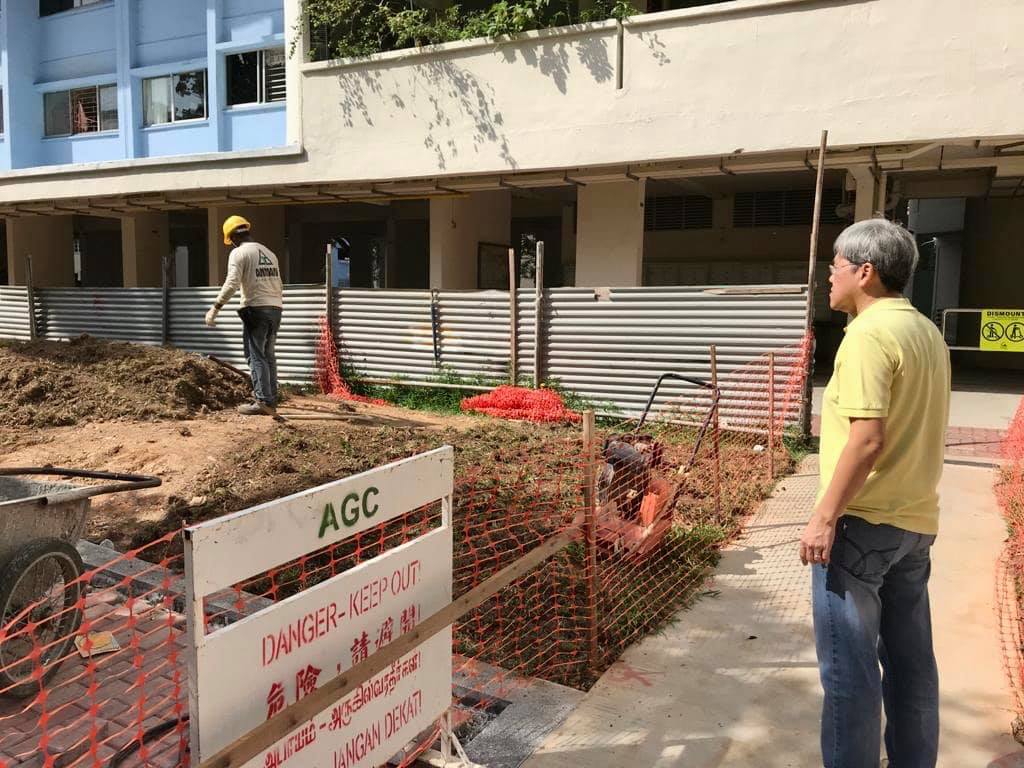 He emphasised again that AHTC is implementing the NRPs in Hougang.

Thus, the Town Council is responsible for the works being on schedule and being accountable to residents, he said. 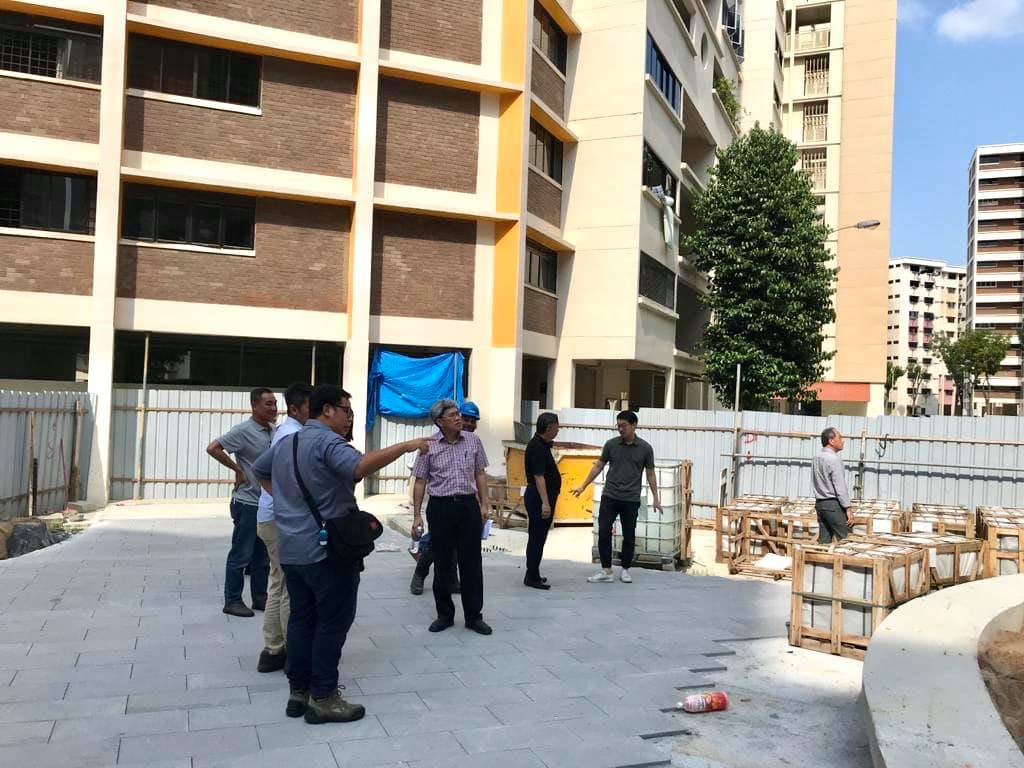 While Mr Lee has remained silent on the issue so far, Mr Tan and Mr Png are adamant that his flyer contains claims that are untrue.

MS News has reached out to Mr Lee for his response to the allegations. We’ll update you when he gets back.