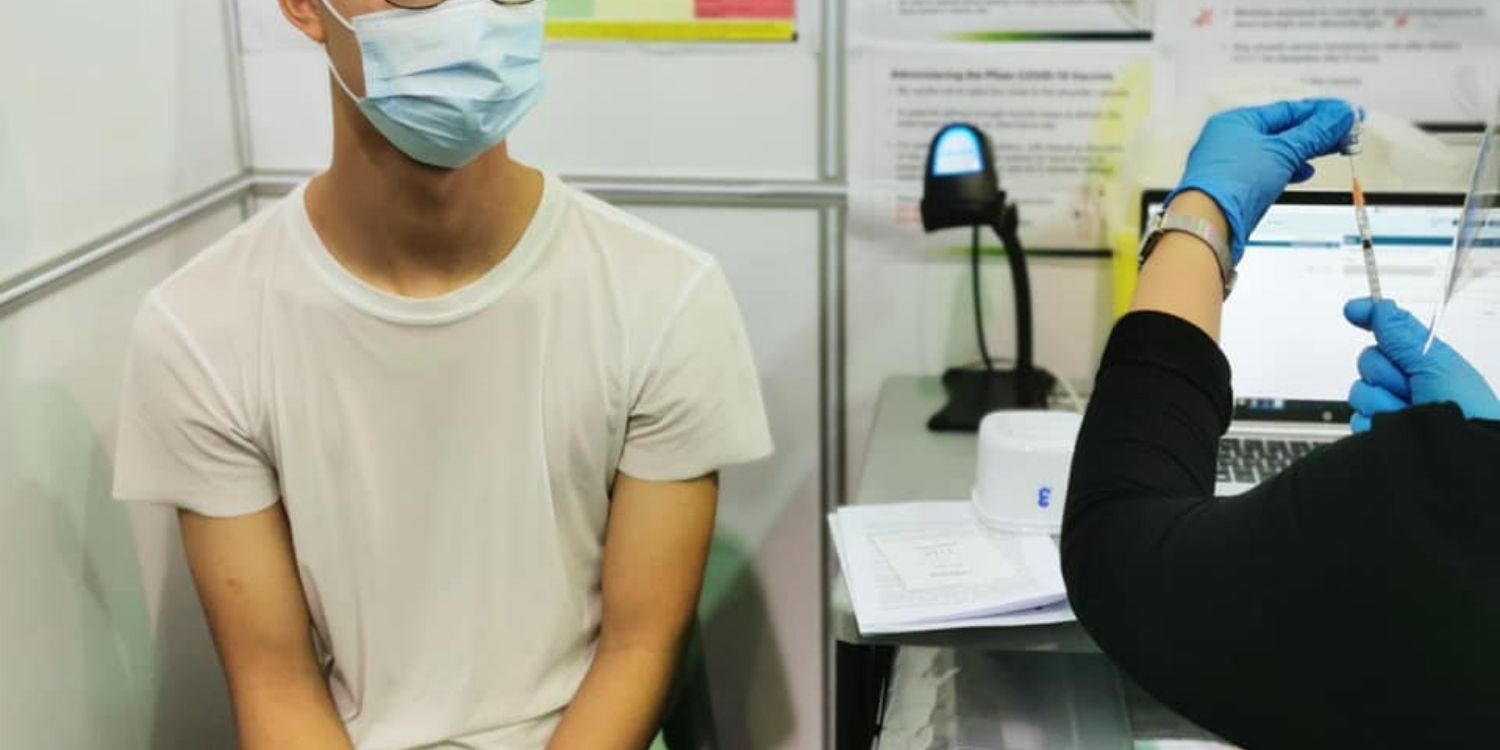 Singapore’s vaccination exercise is in full swing, with students above the age of 12 able to get their jabs from 1 Jun.

However, some people are still wary about the potential effects of vaccines on children, especially after negative news from abroad.

For this reason, 5 doctors have written an open letter urging for a delay in the vaccinations of male students. A petition calling for the same thing has also been started, apparently by some parents.

On Saturday (26 Jun), a Dr Kwang Po Kho posted an open letter on Facebook addressed to the Expert Committee on Covid-19 Vaccination.

The 14-member committee, chaired by Associate Professor Benjamin Ong from the Ministry of Health (MOH) and the National University of Singapore (NUS), makes recommendations to the Government on Singapore’s vaccination strategy. 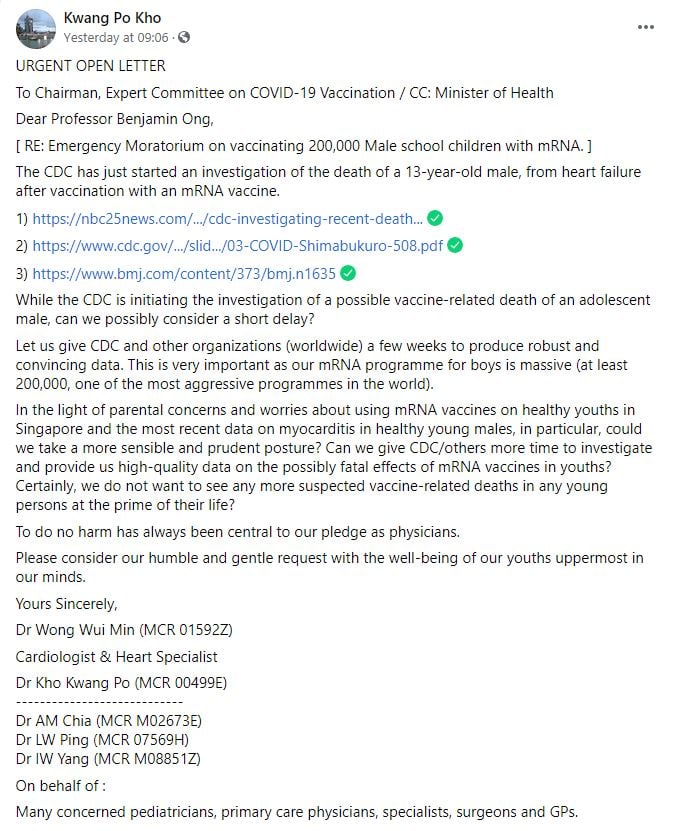 Besides Dr Kho, a cardiologist, the letter was also signed by 4 other doctors:

They said they were writing it on behalf of “many concerned” doctors.

13-year-old US boy reportedly passes away after vaccination

The letter referred to the recent news in the United States of a 13-year-old boy who passed away 3 days after getting his 2nd dose of a Covid-19 vaccine.

The sad news was reported widely by US media, including NBC News and ABC News.

The US Centers for Disease Control and Prevention (CDC) is reportedly looking into the case.

However, the US Food and Drug Administration (FDA) has already added a warning to vaccines as a result.

They’ve said that there’s an increased risk of myocarditis and pericarditis – inflammation of the heart muscles and lining respectively – particularly after the 2nd dose.

In Singapore, MOH has also warned that young men have a higher risk of heart inflammation after the 2nd dose of the mRNA vaccines.

4 Singapore males aged 18-30 have suffered mild myocarditis and pericarditis after their 2nd dose.

Both vaccines used in our national vaccination programme, Pfizer and Moderna, are mRNA vaccines.

As of 21 Jun, Singapore has given out more than 5 million vaccine doses, with 2 million having received both doses.

In light of these developments, the letter asks the committee to “possibly consider a short delay” to the Ministry of Education’s (MOE’s) vaccination programme. 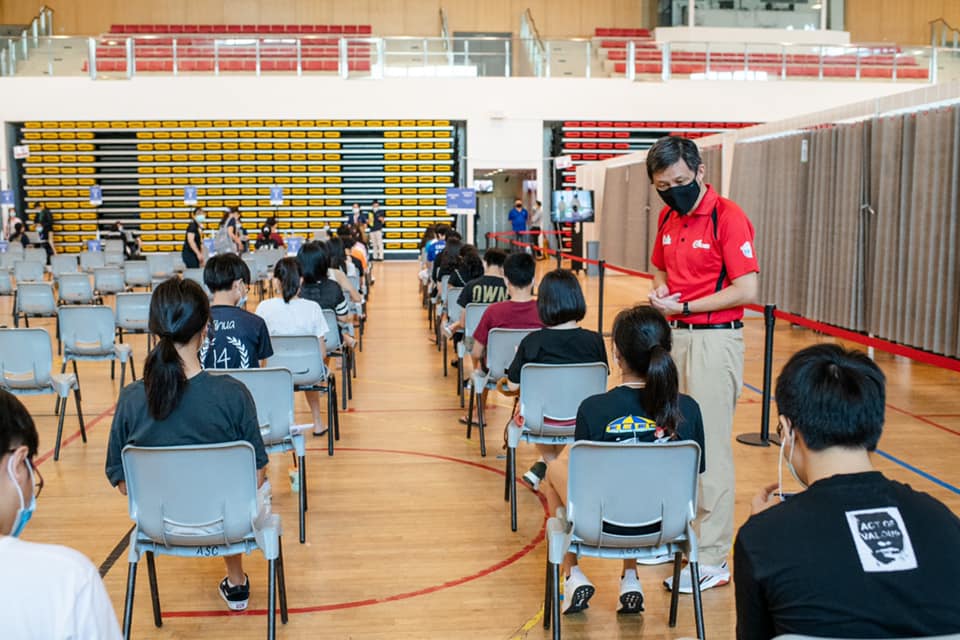 It will allow the CDC and other global organisations to investigate the effects of mRNA vaccines in young people, and produce high-quality data.

This would be a “more sensible and prudent posture”, they said, adding,

Certainly, we do not want to see any more suspected vaccine-related deaths in any young persons at the prime of their life?

The letter estimates that the current vaccination exercise involves some 200,000 male students, though it hasn’t been made compulsory yet.

Besides doctors, some parents have also called for the suspension of vaccinations for those under 30 years old, especially children aged 12-15.

A petition on ipetitions, apparently started by a group of parents, also cites the death of the US boy.

Like the doctors’ letter, it’s addressed to the Expert Committee and Health Minister Ong Ye Kung. 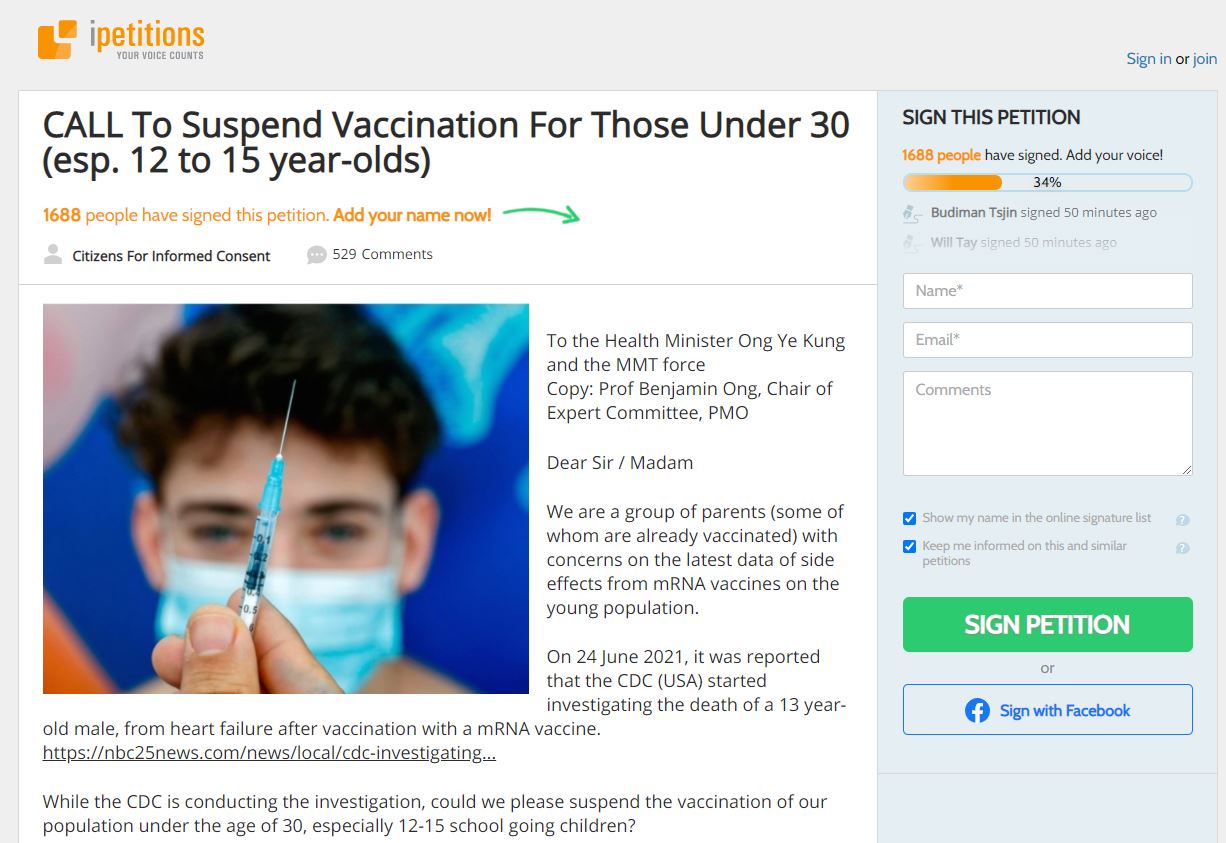 Reasoning that many young people have already had the 1st dose of the vaccine, the petition says that should be enough protection till we wait for data from the US.

In Apr, MOH had clarified that an 81-year-old man who passed away after getting the vaccine had died from heart disease, not the vaccine.

S’pore Man Passes Away After Covid-19 Vaccination, MOH Says Heart Disease Is Cause Of Death

Also, in Apr, a 48-year-old man reportedly suffered 3 strokes after getting his vaccination, but Changi General Hospital (CGH) said preliminary investigations found his condition was not caused by the vaccine.

Director of the National Centre for Infectious Diseases (NCID) David Lye has also warned against fake science and anti-vaccine groups.

In a Facebook post on 7 Jun, he expressed his worries over seeing messages and petitions about not using the mRNA vaccines on teenagers.

It’s up to the individual to decide

As mRNA vaccines for Covid-19 have been around for only more than 1 year, it’s not surprising that people may be sceptical.

This is especially when it comes to the vaccination of young people, who still have a long way to go in their lives.

As there’s lots of information going around, it’s really up to the individual to decide whether they want to get the vaccine or not.

We can only hope that either way, we won’t see more needless deaths.