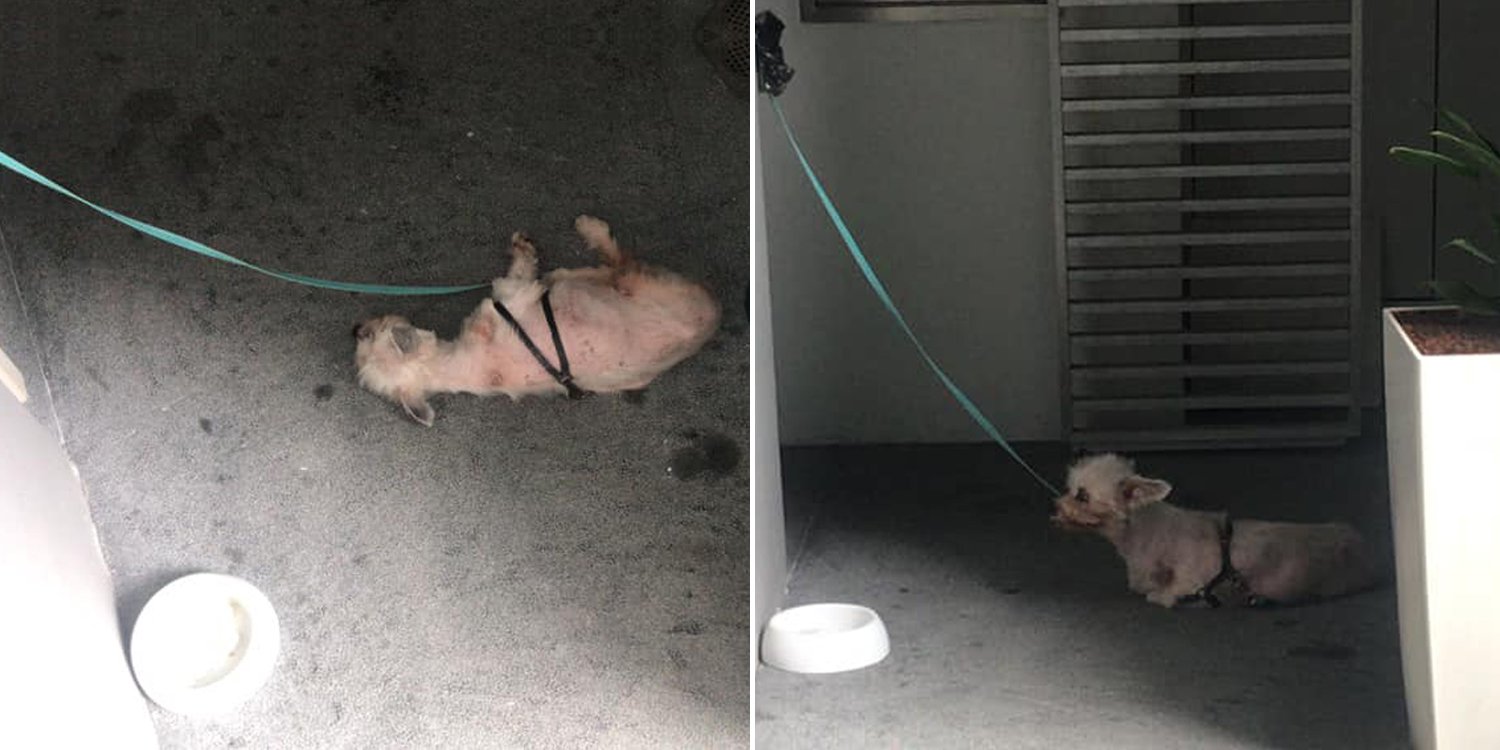 UPDATE (6 Dec, 10.55am): SPCA is currently investigating, while AVS has visited the unit to advise the owner. The article has been updated to reflect the latest development.

While people say dogs are men’s greatest gift, apparently not everyone thinks so.

A woman shared the heartrending sight of a poor elderly dog apparently tied to a short leash and neglected at the corridor in a Facebook post on Wednesday (4 Dec).

According to post, she spotted the heart-wrenching sight of the dog at a condo in Holland Village.

Holland Village elderly doggo kept outside with only bowls of water

Judging from the attached photos, the elderly dog is tied to a light blue leash that’s only just a little longer than the length of its body.

According to the lady in the video, the dog is only given bowls of water, which looks like his only form of sustenance.

As if that’s not bad enough, the dog also appears to be balding throughout his entire body.

Even though we’re not certain about the cause, but a quick search online suggests that dogs normally bald because of flea infestation. Poor thing.

At 4pm, this netizen apparently went back to check on the doggo. She related that she saw a helper bringing the dog back into the apartment.

She then assumed that this happened only because the helper noticed the doggo and her were being “spied on”.

The netizen also alleged that she spotted another “fluffy white dog” roaming freely in the house.

Dismayed, she said that it looks like the corridor was a permanent living space for the elderly doggo.

When the post went viral, many animal lovers were appalled to find the dog living in such conditions.

They started tagging animal welfare groups and even the Animal & Veterinary Service (AVS), urging them to help.

Society for the Prevention of Cruelty to Animals (SPCA) executive director Dr Jaipal Singh Gill said that they are aware of the case and currently investigating.

They have also received word that AVS has visited the unit to advise the owner.

SPCA is against the practice of leashing or caging of dogs for prolonged periods as this is detrimental to the welfare of the animal. Dogs should be kept free roaming in the home.

Speak up against abuse cases

It’s heartbreaking to see pet abuse cases resurfacing time and again. And as pets, they are left helpless, unable to fend for themselves.

We would like to urge Singaporeans to speak up whenever you come across similar pet abuse cases — this is probably the best thing we can do for them.