Elderly Buskers Surprised By Viral Fame, Hope To Spread Joy With Their Songs 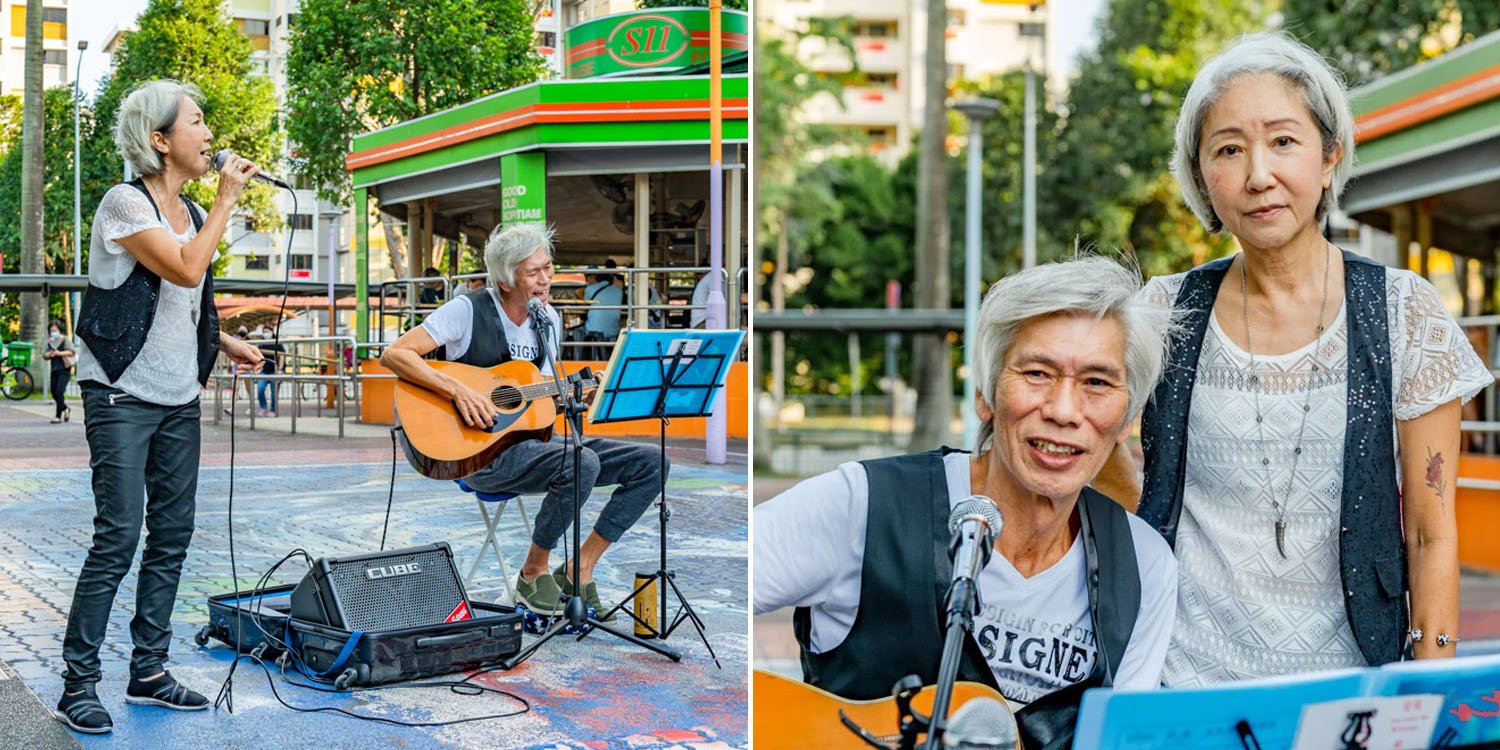 They're not doing it for the money.

When we think of buskers, an immediate image comes to mind: a lone individual, usually middle-aged or older, serenading people with classic songs outside a mall or close to an MRT station.

While that is true of many cases, a recent viral TikTok of two elderly buskers performing like the entire world was their stage captivated passers-by and TikTokers alike.

The duo, who are actually neighbours who live a block from each other, did not expect their gig to go viral. In fact, it was actually their first performance as a pair, and they don’t use Instagram or TikTok. 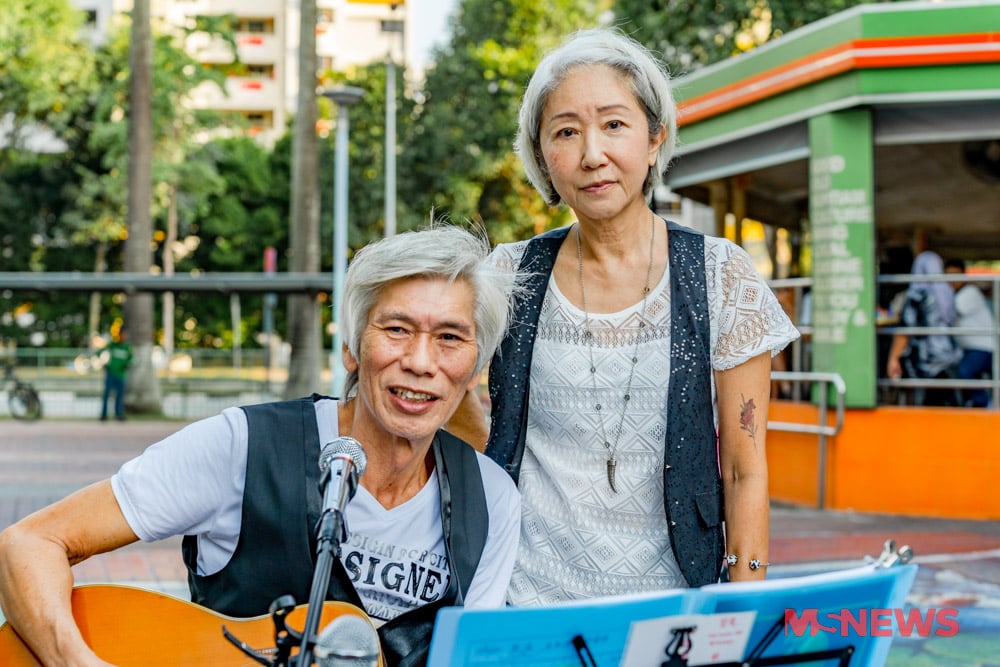 But since then, they’ve steadily gained loyal fans who follow them everywhere to hear them perform.

Davidson Teo Khiam Huat, 63, and Gillian Goh, 67, collectively known as “Silver Hype” for their silver locks, sat down with MS News for an interview and told us about their busking origins, how they first met, and their motivations.

Idea to busk came “at random”

The elderly buskers’ friendship spans more than 30 years, having met at work while they were both at the same insurance company.

Since 2012, they have been retired, but because they live in the same neighbourhood, they’ve continued to keep in touch.

But the idea for busking came “at random” while Mr Teo was talking to a friend last year. “(My friend) wanted to do busking, but to get a busking licence, you need to be able to play an instrument.”

Coincidentally, Mr Teo can play the guitar, having learned when he was young.

Since he could sing and play the guitar, he decided to give busking a go. The process went swimmingly as he passed the audition held by the National Arts Council (NAC).

Ms Goh came into the picture later as one of Mr Teo’s logistics helpers, along with his brother. But with her passion for singing, it was inevitable that she’d eventually join in. 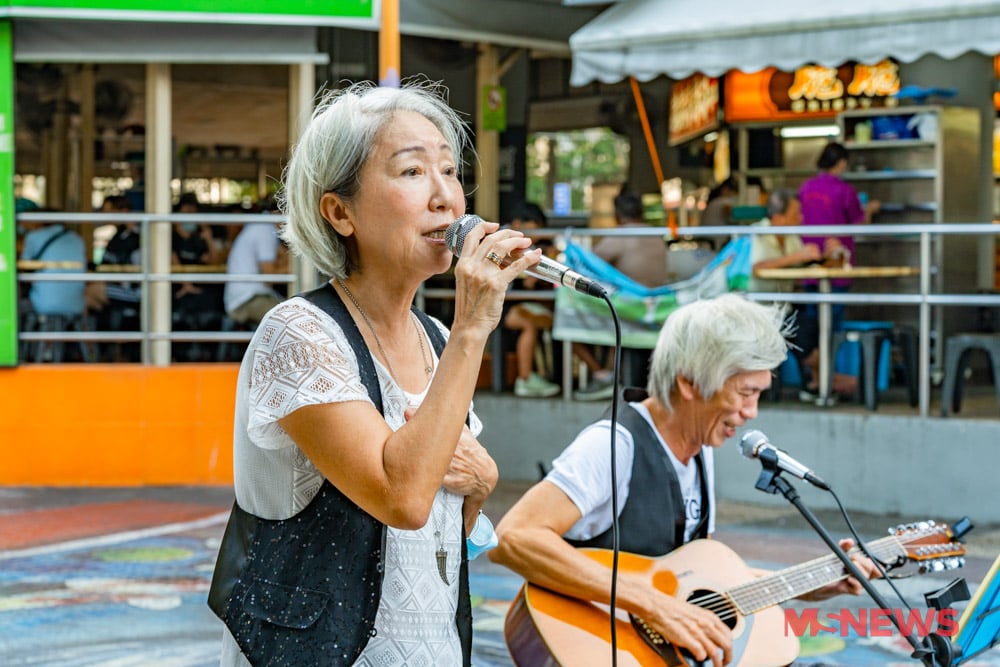 One day, Mr Teo suggested, “Why don’t you apply (for a licence) together, then we can sing?” He also wanted to give Ms Goh a sense of purpose after her younger sister, 55, had passed away from cancer.

As Ms Goh had taken care of her before her passing, she felt down in the dumps for a while. Mr Teo was confident that singing in public would help lift her spirits.

After several weeks of practice at Ms Goh’s home, they finally made their debut at Hougang Mall in June this year.

On that fateful day, a passer-by filmed them and posted their performance on TikTok, which went viral with over 153,000 views to date.

“Surprised” is perhaps the best word for their reaction. They confessed that they still have no idea whether their viral fame was good, having been caught completely unawares.

Their reaction became more understandable when they spoke about their motivations. As Ms Goh related,

When we sing, we make others happy. People in the neighbourhood listen.

Ms Goh also noted how the songs they sing are not “very old”, as most are from the 90s and later. 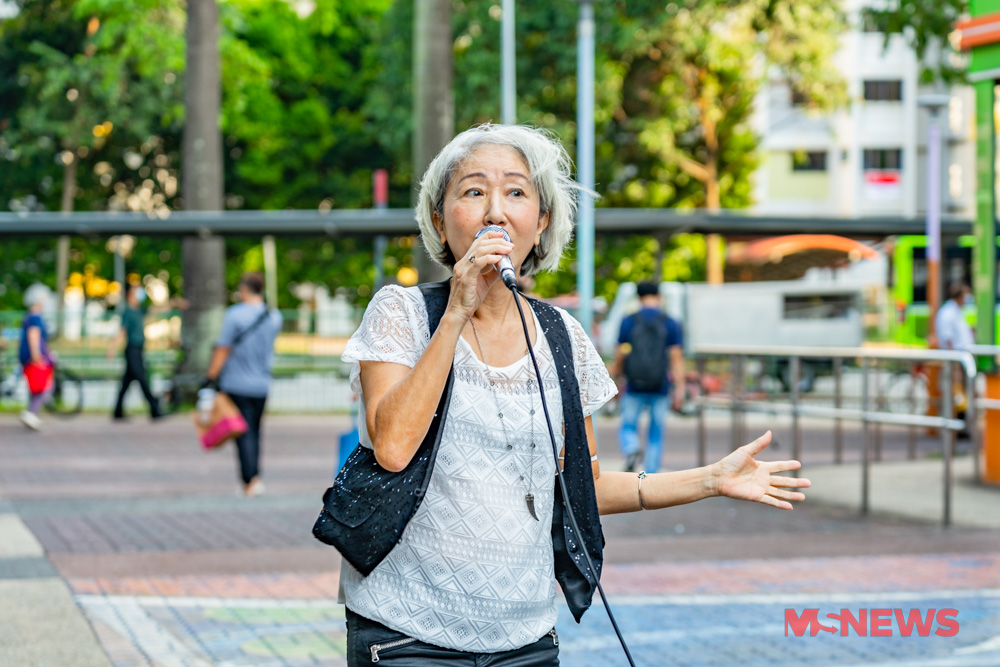 YouTube is a go-to for the pair to look up music they can perform. However, they will not just play any song because it’s popular. For example, they have rejected song requests that they have not learned or cannot play to a high level.

Such is their dedication to their craft that Mr Teo even said any amount of money they receive is immaterial, as long as they receive a token of gratitude.

He spoke of a time when he performed at Ang Mo Kio, someone came up to him and tipped 5 or 10 cents but apologised for tipping such a “low” amount.

“It’s okay,” Mr Teo told him. “As long as you put a token, I’m happy. The amount you give is not important.”

Mr Teo even uses some of the money he gets from busking to compensate his brother for his help shifting their busking equipment. By their own admission, things haven’t changed significantly since the buskers went viral.

But there’s definitely been more thought put into the package. At one such performance in Ang Mo Kio that MS News went down to, they were dressed in matching black vests and white shirt ensemble, in contrast with their plainer attire during their first duo performance in Hougang. 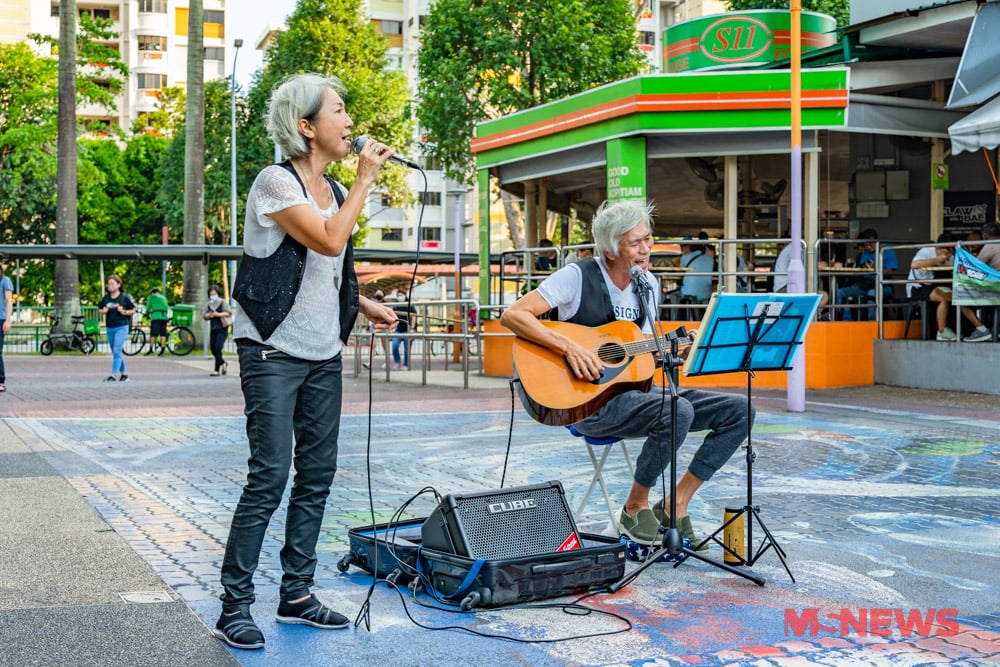 They have gained some loyal fans too, one of whom even travelled all the way from Yew Tee to Changi Village – a journey that takes almost 2 hours by train – just to watch them.

Others will also ask the pair when their next performance will be.

Along with the fans, there are also signs of competition.

“Sometimes, we see other buskers at our performances. I think they want to figure out the songs we sing so they can use that for their performances.”

But that’s not a bad thing.

Besides popular songs, Mr Teo is also a budding composer who wrote a whopping 17 songs during the pandemic, with lyrics based on his life experiences.

He has also composed songs for his good friend, Hokkien singer Xiao Hei.

His experiences performing at getai events have helped him out in his busking and song composing, as he learned Chinese notation that way. 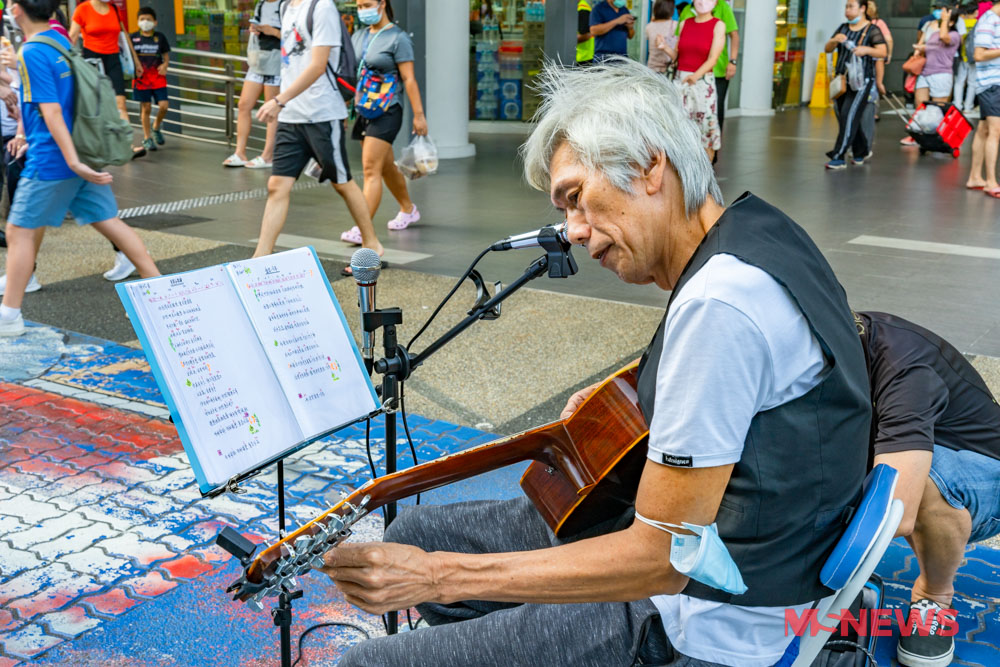 As Mr Teo and Ms Goh are retirees, they do not make a living from busking. But performing twice or thrice a week gives them something to look forward to.

Before Mr Teo began his busking, he asked his daughter, who’s a teacher, whether it would affect her at work. She was supportive.

“You should go busking because it’s an art,” she told him. “(At) your age, you should do all these things that make you happy.” While Mr Teo professes that he can’t play for as long as he’d like as playing the guitar for too long hurts his fingers, they still try to perform at least twice or thrice a week, all because they enjoy it.

Grateful to NAC for regulating buskers

Unlike what we have now with NAC’s Busking Scheme, busking used to be unregulated, and buskers could perform anywhere they liked at any given time.

Hence, it’s natural that concerns for elderly buskers arose, as this particular group of performers would need more time to get used to the current online system and licence application.

The buskers actually face some difficulties with the online booking system. Not only are they not familiar with computers, they also find that popular spots are snapped up the moment they are open.

However, these two elderly buskers are grateful to NAC for ensuring that buskers are licensed and bringing busking to a broader audience, even though it can be difficult to secure bookings at popular spots like Paya Lebar and Orchard Road online.

While the online booking system has its flaws, it allows any busker to secure a spot for the day instead of fighting with others since they are pre-booked.

“Hopefully, NAC understands the meaning of us busking — that it also helps the arts scene in Singapore. It’s very important that the standard of busking, especially in places like Orchard Road, is high because it is what tourists see while walking around,” Mr Teo said.

I hope what we are doing will bring up the busking industry.

If you’d like to catch Silver Hype’s next performance, check out the NAC website for updates. They have no social media yet, but that is in the works.

Passionate buskers perform to give joy to others

For some, busking may be a way of making a living. But for Mr Teo and Ms Goh, it’s more of a way to give joy to others by doing something they love.

It’s heartening to see their passion showing through during their performances, and we hope they’ll be able to continue spreading joy to their audiences.