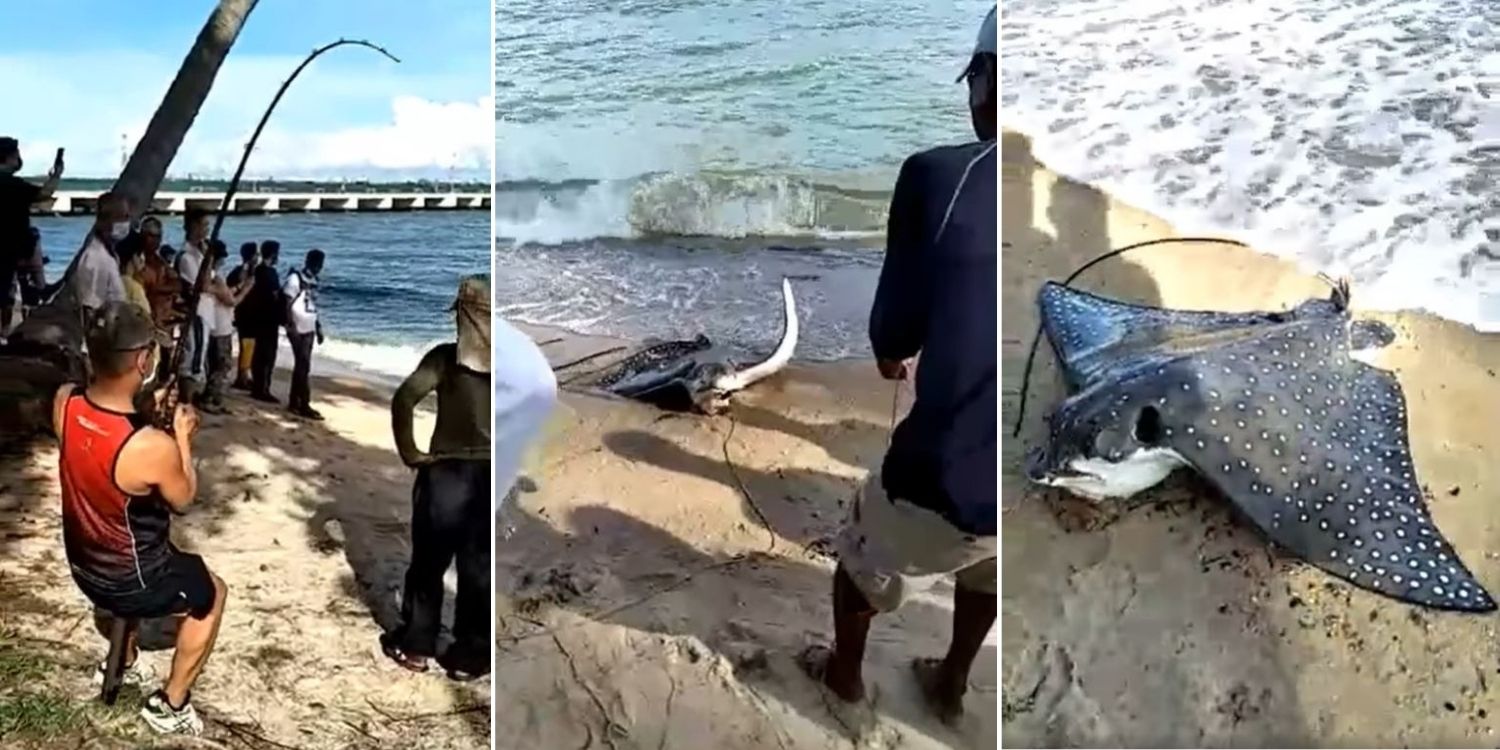 UPDATE (30 May, 4.49pm): In a statement to MS News, NParks director Karenne Tun said they encourage the public to be responsible while fishing recreationally.

This includes making use of more sustainable fishing methods like “catch-and-release” fishing, where fish are released back into the sea if they’re not going to be eaten. NParks has previously engaged anglers to promote this voluntary practice especially for juveniles, as well as endangered and threatened species.

The white-spotted eagle ray is 1 of the species included in this list, as it’s classified as “vulnerable” under the International Union for Conservation of Nature (IUCN) Red List of Threatened Species.
—

Since we can’t hang out at cafes any more due to the Phase 2 (Heightened Alert) restrictions, more people might be heading outdoors despite the hot weather.

Those who happened to be strolling at East Coast Park recently might have noticed many fishing at Bedok Jetty, a popular spot for that activity.

And they might also have come across some lucky anglers with huge hauls like this spotted eagle ray. 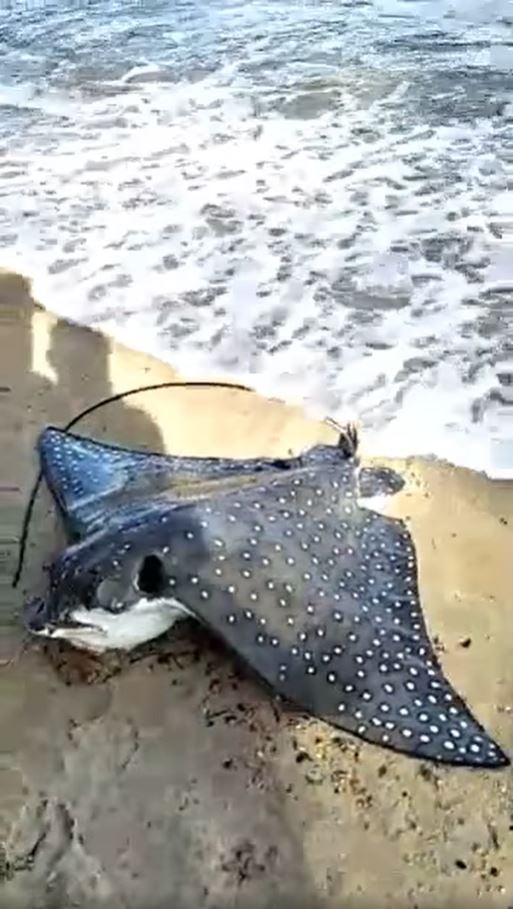 Though it’s a great catch, netizens who said it’s endangered urged for the creature to be released back into the sea.

The catch was recorded in a video uploaded on Friday (28 May) by netizen Raymond Khoo.

He didn’t indicate when the video was taken, nor if he took the video, but just said it’s a big catch in Singapore.

Nevertheless, the video accumulated more than 1,700 shares in almost 1 day.

Man hooks something big from beach

The clip started with a man standing on the beach, and he’d already hooked something big.

The man is obviously struggling to reel it in, and a crowd had gathered to watch the battle between man and fish. 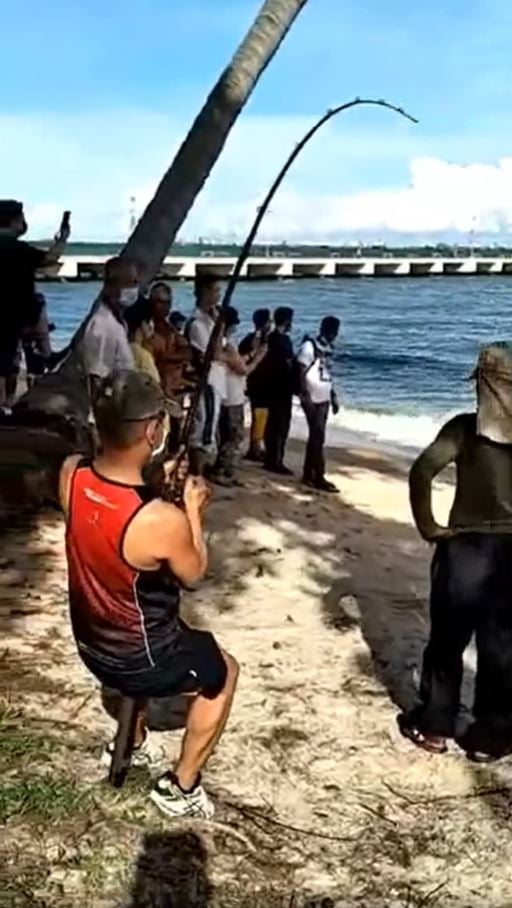 A jetty in the background of the video looks like Bedok Jetty, a popular angling spot in East Coast Park. 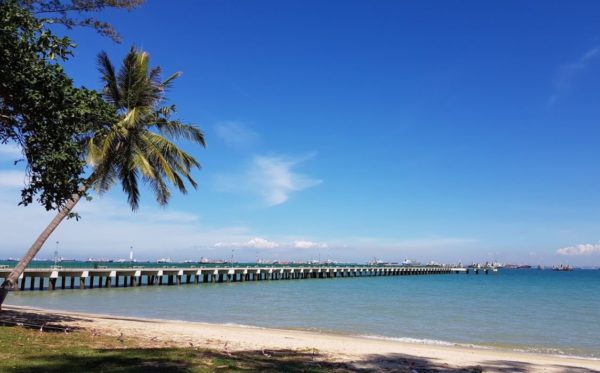 The man is possibly standing in the spot near the tree on the left.

As he and the people in the crowd are wearing masks, the video could’ve been taken in the recent past.

After a tussle of about 2.5 minutes in the video – which could’ve been longer in reality – the eagle ray is finally reeled onto shore, flapping furiously, to the amazement of the crowd. 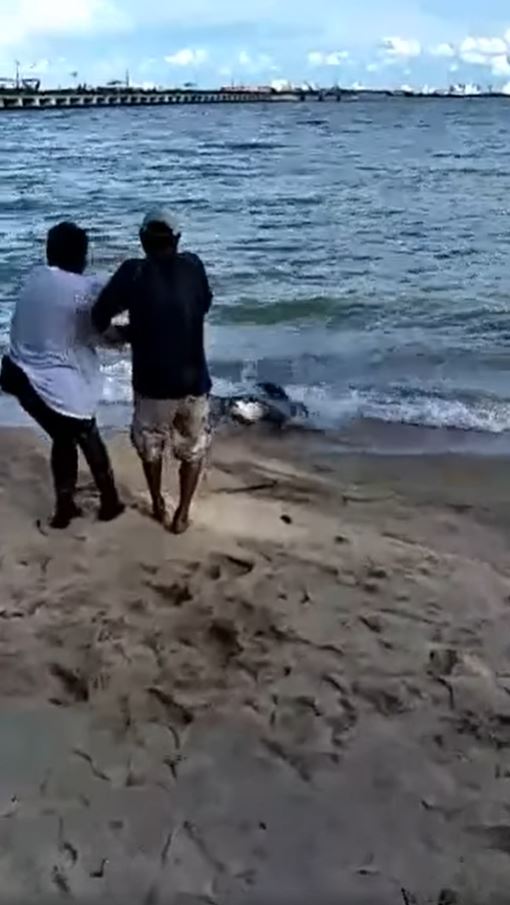 It takes a few people to pull it in, as it clearly struggles. 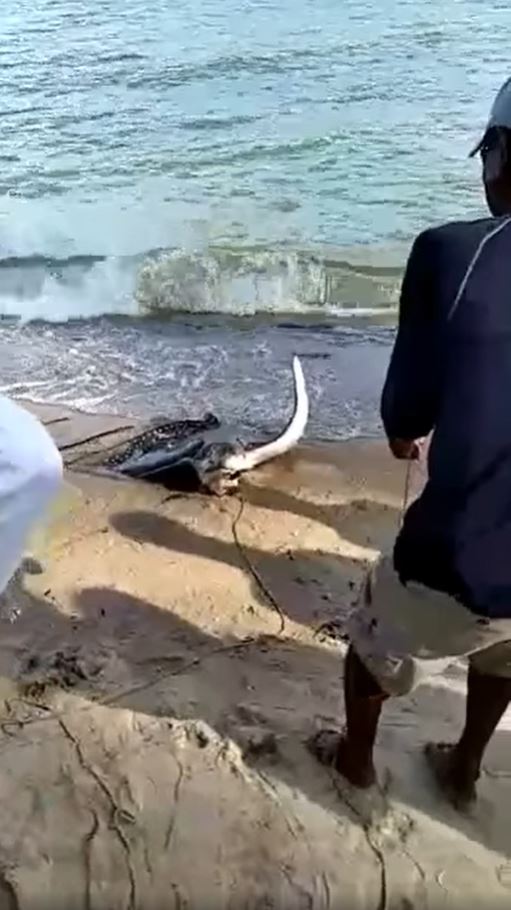 The video ends with the full extent of the creature revealed, including the distinctive spots on its back. 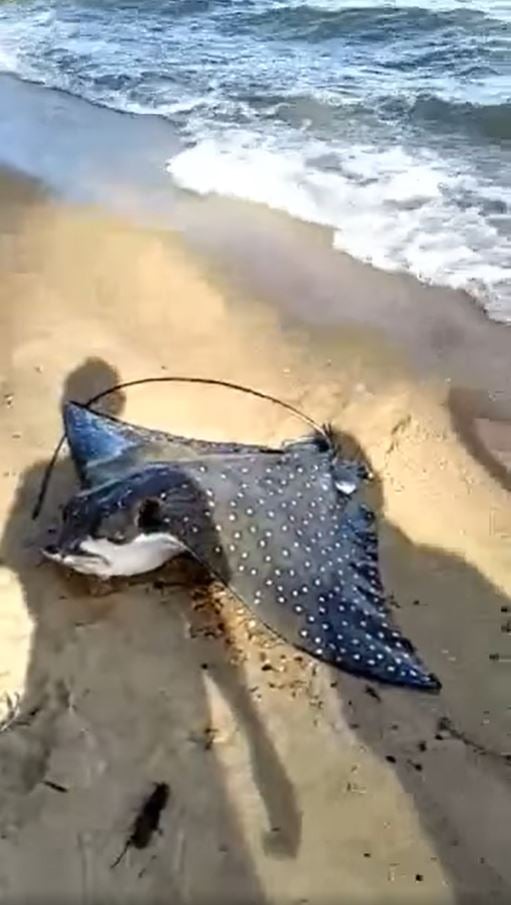 It lies on the shore gasping for breath, and its subsequent fate is uncertain.

Netizens hope it was released

Many netizens were amazed at the large haul, and said somebody would be having a large meal that night.

However, others urged the anglers to release the fish back into the sea.

They reasoned that the creature isn’t a common stingray that we eat, and should be released.

Some identified the fish as a spotted eagle ray, which is a threatened species whose population is going down. 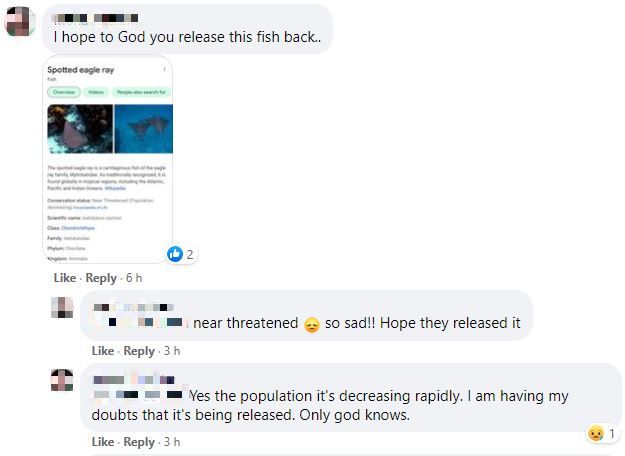 One sarcastically raged that an endangered species was “killed for fun”.

Speaking to MS News, the Animal Concerns Research and Education Society (ACRES) said they weren’t sure when or where the incident happened.

But they confirmed that the creature in the video was a species of spotted eagle ray called Aetobatus ocellatus. 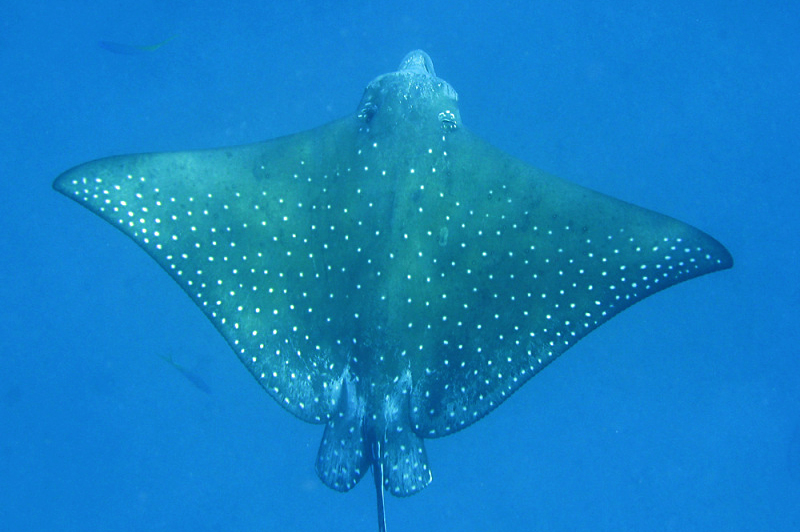 As some netizens correctly surmised, it’s a vulnerable species.

Species not protected in Singapore: ACRES

Unfortunately, people are free to catch this species of spotted eagle ray.

Apparently, only fish such as sawfishes, sea horses, devil and flying rays are protected.

ACRES noted that other islands like Bali are within the natural distribution range of the spotted eagle ray. Interestingly, Indonesia protects them by requiring anglers to release them after being caught. 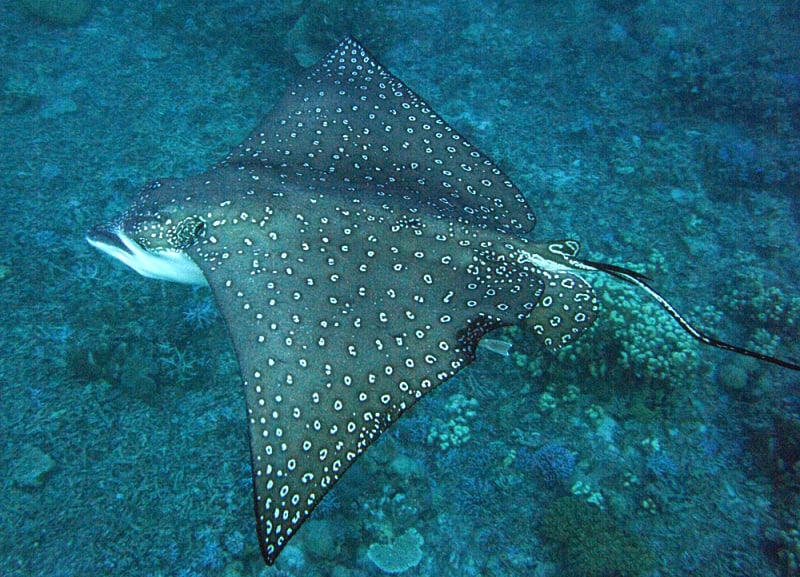 These animals are also not well studied yet in terms of species classification/identification and their threats.

Thus, it’s “unfortunate” that some countries that are within the natural distribution range of certain marine animals don’t protect them, ACRES added.

ACRES hopes the fish was released

Like many netizens, ACRES hopes the fish was released also.

As the law doesn’t protect it, they added,

(We) can only appeal to the compassion from fishing hobbyists to let them be.

MS News has reached out to the National Parks Board (NParks) for a statement regarding the incident.

While we share the amazement that the angler managed to snag such a large fish, we also know that he or his family won’t be able to finish eating the entire thing.

Thus, its capture is clearly not for the purposes of sustenance.

Since the spotted eagle ray is endangered, perhaps it would be best to release it back into the sea rather than cause its needless death.

As inhabitants of an island nation, we’re lucky that we’re surrounded by a source of food. But we also also protect marine life that’s vulnerable. If you’re unsure, you may contact ACRES at 9783 7782.

Do you think the creature should’ve been released? Do share your thoughts below.