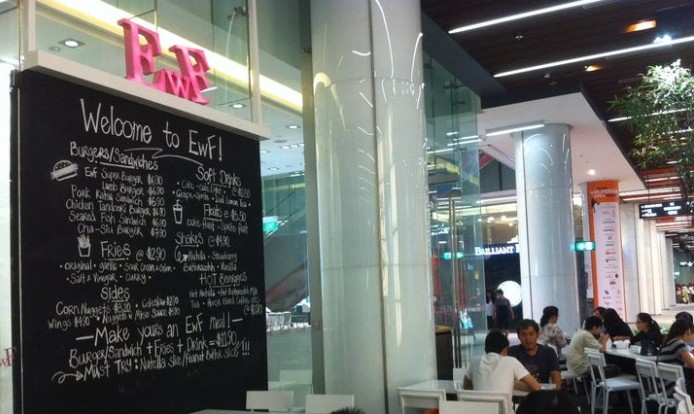 Tenants were given 6 months notice, and offered spaces at other malls

On Monday (14 Dec), a shade-filled poster that Orchard Central’s EwF outlet had put up for two weeks went viral.

The burger chain suggested that they had rode out the mall’s initial low period, and Far East Organization was kicking them out for a larger international retailer, given the Orchard Central’s relatively healthier shade of pink these days.

EwF, an offshoot of local chain Everything With Fries, also lamented their David-esque status, saying that “this is what SMEs suffer with their landlords all the time”. 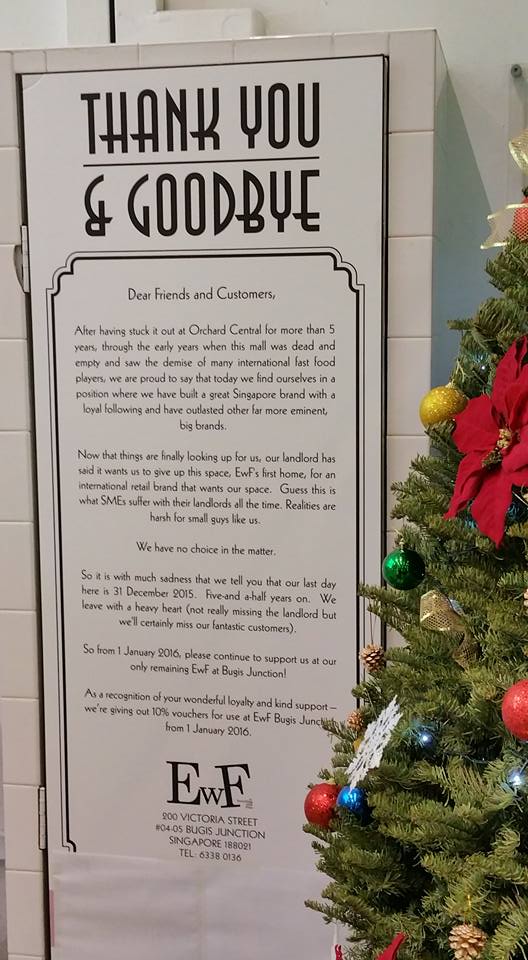 Everybody loves a good underdog story, and the EwF’s troubles with their landlord had netizens up in arms, with the story making headlines over Far East Organization’s perceived heavy hand.

In defence of Far East

As much as we love to hate bullies, we ought to take a step back and take a look at this case objectively. Is Far East Organization acting like the douchebags here? Or can the same be said about EwF?

Well, here’s what you don’t know.

EwF had 6 months to make alternative plans, but chose not to make any.

Tenants at Orchard Central were first notified of the mall’s upgrading plans in June 2015, with those affected being offered alternative spaces in other Far East Organization shopping malls.

Those affected, which is less than 15 per cent of the tenants, were offered to relocate within Orchard Central or to an alternative Far East Organization malls to ensure business continuity.

Far East Organization is a profit driven company, and they didn’t really have to offer these acts of goodwill to their tenants. Nonetheless, they played fairly and gave EwF prior notice and alternative spaces.

However, within this 6 month period, EwF chose not to take up the alternative.

EwF justified their decision, arguing that the other location offered was “not feasible”, and not in line with their concept.

But what of that poster?

According to EwF, “the poster was just to thank customers and not for publicity”. Basically, this invites netizens to support their cause against their landlord bully Far East Organization.

However, is what they say really true? Let’s compare their words against their actions.

Here’s the text in the poster in full:

After having stuck it out at Orchard Central for more than five years, through the early years when this mall was dead and empty and saw the demise of many international fast food players, we are proud to say that today we find ourselves in a position where we have built a great Singapore brand with a loyal following and have outlasted other far more eminent, big brands.

Now that things are finally looking up for us, our landlord said it wants us to give up this space, EwF’s first home, for an international retail brand that wants our space. Guess this is what SMEs suffer with their landlords all the time. Realities are harsh for small guys like us.

We have no choice in the matter.

So it is with much sadness that we tell you that our last day here is December 31, 2015. Five-and-a-half-years on. We leave with a heavy heart (not really missing the landlord but we’ll certainly miss our fantastic customers.

So from January 1, 2016, please continue to support us at our only remaining EwF at Bugis Junction!

As a recognition of your wonderful loyalty and kind support – we’re giving out 10% vouchers for use at EwF Bugis Junction from January 1, 2016.

Having been informed of the measure 6 months ago, EwF chose to place the moving-out poster one month before they had to vacate. Clearly, there was some reason for this last-minute notice.

The poster also tries to persuade customers to support their other branch at Bugis, by offering a 10% discount. [Informing customers of their closure] might inspire their loyal customers to patronise their Bugis location and other locations they might open in the future.

Featured Image via Facebook
With Reference to The New Paper, Channel NewsAsia, The Straits Times