As Singaporeans, most of us would have noticed an EZ-Link card function for seniors above our traffic light buttons.

For those who are unsure, here is what it looks like. 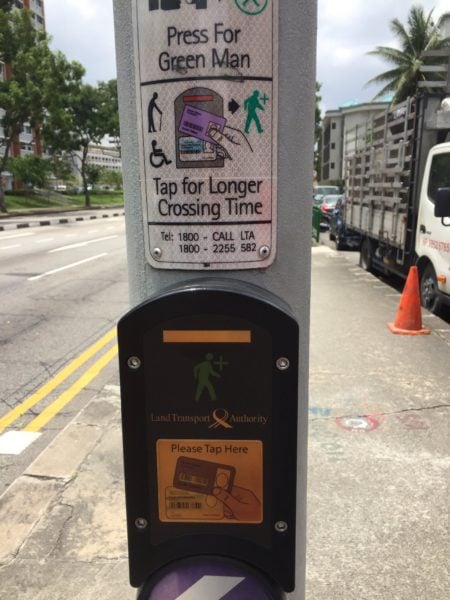 This function was specially made to cater to elderly who need a longer crossing time.

They can choose to extend the time of the green man by simply tapping their EZ-link card on the scanner.

An ABC Journalist named Stephen Dziedzic chanced upon this one day and tweeted about it on Friday (6 Sep).

The thoughtful tweet then went viral all around the world and has garnered 6,700 likes at the time of writing. 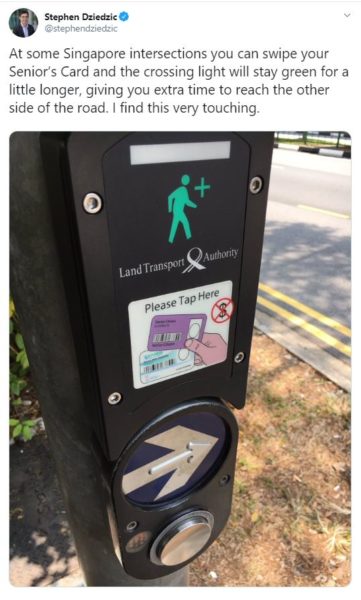 Along with a picture of the device, he added a thoughtful caption,

At some Singapore intersections you can swipe your Senior’s Card and the crossing light will stay green for a little longer, giving you extra time to reach the other side of the road. I find this very touching.

After the tweet was posted, many netizens hailing from all over the world – America, Canada, Japan & Germany – commented on how “thoughtful” this function was.

Some even said that they would like to see it implemented in their countries too.

This netizen was so amazed by the function and said that it is “Needed in Adelaide”.

Similarly, someone chimed in on the thread and requested for it to be available in Japan too.

Another Twitter user also shared that this wonderful idea would be great in Germany as elderly & people with disabilities often have to “speed up to cross” the roads in time.

When a Canadian author retweeted this, a netizen also commented that this is a “brilliant innovation”, further praising the ABC reporter for highlighting it on Twitter.

Little things matter the most

But what’s more important is the thought put into the system, to help Singaporeans from all walks of life.

A prime example would be this EZ-link card system created for the elderly that many citizens around the world hope to see built in their country.

With that, may we continue to count our blessings and keep striving to make Singapore a more inclusive place for all.

Feature image adapted from Twitter and Ministry Of Transport. 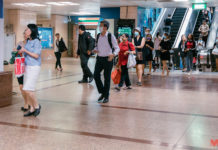 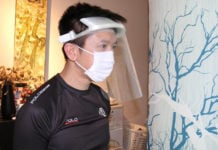 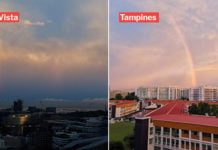