Netizens had lots to say when news of a Women’s Boot Camp first broke last month. And they even have more to say now that details of its participants have emerged.

In case you aren’t aware, between 1 and 2 Sep, women in Singapore will have a once-in-a-lifetime chance to experience National Service (NS) at Maju Camp.

From handling a SAR 21 to tasting combat rations, participants at the female boot camp will be able to do it all.

And judging by the response, Singaporean women are quite game — the camp has received over 1,000 applications from interested parties. This far exceeds the 100 slots available.

Did you hear that? 1,000 people fighting for 100 slots. Organiser Ang Mo Kio Women’s Executive Committee eventually had to hold a ballot.

In the end, the lucky 100 comprised participants aged between 13 and 64. The average age of participants is 29, reports The Straits Times.

While response to the female boot camp has been overwhelming, online response to its participants have been mixed.

Here are some reactions to their participation: 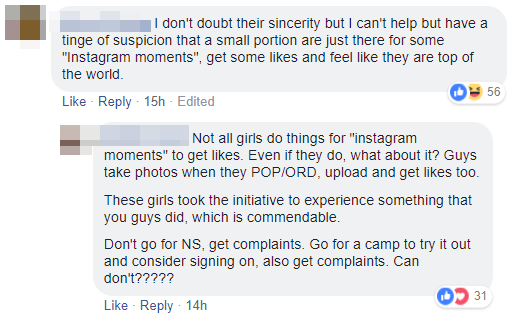 Some can’t help but feel that the girls are only at the female boot camp to get Instagram shots and social media exposure.

2. 48 hours is too short for an accurate NS experience

Netizens took issue with the length of the camp as well, saying that a 2-day boot camp is a far cry from the actual 2-year long military service.

Unsurprisingly, some took the opportunity to push for NS to be made compulsory for women.

But not everyone had something to negative to say. Some were kinder with their words, calling for more respect and understanding.

A netizen acknowledged the fact that males and females go through different journeys in life and called for more respect among both sexes.

A male netizen recalled an experience working with females in the military and said they made “equally good or better soldiers”. He adds that the female boot camp would be useful, implying that it would help the military attract better talent.  Like these uniformed women, who prove that gender is no barrier to success in the military.

With 2 weeks to go before they begin they “enlist”, we wish these 100 women all the best. Remember, walk faster ah.