Earlier this year, Mark Lee and his wife revealed that their 5-year-old daughter had been diagnosed with glomerulonephritis.

It is an acute inflammation of the kidney caused by an immune system imbalance.

The couple created a Facebook page, ‘Cheers for Calynn Lee’, to explain her condition, in hopes of encouraging other families going through similar ordeals not to give up. And now, Mark Lee has revealed that his daughter, Calynn, is currently undergoing a third treatment. As part of this, she has to go to the hospital thrice a month and take medication daily.

The following 6 months are the “critical period” for Calynn.

If we’re lucky, she should be treated in 3 to 6 months.

But it’s also possible that this condition follows her for a lifetime.

Either that or her immune system will re-adjust by age 16 or 17 and she recovers automatically.

If Calynn’s kidneys were to get infected now, the past treatments would be in vain.

So the Lee family is extra cautious about maintaining cleanliness and hygiene.

They even avoid bringing her to crowded places, like the playground.

Surprised by her docile temperament 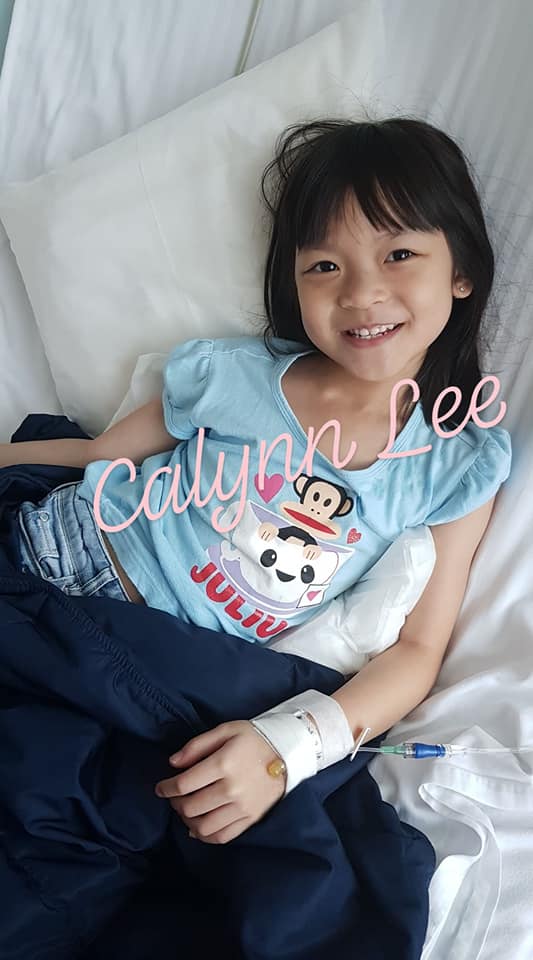 If anything, Calynn seems to have become more sensible after having gone through the treatments.

The couple finds themselves having to nag less as Calynn begins taking more responsibility for her own things. For instance, she now brushes her teeth automatically after eating and puts her things away without being told to do so.

The abrupt change comes as a shock to Mark Lee. He believes that Calynn wants to prove that she can handle simple things so they wouldn’t go on family overseas trips without her.

Mark Lee says that he can’t help but feel heavy-hearted after seeing how obedient his daughter has become.

Meanwhile, Singaporeans from all walks of life have come forward to offer words of encouragement to Calynn.

You can see more of these well-wishes on our FB post here and you can leave your own too.

We have shared these comments with Mark Lee and we hope they will give Calynn the courage to persevere through this difficult period.

It is heart-wrenching to a 5-year-old having to go through so much.