The fire broke out on the 14th floor of the block.

As safe of a haven as our homes can be, they’re not immune to danger, as HDB units have been known to catch fire.

On Friday (8 Oct) morning, a fire broke out on the 14th floor of an HDB block at Ghim Moh Road. 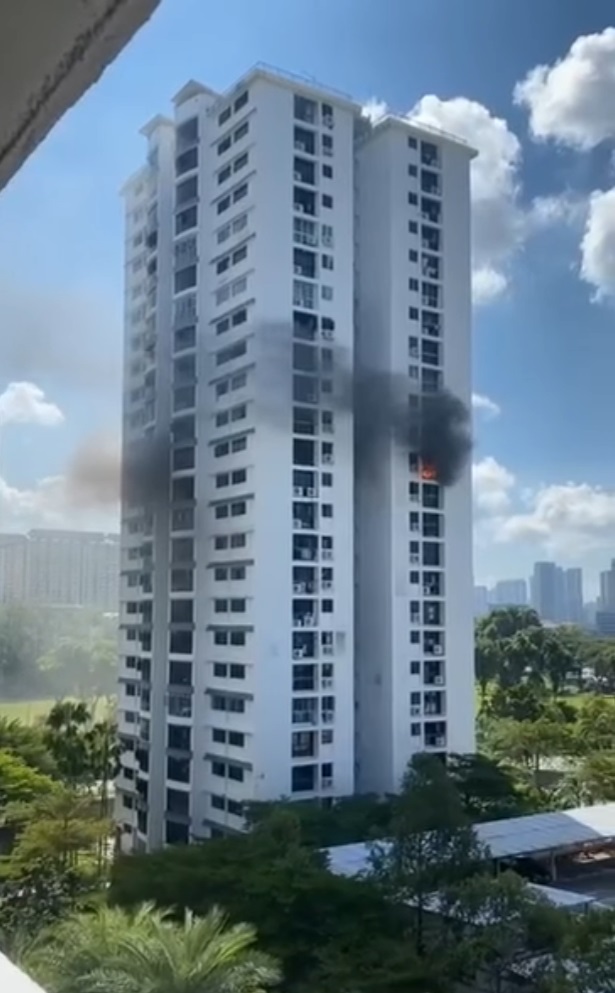 Singapore Civil Defence Force (SCDF)  personnel were rushed to the scene and extinguished the fire using a water jet. Together with the police, they evacuated 80 people from the affected block.

No major injuries were reported and the cause of the fire is under investigation.

Pictures and videos of the fire first circulated on Facebook, with many showing the billowing smog coming out of an HDB unit in Ghim Moh.

Thankfully, the SCDF were quick to arrive at the scene and calmly prepared to put out the flames.

Speaking with MS News, SCDF shared that they had to forcefully enter the burning unit on the 14th floor of Block 13 Ghim Moh Road.

While some firefighters extinguished the flames using a water jet, others helped to evacuate roughly 80 people from the block.

Though nobody sustained serious injuries, 2 persons were sent to Singapore General Hospital for smoke inhalation.

On 8 October 2021 at about 10.05am, SCDF was alerted to a fire at Block 13 Ghim Moh Road. The fire involved contents of a living room in a unit on the 14th floor. SCDF conducted forced entry into the unit. SCDF extinguished the fire using a water jet. The Police and SCDF evacuated about 80 persons from the affected block. Three persons self-evacuated before the arrival of SCDF. SCDF conveyed two persons to Singapore General Hospital for smoke inhalation. SCDF assessed one person for smoke inhalation and the person subsequently refused conveyance to the hospital. The cause of the fire is under investigation.

He said in the post that the families affected by the fire were safe.

The Housing and Development Board (HDB) will also be accommodating the affected family in a nearby flat as they piece things together after the fire.

Kudos to the SCDF & HDB for their quick responses

The ever-ready SCDF has once again come to the aid of another accident. We’re glad that they managed to get everyone to safety without any serious injuries.

Kudos to them and also the HDB for helping the family out by providing them with a temporary roof over their heads.