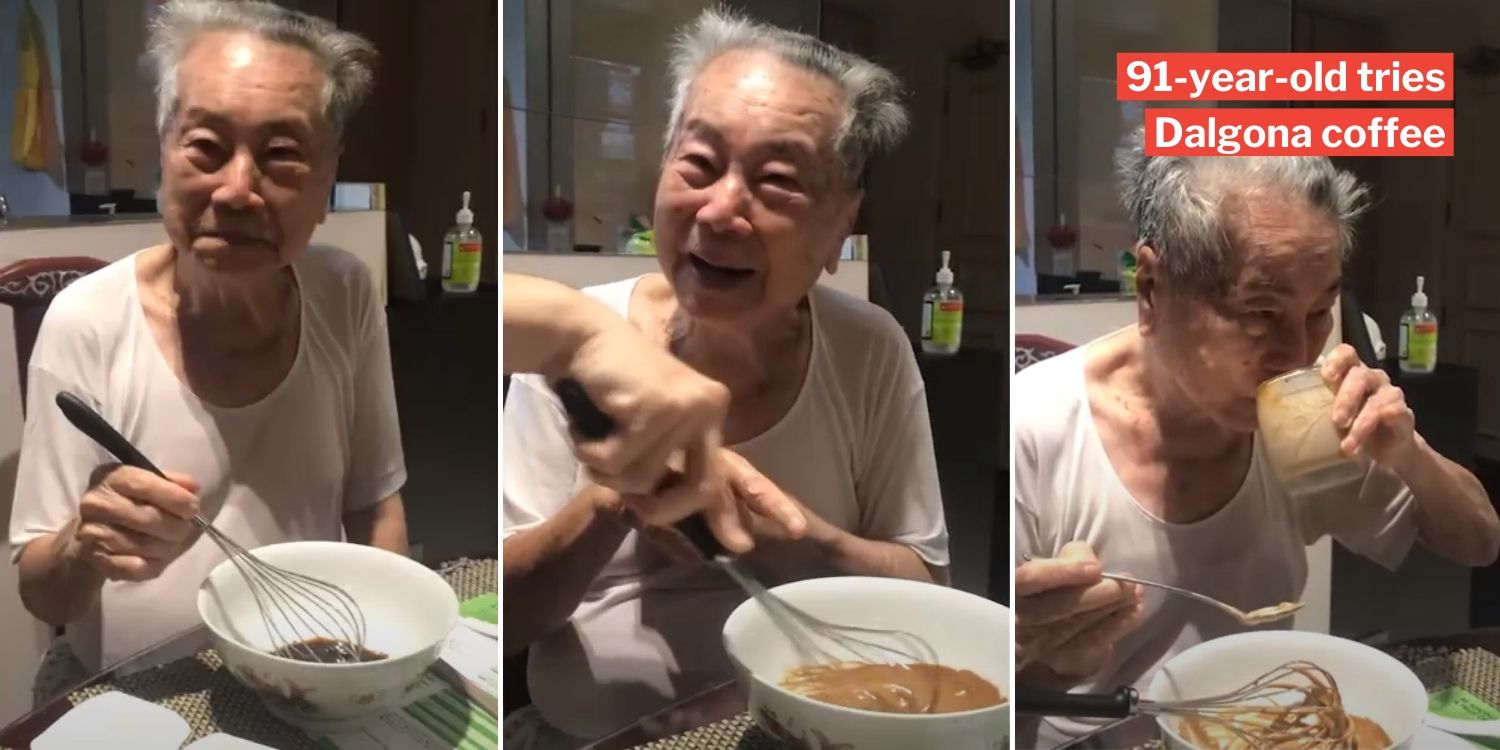 Millennials whiling their time away at home have hopped on various quarantine trends, from baking, to TikTok videos.

It’s about time the older folks joined in, and this grandpa learning how to make Dalgona coffee shows just how to do so.

Taking instructions from his grandson in Teochew, he gamely tries out the recipe, to much amusement from the young man and netizens alike.

The video, which was also shared on Facebook group Subtle Asian Traits (SAT), garnered over 7,000 likes and almost 2,000 comments at the time of writing.

Netizens mostly said how cute the grandpa is, and how he reminds them of their own ah gong.

The video starts with the grandson asking his grandpa if he wants kopi, before cutting to the latter sitting in front of several bowls of ingredients. 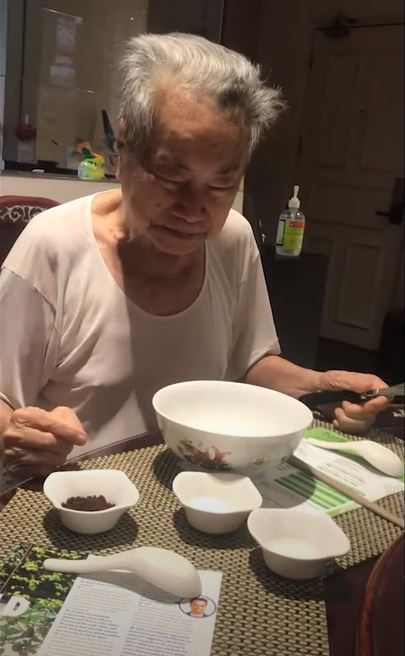 He proceeds to add the ingredients into a large bowl, and starts whisking them together.

When he finds out the process will take roughly 10 minutes, he continues whisking, albeit with a straight face. 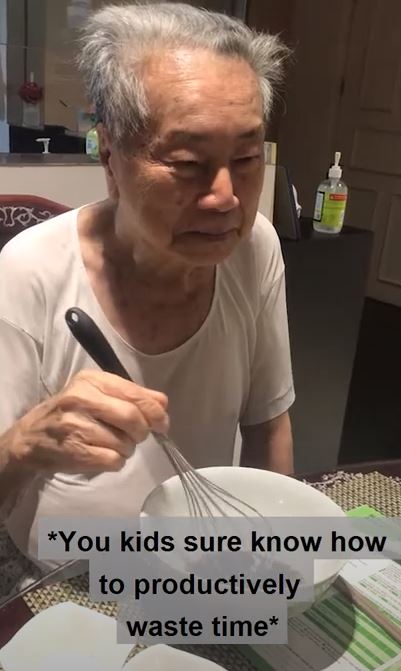 His granddaughter then takes over off-camera, to speed up the process.

He later tries to take over again, confident that he can do it himself. While doing so, however, he gets distracted by a question his grandson asks:

Do you know that many people commented that you are very cute?

The grandpa’s immediate reaction is to laugh the compliment off, and tell his grandson to not “talk nonsense”.

But the impact of the praise soon takes over, as he puts the whisk down, and bashfully runs his hand through his hair. 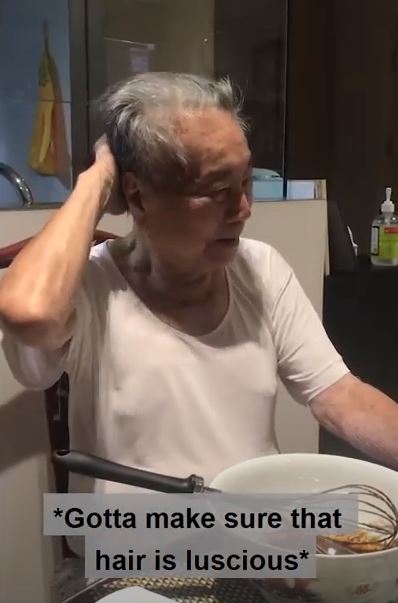 In the meantime, his granddaughter continues whisking, as the elderly man sits there unaware. When he finally checks on the bowl, he is stunned to see the coffee mixture looking significantly different. 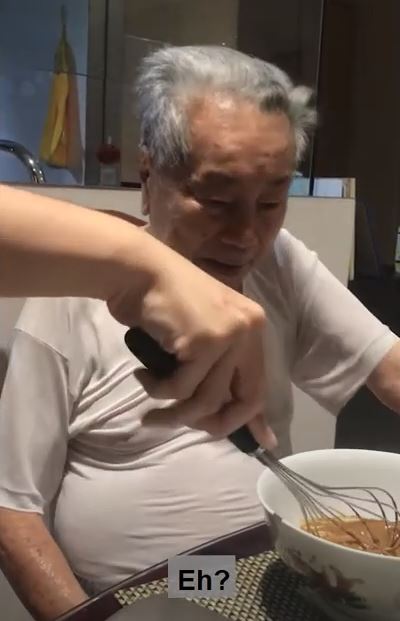 He acknowledges that it smells and looks a lot nicer than before, but refuses to come closer to sniff the mixture.

Not as good as his kopi o kosong

Of course, the experience isn’t complete without trying the creation, and the grandpa takes a sip of the frothy coffee. 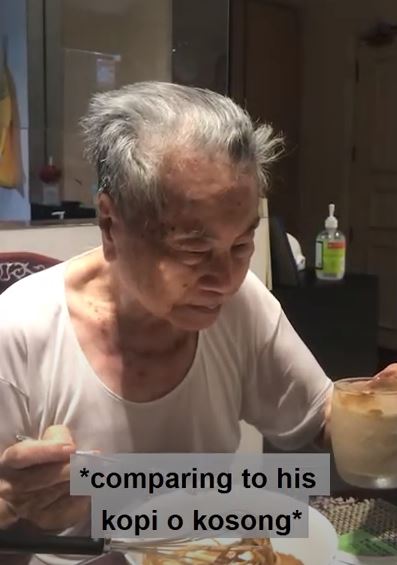 He pauses before exclaiming that “there’s not much taste” and chuckling. He then leaves to start preparing dinner.

The video closes with a short snippet of the grandpa observing his grandson who was editing the video, while munching on boiled sweetcorn. 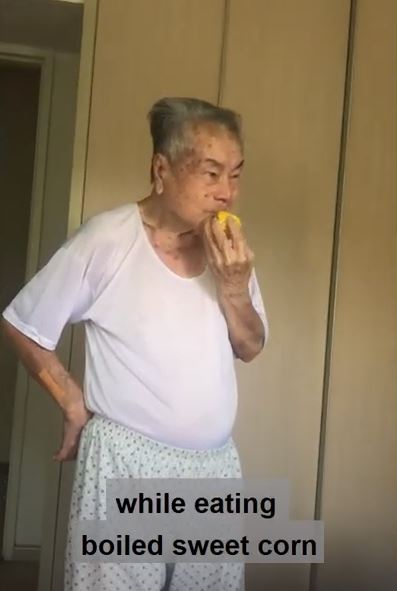 He really does look adorable doesn’t he?

If you were entertained by the video, there’s an earlier one of him eating a McSpicy, in what looks to be an ongoing series.

Hopefully, his grandson will keep sharing these clips that not only put smiles on our faces, but are also a great way to preserve such precious moments for memory.