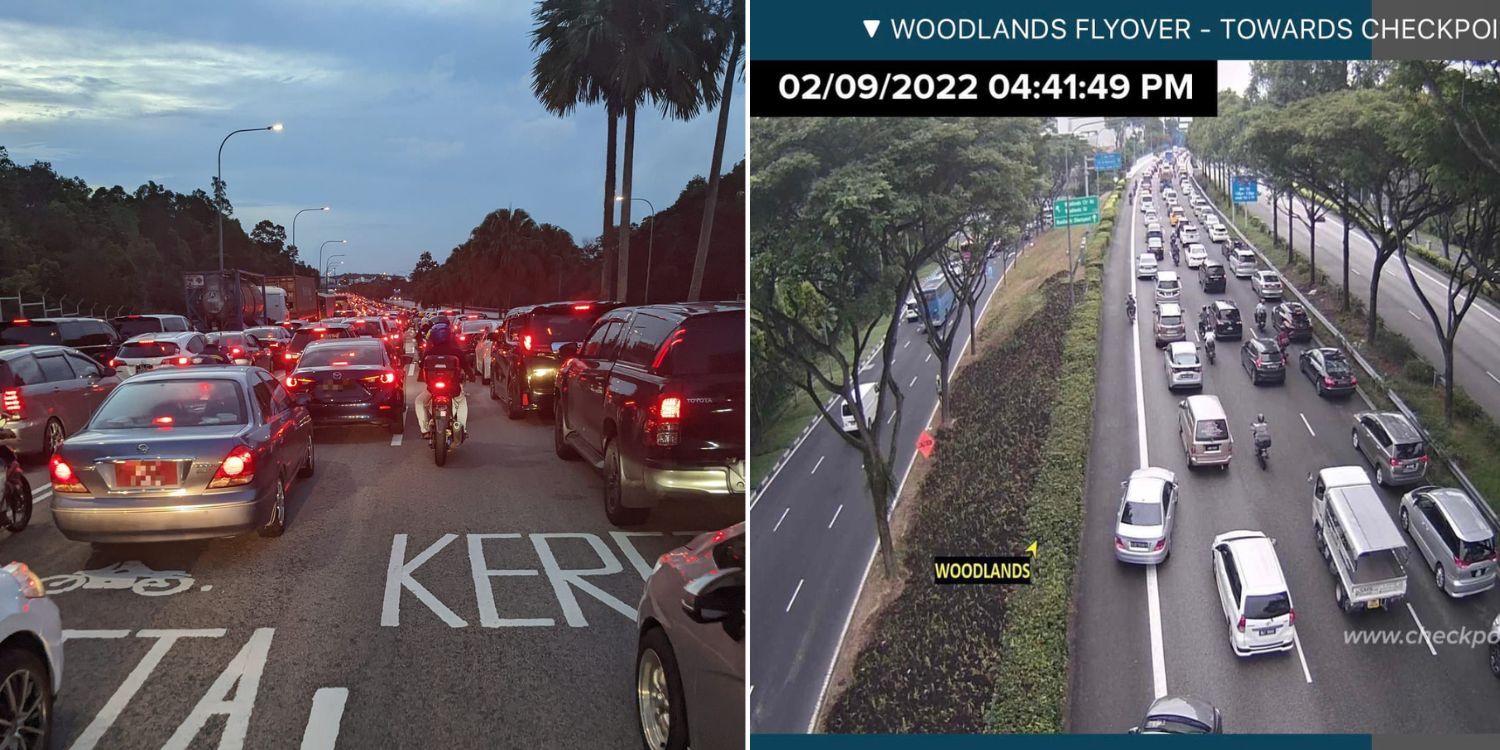 The tailback at the Causeway subsided only at about 1am.

Earlier this week, the Immigration & Checkpoints Authority (ICA) advised motorists that heavy traffic was expected across the land border between Singapore and Malaysia as the September school holidays begin.

This was proven correct as congestion was reported at both Woodlands and Tuas checkpoints.

In fact, the tailback from Woodlands Causeway at one point stretched kilometres back till the Seletar Expressway (SLE) junction, said a netizen.

The heavy traffic started forming on Friday (2 Sep) morning — the first day of the school holidays, as students had Teacher’s Day off.

It seems that many families may have decided to get an early start on their Johor vacations, as a netizen said the Woodlands Causeway was packed in both directions at 8.30am. 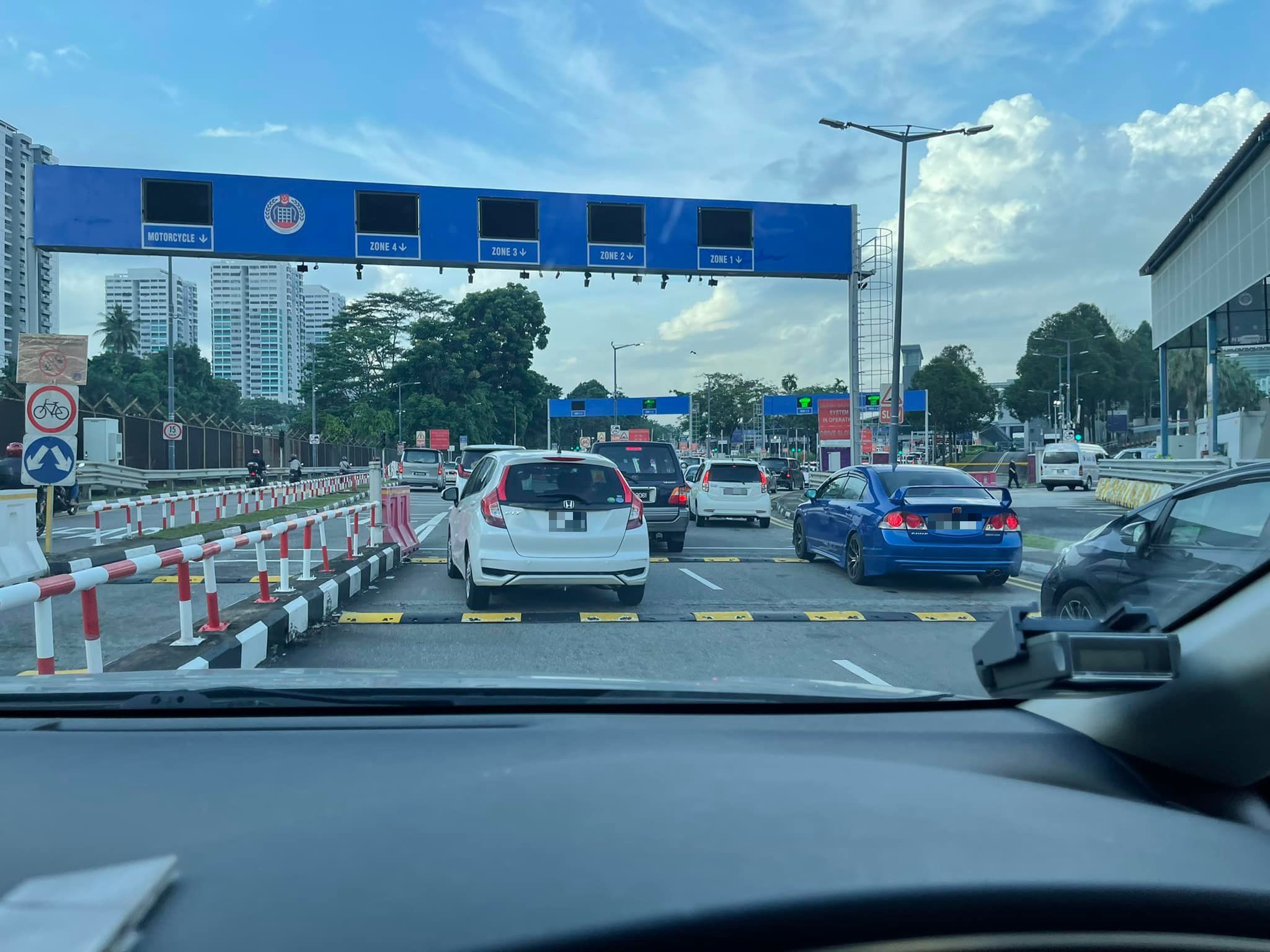 Over at the Second Link, the situation was no better.

At 8.14am, a netizen posted a video of the queue from Tuas Checkpoint that stretched seemingly endlessly back into the Ayer Rajah Expressway (AYE).

As for the human traffic, the crowd at the Sultan Iskandar Customs, Immigration and Quarantine (CIQ) Complex started growing at 8.26am. 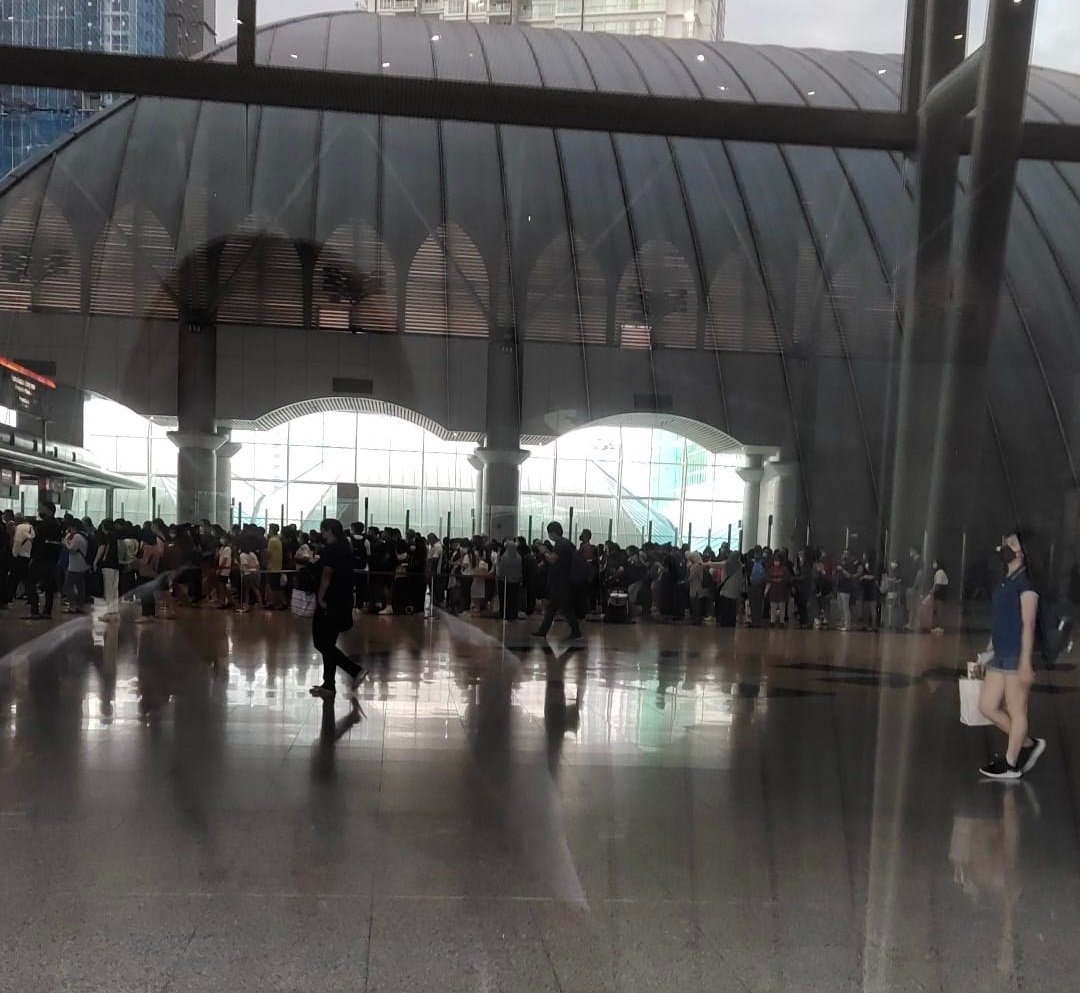 As 11.15am, long queues formed in front of what looked like only a few counters that were open. 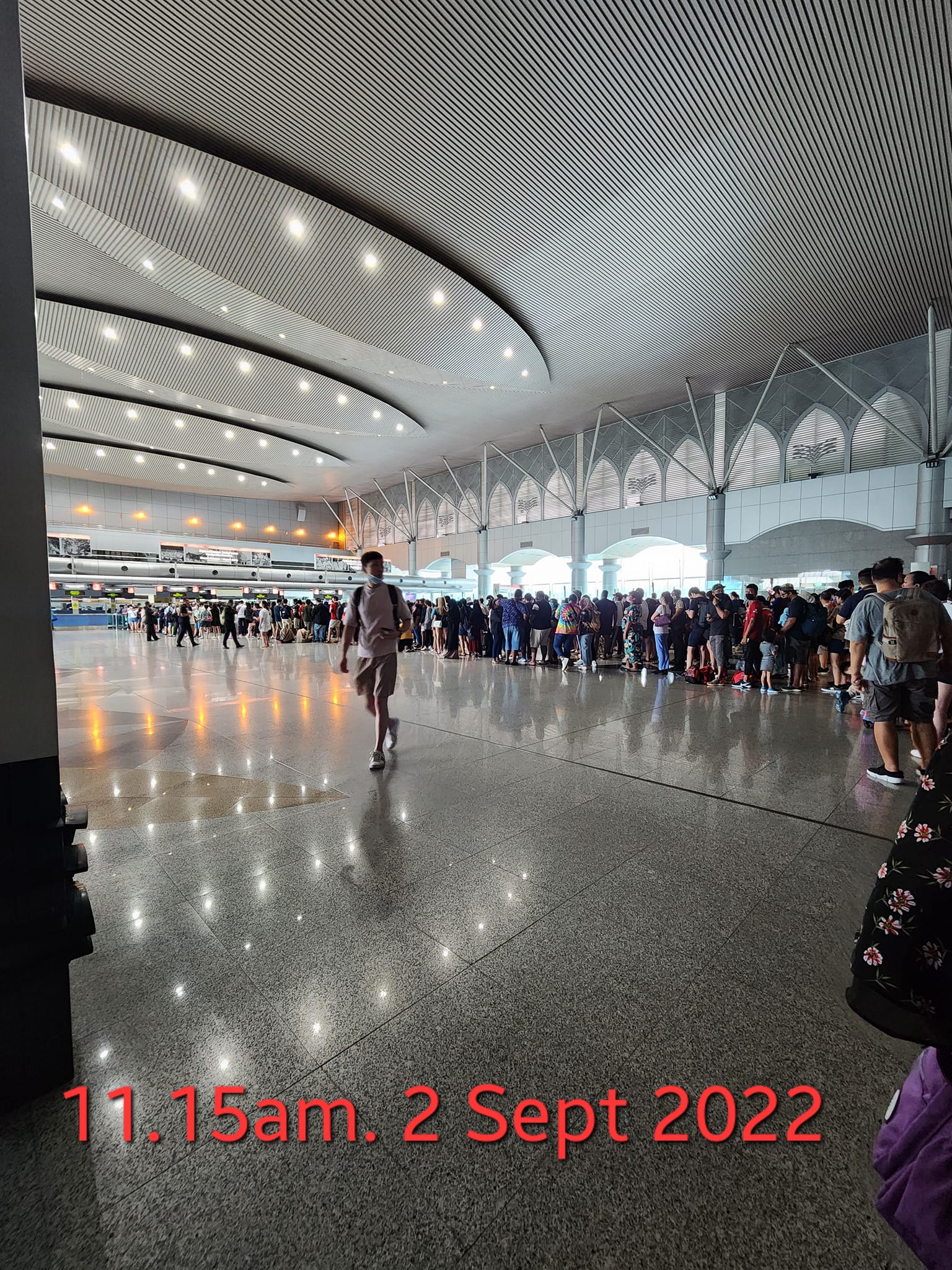 At 12.07pm, the hall was packed to the rafters, with the queues reaching the wall on the far side.

A woman said she took two hours to clear immigration.

Situation worsens in the afternoon

As afternoon came along, the situation only worsened.

At 12.30pm, the 1.9km Second Link Expressway was choked with traffic, according to a motorist who shared a photo of the jam in the Malaysia-Singapore Borders Crossers Facebook group. 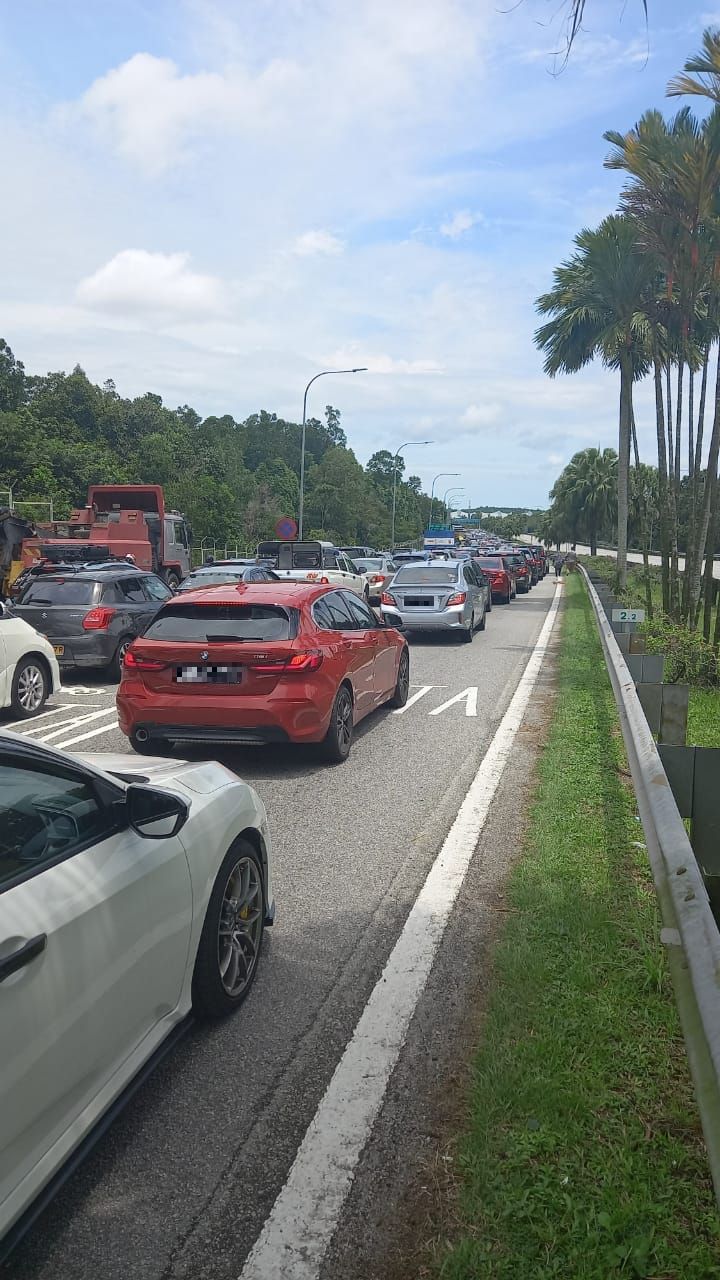 At 1.16pm, judging from a feed from checkpoint.sg, the tailback was evident even before vehicles crossed the waters of the Straits of Johor. 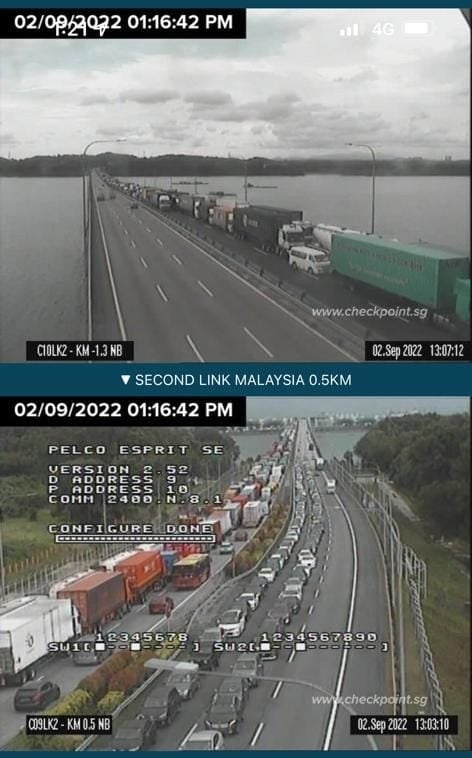 The situation prompted the ICA to post on Facebook at 2.35pm, warning of delays due to “heavy departure traffic” at both checkpoints. This was caused by tailback from Malaysia, they added.

At 3.37pm, there was an estimated wait of up to 3.5 hours for JB-bound vehicles to clear the checkpoint at the Causeway, and almost 3 hours at the Second Link, according to the Beat The Jam app. 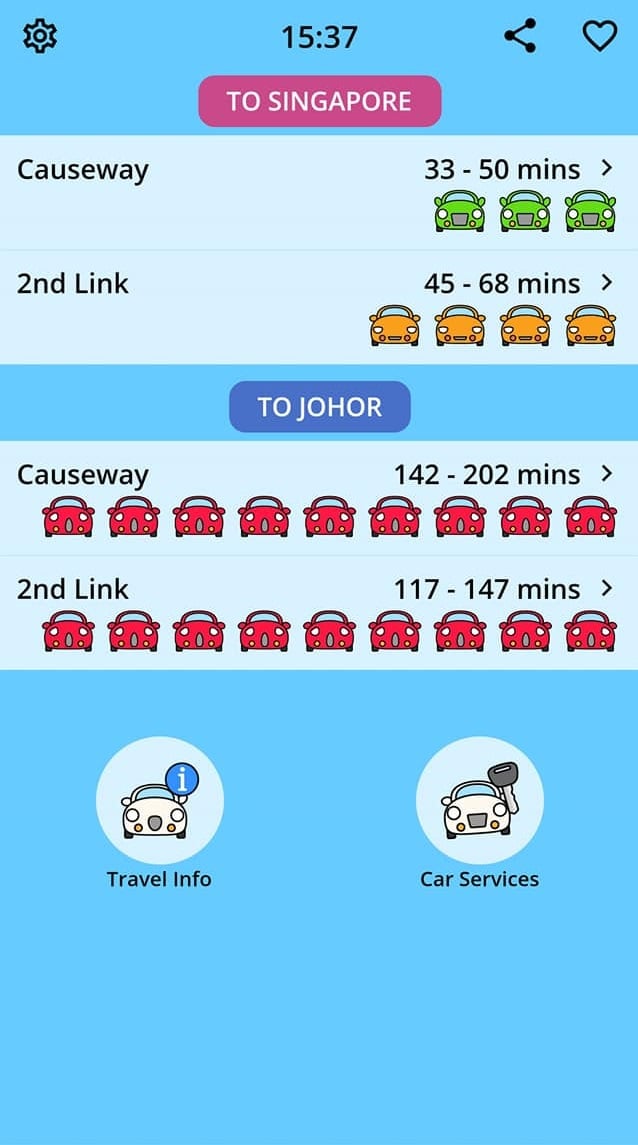 At 4.35pm, a motorcycle-riding netizen said the jam affected motorcyclists at the Causeway too, as they had to slow down before the bridge as it was packed with cars. 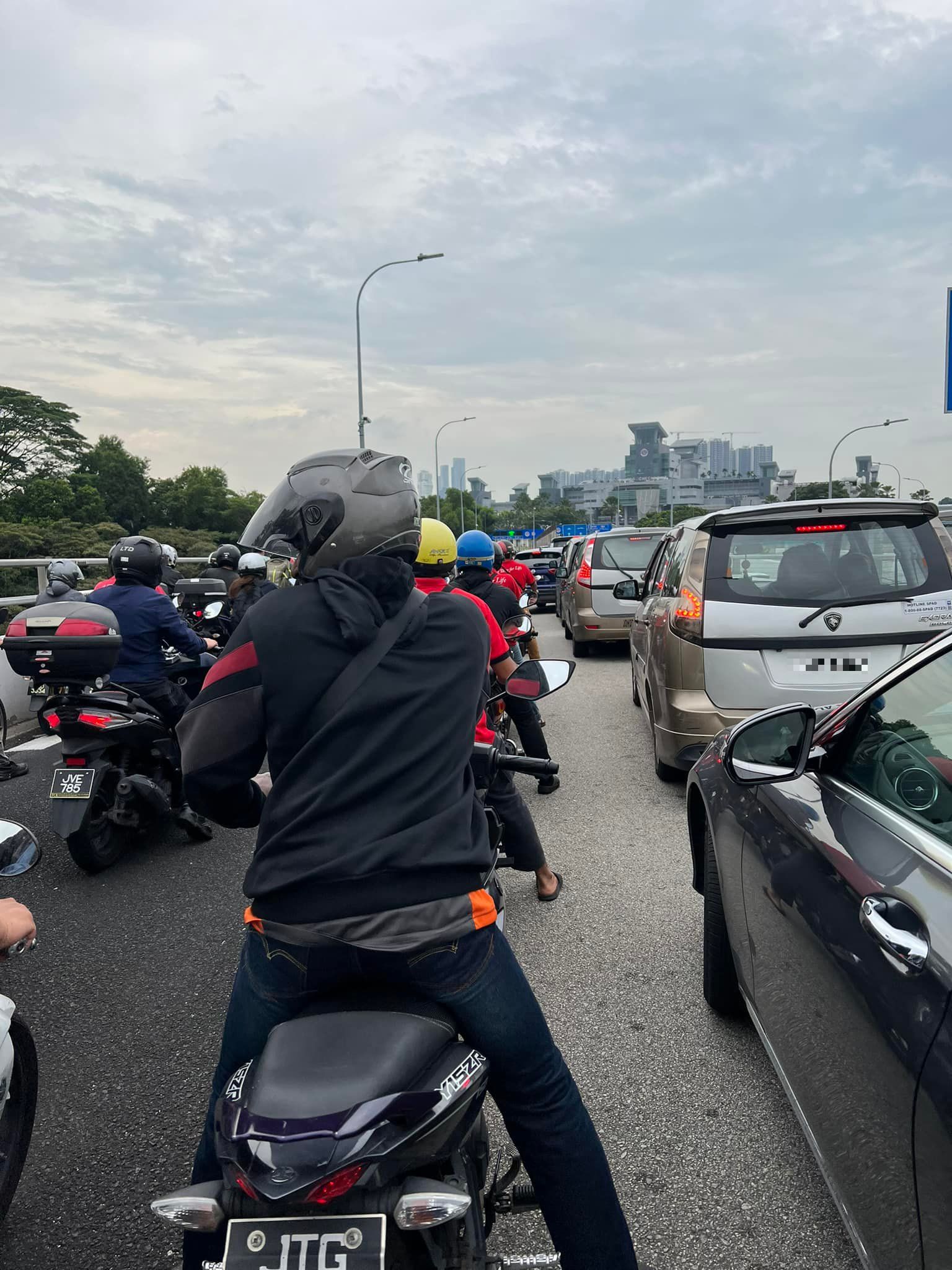 The congestion prompted the ICA to issue another warning at 5.43pm, on the heavy traffic and tailback.

Some motorists trapped for 6 hours

Some motorists who attempted the Singapore-to-JB crossing on 2 Sep afternoon ended up being stuck for about 6 hours, according to 8World News.

They also complained that only three or four immigration counters were open at the Johor side, contributing to the slowdown.

Netizens also observed that the jam started almost immediately after passing through Singapore immigration and customs, and lasted all the way till the JB CIQ.

One traveller professed that he’d left work early to reach Tuas at 10.30am, but only arrived at Malaysia customs at 5.46pm — a trip of more than 7 hours. 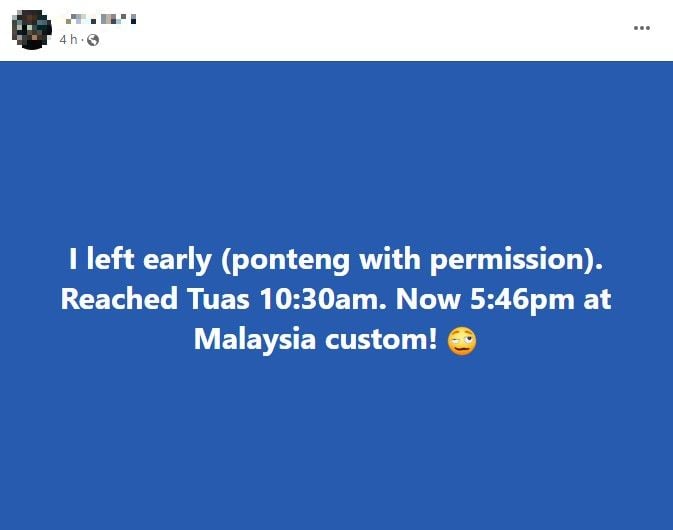 However, more frustration was to come.

Congestion fails to let up in the evening

As day turned to night, the congestion failed to let up. In fact, it seemed to get worse.

By 6.21pm, the wait at the Causeway was up to almost 4 hours, according to Beat The Jam. 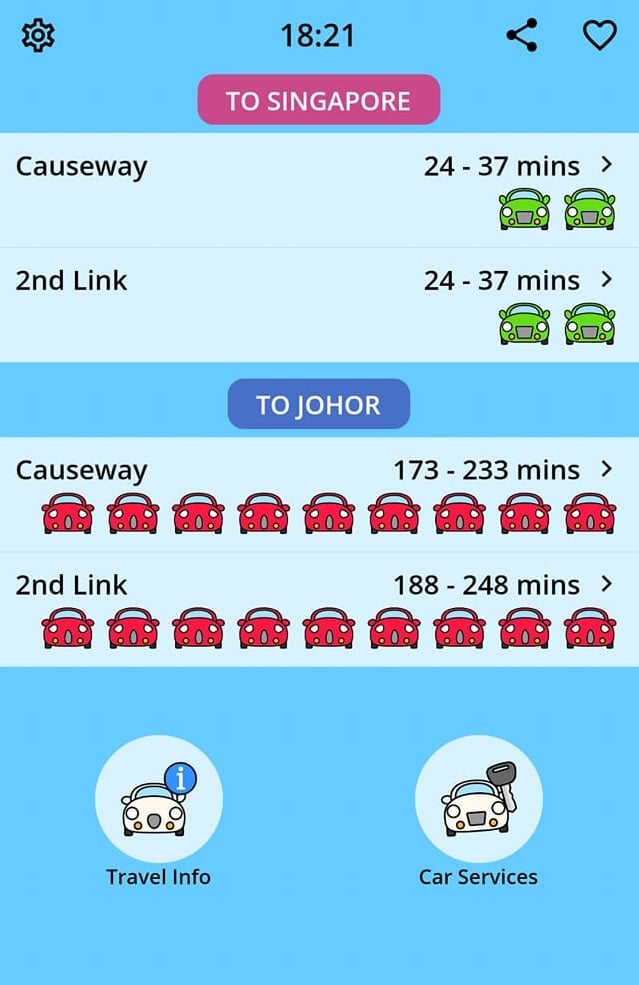 At 6.26pm at the Second Link, a motorcyclist reported that a car had broken down on the bridge, exacerbating the jam. He also complained about “selfish” motorists cutting queue in the emergency lane, causing others to be a caught in a greater jam.

80% of those who did that had a Singapore-registered plate, he claimed. Over at Woodlands, a netizen said at 6.45pm, the tailback had reached the SLE exit on the Bukit Timah Expressway (BKE) — some 3-4km away. 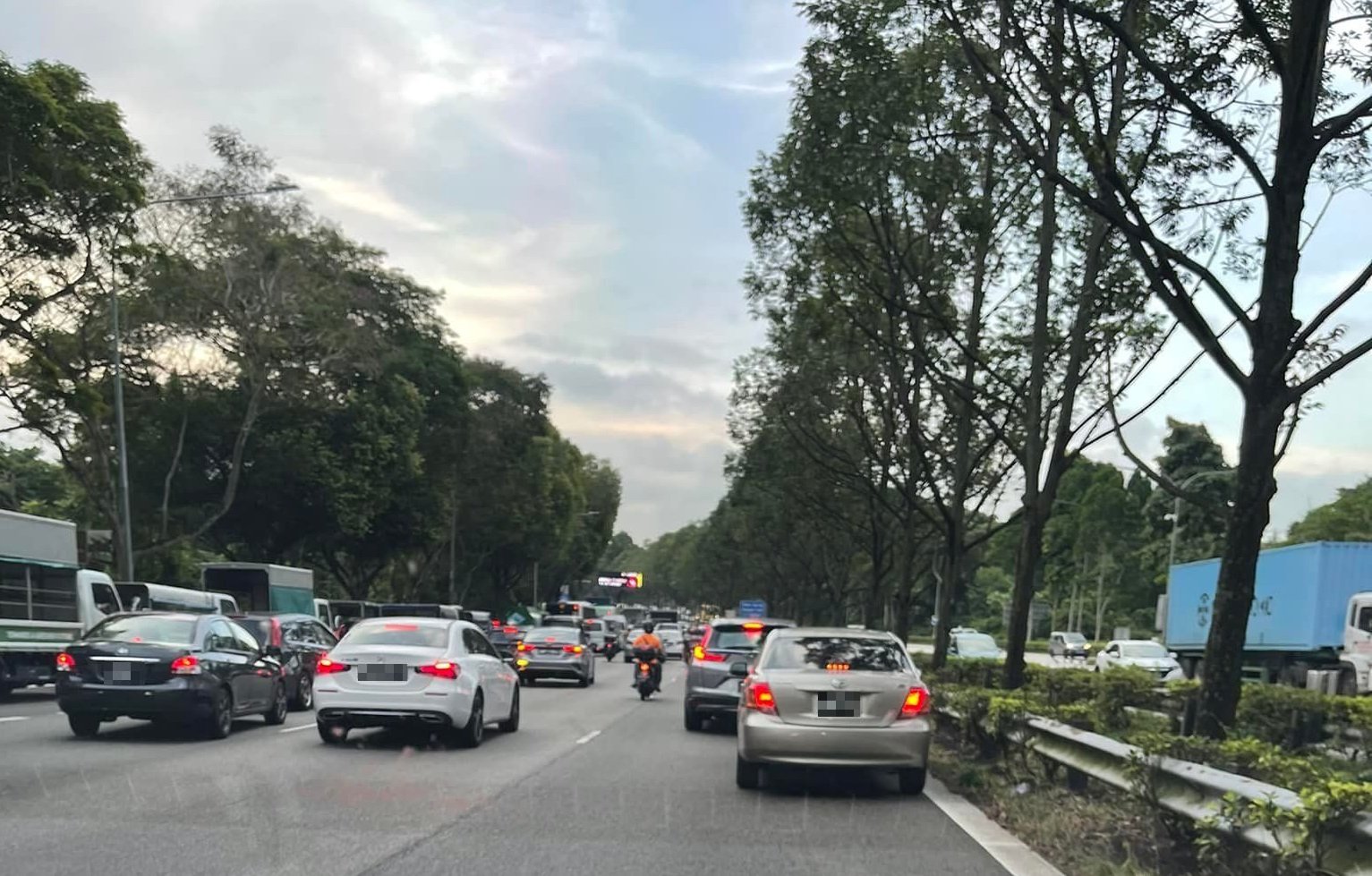 As darkness fell, a netizen in a bus said at 7.59pm that they’d barely moved an inch after 1 hour 20 minutes. 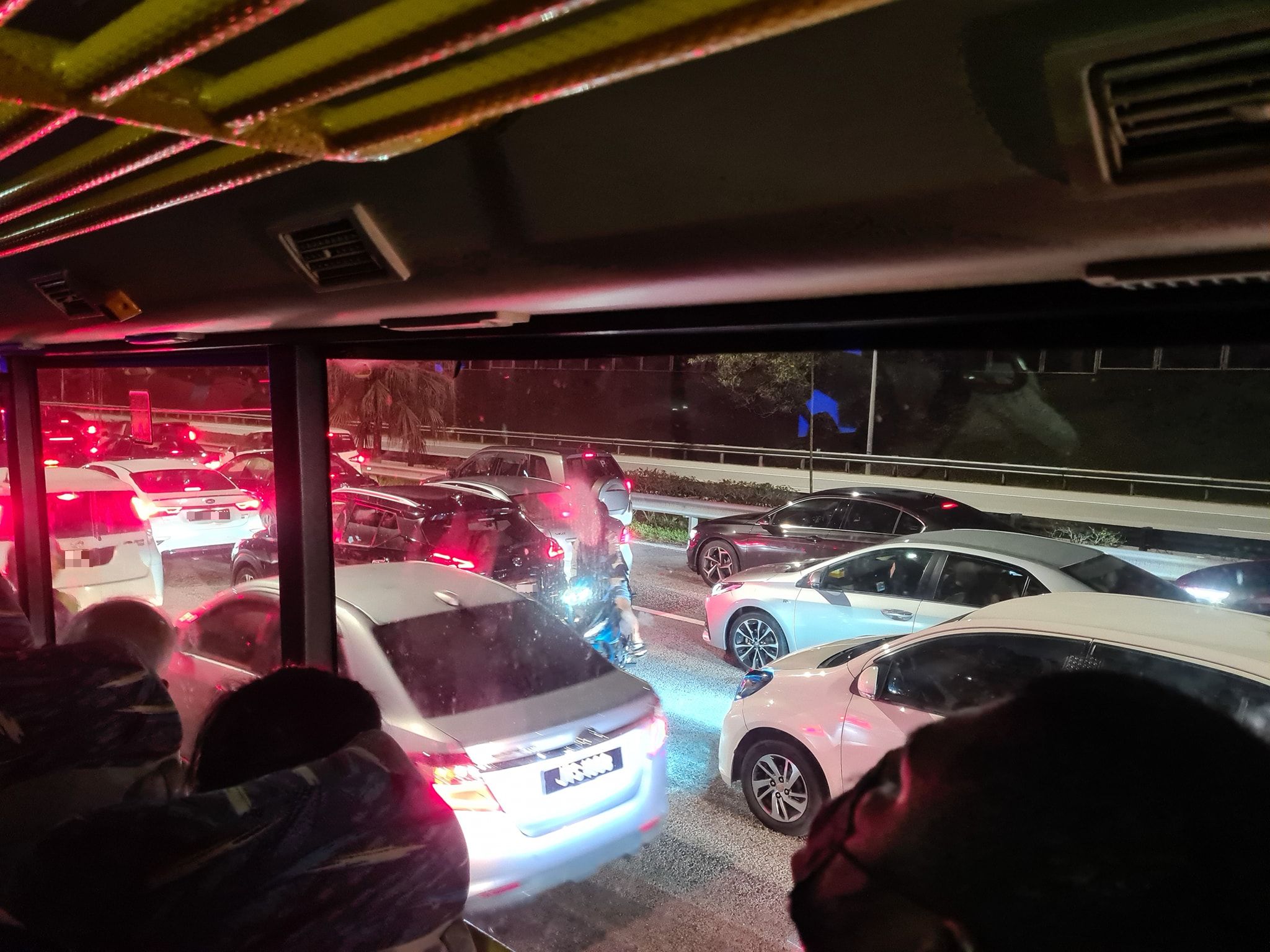 Another maintained that it would take 5 hours to reach JB by the Second Link, considering he’d already been stuck for 4 hours and only reached halfway.

At 8.27pm, a traveller observed that the queue at the Causeway entering JB stretched all the way to the very counter of the car lane in the Singapore Woodlands Checkpoint.

Meanwhile, the human queues at the JB CIQ itself persisted till deep into the night at 9pm. At 9.17pm, a netizen reported that two cars had broken down metres away from each other, possibly due to overheating. 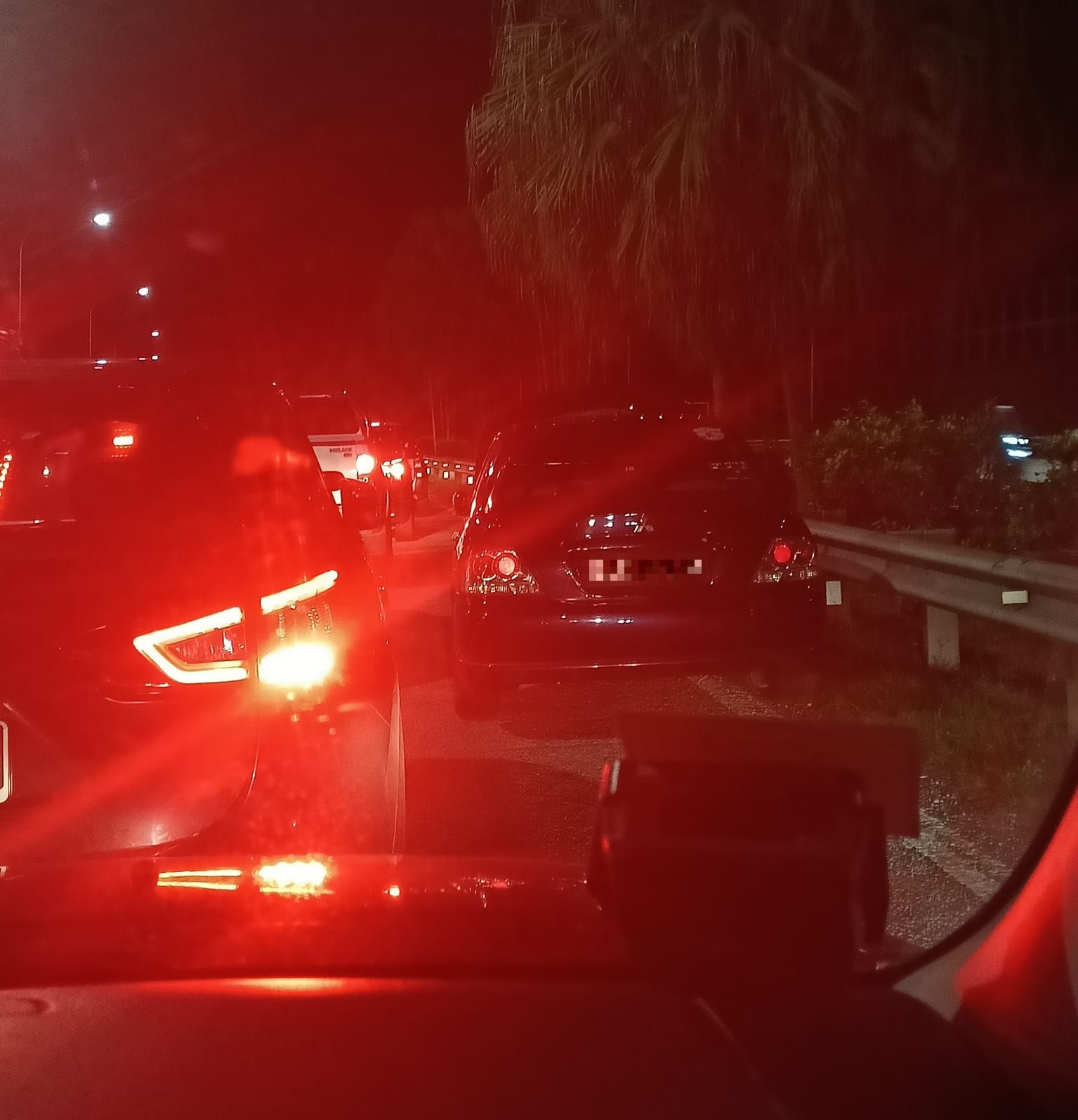 The ICA warned on Facebook of heavy traffic at both checkpoints for the third time at 9.20pm.

Jam subsides at Tuas, then Causeway

Thankfully, as the night wore on, the jam at the Tuas Second Link began to subside.

In their fourth update at 10.23pm, the ICA said the heavy traffic was only at the Woodlands Checkpoint, omitting the Second Link for the first time that day.

According to the One Motoring website, the crossing at Tuas had mostly cleared up by 11.05pm. 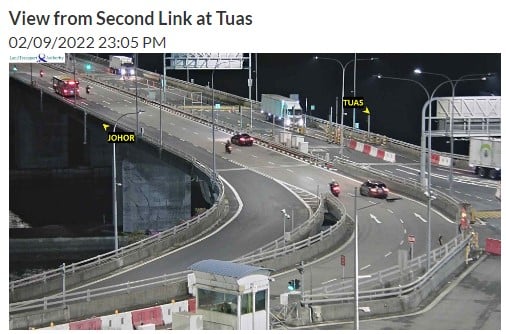 However, there was still a jam at the Causeway at that time. 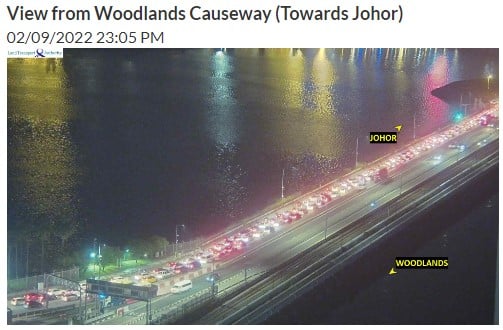 At 1.04am on Saturday (3 Sep), the ICA informed motorists that the tailback of departure traffic had finally subsided at Woodlands.

The feed from One Motoring also showed that the Causeway was much clearer than before at 1.24am.

However, there still appeared to be some form of queue situation nearer to the Johor side. 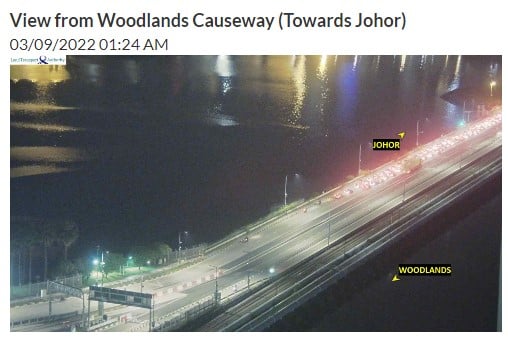 Let’s hope that the almost day-long congestion at our land borders will dissipate as the school holidays continue.

After all, after Friday, whoever wants to head to Malaysia would’ve done so or given up trying and the traffic situation would return to normal — until next week, when everybody returns to Singapore.

Did you get caught in the epic jam at our checkpoints on 2 Sep? Do share your experiences with us.