He stayed put so he could wait for the police to come, he explained.

On Friday (29 Jul) night, a narrow lane in Upper Bukit Timah was blocked, rendering it impassable to most motorists for a while.

From videos of the incident posted on TikTok, the blockage appeared related to a dispute between a Jaguar and Honda.

However, the driver of the Jaguar has said that he didn’t intend to park there at all and tried reversing his car after realising his mistake.

He added that this couldn’t be achieved as the Honda was blocking his way.

Several videos of the incident were uploaded to TikTok on Friday (29 Jul) night, showing the black Jaguar jutting out of a parking lot along Cheong Chin Nam Road. They also show the male driver in white pants standing near the vehicle.

Next to it was a black Honda Odyssey, idling stationary in the middle of the street.

While the OP of the TikTok videos claimed that the Jaguar had snatched the parking lot from the Honda, the Jaguar driver told MS News that he had no intention of doing that.

Rather, he said he’d wrongly entered the parking lot.

According to the Jaguar driver, the Honda “was not moving for a really long time when we’re not at the parking lot yet”.

Thus, he mistook the space for a way to overtake the Honda, he explained.

However, after he realised he’d wrongly entered a parking lot, he tried to reverse but couldn’t, as the Honda and another car behind were blocking his way.

Also, he said his car’s gear selector knob was stuck, and he had to restart the car a few times.

At this point, the Jaguar driver said that the Honda driver – ostensibly the woman wearing a black jumpsuit and pink top in the videos – “punched violently” on his car window.

He added that she also started filming and hurled vulgarities at him, prompting him to exit the vehicle so she would stop damaging it. She also called the police. When they arrived, the officers were seen in the videos listening to the woman, who gesticulated animatedly at the Jaguar. 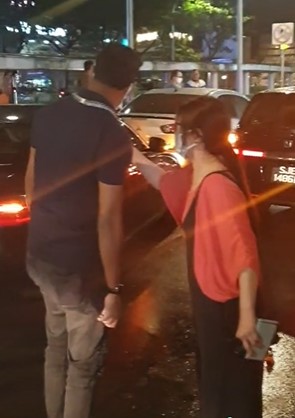 To his credit, the Jaguar driver appeared to remain calm throughout while waiting to give his side of the story to the police.

Clarifying the reason why he didn’t move, he said,

I stayed where I was so I could wait for the police to come. I did not want to park nor fight for the lot with her.

He also pointed out that at no point in time did he block the road in any way.

Jaguar driver says he moved car to give police statement

Eventually, the Jaguar was seen reversing out of the parking lot as police officers walked down the street. 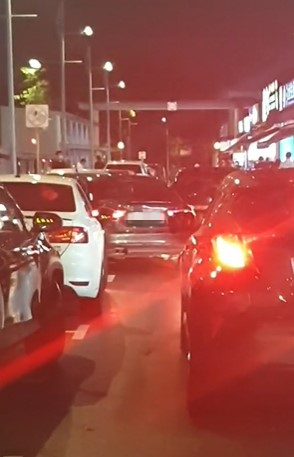 Explaining why he did so, the Jaguar driver said the police wanted him to give them a statement, and there was an available parking lot in front for this to take place.

This corresponds with an eyewitness account from Shin Min Daily News, which said that the Jaguar moved into another parking lot up ahead after leaving the parking lot.

After videos of the incident were circulated over TikTok, the Jaguar driver made a police report, he said.

In the report made on Saturday (30 Jul), he noted the captions on the videos that appeared to pin the blame on him for the incident, as well as some of the comments.

He also said he’s fearful for his safety and reputation. 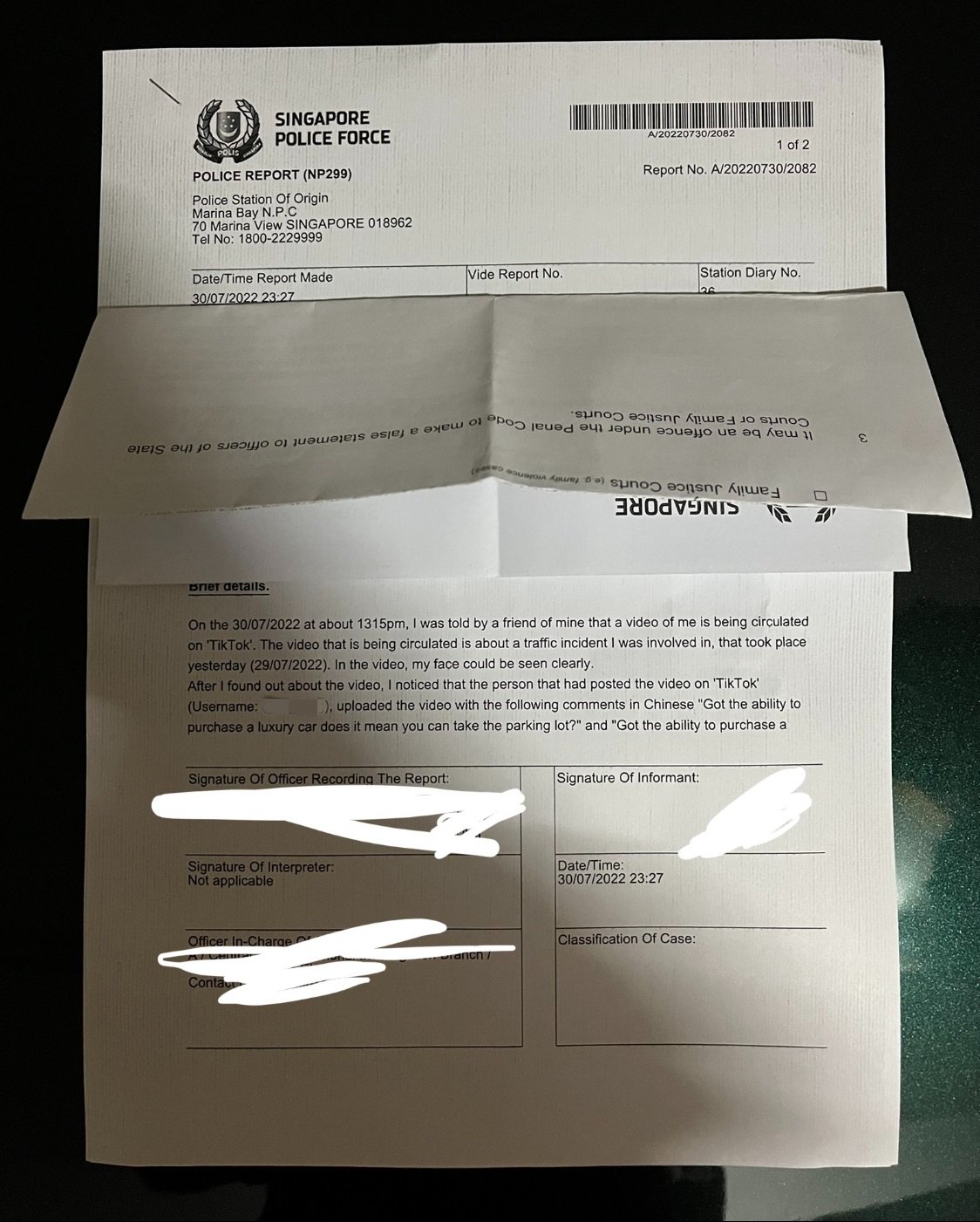 Revealing that the car belongs to his girlfriend, he’s thus afraid that the videos will draw unwanted attention to her, especially since they clearly show her licence plate number.

More details of the incident

Along certain popular but narrow roads in Singapore, disputes may sometimes occur, resulting in traffic being held up.

However, we should not be too quick to judge the circumstances of an incident based on what we see on the Internet due to the limited info available.

Now that we’ve heard the Jaguar driver’s side of the story, perhaps you may come to a different conclusion about the incident.

While it’s not possible at the moment to hear from the Honda driver, at least we now have more details on what allegedly happened.

We hope all sides will be able to settle the dispute amicably.