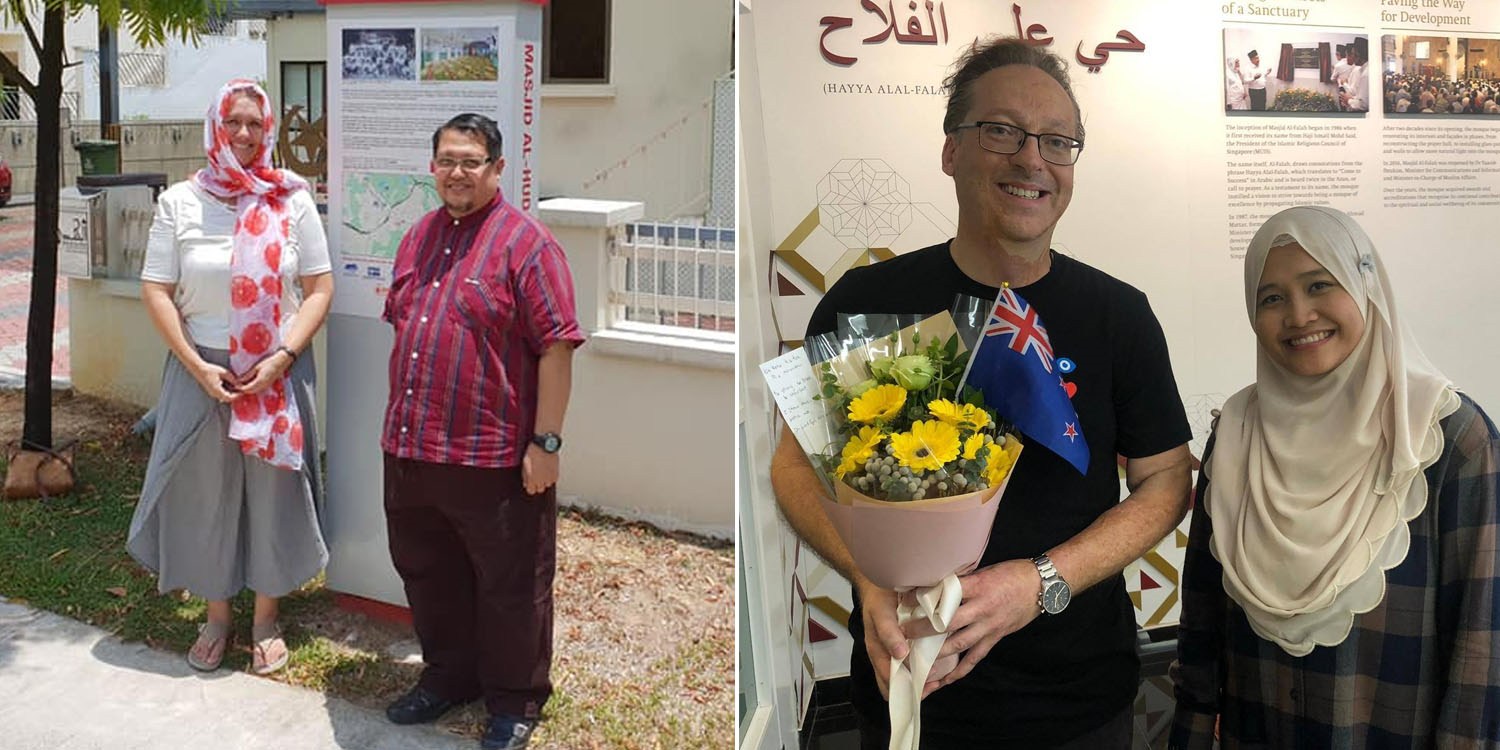 There has been an outpouring of support for the Muslim community in New Zealand in the aftermath of the Christchurch shooting.

The assurance that people are banding together despite their differences is a sentiment that everyone, everywhere can appreciate.

Two Kiwis in Singapore decided to spread the positive vibes by visiting two mosques here in a show of solidarity.

Mrs Kim Forrester, who lives in the neighbourhood, wanted to show her support for Muslims in light of the Christchurch shooting. 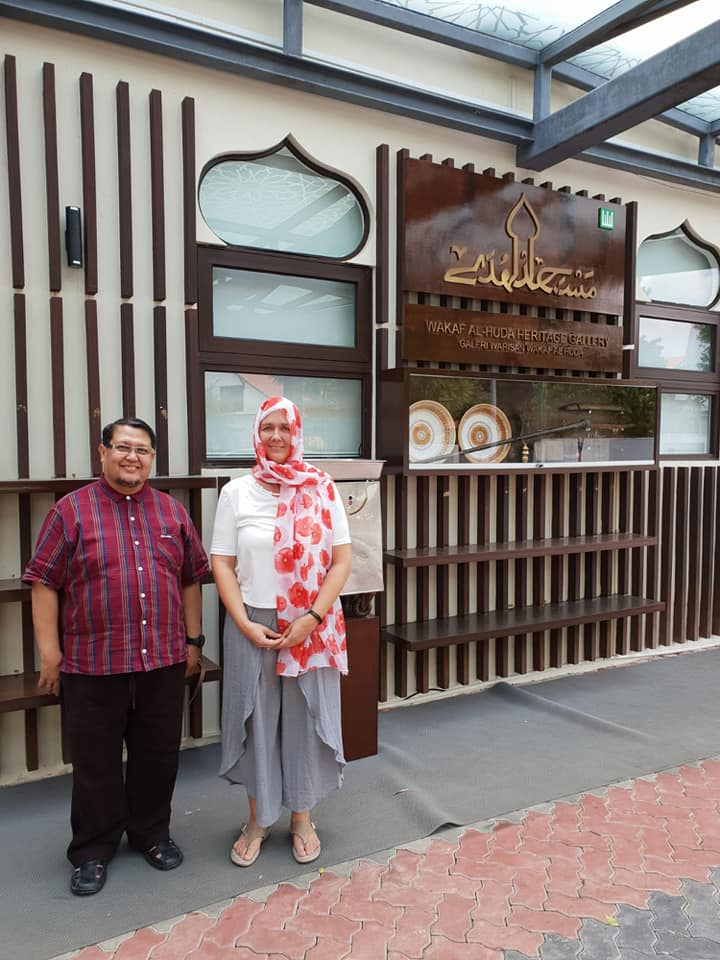 She apologised for the tragedy in her home country and prayed for all Muslims’ safety.

Moved by her gesture, the mosque’s chairman Mr Azman Kassim shared the encounter on Facebook, but insisted that she didn’t have to apologise. 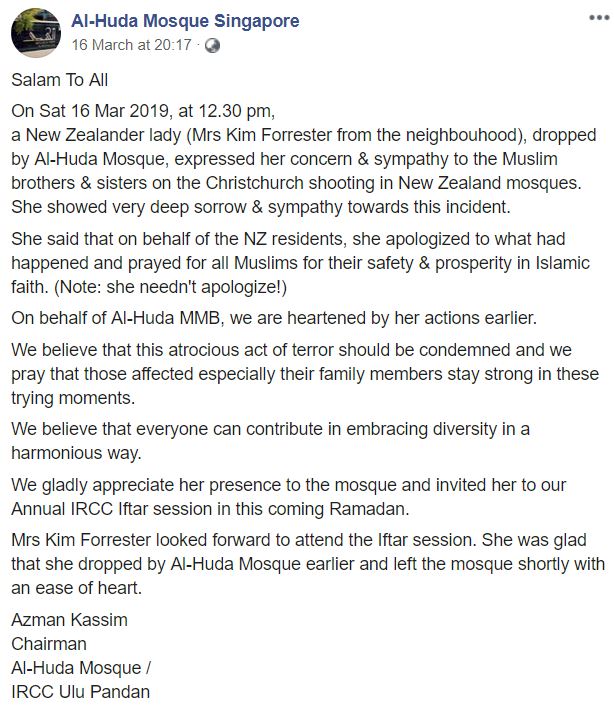 He cited the incident as an example for everyone to accept one another’s differences and live in harmony.

Mr Azman then invited Mrs Forrester to the mosque’s yearly Inter-Racial and Religious Confidence Circles (IRCCs) Iftar session this coming Ramadan, which will be from May to June.

She has accepted the invitation and is looking forward to breaking fast with members of her community.

Located in busy Orchard Road, Al-Falah Mosque is no stranger to visitors from all backgrounds.

But a Kiwi man dropping by with a bouquet of flowers, a handwritten card and a New Zealand flag was quite an unusual sight. The unnamed man, like Mrs Forrester, wanted to extend his condolences for the great loss in the Muslim community.

His card bore uplifting messages in Maori and English, which read:

Be strong, be brave, be steadfast. 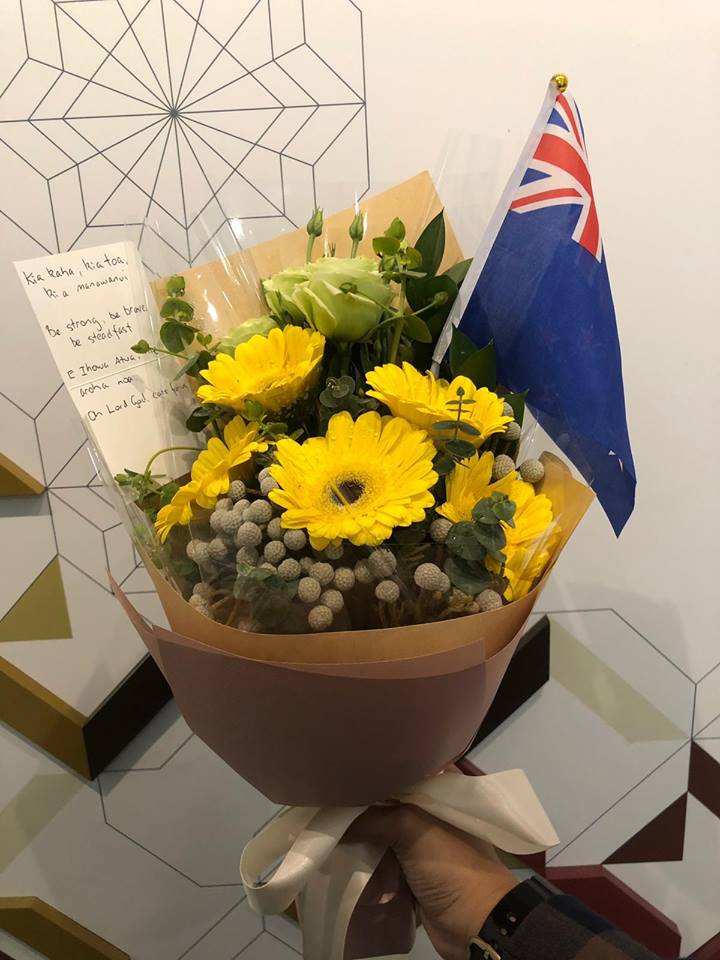 The mosque’s committee took the opportunity to remind Singaporeans that we should uphold the values of “mercy, peace and harmony”.

The Kiwi man has certainly embodied these values and proved that a small act of kindness can go a long way in building good rapport.

We take pride in the fact that Singapore is one of the most racially and religiously harmonious countries in the world.

But we shouldn’t take this for granted and consistently work towards fostering peace and harmony.

Let’s learn from these exemplary individuals and treat fellow human beings with the respect and kindness that they deserve.