The elephant in the room has been addressed.

When a comment about a politician’s ‘lousy school’ was heard in Parliament recently, the Minister at the centre of it all drew much criticism from the public.

As the clip attracted great scrutiny, some netizens began to question if another Minister may have partaken in the conversation too.

Vivian Balakrishnan can be heard mocking Leong Mun Wai – “He’s illiterate”, “How did he get into RI?” from singapore

Since Mr Lawrence Wong sat next to Mr Vivian Balakrishnan, he fell into their line of fire.

For those who haven’t caught up with the saga, the Internet was abuzz after some folks heard unbecoming remarks being made in Parliament on 14 Sep.

“Seriously, how did he get into RI (Raffles Institution)? Must have been a lousy school.”

All signs pointed to Mr Balakrishnan, who eventually admitted to making the “private comments”.

He issued a public apology on Facebook and apologised privately to Mr Leong Mun Wai, who was the target of his remarks.

Since the “private comments” were rather hard to catch, many curious folks would have likely replayed the clip multiple times.

So much so that some began to question whether Mr Wong, who sat beside Mr Balakrishnan, had made some of the remarks instead.

One netizen boldly asked him this just yesterday (22 Sep), in the comments section of his Facebook post about supporting Singaporeans’ livelihoods. 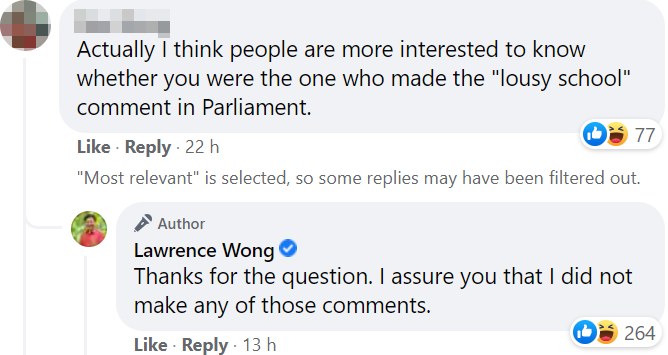 Mr Wong gamely answered, even thanking him for the question. In full confidence, he assured that he did not make any of the comments in Parliament.

Kudos to Mr Wong for his honesty

Being in the public eye isn’t easy, especially when you have to deal with criticisms.

Kudos to Mr Wong for not shying away from the question and answering the netizen honestly.

Hopefully, our politicians will continue to be as open and honest moving forward.