Many braved the rain to queue on Friday morning.

As the Good Friday long weekend approached, travellers were warned of heavy traffic across the Singapore-Malaysia land borders.

Considering the long queues in Johor Baru (JB) last weekend, that was probably good advice — except that it was the turn of Woodlands to be packed.

Predictably, the crush started the night before Good Friday, and continued the next morning. 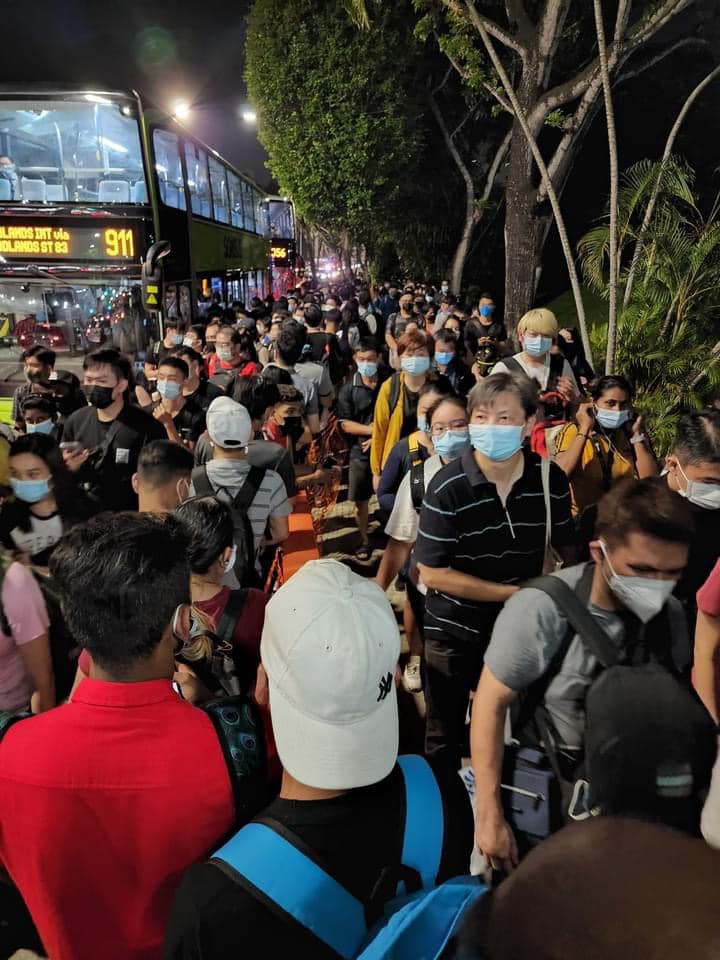 The crowd was so big that it led to the bus stop nearby being skipped.

As Malaysian workers in Singapore looked forward to the long weekend, many would’ve decided to head home to their families.

Singaporeans may have similarly decided to cross over to JB for some shopping and eating.

Thus, crowds started forming outside the Woodlands Checkpoint as early as 6.45pm on Thursday (14 Apr), according to photos and videos shared on the Malaysia-Singapore Border Crossers Facebook group. 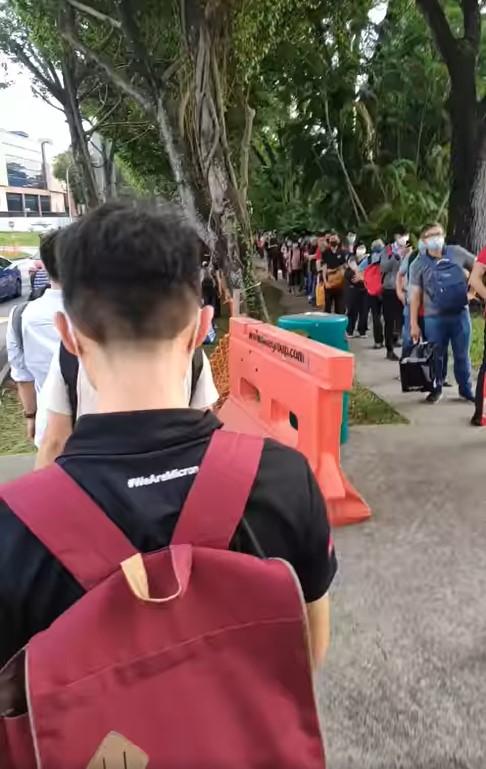 At 7pm, it could be observed that the queue had stretched out onto the pavement and grass patches leading up to the checkpoint. 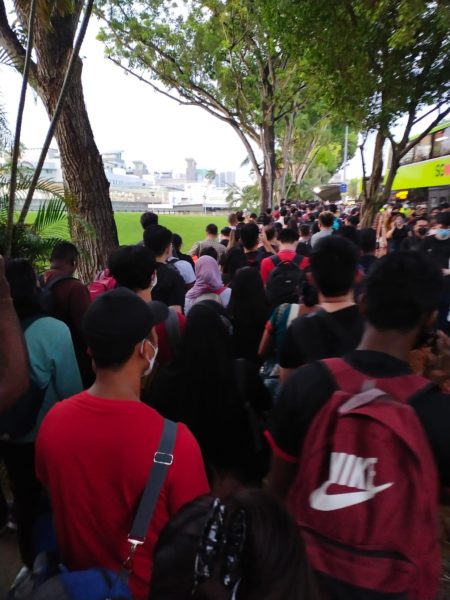 At about 7.26pm, the nearest bus stop to Woodlands Checkpoint was packed with people who’d just alighted. 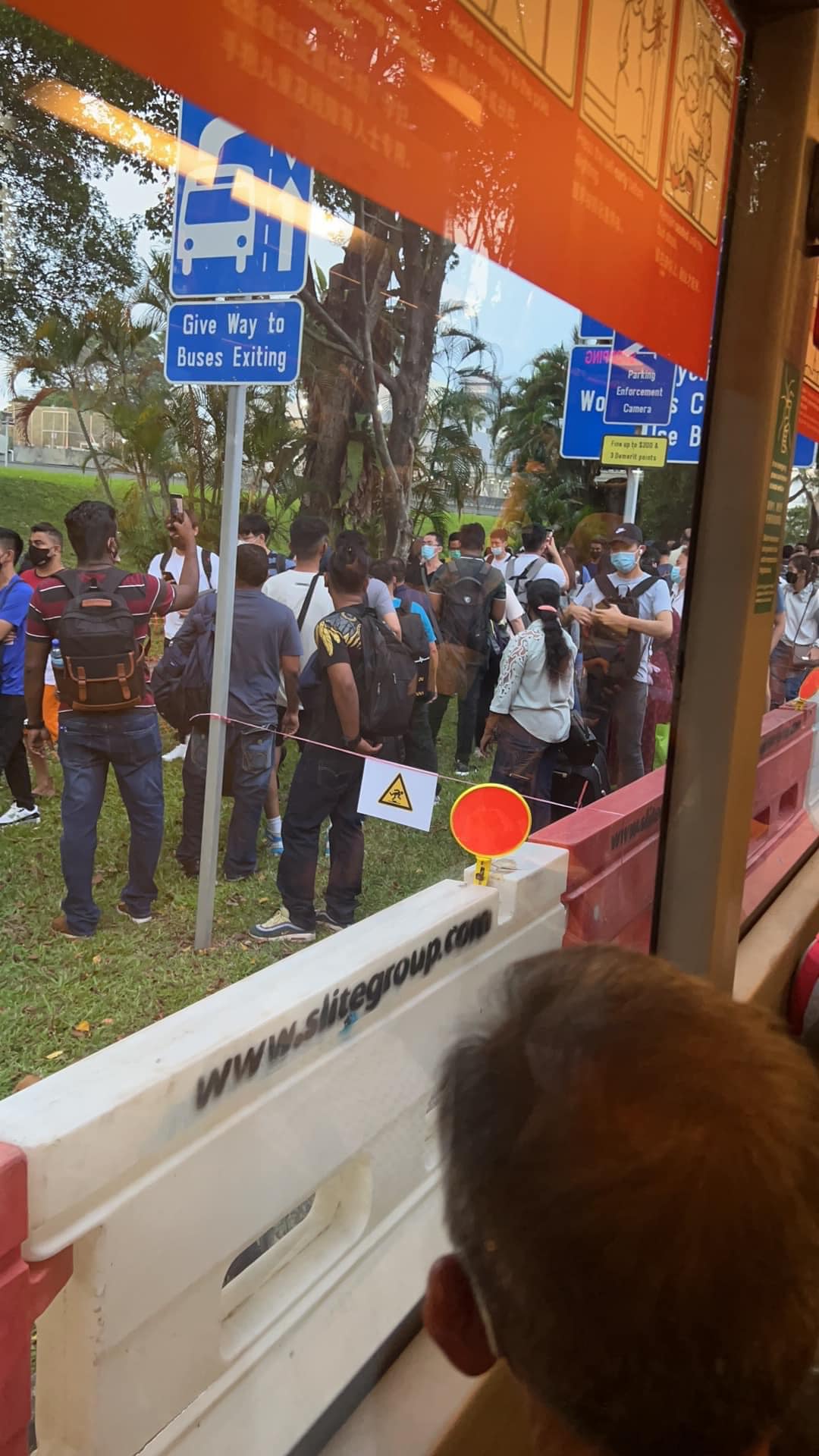 As night fell, the crowd persisted. At 8.15pm, the queue had folded in upon itself several times.

At 10.19pm, SMRT posted on Facebook that its buses would skip the nearest bus stop to Woodlands Train Checkpoint temporarily.

The reason was overcrowding along the road. 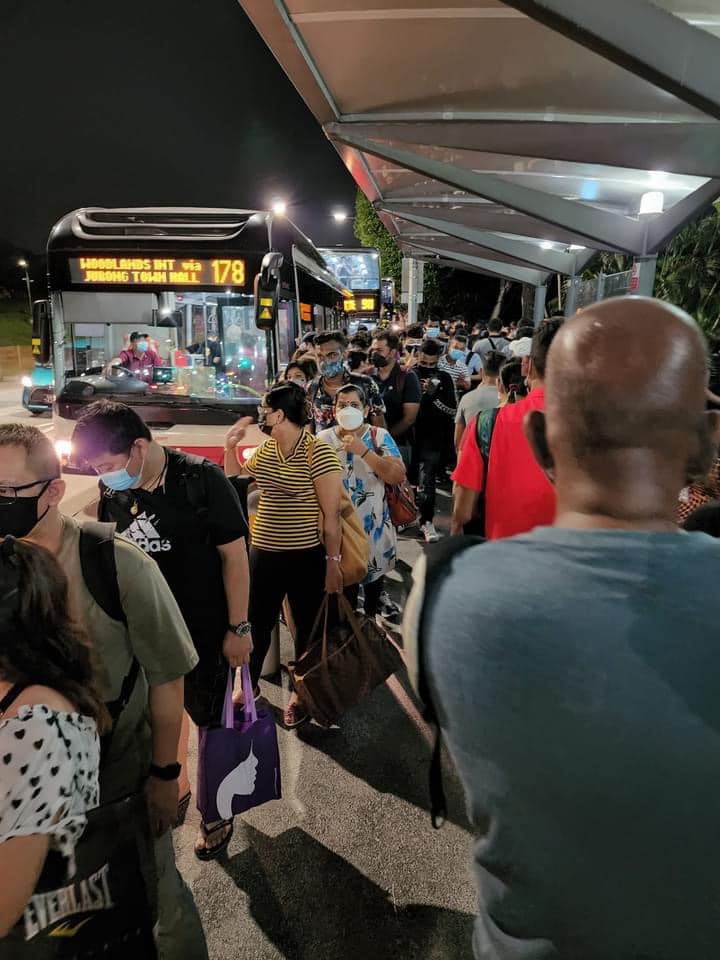 The queue just simply took over the bus stop. 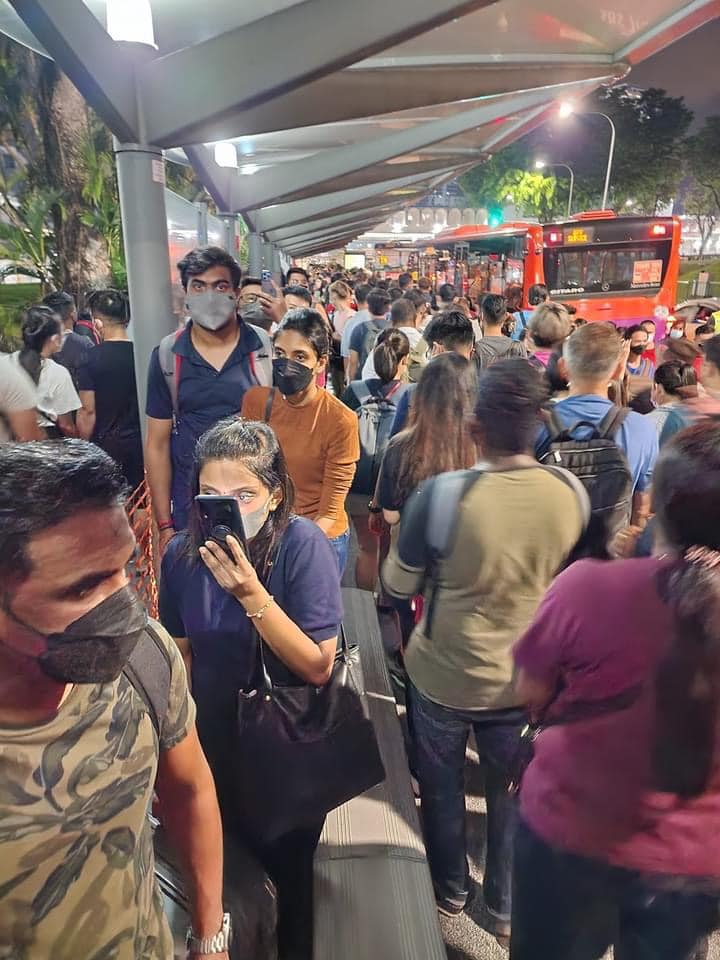 At 11.20pm, SMRT said they resumed bus services to the bus stop.

By 12.05am on Friday (15 Apr), the queue had thankfully eased significantly. 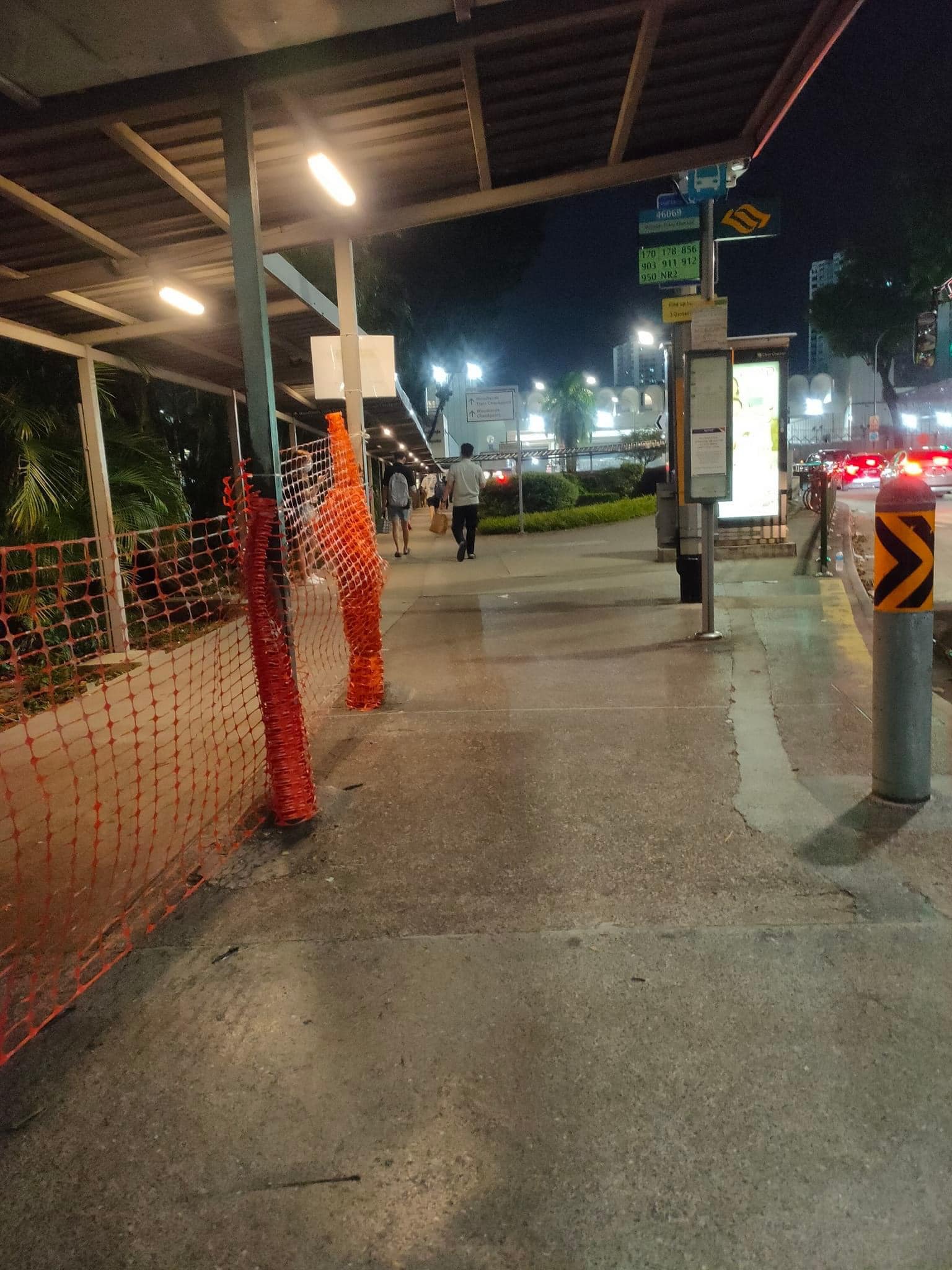 Perhaps heading out to the checkpoint early wasn’t such a good idea after all, as many people seemingly had the same idea.

More congestion was to come the next morning, though.

The long queue returned early at 7.40am on Good Friday, as travellers tried their luck again. 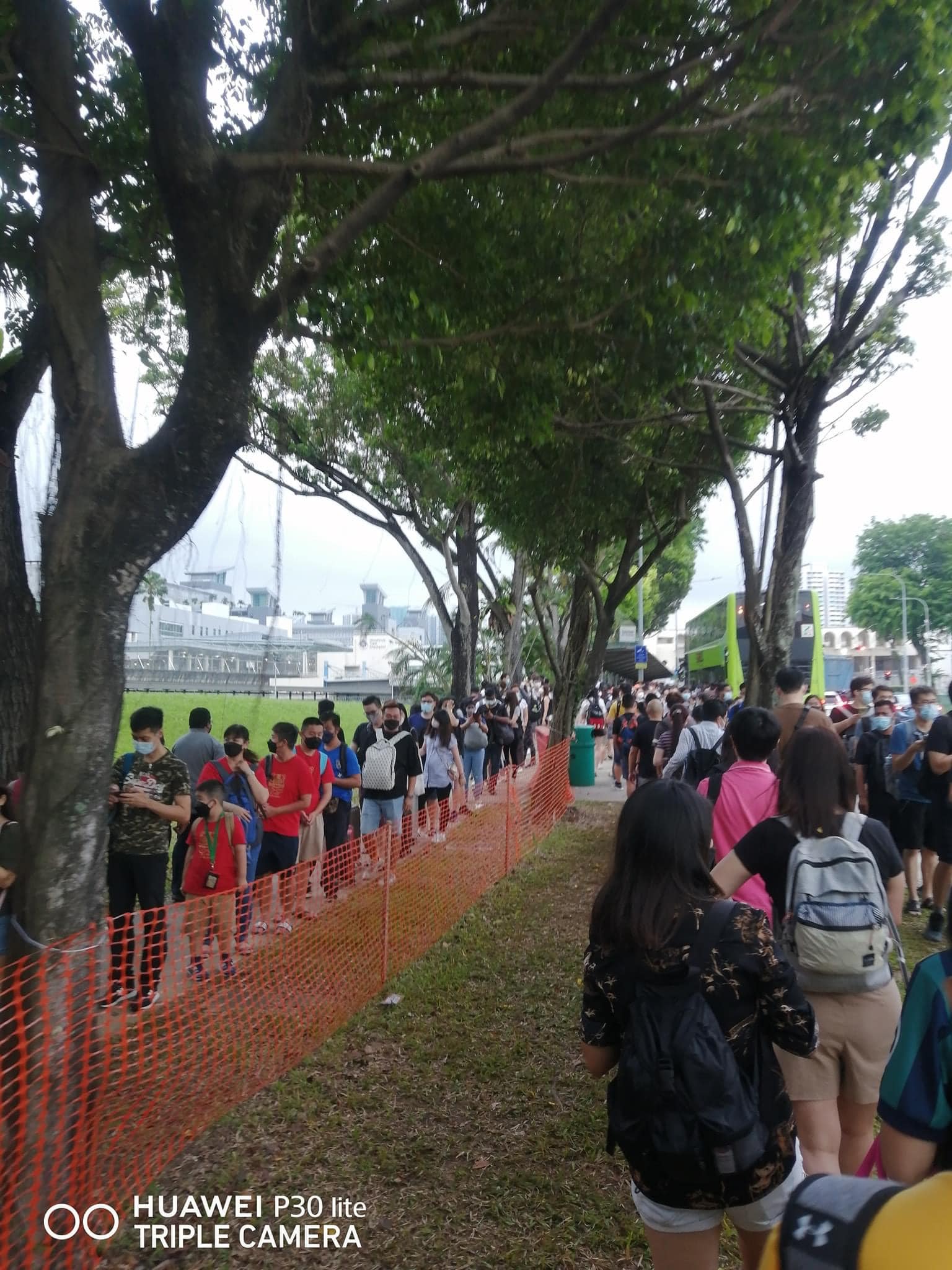 Source: FacebookBy 8.30am, the familiar folded queue had re-emerged. 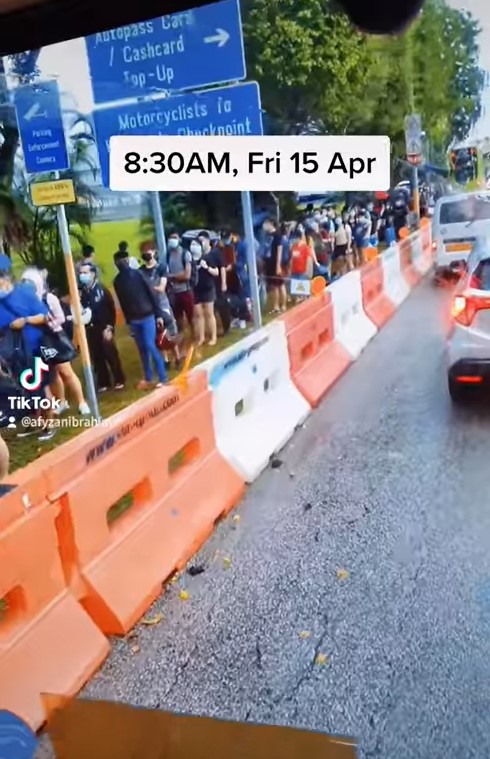 One netizen lamented that this round, however, queuers had to contend with rain too. 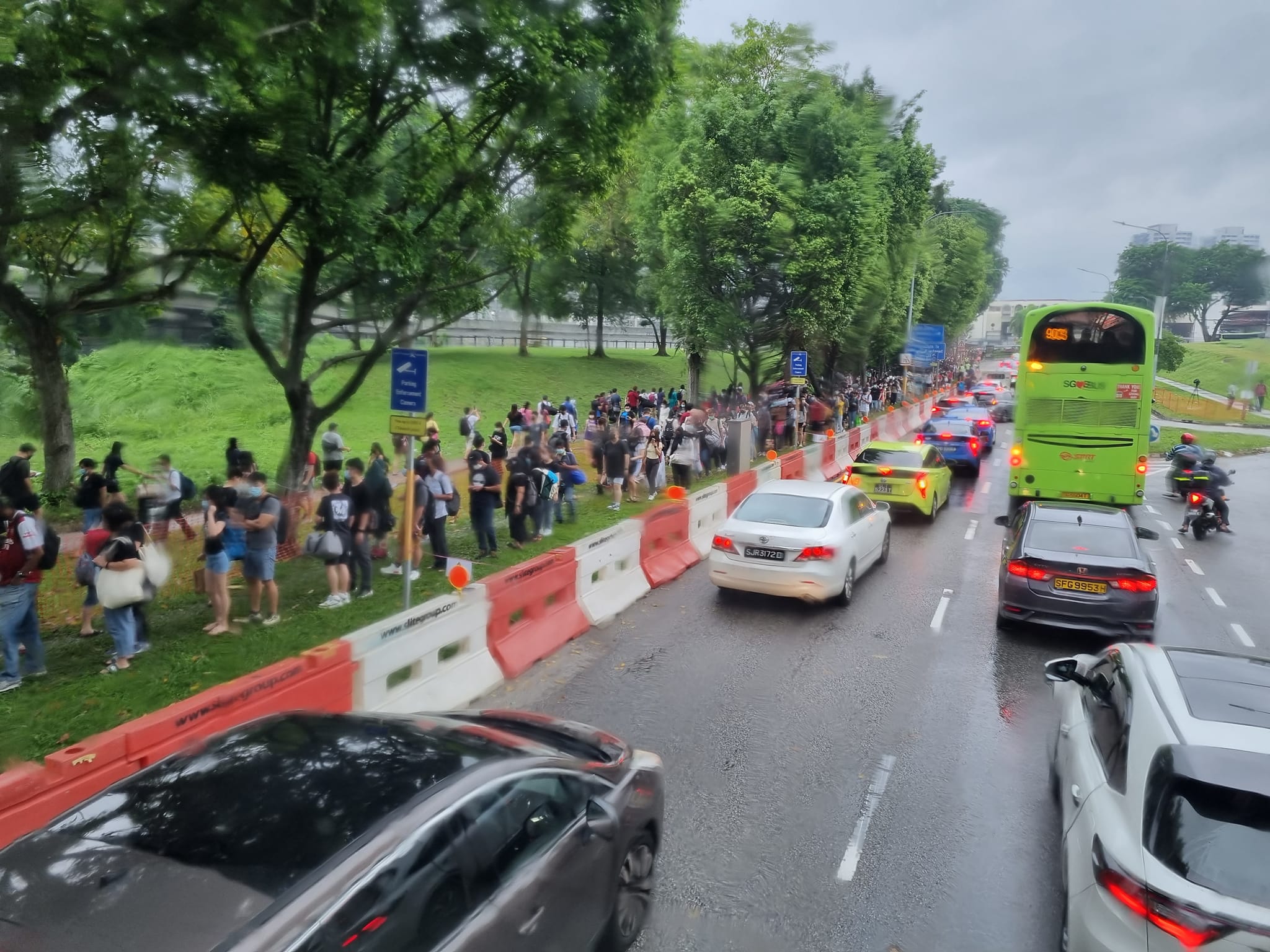 The bus stop was also back to its overcrowded self, though there was no word from SMRT about skipping the stop. 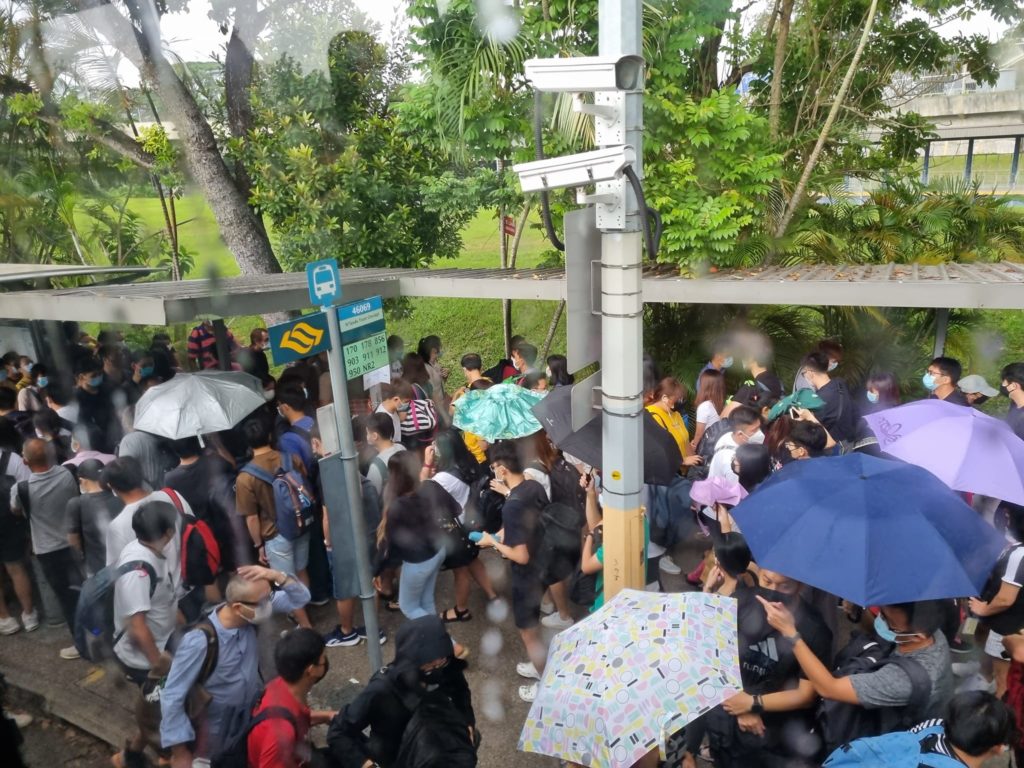 It’s uncertain how people managed to get off the buses, though, as the queue spilled over onto the road. 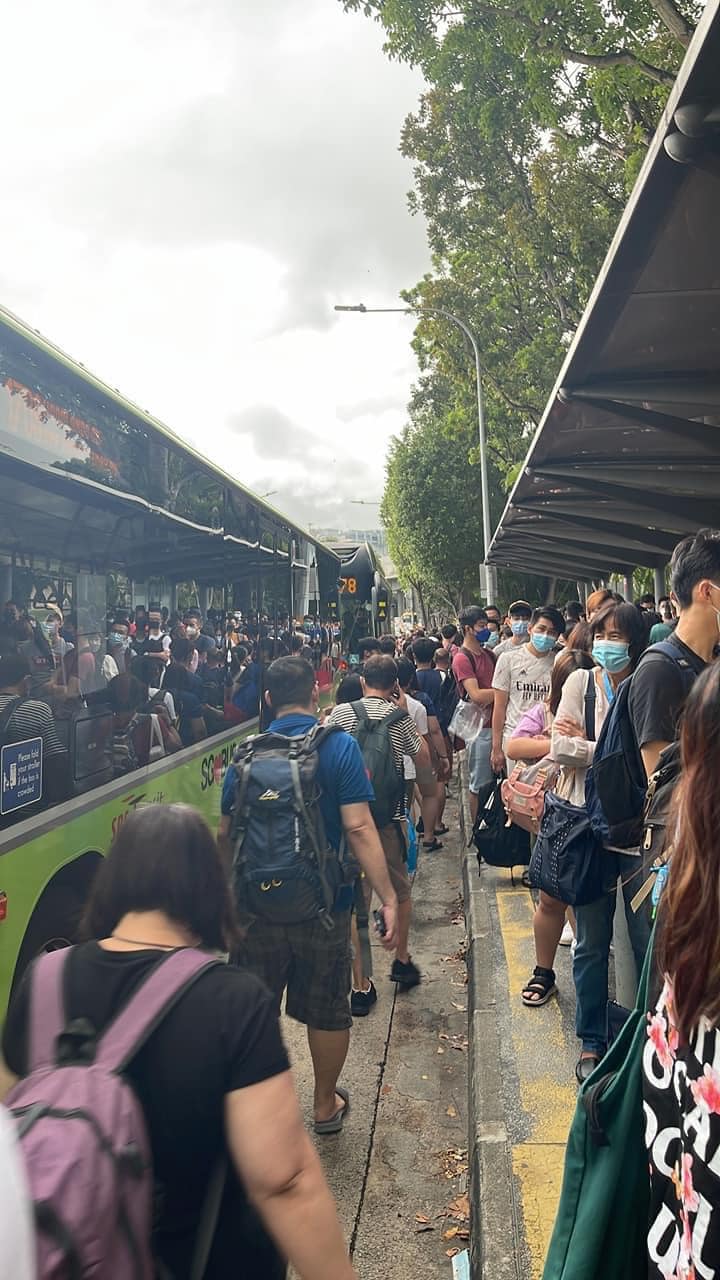 As some were carrying umbrellas due to the rain, it made the squeeze even more difficult to bear. 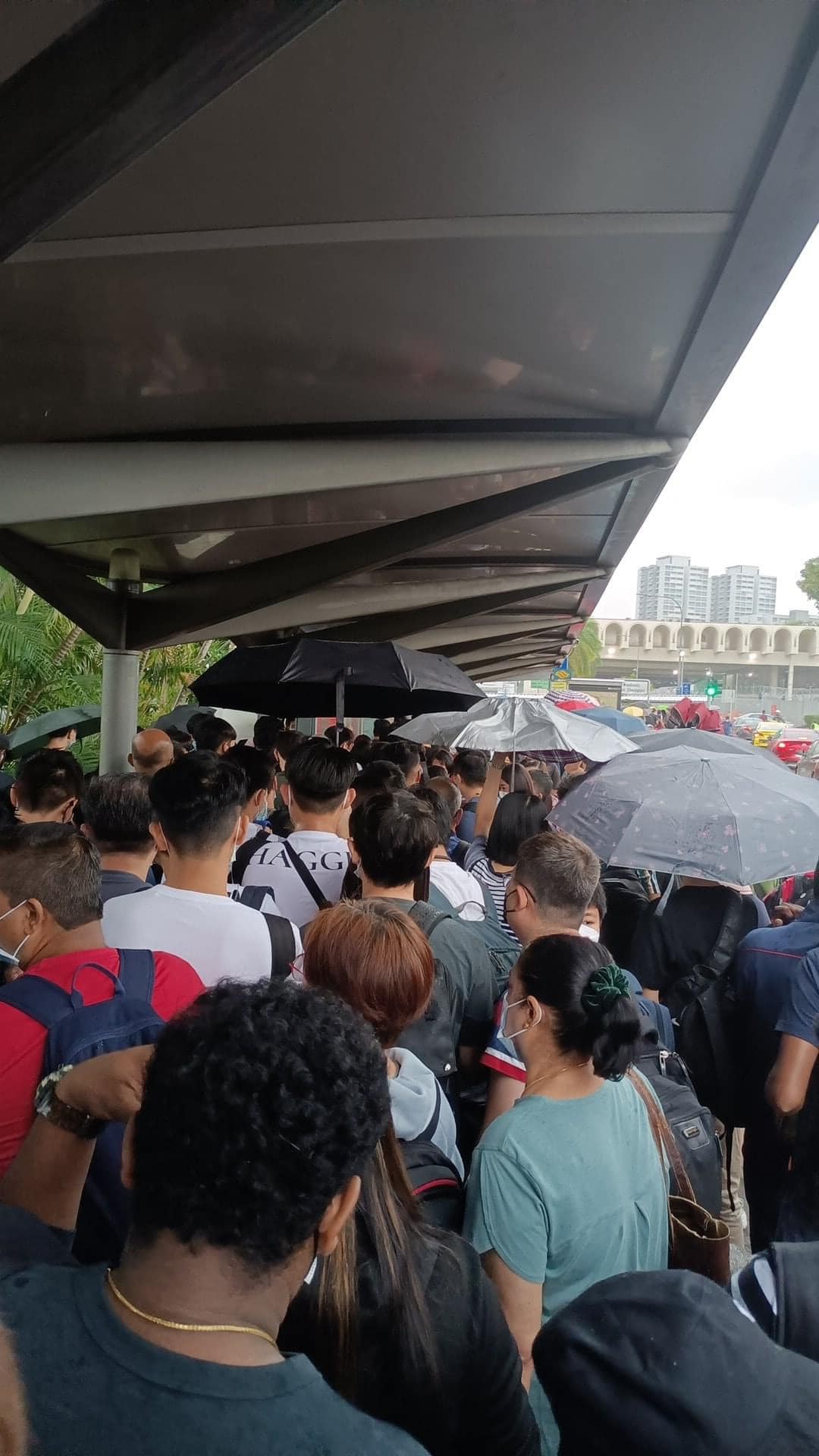 Thankfully, judging from another video, the queue at least seemed to be moving fast at 9 plus. 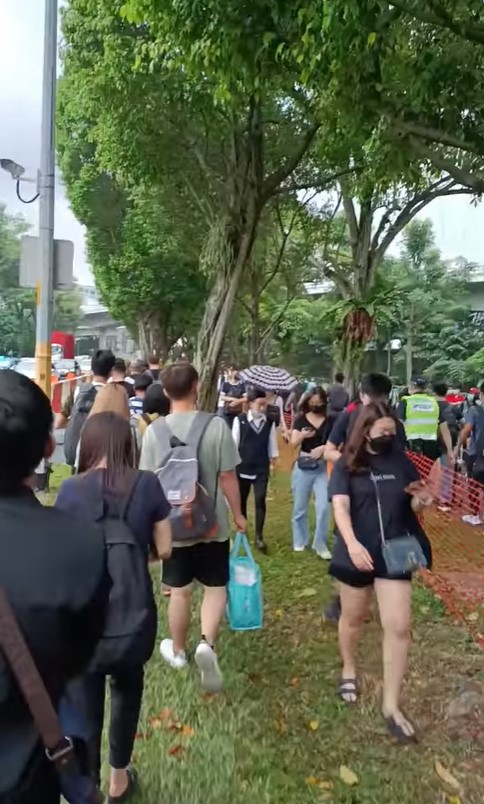 The crowdedness even extended to Marsiling MRT, were people queued to hop on buses to the Woodlands Checkpoint. Crowded in JB too

The crowds were not limited to Woodlands, though, with the immigration counters over at the JB customs side seeing long queues. 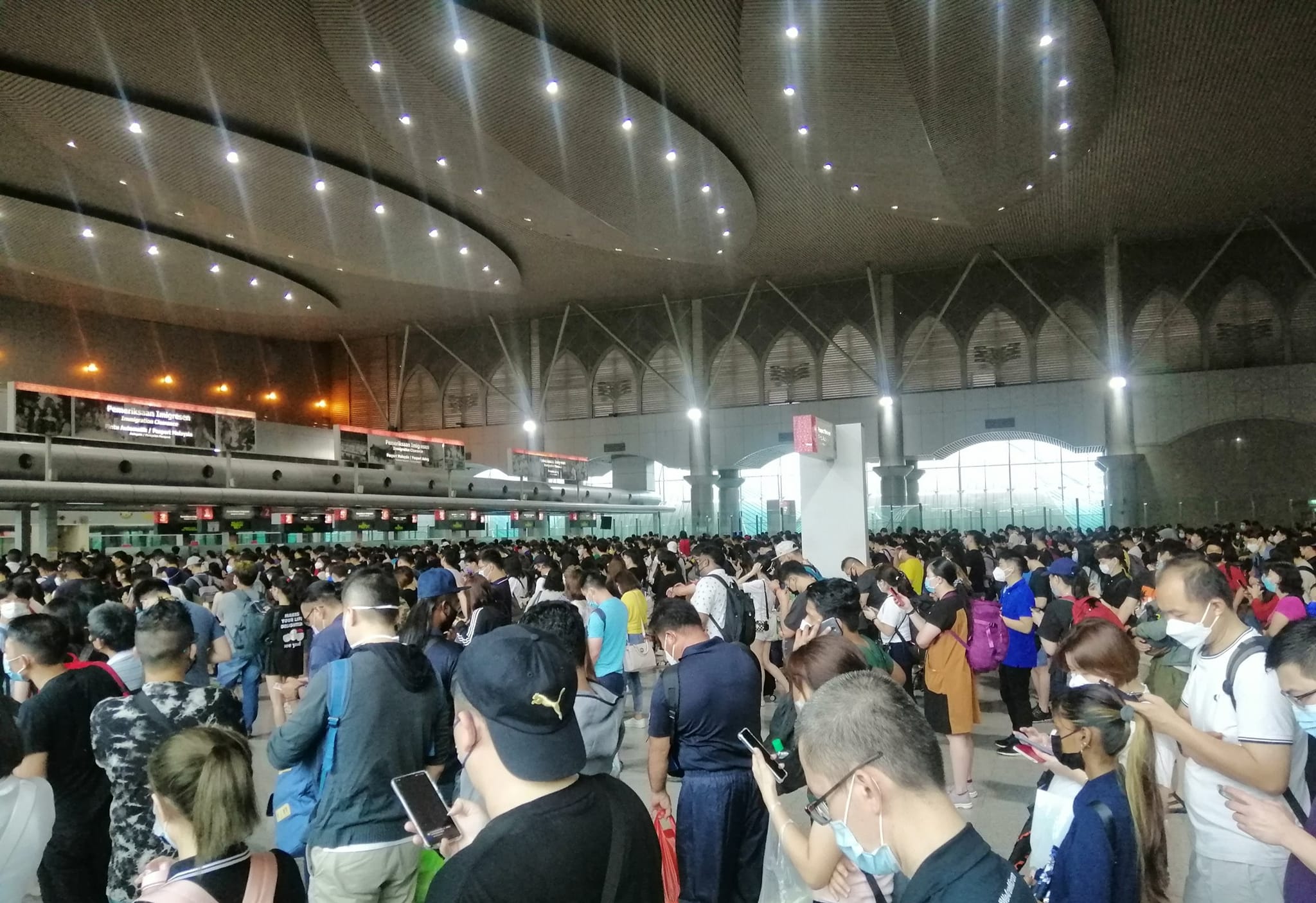 Meanwhile, the Causeway was also jammed with cars in the direction going to JB, while the direction heading to Woodlands was almost empty. However, at 10.04am, the Immigration & Checkpoints Authority (ICA) posted that the heavy departure traffic at Woodlands had subsided — referring presumably to vehicular traffic.

Due to the long weekend, it’s understandable that many would want to see their families and engage in some R&R, especially since the borders have just opened.

However, as you’re making the short journey across the border, do stay safe and remain orderly as you wait.

After all, nobody wants to spend the days off falling sick due to the rain or worse – injured from an accident.