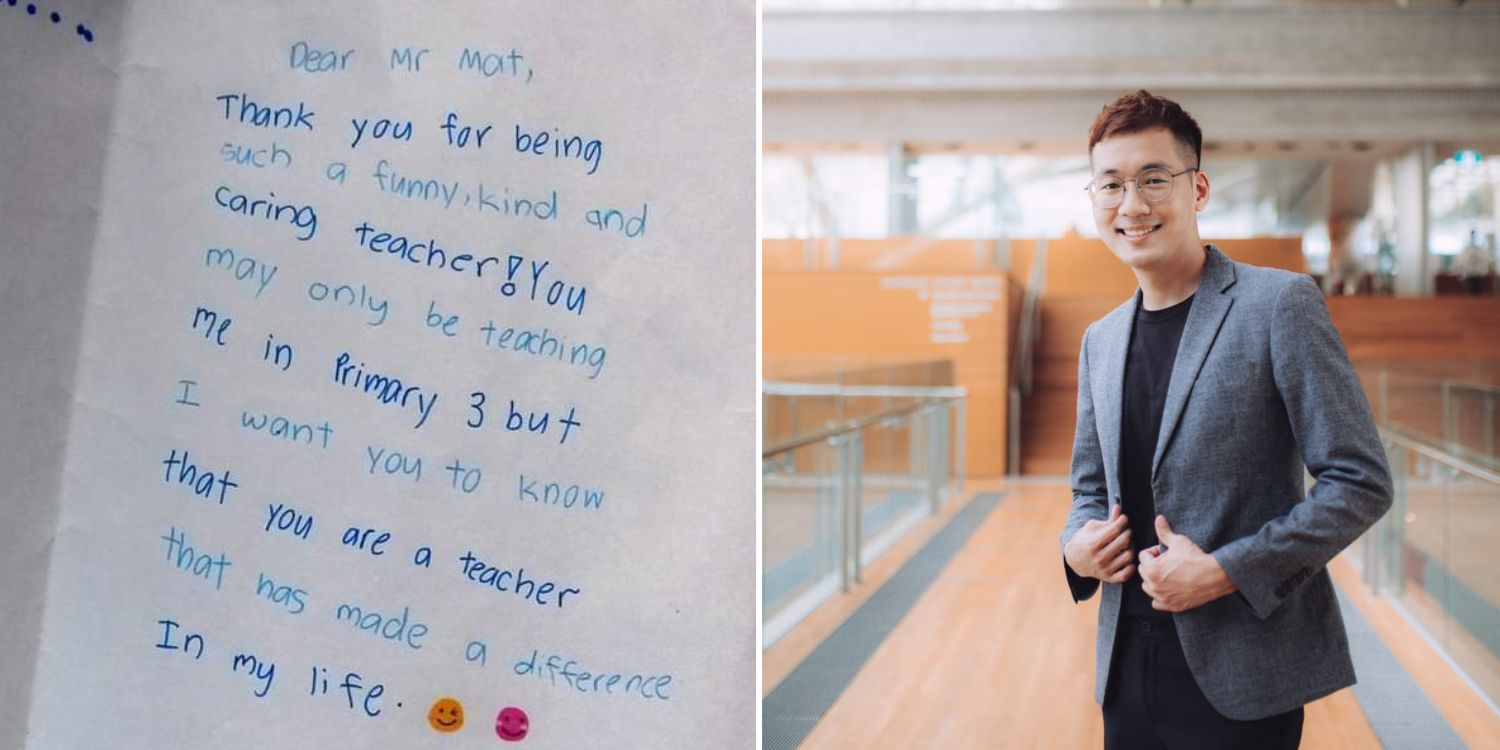 He once kickstarted a discussion among P3 pupils about the MH17 tragedy.

What do you want to be in life?

Forget your cookie-cutter template answers of what your uncles and aunties expect to hear at every family gathering. Dig deep, and be honest with yourself.

Have you ever thought, “I just want to be average. I want to live my life and be happy”? You’d probably love to say it out loud sometimes. Unfortunately, in Singaporean society, this answer would turn heads and have people wondering if you’re okay.

But not to Matthew Zachary Liu. The 33-year-old life coach has made it his mission to work with families and tell them why the desire to be ‘average’ and ‘happy’ is perfectly fine. He also does this by bringing real-world lessons to schoolchildren, so they understand better what life is like beyond textbooks and examinations and how to deal with failure.

Because in his view, students should know how to be emotionally healthy, which is way more important than achieving a string of As on their report cards.

If Matthew’s name sounds familiar to you, that’s likely because you may have chanced upon one (or several) of his poignant, evocative Facebook posts.

In the age of TikTok and fast-click content, Matthew still sees value in sharing long-form anecdotes that strike a chord with the community.

Just over a month ago, he inadvertently found himself in the limelight again – and on national TV – after writing about a stuck toilet bowl.

But beyond the apparent layer of superficiality, the story was meant to draw attention to a big-picture topic — paying for another person’s knowledge and skills.

Despite what his critics say (aiya, you just want to seek attention only one la), Matthew, who spent the last decade sharing his thoughts on social media, will never stop writing.

He will never stop wanting to plant seeds of new ideas in the typical Singaporean mindset, and he’s starting with one of the most enduring pillars that uphold our society — families.

Growing up in a household filled with hefty expectations

To have a deeper understanding of Matthew’s motivations, MS News had a two-hour chat with him over coffee, where he gamely spilt his life story, starting with his childhood.

Born to a Korean mother and a Singaporean father, Matthew grew up in a family that united not only two nationalities, but also a plethora of hefty expectations.

“In Singapore, you have kiasu parents. But in Korea, it’s a whole different level (of expectations). Getting into certain universities is a matter of life and death,” he said, adding that his mum lived by Korean standards even after migrating to Singapore.

“So to her, it’s like good is always not good enough. Why not be the best?” he chuckled.

Even though his upbringing appeared entirely engineered to achieve the typical Singaporean dream, he found his direction in life was nothing like what his mother expected it to take.

How a teacher inspired him to do better

In secondary school, Matthew became somewhat of a troublemaker, which at one point saw him getting reprimanded for talking a lot in class.

Recognising his ‘gift of the gab’, a school teacher then challenged him to become an emcee for a school event, where he mispronounced the guest-of-honour’s name, inviting ridicule from his peers.

As a result, his self-esteem took a nosedive. He went from being a troublemaker into an inactive student. “I felt like I didn’t want to do anything anymore.”

It was then that one teacher said something to him that made all the difference. “What are you going to do about it? Are you going to stay the same or change the situation, change the way people think about you?”

Needless to say, Matthew chose the latter. This teacher eventually went on to guide him so that he could turn over a new leaf.

She helped him discover and build on his strengths. And in turn, he ended up choosing to pursue communications in polytechnic and university in the hope of making a career out of it.

Emptiness of life in the media

After graduation, Matthew cut his teeth in the media industry, where he took on gigs as an emcee, hosting K-pop idol and youth events.

“I thought being in the glitz and glamour of the media scene was my passion because it seemed cool to be on stage.

“But the truth is, I felt empty deep down… like there’s no real meaning to it,” he said.

Coupled with the pervasiveness of social media at the time, he said it was challenging to see how people’s worths were often judged by their number of followers instead of their talents and values.

Unable to come to terms with such superficiality, the then 24-year-old Matthew confessed to feeling depressed and, at times, even suicidal.

He needed to get out because he realised that this wasn’t what he wanted to do.

Found it fulfilling to teach students

But what else would he be doing if not pursuing the jobs he studied for? Like every confused person in their early 20s trying to figure out adulthood, he hadn’t the faintest idea.

While secondary schools usually preached a one-track path to success, Matthew, in retrospect, felt that students were not given alternative perspectives.

There are many pathways in life that could lead to different versions of success.

And it was through exploring on his own in the dark woods that he found his calling in a classroom, filled with wide-eyed, impressionable minds who were ready to learn.

“I started working with a bunch of kids in class and found it fulfilling,” he said. One thing led to another, and he eventually became an educator. 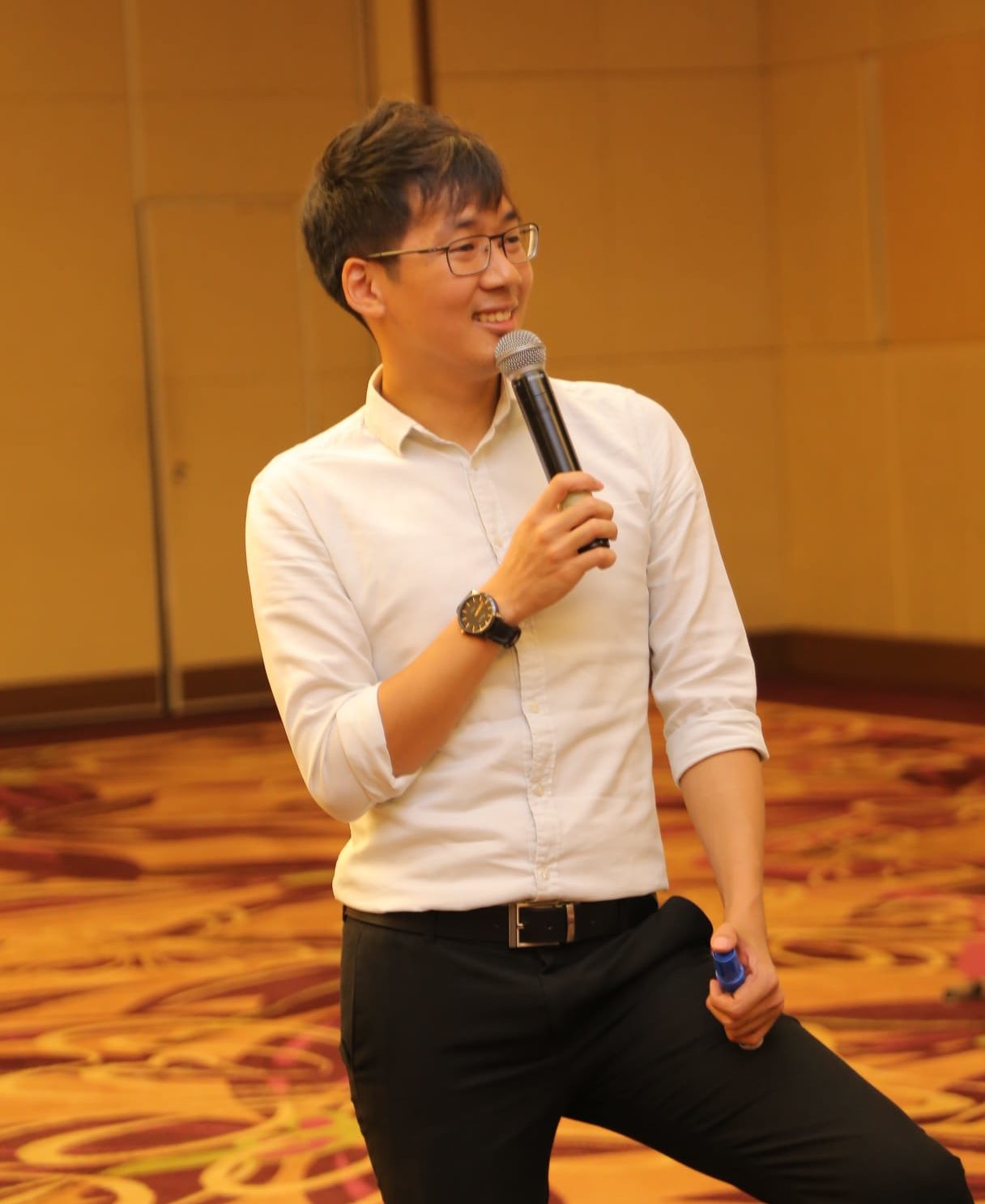 His experience with feeling lost reaffirmed his belief that there was a real need to teach life and leadership skills, so students are prepared for the harshness of reality.

For instance, he had just started teaching a P3 class when MH17 was shot down, claiming the lives of all 298 people onboard.

You’d think that nine-year-olds are unable to fathom the depth of such grief. But to Matthew’s surprise, they could. And more importantly, they could take home life-changing lessons on empathy.

“I got them to reflect and discuss what empathy was all about. Some might have thought, ‘oh, it’s a Malaysian thing’. But what if it happened to an SQ flight?

“It could’ve been someone we know, like our parents and friends. This is why I also needed them to learn how our words could affect someone,” he said. 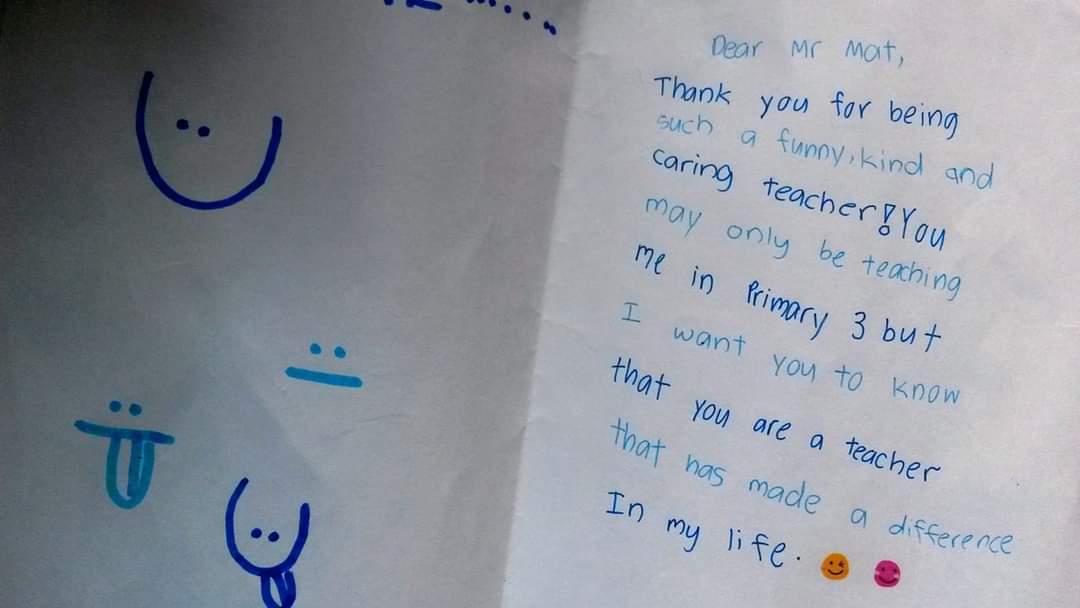 A thank-you note written by a P3 pupil, telling Matthew how he made a difference in their lives
Image courtesy of Matthew Zachary Liu

As wholesome as it may be, Matthew’s decision to open up the grim conversation in class did not go down well with certain parents.

“They’d say, ‘Why are you talking to kids about life and death?’ Then they didn’t want me to teach their kids anymore,” he lamented, adding that certain schools did not wish to court such controversy.

Little did Matthew know that his Facebook posts, which chronicle some of his most significant moments with his students, like the MH17 discussion, incurred disapproval too.

Matthew explained and maintained his stance in his interview with us, stating that he came from a good place.

“All these are raw and real teachable moments within the classroom that we can all learn from, which is why I share these anecdotes,” he said.

Current generation suffers differently from the ones before them

Taking his leave from schools, he decided it was best to walk his own path. Hence, he’s now self-employed, working as a life coach.

“I don’t blame the schools. I have a few teacher friends myself, and I know how hard they’ve worked just to educate the students. What I want to achieve is just different from what the system can offer, so it’s better this way,” he said.

After working with families for a year, Matthew discovered that parents don’t realise how the younger generation grows up under different circumstances, so they suffer differently, too.

Sharing his thoughts on larger, systemic changes that are overdue, he said parents and teachers must understand that they live in an evolving world. So the way they educate the young should keep up as well.

“Schools teach us to succeed. But students don’t know how to handle failure. It destroys them, and that’s very sad to see. They’re constantly reminded that they’re not doing well until it becomes part of their identities.

Matthew has a few words of advice on how parents can support their children. Drawing inspiration from his own experience of growing up in a household filled with sky-high expectations, he said it’s important for parents to form an emotional connection with their offspring. 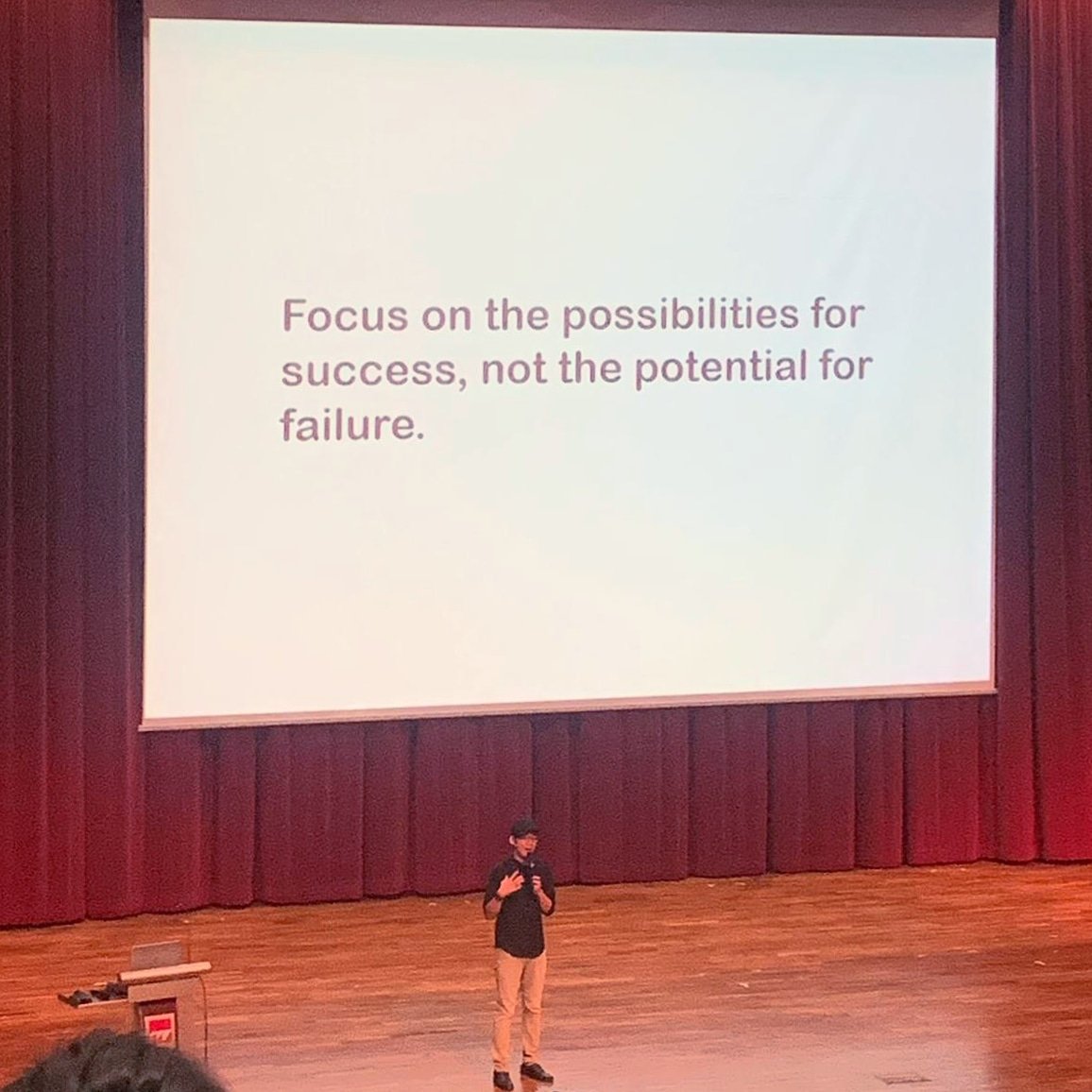 “Grown-ups have their stressors, so it’s easy for us to dismiss their problems by telling them it’s just a ‘small thing’.

“But it’s significant to the children. They’re experiencing difficulties for the first time, and they don’t know how to deal with it,” he said.

There are dangers to dismissing your kids, as Matthew noted. “They’d feel their problems are insignificant.”

Parents mustn’t forget that this younger generation grows up connected to their phones. As a life coach, Matthew said one of the main issues he observed parents have with their kids is that they don’t know how to communicate or connect. 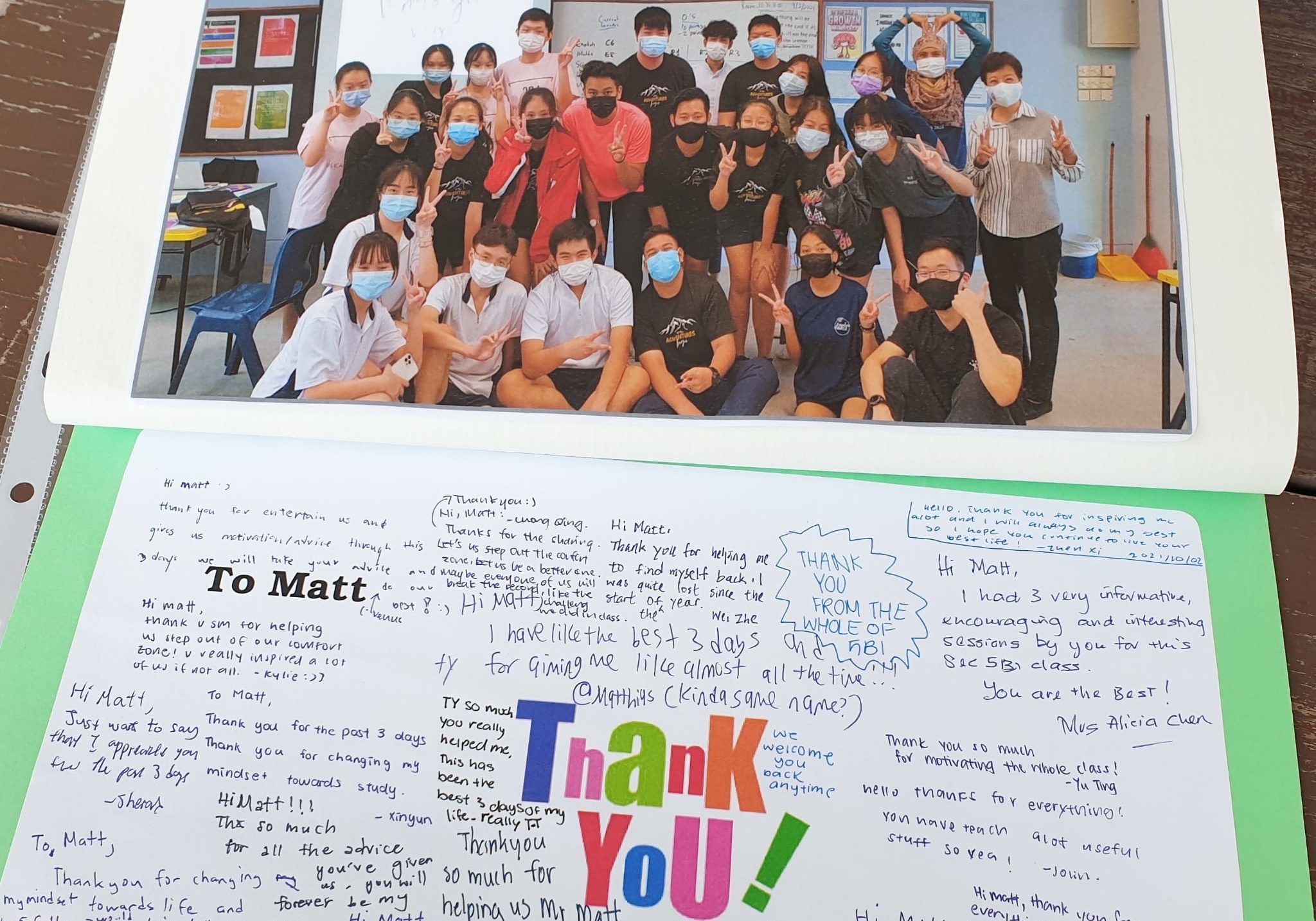 Overexposure to social media has its up and downs, and has incepted a culture of acceptance with their peers. The youngins would then start seeking validation from the Internet instead, growing the distance between them and their parents further.

If left to fester, Matthew warned that the distance would eventually be difficult to salvage.

Instead of trying to control them, we should connect with them. Instead of telling them what to do, let them explore.

“Offer them choices, so they can learn certain things the hard way. Because then, they’ll know about consequences and accountability,” he said, adding that parents can continue guiding their kids on the sidelines.

No doubt, parents would feel the need to control and advise their kids because they have the best intentions. “But sometimes, parents must take a step back to converse with their child. What’s best and what the child wants are two different things.”

To parents inclined to push and pressure their kids to achieve stellar results, Matthew has this to say: “Would you rather your child be alive and happy? Or academically successful but miserable every day?”

Reconciling with his mum

After spending some time trying to help other parents cultivate a healthy relationship with their children, Matthew was hit by an epiphany about his own ties with his mum.

He realised that he had grown up not understanding her. “Our parents were not taught to parent. Sometimes, they make mistakes because they’re also figuring things out.”

Admitting that he used to resent his mother for enveloping her clutches around his life so tightly, Matthew decided to move out one day with the intention of cutting ties.

“After a few months of not speaking to them, I went home one day to visit. My brother told me that ever since I moved out, my mum has been going into my room, crying every night.

“I didn’t know my decision to move out hurt her so badly. It made me reflect and try to understand my mum. And that’s when we finally reconciled,” he related.

One of the saddest things to happen to parents is when their child feels miserable and cuts ties with them.

So to all parents out there, Matthew stressed that at the end of the day, both parents and children must acknowledge and accept that their definitions of success may differ.

But whatever their definitions may be, happiness should be a common goal that both can share.

Know more inspiring individuals like Matthew? Get in touch with us via email at news@mustsharenews.com.