Singapore Tourism Board revealed on Monday (29 Feb) that tourists spending in Singapore fell about 6.8 percent to $22 billion in 2015. 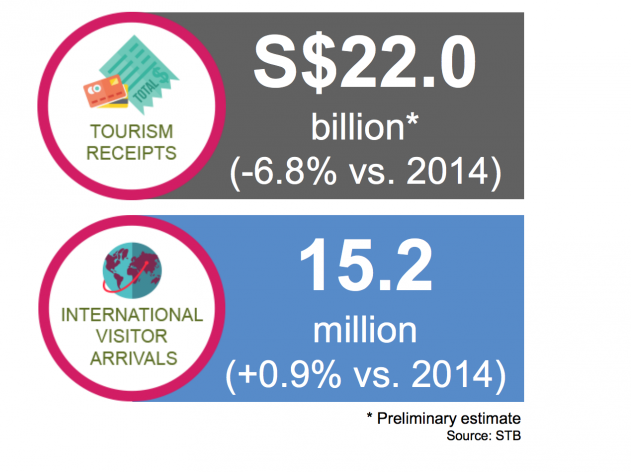 The dip in tourism receipts was mainly due to fewer business travellers and their lower spending per person, reveal the preliminary estimates by STB.

There was a six percent fall in the number of business visitors and meetings, incentives, conventions and exhibition (MICE) arrivals.

Despite years of building up glitzy malls, casinos and the night Formula One race, visitors spent less on shopping, accommodation, transport, sightseeing and gaming between January and September 2015 than in the previous year. The spending on food and beverages grew 1 percent. 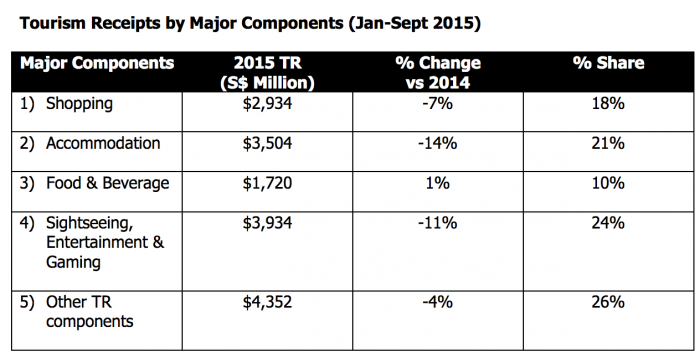 With Singapore relying on tourism for 4 percent of its economic output, STB said it expects tourism receipts to grow between 0 and two percent or within the range of $22 billion to $22.4 billion in 2016. STB also forecasts tourist arrivals to grow between zero and three percent, at 15.2 million and 15.7 million.

STB also mentions that one of the challenges Singapore faces is the slower global economy and increasing regional competition. To tackle that, one of STB’s plans is to enhance Singapore’s attractiveness with more cultural experiences and showcasing Singaporean talents.

Featured image via Pixabay
With reference to Singapore Tourism Board