Must Share News – Independent News For Singaporeans
Home Lifestyle Branded Content We Examine S’pore MRT Lines To Figure Out Which Routes Make Your... 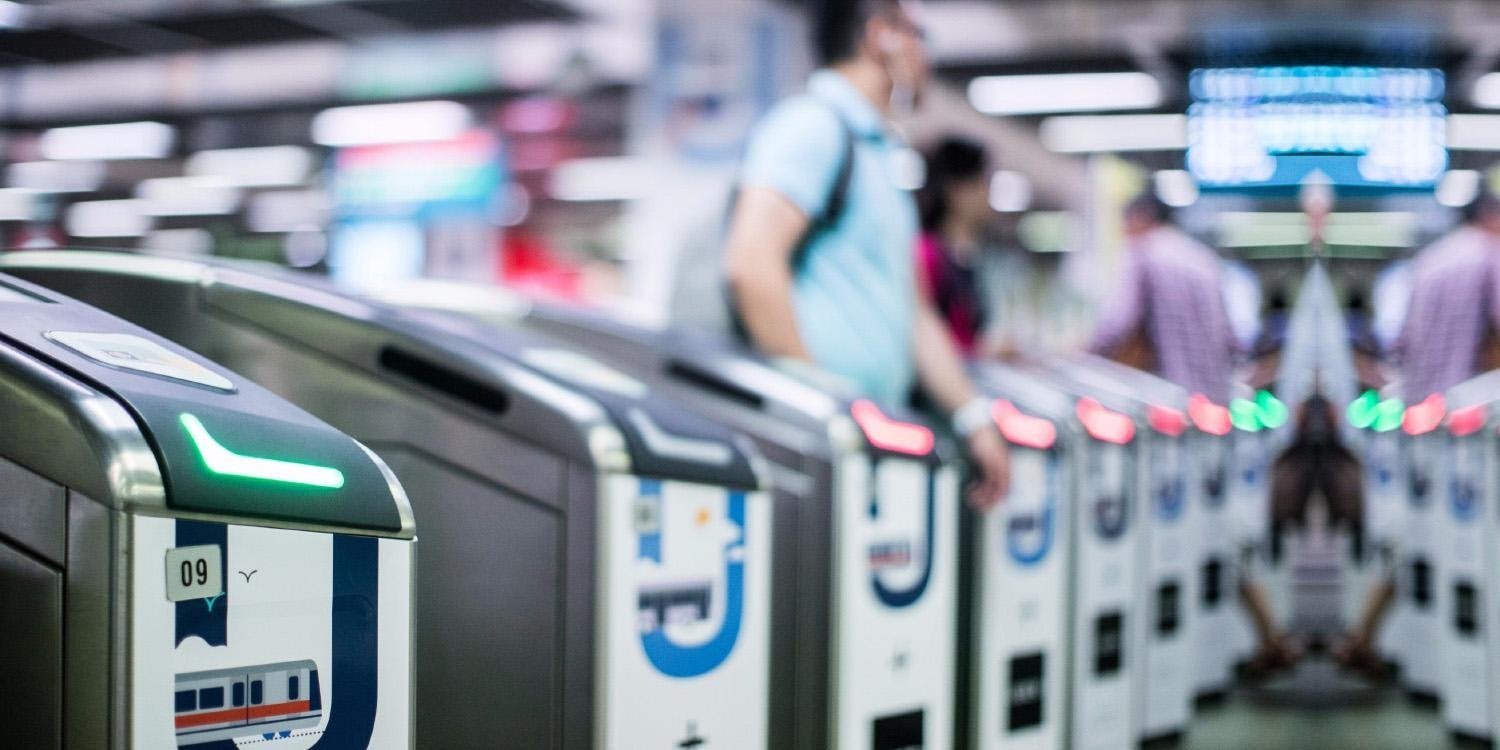 Planning a meetup with friends from all corners of the island can be challenging when you have to consider everyone’s commutes.

To ensure travel distances are roughly similar, a central location like town is often the go-to option. But this doesn’t always have to be the case.

With an abundance of MRT lines that snake from all ends of Singapore, getting around via public transport – no matter where you live – is more convenient and affordable today. 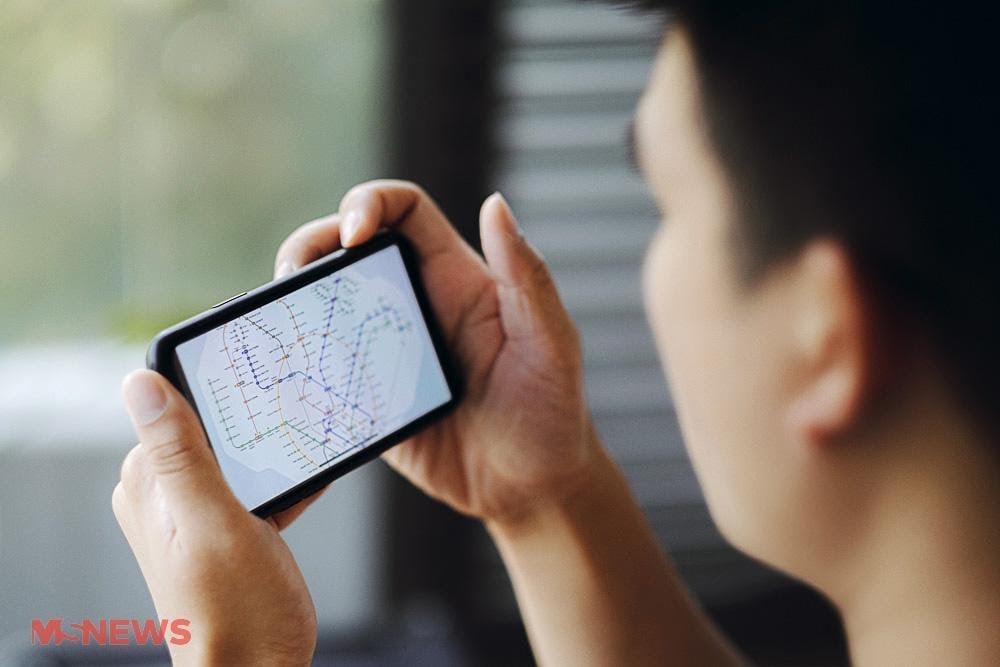 To put things into perspective for you, we’ve consulted the experts on this so you’ll know how to make the most out of our MRT routes.

Using Downtown Line as an example, let’s take a look at how journeys to destinations like Newton, Tampines, and Toa Payoh are more efficient now — and how fares are charged.

A good example of how railway network expansion made a drastic difference in travelling time – ultimately leading to lower fares now – is getting to Botanic Gardens from a central location like Newton. 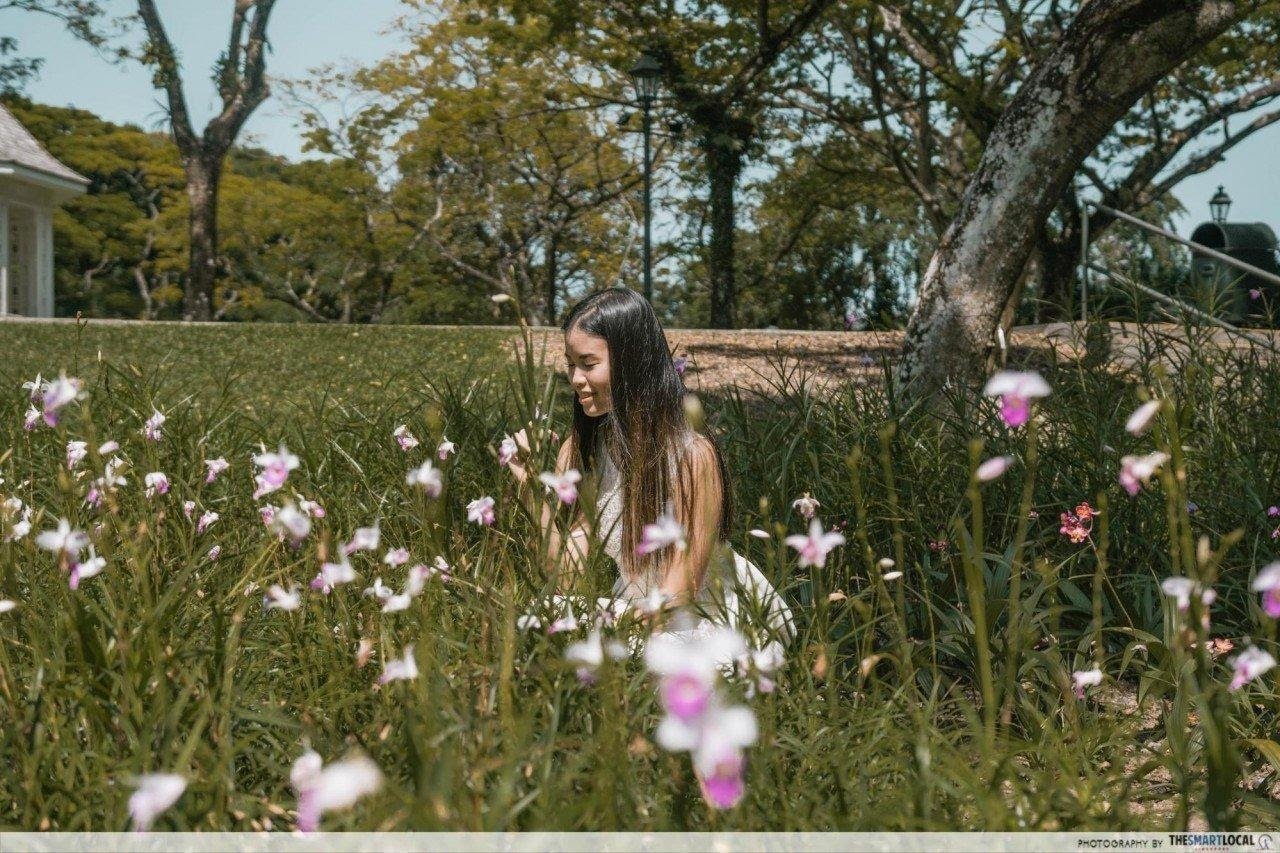 If you love soaking up greenery, the Downtown Line ensures that you and your fam won’t have to travel far while lugging a heavy picnic basket.

The line brings you to the doorstep of the UNESCO World Heritage Site in the central region, just a 6-minute train ride away from Newton. 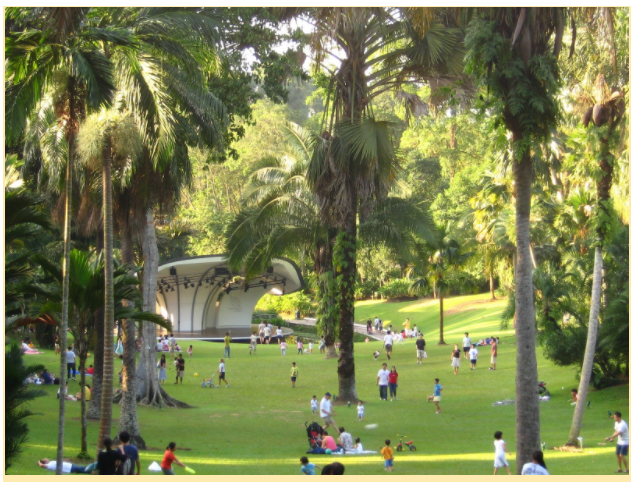 Gone are the days when you had to travel 4 stops up to Bishan and another 3 stops on the Circle Line to Botanic Gardens.

On the Downtown Line, the sprawling verdant garden is just 2 stops away from Newton, reducing the 11.3km journey to 2.7km. 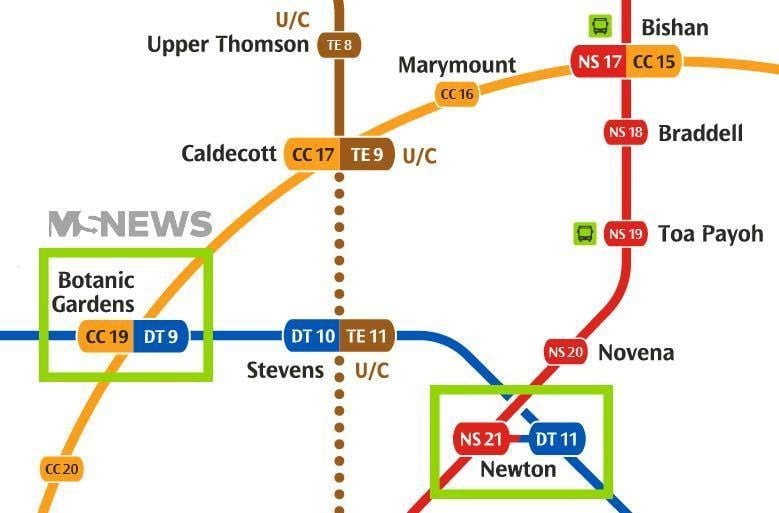 This saves you $0.64 per journey now. So if you’re travelling there every weekend, you’re looking at fare savings of $5.12 in a month for the journey to and fro, after the Downtown Line was built.

Going to Holland Village for quick pints via MRT

For those with steady lepak kakis who often ask “tonight go where ah?” every Friday night, Holland Village’s nightlife district is one of the more happening places in Singapore after sundown.

With so many restaurants nestled close to one another, you’ll be spoilt for choice when it comes to picking a good spot. 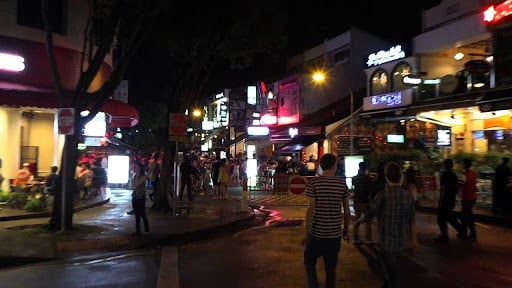 As you prepare to indulge, let’s help you get ready for the journey there, especially if you’re coming from Toa Payoh.

Travel down south from Toa Payoh to Newton, switch to the Downtown Line to Botanic Gardens, and be on your merry way to Holland Village via the Circle Line. 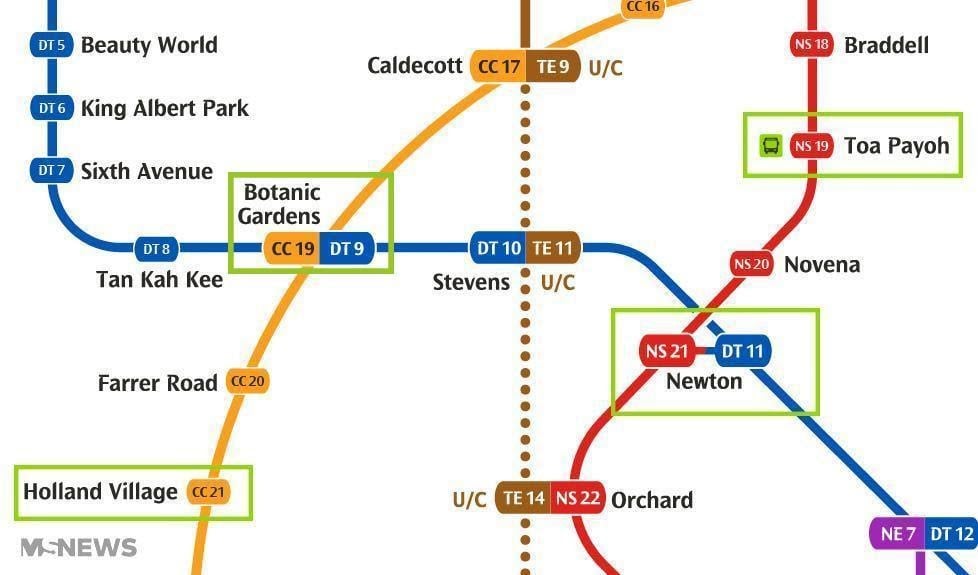 Because of the Downtown Line, you’ll be travelling 3.4km less than the usual 11.2km route of travelling up north to Bishan and switching to Circle Line.

But even so, regardless of which route you choose, one thing’s for sure — fares are $0.14 cheaper now compared to pre-Downtown Line days.

If you’re there every Friday to chill after work, you’re paying $1.12 less – both ways – in a month.

Since its construction, Our Tampines Hub (OTH) has proven to be a popular spot not just for exercise enthusiasts, but also families seeking a bit of R&R.

Before the Downtown Line, Bishan residents can recall a rough 35-minute journey via the Circle Line to Paya Lebar, followed by the East-West Line to Tampines. Now that we have the Downtown Line, commuters can shave off at least 5 precious minutes which they can use to chope seats for the fam at the Festive Plaza.

Just travel from Bishan to MacPherson via the Circle Line. Then, transfer to the Downtown Line and swiftly make your way to Tampines.

The Downtown Line not only shortened travel time, but also resulted in a saving of an additional $0.12 per journey since it was launched.

In some cases, the new MRT routes mean no more lengthy bus rides that may be susceptible to traffic conditions on the road.

Case in point, before the Downtown Line, Easties had to make an hour’s journey to get to Chinatown as they needed to take a bus to the Tampines interchange before getting on the train. 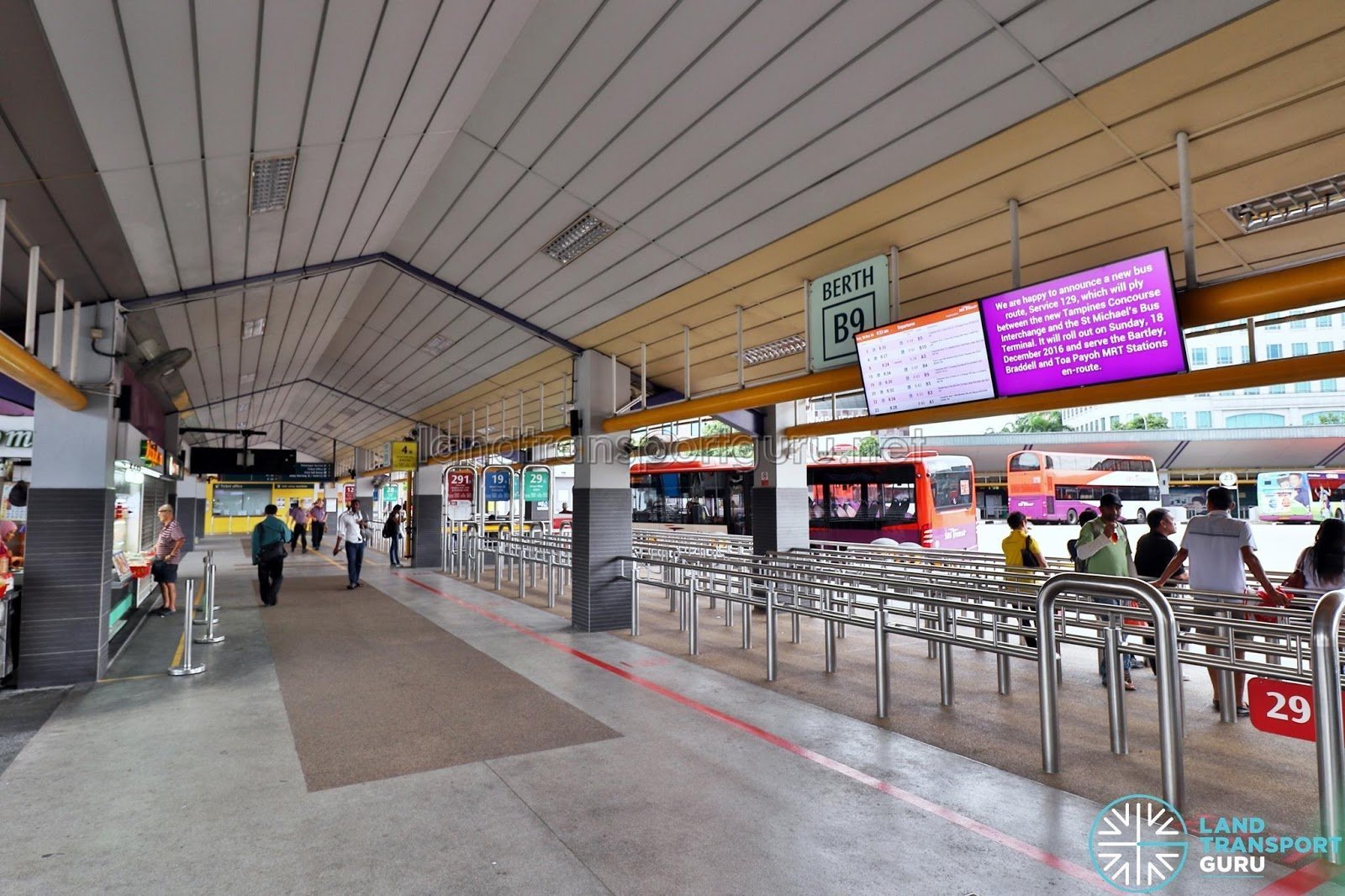 With the Downtown Line, they now have a direct train service from Tampines West to Chinatown, just around a 30-minute ride.

Say goodbye to long road rides, as well as the hassle of transferring from bus to train before reaching the end of your journey. Easties are happy to have their own representation for routes towards the Central Business District (CBD).

Commuters will always be charged based on shortest distance

Despite common perception that public transport fares are ever-increasing, this is actually how it works — the more lines we have, the better our savings in terms of time and cost.

The system ensures commuters are always charged based on the shortest distance via train. This is regardless of the MRT routes you pick to travel on— old or new. 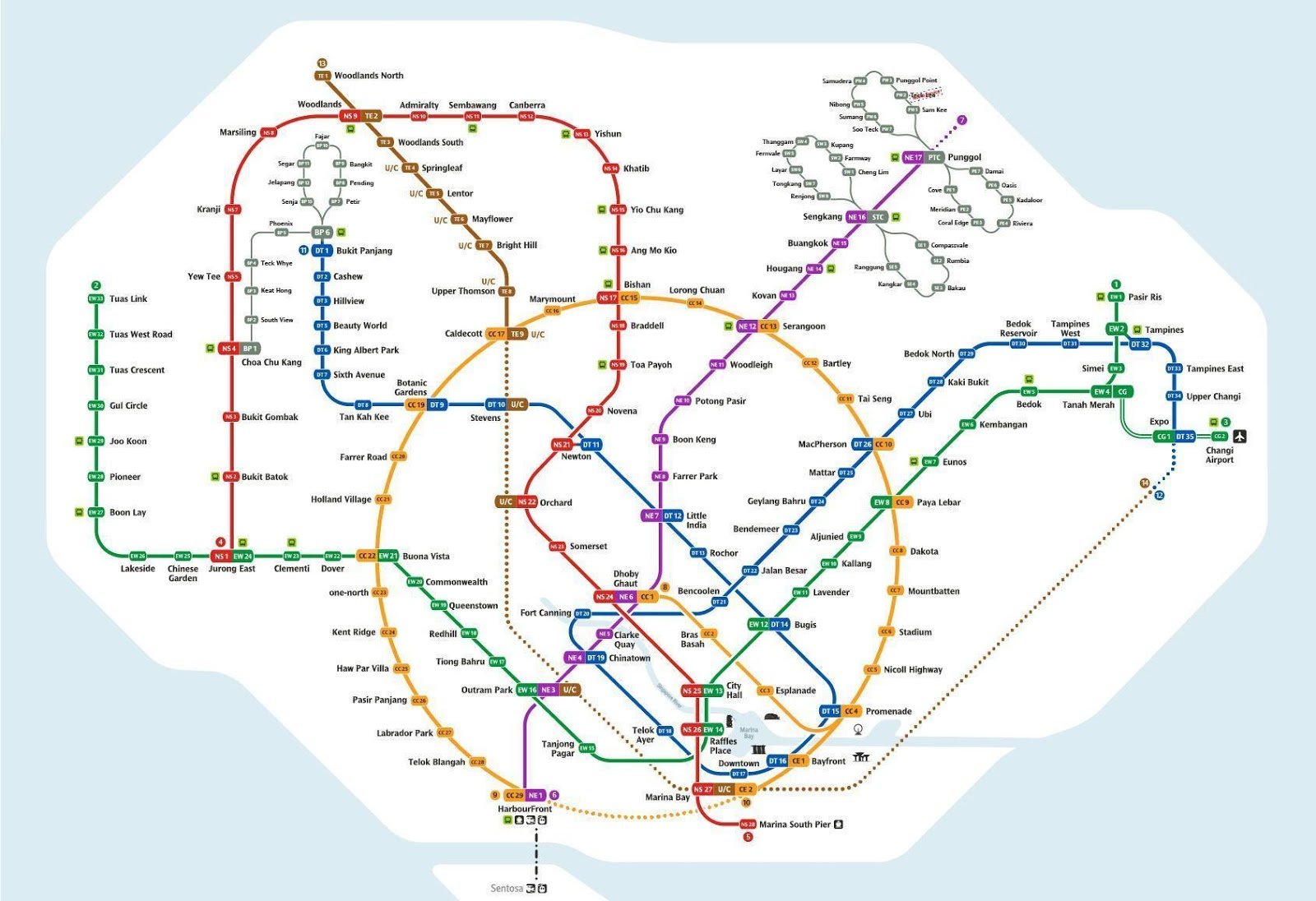 With every new line added to our railway network, you may get even more fare savings in the long run because distance for certain routes are potentially cut down as well.

So even if you’re taking the long way from A to B via older lines now, you will always be charged based on the route of the shortest distance, thus the lowest fares.

With MRT expansions, those of us constantly making plans to jio our friends for hangouts can appreciate how all 6 lines are well-connected especially at popular interchanges.

Singapore isn’t stopping at just 6 lines, for sure, as there are more to come from 2021. And for every trip you make, you’ll know there will always be one that meets your needs and priorities.

Disclaimer: Pictures used in this article were taken before the Covid-19 period.

This post was brought to you in collaboration with the Public Transport Council (PTC).