Is it because I Singaporean Chinese?

If you haven’t heard by now, a Singaporean man recently took to Twitter to express his frustration about his encounter with a Chinese tourist in an MRT station. 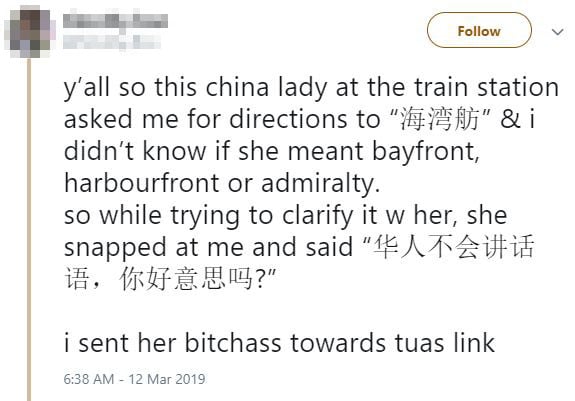 Here is how it went.

A netizen was asked by a Chinese tourist for the directions to Bayfront MRT station. He took some time to reply as he was trying to figure out which station she was referring to.

Sensing his confusion, the tourist remarked that it was a disgrace for a Chinese man to not be able to speak the language.

Frustrated, he decided to direct her to Tuas Link – aka 大士连路 (dà shì lián lù) – instead.

In order to help you be ‘Chinese’ enough, the MS News team has conducted ‘extensive research’ to help you find 10 Chinese names of cheem MRT stations. Singaporeans use English for MRT stations

To be honest, most Singaporeans have already converted to using English when referring to MRT stations. As our main conversational language, it is understandable that the netizen couldn’t understand which station it was.

However, though the tourist was rude, the netizen shouldn’t have directed her to Tuas Link. After all, shouldn’t we all try to be more gracious Singaporeans?

Which Chinese MRT station names are you familiar with? Let us know in the comments below.