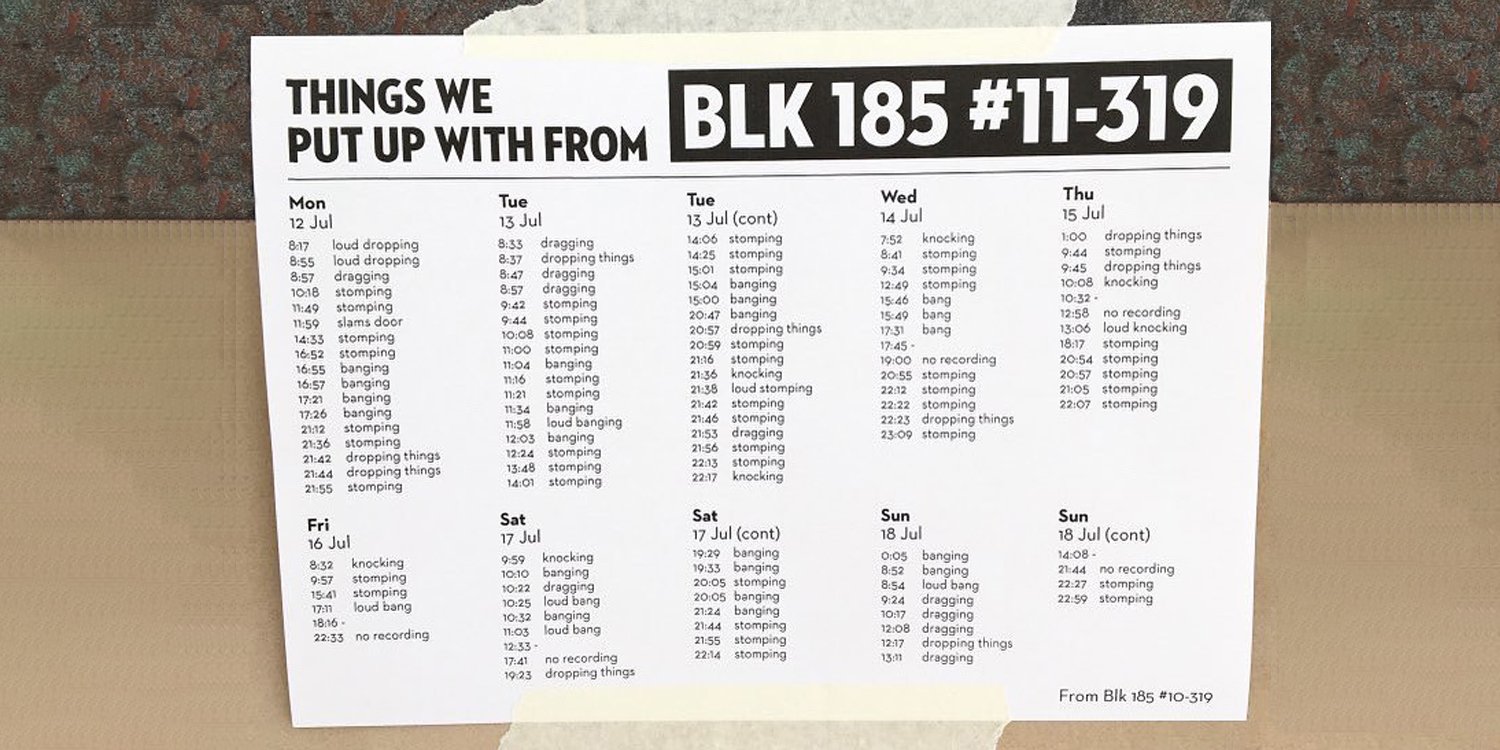 Resident Displays Timesheet Of Neighbour’s Noises Over A Week

Most of us live in HDB blocks where the close proximity to our neighbours can be a real blessing and even a chance to forge friendships. 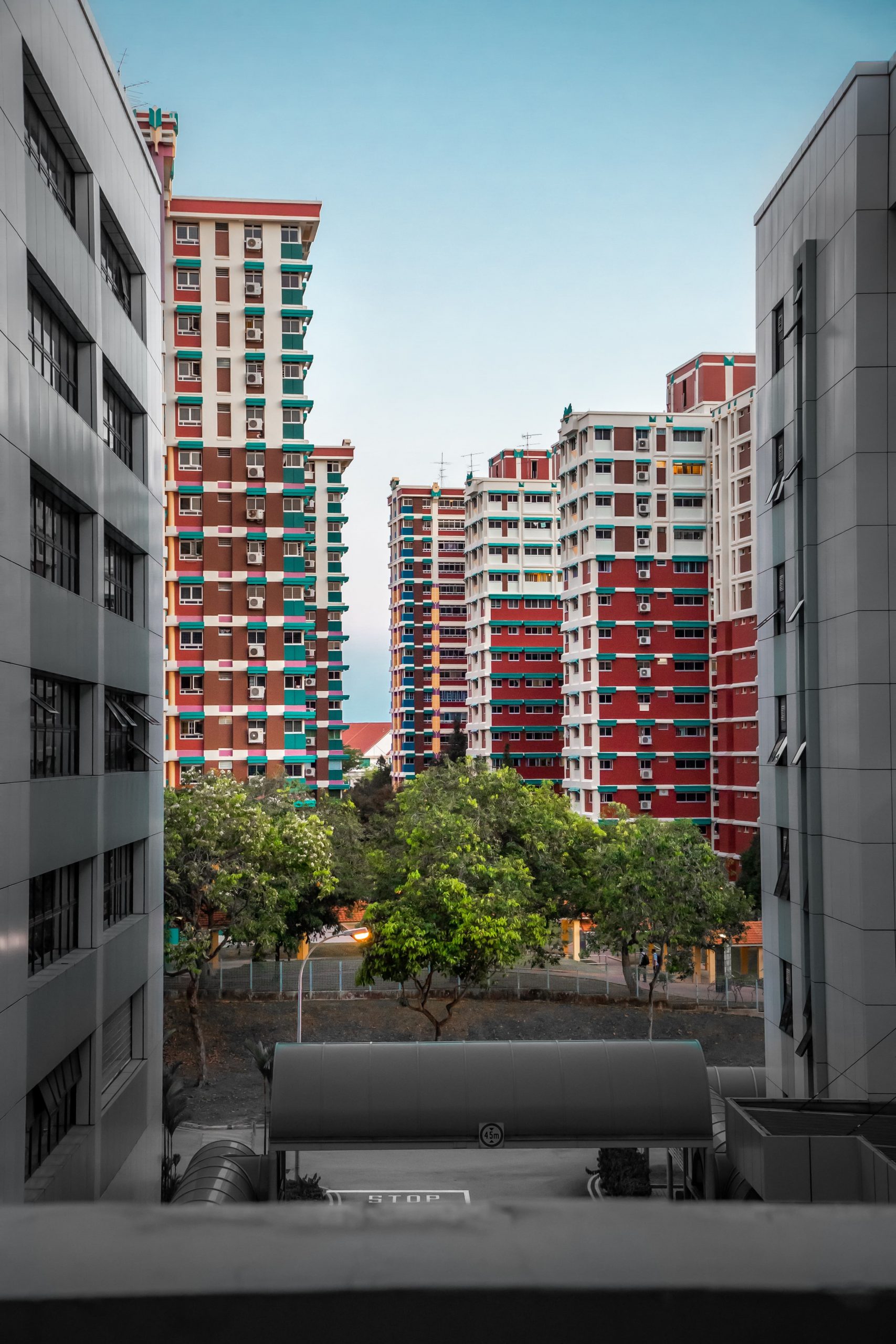 But more often than not, frustrations from daily life boils over– especially when every little shout, drop, stomp can be heard by your neighbour.

One particularly vexed resident decided to then keep a timesheet of all the noises they have to put up with from their neighbour.

Many netizens found the timesheet highly relatable and shared their own aggravating experiences with neighbours.

On Friday (30 Jul), publicnoticesg, an Instagram page that shares notices in Singapore’s public spaces, shared a notice titled “Things we put up with from Block 185 #11-319”.

Purpotedly made by a resident living below them, it details every sound made by the neighbour over the span of a week from 12 Jul to 18 Jul. 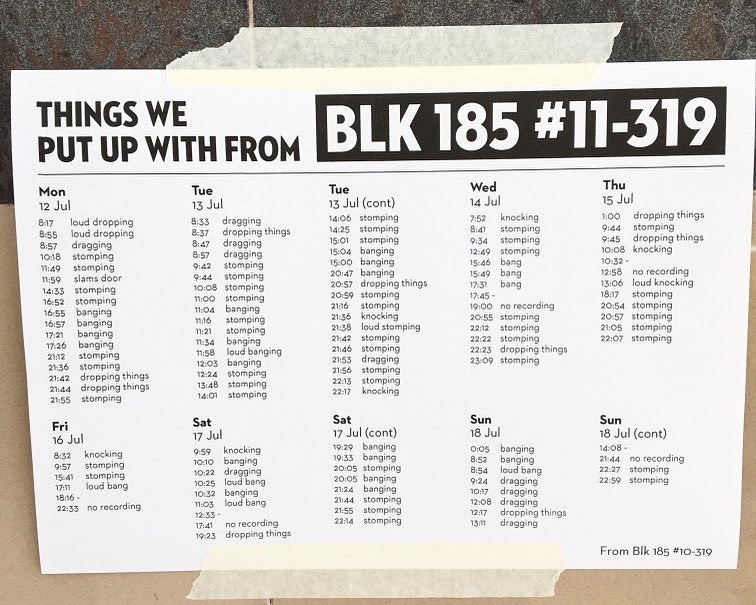 It even has meticulous timestamps of when each noise was made.

And it appears such stories of noisy neighbours are pretty common.

Some netizens shared their own gripes about their neighbours that make hammering and drilling noises late into the night.

Seeing the long list of noises each day, this netizen jokingly tried to make sense of it, saying the neighbour might have a home gym.

However, some did not find the notice humourous, saying the person should just communicate the problems to their neighbour instead of publicly shaming them.

When we live so closely to one another, small insignificant matters can grow into bigger frustrations over time.

While there is humour to be found in the resident’s extremely detailed timesheet, it might even fan the flames of further conflict.

So the next time you are unhappy with a neighbour, it might perhaps be helpful to try to have a conversation with them and try to resolve things amicably first.

And if not, perhaps further steps can be considered.

That said, we don’t know for how long this resident has been tolerating the noises. Hopefully there can be a solution reached though.