Must Share News – Independent News For Singaporeans
Home News Latest News NUS Molester Penned An Apology Letter For His Victim But Sent It... 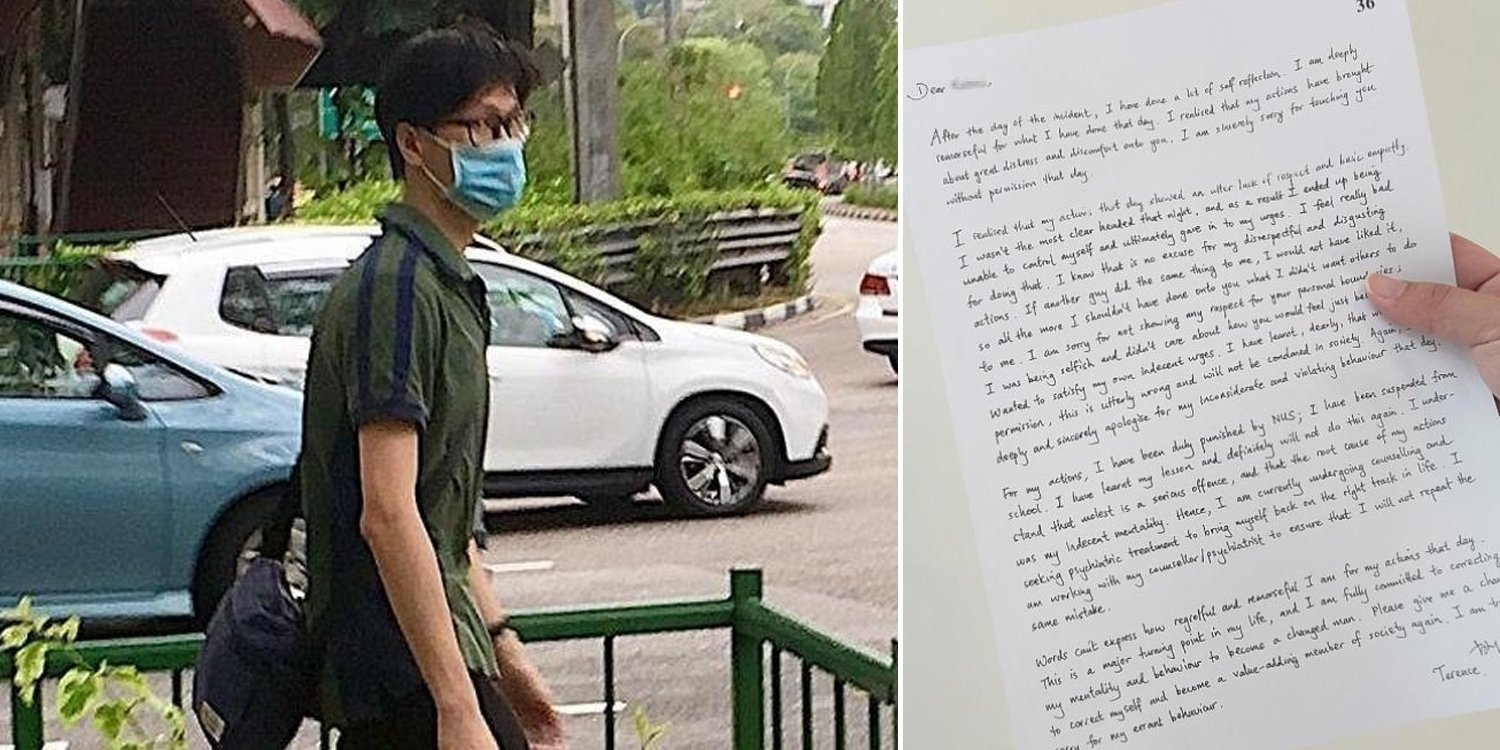 When you write someone a letter, you either hand it personally to the recipient or send it to them by mail. But the NUS student molester whose name and face are all over the Internet did things differently.

Apparently, he had written an apology letter for his victim, but instead of handing it to her directly, he sent it to newspaper outlet Shin Min Daily News.

The newspaper then had to forward the victim a photograph of the letter. 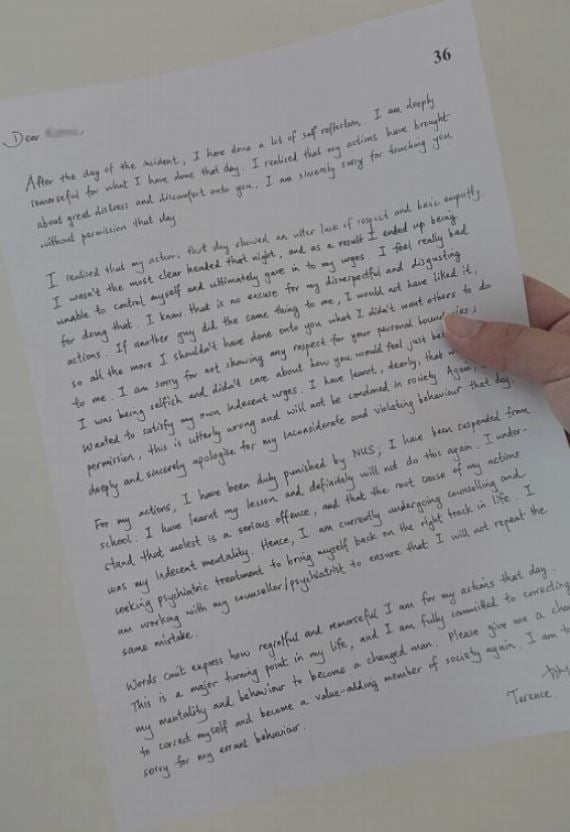 Here’s a transcript of what he wrote:

After the day of the incident, I have done a lot of self reflection. I am deeply remorseful for what I have done that day. I realised my actions have brought about great distress and discomfort onto you. I am sincerely sorry for touching you without permission that day.

I realised that my actions that day showed an utter lack of respect and basic empathy. I wasn’t the most clear headed that night, and as a result I ended up being unable to control myself and ultimately gave in to my urges. I feel really bad for doing that. I know that is no excuse for my disrespectful and disgusting actions. If another guy did the same thing to me, I would not have liked it, so all the more I shouldn’t have done onto you what I didn’t want others to do to me. I am sorry for not showing any respect for your personal boundaries; I was being selfish and didn’t care about how you would feel just because I wanted to satisfy my own indecent urges. I have learnt, dearly, that without permission, this is utterly wrong and will not be condoned in society. Again, I deeply and sincerely apologise for my inconsiderate and violating behaviour that day.

For my actions, I have been duly punished by NUS; I have been suspended from school. I have learnt my lesson and definitely will not do this again. I understand that molest is a serious offence, and that the root cause of my actions was my indecent mentality. Hence, I am currently undergoing counselling and seeking psychiatric treatment to bring myself back on the right track in life. I am working with my counsellor/psychiatrist to ensure that I will not repeat the same mistake.

Words can’t express how regretful and remorseful I am for my actions that day. This is a major turning point in my life, and I am fully committed to correcting my mentality and behaviour to become a changed man. Please give me a chance to correct myself and become a value-adding member of society again. I am truly sorry for my errant behaviour.

In summary, he apologised profusely for touching her inappropriately that day and also told her that he had been ‘duly punished’ by NUS. He is also apparently going through counselling to set himself right again.

Victim responds to the letter on FB

The victim, Ms Siew, was expectantly surprised to learn of the letter through the newspaper. She further questioned if it is acceptable for the apology letter to be released just as the appeal court is reviewing the case.

She didn’t specify why she thought it might be unacceptable. But if one were to guess, it may be that the apology letter could influence the appeal court in the perpetrator’s, Terence Siow, favour.

If you had read the contents of the letter and found some parts of it just slightly mechanical, you are not alone.

One netizen pointed out that if the letter was sent to the media instead of the recipient directly, then there is reason to suspect that it was meant for public rather than private eyes.

Ms Siew also wrote in the comments that she has not and does not intend to read the letter because she didn’t receive it herself.

Last Wednesday (25 Sep), the court ordered Mr Siow to perform 150 hours of community service. He will also be on probation for the next 21 months.

The case, however, remains open. According to a Facebook post by Mr Shanmugam, the Attorney-General’s Chambers (AGC) has filed an appeal on Friday (27 Sep).

As it stands, the letter appears to be doing more harm than good for Mr Siow. Which goes to show, if you’re writing an apology letter to someone, you’d best make sure that both the content and manner of delivery are genuine.