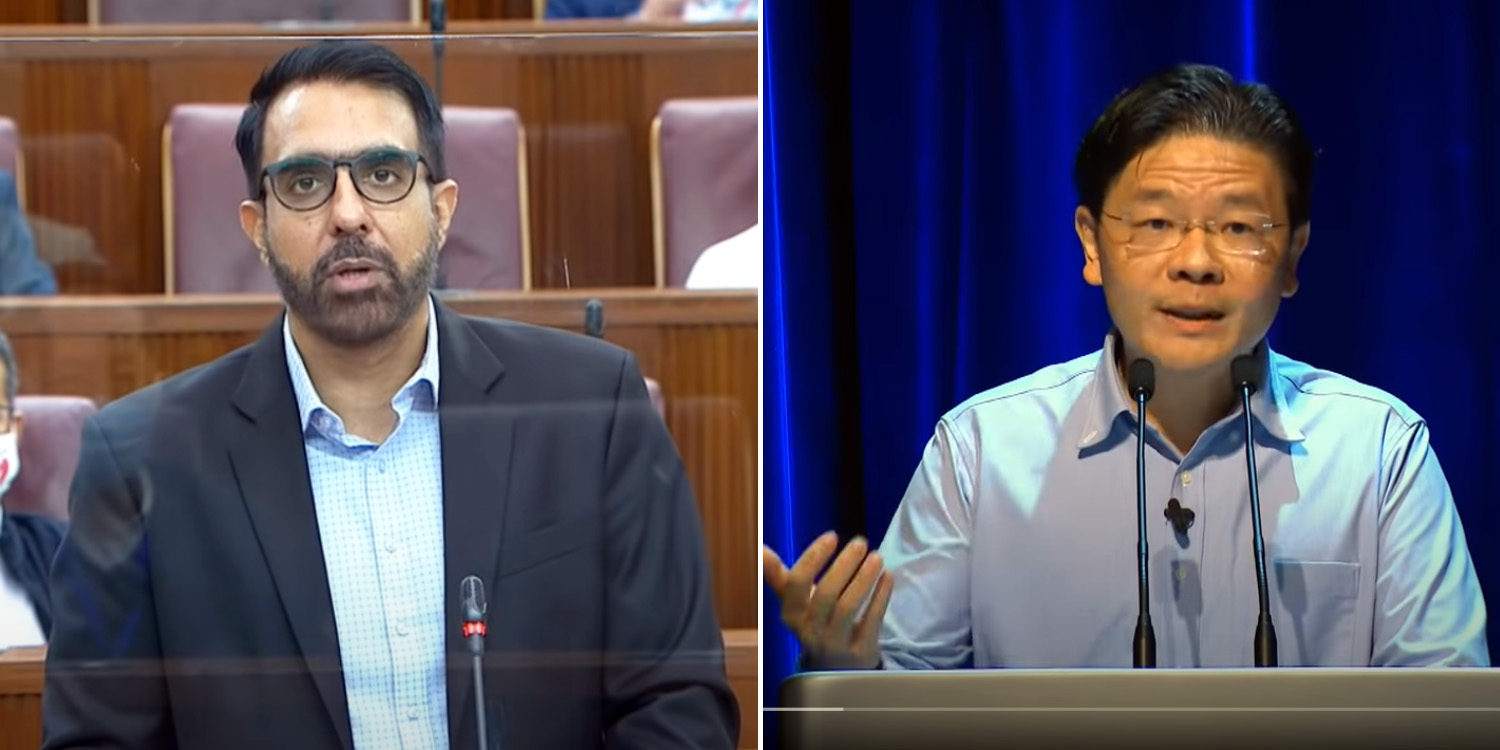 He also points out inequality issues caused by the EIP.

On Friday (25 Jun), Finance Minister Lawrence Wong spoke on racism at a forum by the Institute of Policy Studies (IPS) and S. Rajaratnam School of International Studies (RSIS).

Workers’ Party chief and Leader of the Opposition Pritam Singh made a response to his answers on Facebook the next day. 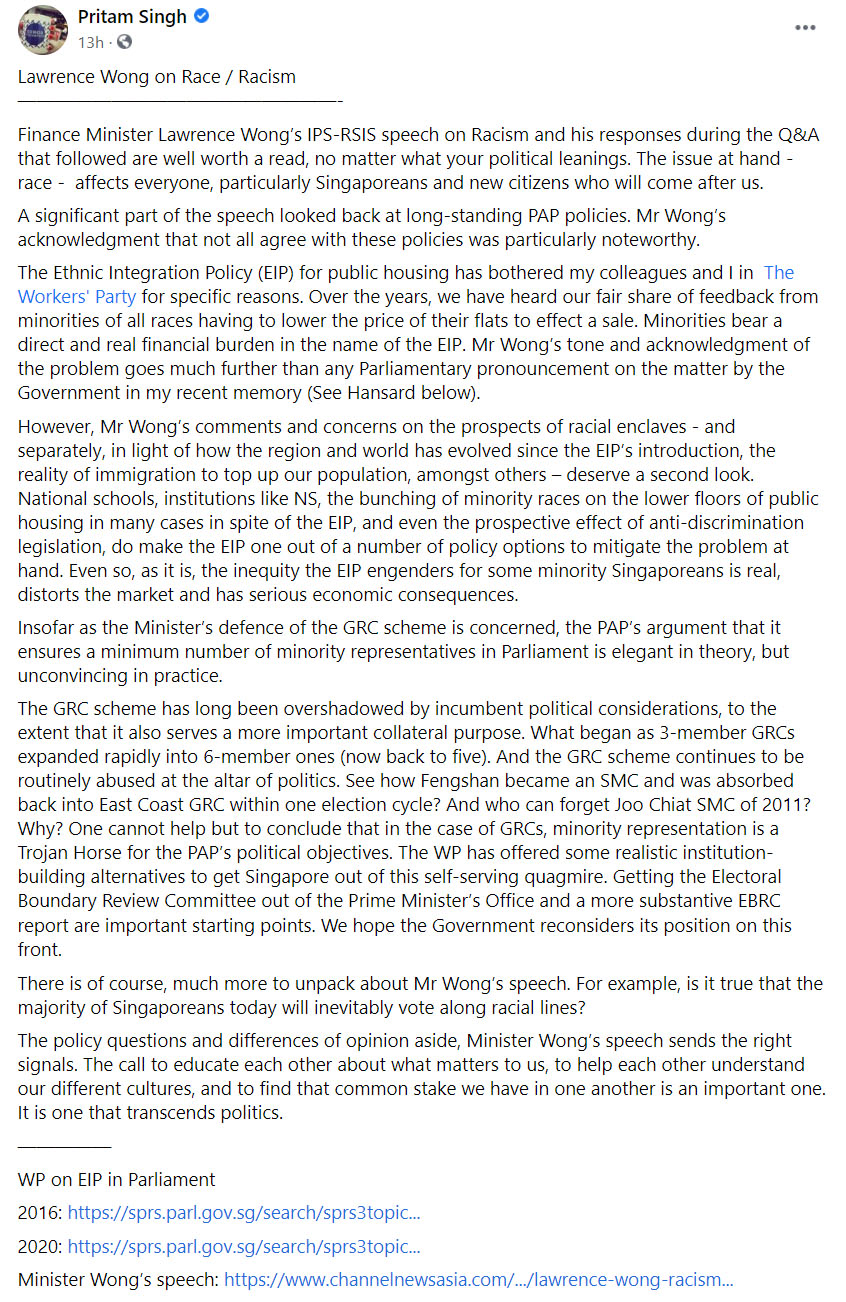 While Mr Singh says that the speech “sends the right signals”, he notes not everyone agrees with some longstanding policies in plac.

Mr Singh noted that Mr Wong’s speech is worth a read regardless of political leanings as they affect everyone regardless of race.

You can check it out here before reading it further.

Firstly, due to the EIP, Mr Singh has heard feedback from minorities that they need to lower their flat prices in order to sell them.

This creates a financial burden that’s a result of the policy, he said, and “has serious economic consequences”.

GRC is “unconvincing in practice”

In the speech, Mr Wong argued that the GRC system ensures a minimum number of minority representatives in Parliament, but Mr Singh calls it “unconvincing in practice”.

Mr Wong had noted that some have believed the GRC to not be necessary, but said that “nobody would be more pleased” than him and the PAP if the GRC isn’t necessary anymore. 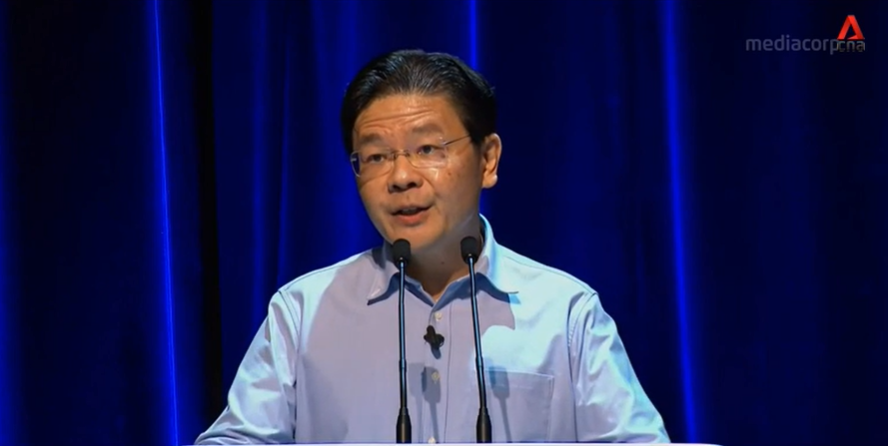 This is to say that the PAP still believes it’s required for minority representation given we’ve not reached a “post-racial” state.

Mr Singh cites the change from 3 to 6-member GRCs, before it switched back to 5, as one example of how the system is “overshadowed by incumbent political considerations”.

At least 2 examples of GRCs becoming SMCs then back again within 1 election cycle were also mentioned, both of which affected the WP during elections.

Fengshan becoming an SMC then going back to East Coast GRC was a thing, as was Joo Chiat SMC, which became absorbed into Marine Parade GRC in 2015.

In light of these, Mr Singh calls minority representation a “Trojan Horse” for the PAP’s apparent objectives.

He’s suggested ways for the GRC system to not solely serve a single party’s ends, such as removing the Electoral Boundary Review Committee from the Prime Minister’s Office, and hopes the Government can consider them.

In concluding, Mr Singh said that the speech does send the right signal overall, though he wonders if the majority of Singaporeans do indeed vote along racial lines as Mr Wong noted.

He applauds the call to educate each other about what matters and understand our different cultures, as important and one that transcends politics.

Mr Wong had noted the need for majority Chinese to be sensitive to minorities’ needs.

But the majority also have their needs and concerns.

Regardless, there are policies that Mr Singh believes can be relooked and upgraded. This is something Mr Wong says will be done as time passes as well.

We hope that our multiculturalism can be refined with the times as well, with more understanding of each other and more inclusivity.