SBS Bus Rider Slams Driver For Slow Journey; Netizen Explains Why He Must Stick To A Schedule We can afford to be nicer to our service providers.

Whether you take public transport or a car to work, the morning rush hour is something that everyone is familiar with.

Squeezing with other people is already extremely uncomfortable, but it can be made worse when the bus you’re in decides to travel at a “snail’s pace”.

A man took to Facebook on Friday (12 Apr) to complain about his bus driver’s speed during his morning commute to work. Unfortunately, not all netizens agreed with his side of the story, shedding light on the driver’s perspective instead.

Here’s the post in full, we also break it down for you after the jump.

The man boarded a Bus Service 25 at 8.45am last Thursday (4 Apr) from Ubi towards Ang Mo Kio for work.

He claimed that during his commute, the bus was travelling at just 10-15km/hr, even though the roads were clear.

Additionally, the bus allegedly stopped at bus stops for around 5 mins even though there was no one boarding and alighting.

Becoming increasingly late for his work appointments, he allegedly approached the driver and asked him to drive faster.

He also claimed that another passenger seated behind him complained about the speed of the bus in Hokkien. 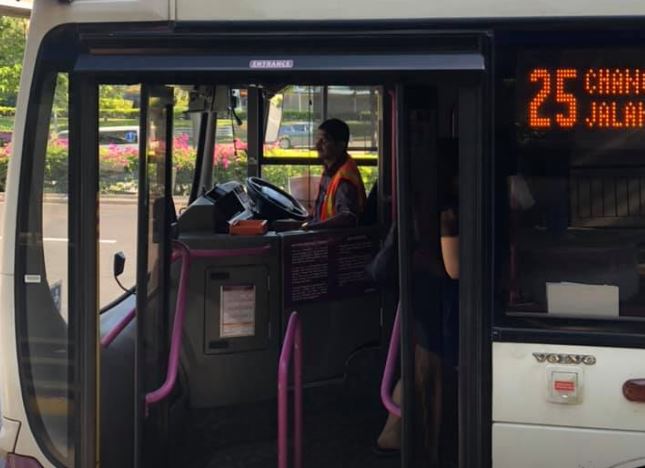 When confronted, the netizen claims the bus driver repeatedly said to him,

Eventually, the frustrated man threatened to file a complaint. The bus driver’s alleged reply was for the man to “go ahead and complain”.

The man goes on to blame the bus driver for his “incompetence”.

He feels that bus drivers should not prioritise the schedules provided by SBS over his passenger’s needs.

The writer ends his post by suggesting that bus drivers should raise the problem of meeting their schedules to SBS management.

One netizen was frustrated that some buses tend to slow down a few hundred metres from traffic lights.

Another netizen agreed with the man, but suggested alternatives like taking the train.

Bus drivers must stick to the schedule

On the other hand, many netizens defended the actions of this particular bus driver.

This Facebook user felt that the netizen should have brought up the issue with the LTA instead of the operators or actual bus drivers.

Finally, a netizen who claims he has had experience being a Bus Captain with SBS breaks down why following the schedule is important. 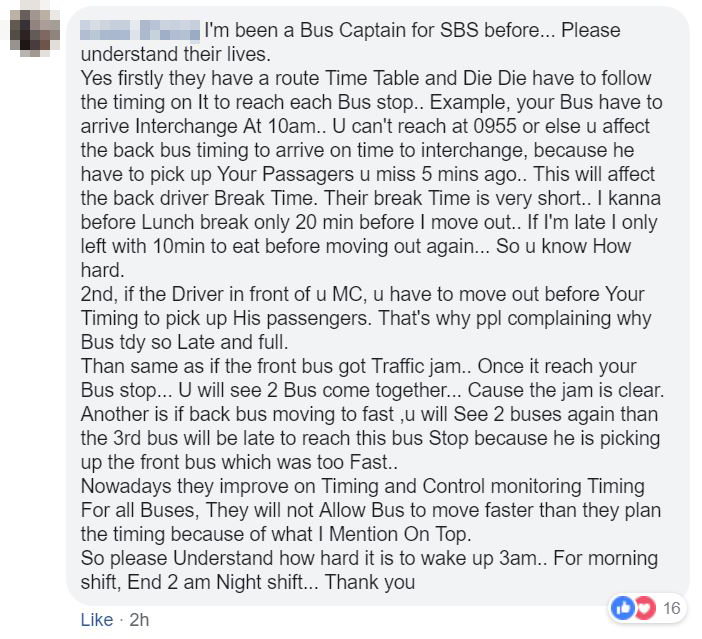 Here’s a more succinct version of his explanation:

Look for alternatives if possible

The bus schedule is aimed to ensure that waiting times aren’t too long for riders. However, just like every system, there are lapses that may sometimes occur.

If you’ve always been affected by potentially erratic timings, commuters are encouraged to look for alternatives.

Trying combinations of public transport like taking the MRT or opting for ride-hailing services like Grab could be a viable option for those in a rush.

Either way, we should try to put ourselves in each other’s shoes the next time we find ourselves in such situations.

We can simply start by being a little nicer to our service providers.