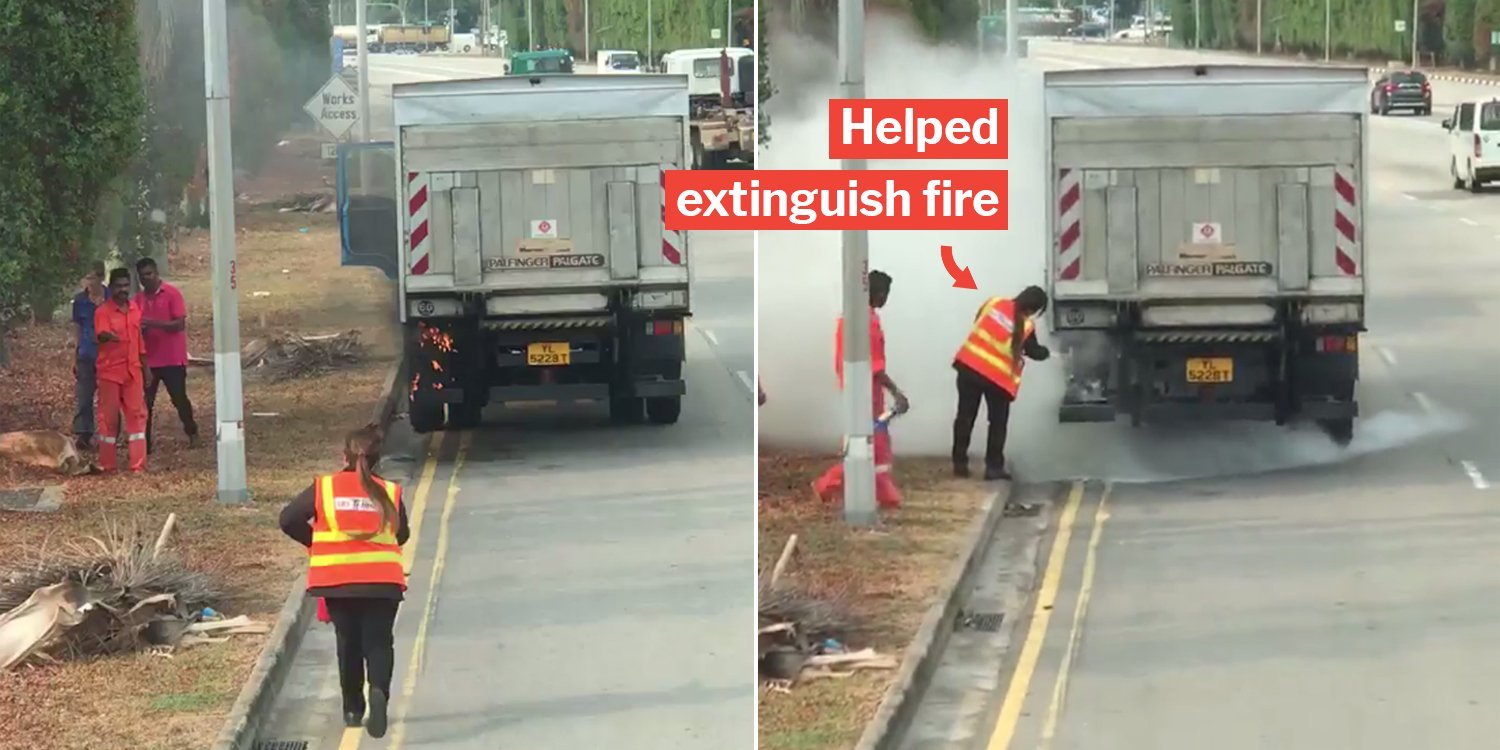 Bus captains don’t just help commuters get between places, they can also be kind Samaritans too, as you’ll soon see.

On Friday (28 Sep), a netizen named Pasumpon Durai uploaded a clip showing an SBS Transit driver alighting from a double-decker bus she was driving to help extinguish a fire on a truck. 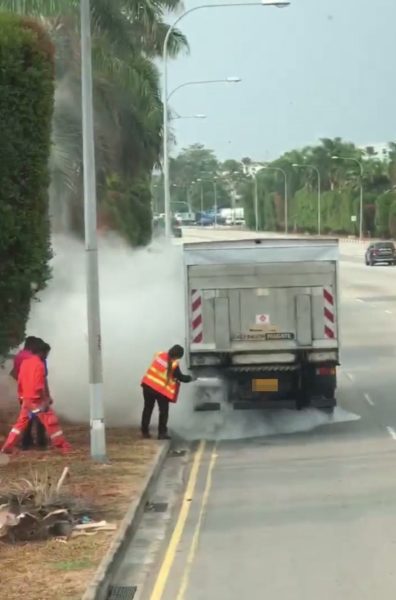 According to the video description, the incident allegedly happened in Tuas.

You can watch the video in full here, we also break it down for you after the jump.

Fire was extinguished within seconds

At the start of the video, a female SBS Transit bus captain wearing a safety bib can be seen rushing towards a stationary lorry with a fire extinguisher in hand. 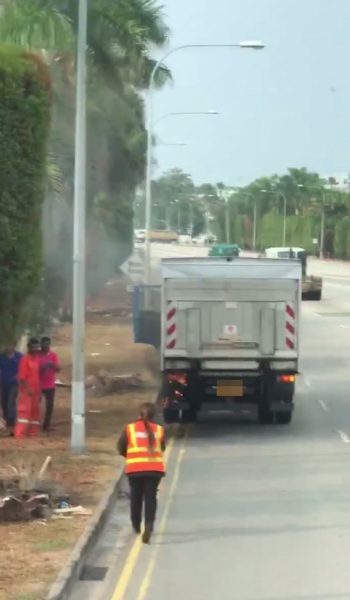 Several concerned men were standing on the pavement adjacent to the vehicle, looking stunned and seemingly clueless about what to do.

The truck’s left rear section appears to be in flames, and small specks of sparks can be seen flying in the air. 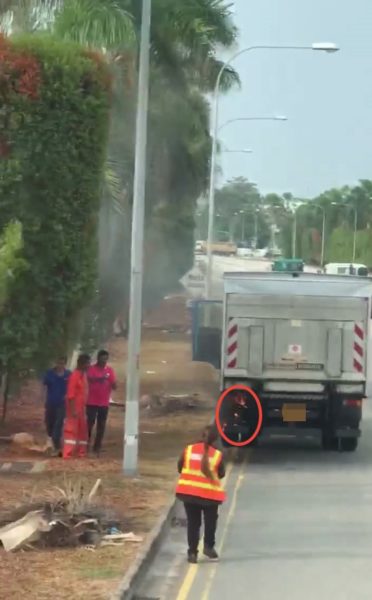 The bus driver calmly sets the bulky fire extinguisher on the ground for a while before dousing the flame with a generous amount of white vapour. 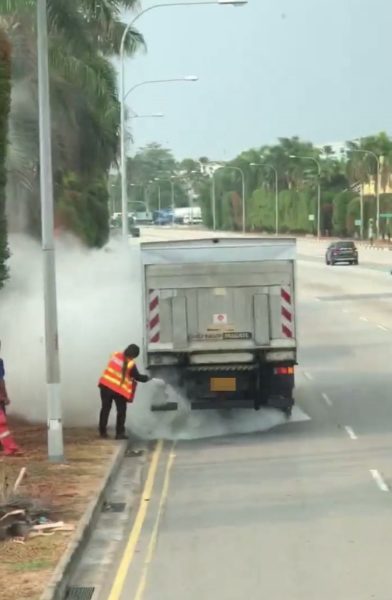 The tiny blaze was successfully put out within just a few seconds, and the bus driver returned to the bus she was driving. 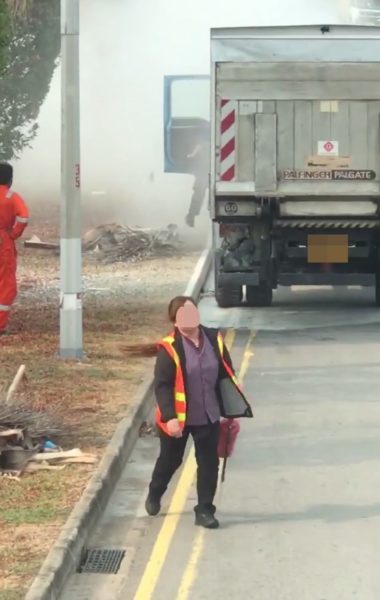 Responding to MS News‘ queries, an SBS Transit spokesperson said Ms Thian Siew Mui – the bus captain in question – was driving bus service 247 and had dropped off passengers opposite West Star when she witnessed the fire. 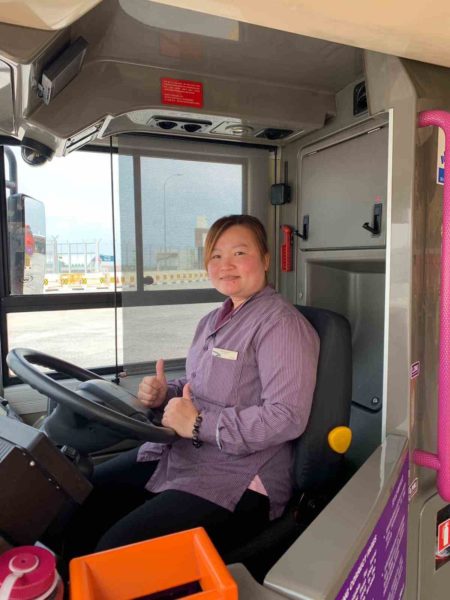 The blaze was purportedly quite large and was “almost the size of a rubbish bin”.

Another lorry driver also noticed the fire and stopped his vehicle to help extinguish the fire. The lorry drivers apparently attempted to put out the fire using 3 bottles of mineral water, but to no avail.

Upon seeing this, the 38-year-old bus captain rushed to put out the flames using a fire extinguisher.

Coming face to face with such a huge fire can be intimidating, but Ms Thian claimed that she was unfazed by it as she had learnt how to extinguish a fire at the SBS Transit training school.

This was what Ms Thian had to say, when asked to summarise the incident:

I just wanted to quickly help the lorry driver who looked helpless and at the same time, ensure that my passengers could continue with their journeys quickly.

I’m really doing what anyone would have done in the situation and I’m glad that my training came to good use.

Ms Thian was lauded by the netizen who uploaded the clip – who is likely a bus passenger – for her kind deed. He added that the female driver later apologised to the passengers for the 5-minute delay.

Other netizens were full of praise too

The video has since gone viral, with over 1.6k shares and 181 comments.

Most netizens who left comments on the video praised Ms Thian for her actions. Some even thought she deserved an award for what she did.

Others questioned why the truck wasn’t equipped with a fire extinguisher in the first place.

Finally, this netizen expressed how he was especially fond of how the bus captain looked back at the lorry one last time before heading back to her lorry — perhaps a sign of a responsible person.

Kudos to the SBS bus captain for her selfless actions

Kudos to Ms Thian for going out of her way to assist fellow motorists in need of help.

We hope she will be recognised for her selfless effort and will inspire others on the road to do the same.