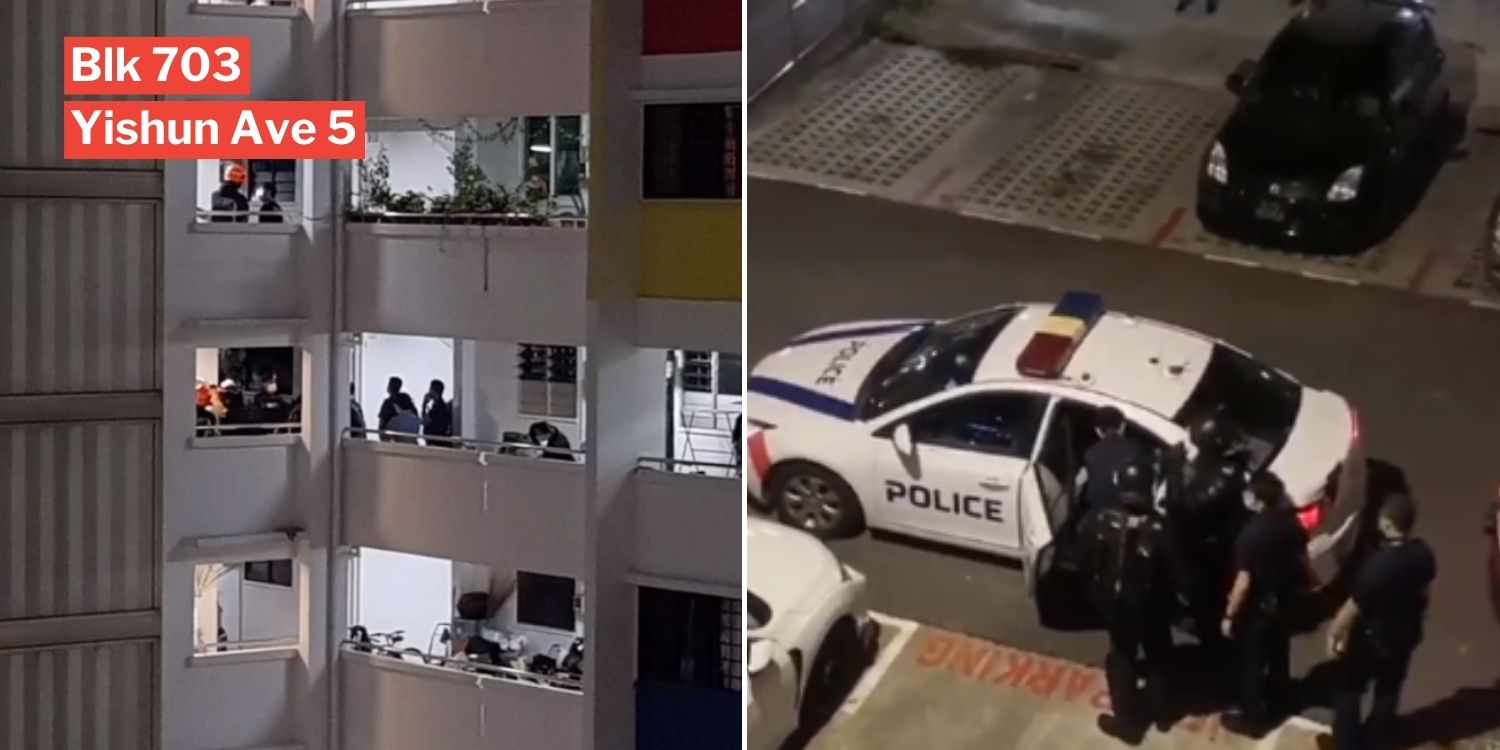 Update (21 Oct, 1.25am): SPF has released a statement, confirming the arrest of a 45-year-old man under Section 7 of the Mental Health (Care and Treatment) Act and Rash Act Causing Hurt. You may read it in full below.

With a cordon in place and airbags deployed, the seemingly tense situation had viewers on edge, until the video was cut short abruptly.

Netizens who managed to capture the incident showed it ending shortly after, thankfully without anyone getting hurt.

A resident who witnessed the commotion on Tuesday (20 Oct) decided to stream it ‘live’ on Facebook, garnering thousands of viewers.

According to the Facebook user, the standoff occurred at Block 703, Yishun Ave 5.

Another Instagram user who lives in the block where the incident occurred also managed to document everything in her IG stories, giving a brief rundown of what happened.

According to her, she first heard the sound of glass bottles thrown out a window of her block at around 6pm. Concerned, she called the block’s Town Council, which then alerted the police. Shortly after 7pm, police reportedly arrived and cordoned off the area. 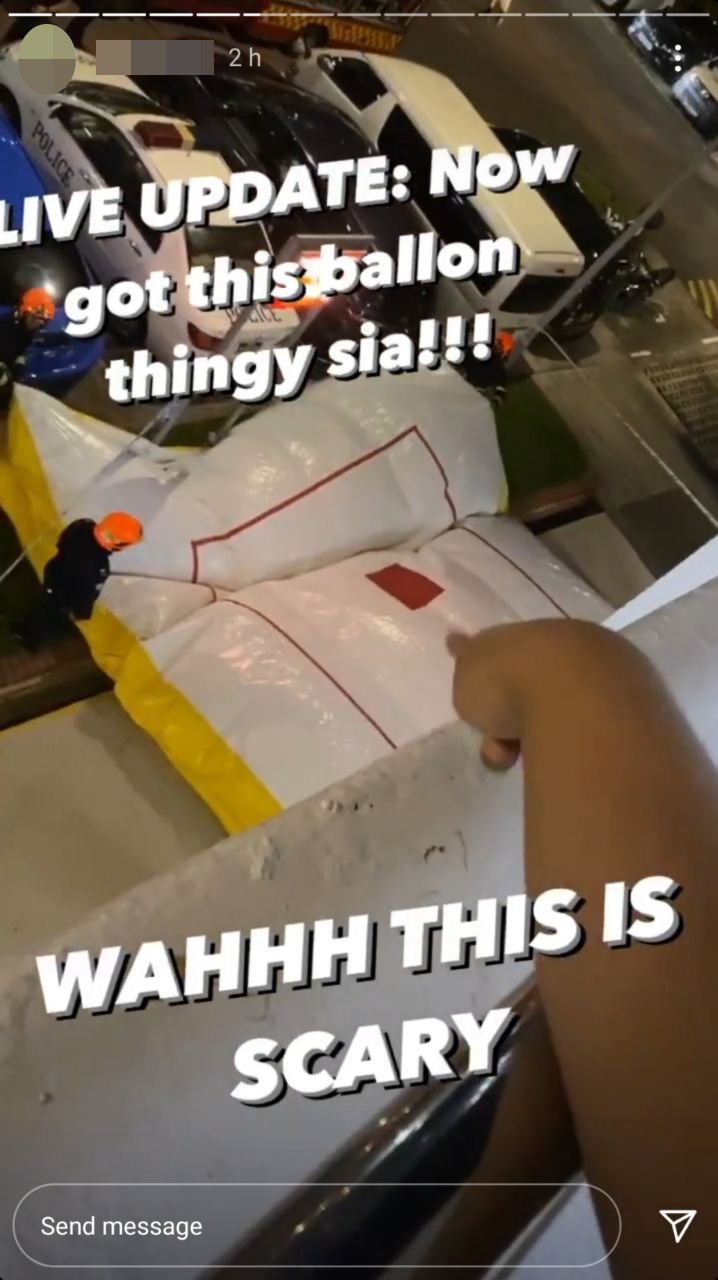 In another story, she observed at least 5 different SCDF vehicles on site, along with several SCDF and SPF personnel.

At least 1 vehicle was from SCDF’s Disaster Assistance and Rescue Team (DART). SPF’s Police Tactical Unit (PTU) troopers also appeared to be waiting outside a unit on the 6th floor, though there seemed to be some confusion as to which unit they were attending to.

As you can see in the picture, there were SCDF personnel waiting in the flats above and below. Police take man away in handcuffs

Personnel thankfully didn’t have to use the airbags, as rescuers from SCDF’s DART abseiled down the exterior of the block and entered the unit in question from the outside. 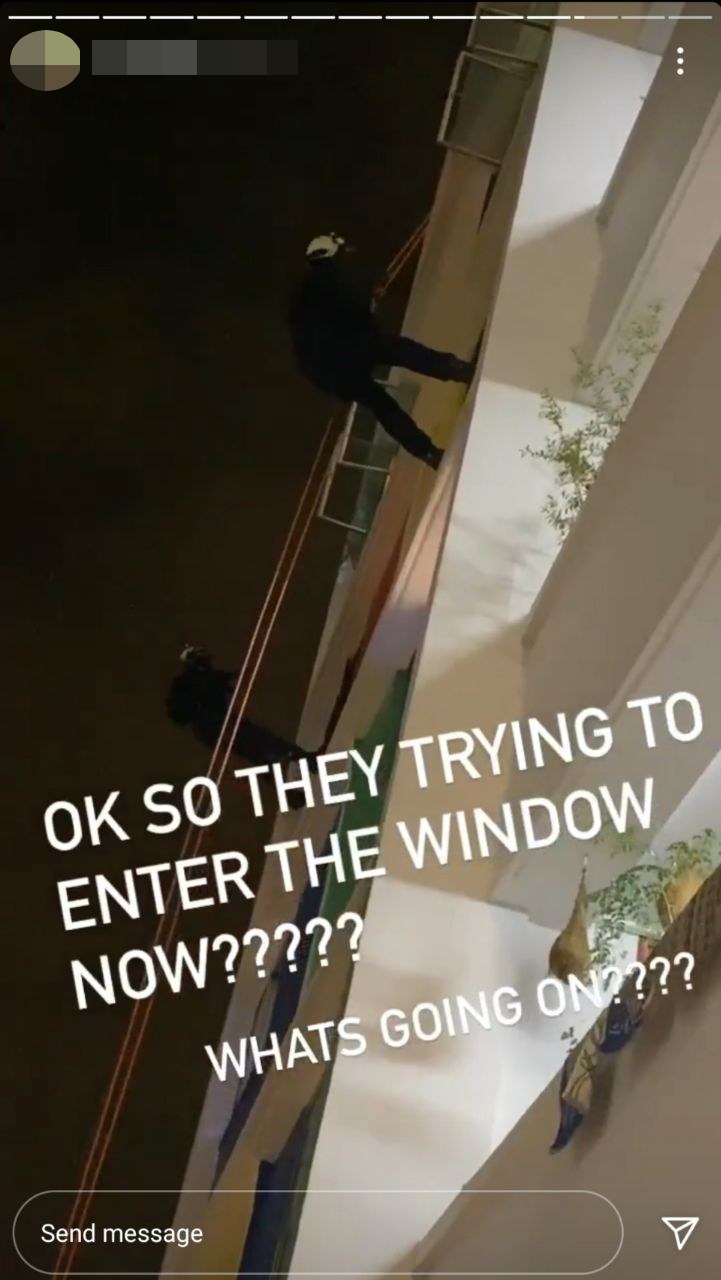 Subsequently, several police officers were seen escorting a man in handcuffs into a police car. Instagram page @sgfollowsall quoted a similar account from a neighbour — apparently, rescuers had broken the unit’s window to get to the man. 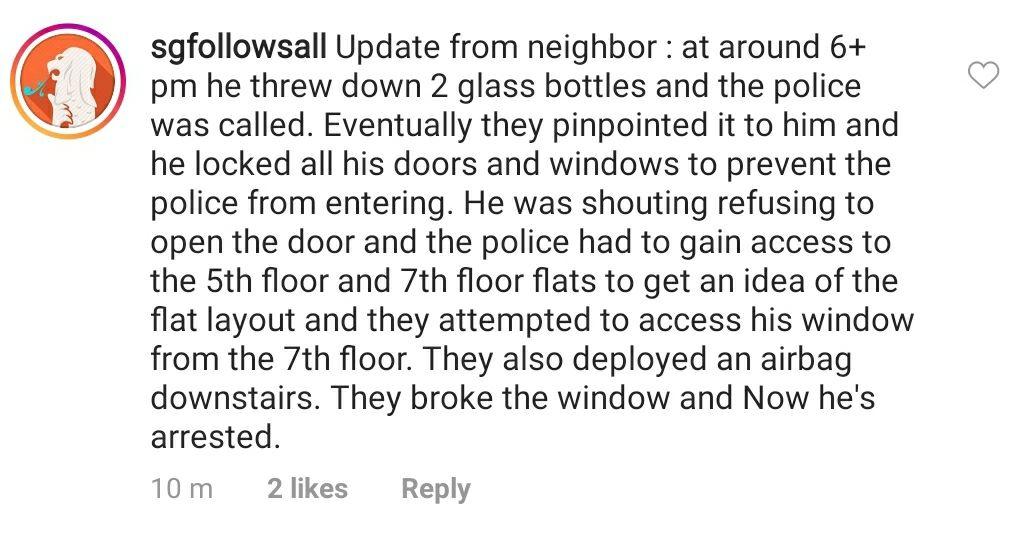 In response to queries from MS News, SPF said that they were alerted to a case of suspected rash act. Here’s their statement in full:

On 20 October 2020 at 5.59pm, the Police were alerted to a case of suspected rash act at Blk 703 Yishun Avenue 5, where a man was allegedly throwing glass bottles from a unit of the said block. A 32-year-old woman, unknown to the man, sustained a cut on her leg from one of the thrown bottles and was attended to by a paramedic at the scene.

The Police established the residential unit of the man and attempted to engage him. The man locked himself in the unit and refused to heed officers’ repeated calls to open the door. He also threatened to hurt himself.

In order to ensure the safety of the man, officers from the Special Operations Command effected forced entry into the unit and apprehended the man. The 45-year-old man was apprehended under Section 7 of the Mental Health (Care and Treatment) Act and Rash Act Causing Hurt. Police investigations are ongoing.

SCDF also confirmed that they received a call for assistance. Here’s their statement in full:

SCDF deployed 3 safety life air packs and Rescuers from the Disaster Assistance and Rescue Team (DART) were on standby as a precautionary measure.

There were no reported injuries.

Look out for each other

Whether the man was facing any issues that led to his actions is unclear for now, and we’d advise readers to refrain from jumping to conclusions.

Kudos, however, go to the concerned neighbour who alerted the Town Council and subsequently got the SCDF and police’s help promptly.

These are tough times we live in now, and we don’t know what struggles the people around us may be facing.

Let’s look out for each other and make sure we’re all doing fine.