Not The First Time Students Have Been Disciplined Over Inappropriate Games

Stripping in the sea and doing sexually suggestive lap dances are not activities that students normally participate in.

But some National University of Singapore (NUS) and Ngee Ann Polytechnic (NP) students didn’t quite get the memo.

On 4 June, students at NUS allegedly stripped at Siloso Beach on Sentosa as part of a post-orientation camp game.

Meanwhile, a female student from NP performed a lap dance for a flustered-looking male student.

Staff of both schools have blasted the activities and promised concerned parents that disciplinary action was being considered.

At a post-orientation camp, about 40 NUS students from the University’s Kent Ridge Hall played a weird game.

No, it wasn’t Captain’s ball or beach volleyball.

Instead, teams had to lay out a line of clothes on the beach and the team with the longest line won.

But to get clothes in the line, students had to take off their own.

A female freshman said that not everyone was into the idea of the game, but felt pressured to remove their clothes in order for their team to win.

At the start, some didn’t seem comfortable to take off their clothes, especially the girls…but because it’s a game, people started getting competitive, and when your team is losing, you’ll feel a bit of peer pressure to help the team win.

She added that she herself found the game dubious.

The whole concept of the game didn’t make sense to me.

But that didn’t stop them from retrieving the clothes from their own bodies.

By the end of the game, half of the male students were 100% naked.

Some female students had also taken off their shirts, and at least one of them was reportedly topless.

But the game had to be stopped because some students apparently began behaving inappropriately.

Note that the game was part of a private event organised by students. It was not part of their orientation camp, which ended the day before.

And the students might have unknowingly broken the law. After all, it’s illegal to strip in a public place in Singapore.

The police could act if someone lodges a complaint.

Students speak out against coverage

But some students aren’t happy over the media’s coverage of the incident.

An Instagram user brushed off reports of the incident as “fake news”. 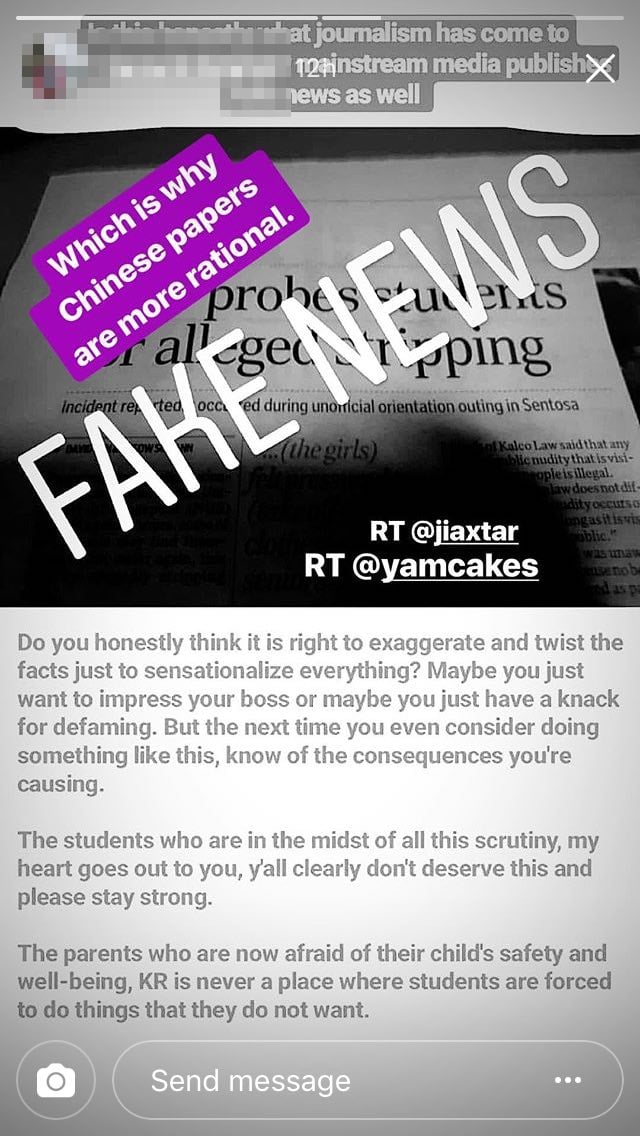 In it, the student, likely a student of Kent Ridge Hall, slammed the media for its “sensationalised” coverage of the incident.

He then adopts a more menacing tone in his next line,

But the next time you even consider doing something like this, know of the consequences you’re causing.

Looks like we’ve got a budding Mr Trump who shoots the messenger.

But it wasn’t just at Asia’s top university that students acted in a lewd manner.

A video of a volleyball camp shows a female student giving her male counterpart a suggestive lap dance, with students cheering her on and taking videos. 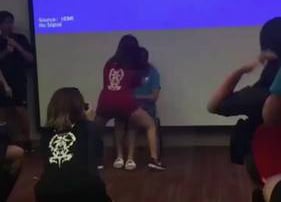 The school doesn’t approved of the activity either, saying it was an impromptu activity initiated by some students.

We wonder where the organisers of the camp were, given that they had been “briefed beforehand…to ensure that the activities they conduct are respectful and appropriate”.

Students will be counselled, they say.

Not the first foolhardy game

It’s not the first time students in Singapore have been disciplined over “games”.

In 2016, 30 NUS seniors were punished for sexualised orientation games at the university.

Students reported that they were made to participate in demeaning activities, which ranged from revealing whose bodily fluids they would like to drink to re-enacting an incestuous rape scene.

Camp cheers were also sexualised, with inappropriate references to the male anatomy. They were a “tradition…passed down from previous batches”.

What’s next? We can only wonder.