SIA Cabin Crew Loses Job Due To Covid-19, But Has No Regrets After Fulfilling Lifelong Dream She had a dream and stuck to it.

Malaysian Finally Becomes SQ Girl In Aug 2019 After Many Tries, But Is Let Go Due To Covid-19

Most people have dreams of what they want to do with their lives, be it being a doctor who saves lives, skilled footballer or enchanting singer.

One girl dreamt of being a cabin crew, and finally landed her dream job at Singapore Airlines (SIA) after trying, failing and trying again. It seemed that she was about to lead a fantasy life — but after just a few months of flying, Covid-19 struck.

She was let go, as airlines all over the world were badly hit by travel restrictions.

However, she has no regrets, as she had fought for her dream and it came true.

Ms Melisa Yon told her tale of a dream achieved and gone in a lengthy Facebook post on Thursday (17 Dec).

In it, she described how she came to dream of being a cabin crew at just 16 years old.

A year earlier, when she was 15, she started thinking about what she wanted to do with her life, and realised a few things about herself:

Thus, from 16, she wanted to become a cabin crew. 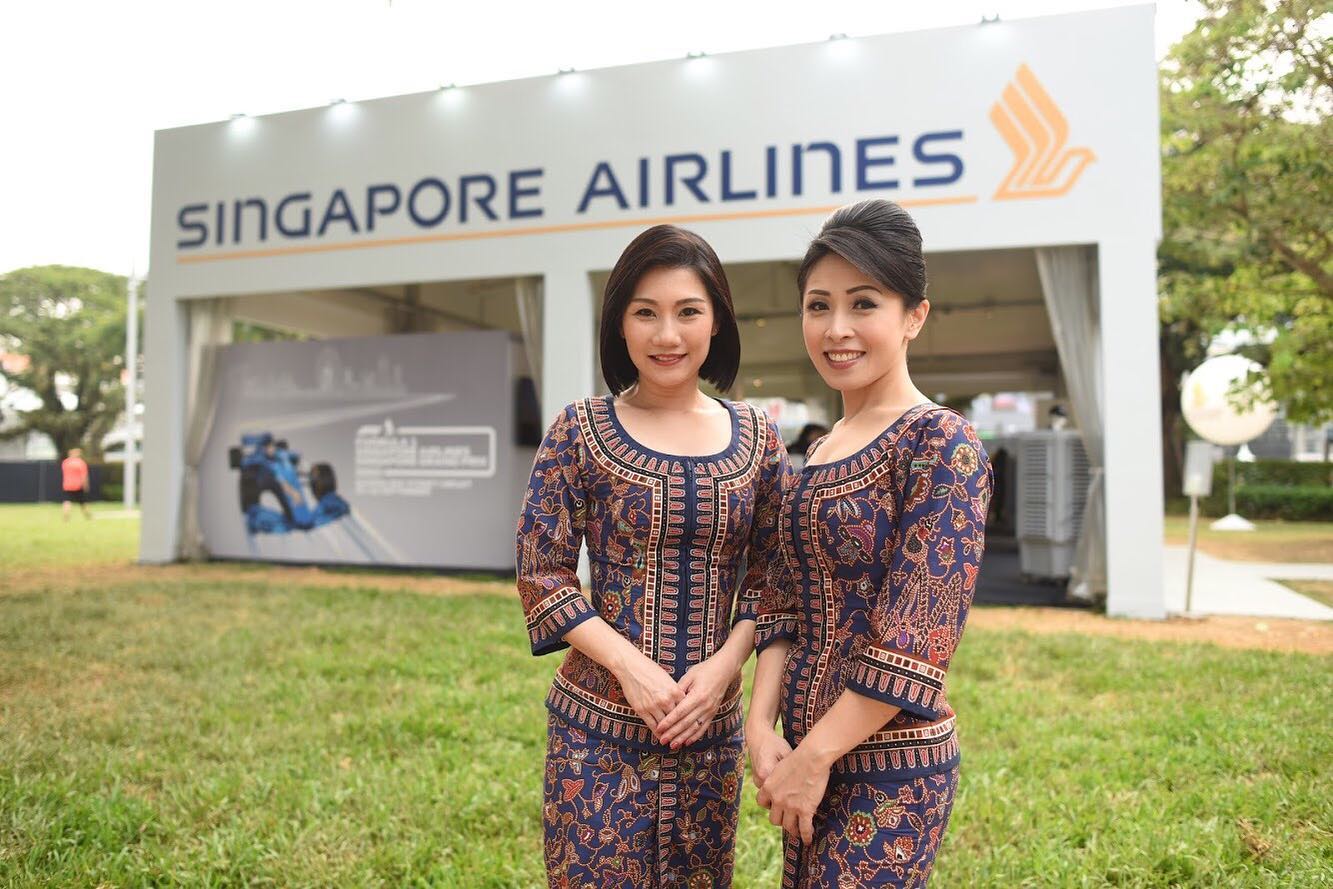 Facing up to her shortcomings

However, Ms Yon also had to face some of her shortcomings.

She said there were others who were better than her; she wasn’t taller than them and her skin wasn’t whiter than theirs.

She wasn’t as good in her studies as others either.

Added to that was a lack of support from her father.

However, she said when a dream exists, motivation will come.

Getting the ball rolling

When Ms Yon graduated from secondary school with grades that were “just good enough”, the Malaysian started to find her own way in life.

After a year of “bumping around”, she still felt the pull of being a cabin crew.

What she meant was that as the interviews for cabin crew were all conducted in English, which she wasn’t too good in, she searched online for interview questions.

Then she practised answering them in front of a mirror — just like a crazy person, she said.

She failed her 1st interview

Soon, she found out that AirAsia was recruiting, and nervously applied. On the day of the interview, she woke up at 5am to get ready.

However, despite showing her “best side”, she failed the interview, and cried for many days.

Although she felt that all her efforts were in vain, she still applied for other interviews, and faced more and more rejections.

Discouraging words were said to her

Matters were made worse when people said discouraging words to her.

Some asked, “You really think you get in?”

“Don’t be delusional,” others said.

Most insultingly, some were of the opinion that those who want to be cabin crew usually don’t do well in their studies, or think they’re very pretty.

Hearing these depressing things made her feel terrible, and by now, most people would have given up on their dream.

She was also close to giving up.

She was finally admitted by SIA in 2018

However, in 2018, at the age of 18, Ms Yon decided to give SIA a shot, as they were recruiting in Malaysia.

Having practised conversing as usual, she went for the interview.

To her own surprise, she passed, and was admitted! She could hardly believe it herself, and even asked herself how she managed to do it!

Eventually, she decided to give it her all, since she finally snagged a long-awaited chance.

So when the time came to embark on her journey with SIA, she told herself that since she’s always wanted to depend on herself, she should follow through on her chosen path even if she has to do it on her knees.

While initially she felt free and excited, she realised that the training was more like a “nightmare”.

That’s because she had a lot of theory to read up on, and she admitted that she wasn’t too good at studying.

When it came to the English exam, she stayed up all night practising as she was afraid she’d forget everything.

Basically, in those days, she woke up at 6am and slept in the wee hours of the morning, she said.

She failed 3 exams, had to start all over again

Eventually, despite all her hard work, Ms Yon failed 3 exams, and had to “rebatch”.

That means she had to start the course all over again with a new batch, wasting 1.5 months of work. 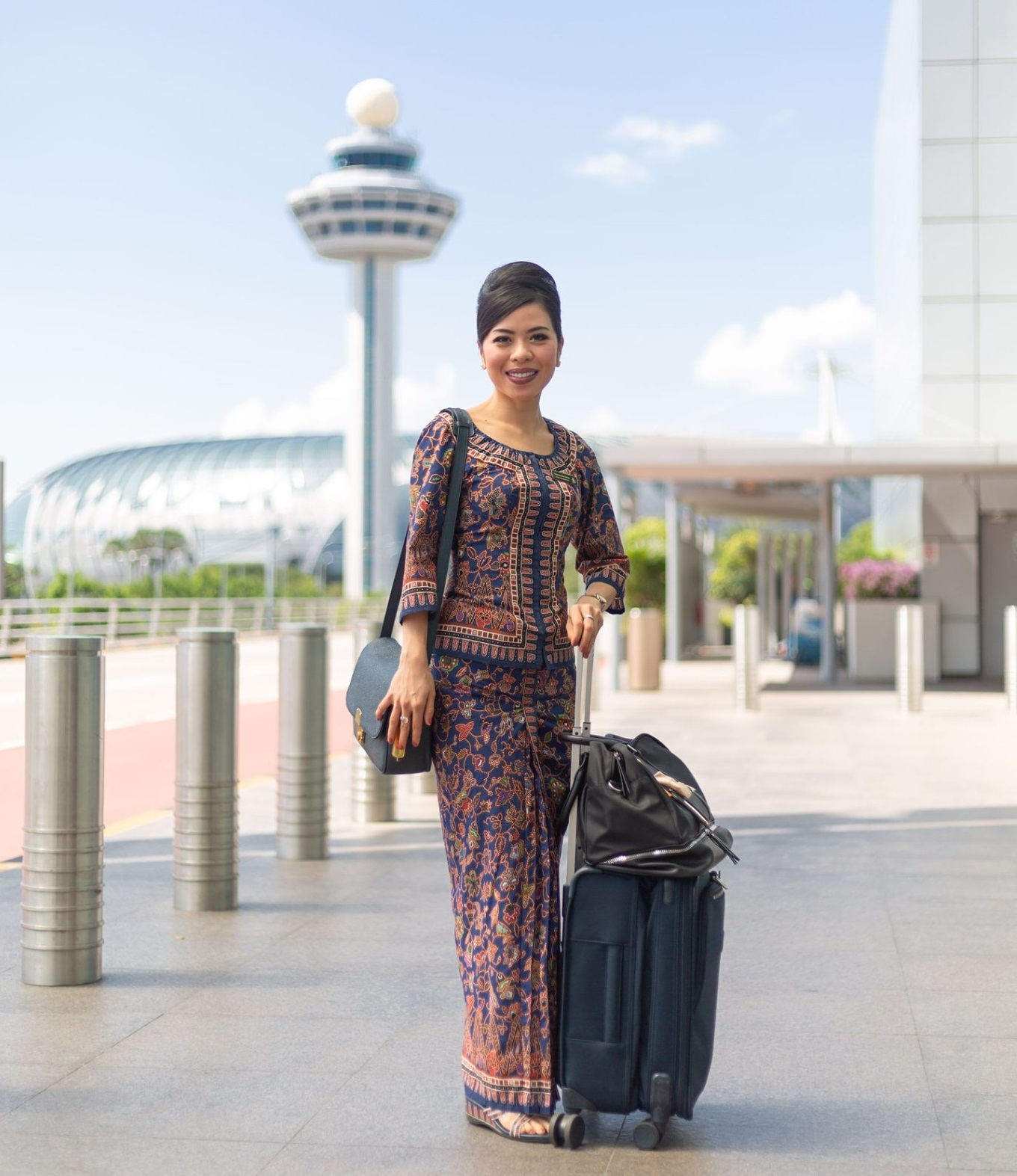 While others who failed and had a bad attitude were sent home, she duly started all over again.

Thus came another nightmare of retests, new classmates, and getting know everyone all over again.

When Ms Yon finally graduated, she thought of all the negative things others had said to her.

She felt proud that she fought hard and showed those who looked down on her that she could make it after all. 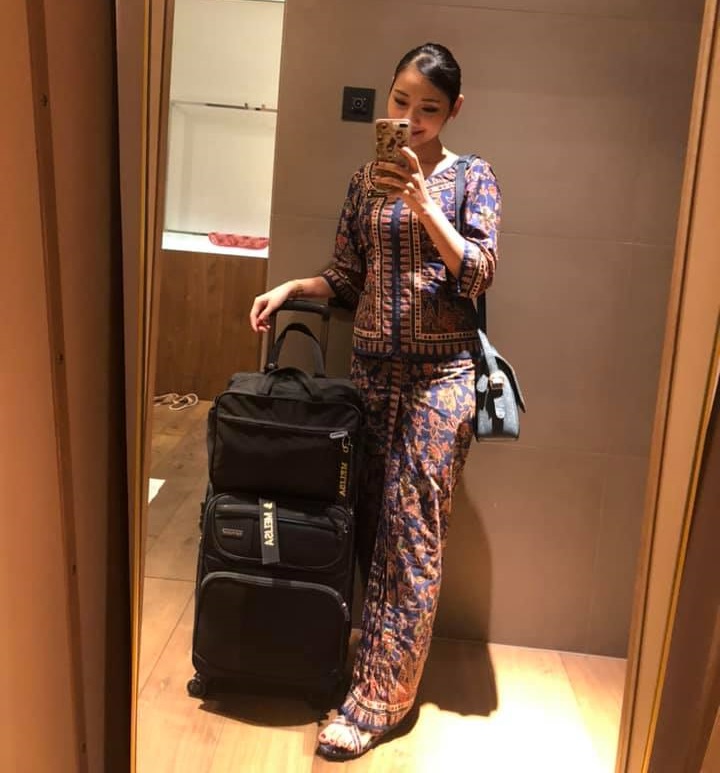 After a long journey fraught with twists and turns, her hard work had paid off, and her dream had come true.

This was probably the best time of her life so far, as she managed to fly to destinations she had always wanted to go to since young, like the United States, Britain, France and Switzerland. However, her story was about to take another twist.

Just a few months into her dream job, Covid-19 changed everything.

As she was staying in Singapore, she was just wasting money by spending it all.

Thus, she returned to Malaysia on 1 Apr, after many procedures such as applying for permission and getting a doctor’s letter.

She also had to go though a 14-day quarantine.

Back in Malaysia, though she was happy to be back with her family again, she had no income and wanted to return to Singapore so that she can fly again.

By the time it came to Jul and Aug, news that SIA would lay off staff filtered through, and Ms Yon and her colleagues started getting scared.

Eventually, she got the dreaded news: SIA would lay off the newest staff 1st (i.e. those who had served less than 2 years), and that included her.

When she got the email, she burst into tears.

She rationalised, SIA let 4,300 staff go, she’s just 1 of them — should she feel relieved?

Because she was in Malaysia and couldn’t attend the retrenchment meeting, the airline called her on 16 Sep to explain all the procedures.

In just a 10-minute phone call, she was retrenched, she said.

On 16 Dec, she officially left the company, as they sent her an email saying her work permit was invalid from that date.

Last photos of herself in SIA girl uniform

When Ms Yon found out that she was going to be retrenched, she decided to take some professionally done photos of herself in the iconic SIA girl uniform. 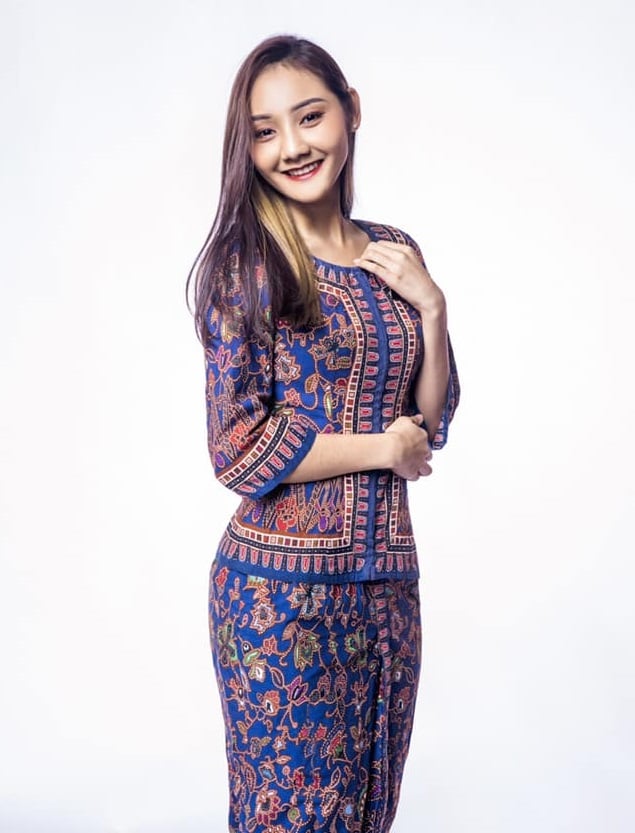 After all, she wanted something to show her grandchildren, to prove to them that their grandmother once was an SIA cabin crew.

She’s grateful for the support

Though her journey with SIA has ended, Ms Yon would still like to thank a few people.

Firstly, her parents, for encouraging her and giving her the confidence to face her challenges.

Secondly, her boyfriend, for also encouraging her, and being nice enough to come to Singapore to see her for 1 day before rushing back to Malaysia to work.

Lastly, she’d like to thank herself, as even she never thought she’d make it this far.

Because of that, she’s become the person she admires the most.

She’d also like to tell girls who’ve the same dream of being a cabin crew to try it out after Covid-19 has passed and not to be scared of failure.

That’s because one day, success will come, she said.

Ms Yon frankly admits that she’s unemployed now, and can’t face her current life as she was so used to working irregular hours as a cabin crew.

However, she still remains optimistic, and will fight for her future. 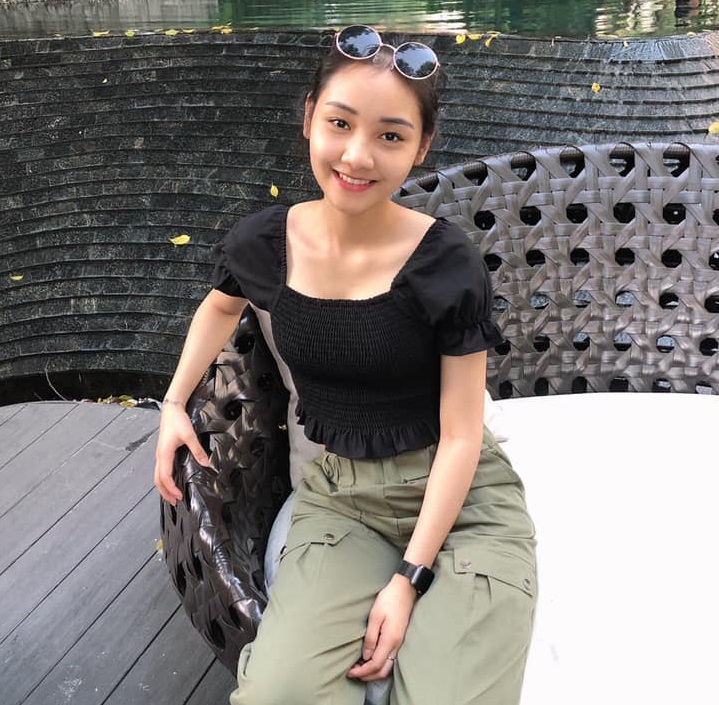 Somebody told her that she’s not unemployed, but just back to where she started, and she agreed.

Thus, she wants to tell colleagues who’ve been through to move forward boldly.

Ultimately, she has no regrets about what’s happened, as she’s fulfilled her dream, and that’s enough.

She’s on to her next venture already

In a subsequent post on Friday (18 Dec), she shared photos of herself in a hydroponic vegetable garden. 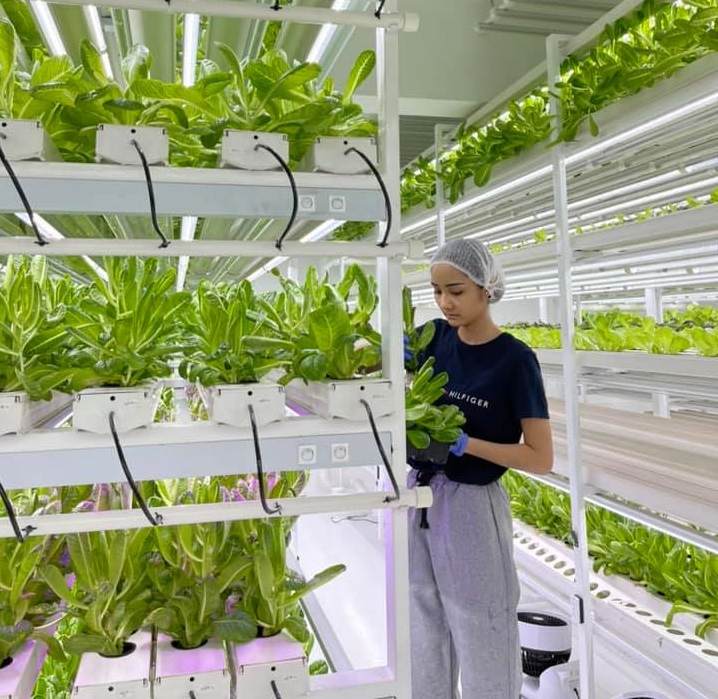 She invited people to take a stroll in the vegetable garden, and relax at her salad bar with the “freshest vegetables”.

It looks like she’s on to her next venture already!

Her perseverance & spirit is admirable

Ms Yon has certainly gone through a lot, and survived many failures on the road to fulfilling her dream.

Just when she finally achieved her goals, they were unfortunately cut short by Covid-19.

What matters, however, is that she never gave up, and did it in the end.

Her perseverance and spirit is admirable, and we should hope to emulate her in everything that we do.

We wish her all the best for her future, but we think she won’t need it, as her can-do attitude means she’ll succeed in anything she wants to do.