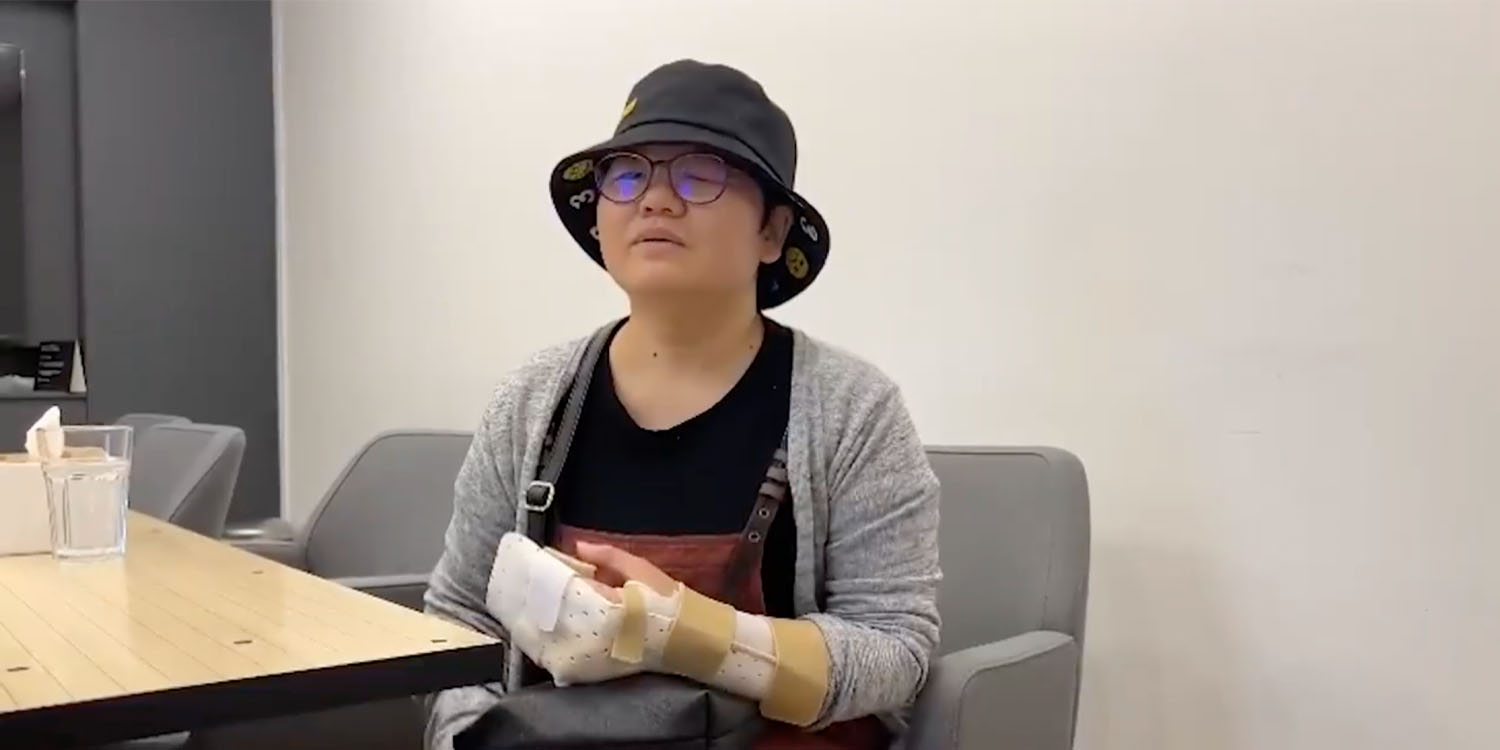 She thanks everyone who helped her in one way or another.

Beach Road Slashing Victim Thanks Everyone Who Helped Her

In April, a horrific slashing incident occurred outside a restaurant on Beach Road, leaving many Singaporeans disturbed and shocked by the blatant display of violence in broad daylight.

Viral clips captured the victim, Ms Han Hongli, being attacked multiple times by a knife-wielding man, said to be her ex-husband.

It’s been three months since, and Ms Han continues to persevere through the darkest period of her life as she recovers from her injuries.

She shared with The Straits Times (ST) that she wants to keep living for the sake of her two children.

The 42-year-old also thanked everyone who helped her — both on the day of the attack and during her recovery journey.

After being slashed several times by a chopper on 14 Apr, Ms Han was severely injured.

She had to undergo multiple surgeries and was discharged from the hospital on 19 May. Since then, she has been undergoing physical rehabilitation.

Speaking to ST, the mother of two shared that she was thinking of her 19-year-old daughter and 16-year-old son throughout the challenging time.

Her children are currently living in her hometown, Henan, China. When they learned of the incident, they wanted to drop out of school and seek employment immediately to help pay her hospital bills.

But this made Ms Han furious. She told them they were her only hope, and quitting school would mean her struggles were for naught.

Her children remain her motivation to recover fully. Speaking in Mandarin, she said, “I hope I’ll be able to see them through their schooling after I recover”.

Grateful to restaurant owners who saved her life

Ms Han also thanked everyone who had helped her through the incident in one way or another.

The 42-year-old revealed to ST that she found out that the owner of Samurai BBQ, Mr Leonard Shi, and her colleagues at Zhong Hua Steamboat restaurant had risked their lives to help chase the assailant away on the day of the incident.

She expressed her gratitude to them for saving her life and would like to thank them with a bow once she recovered. 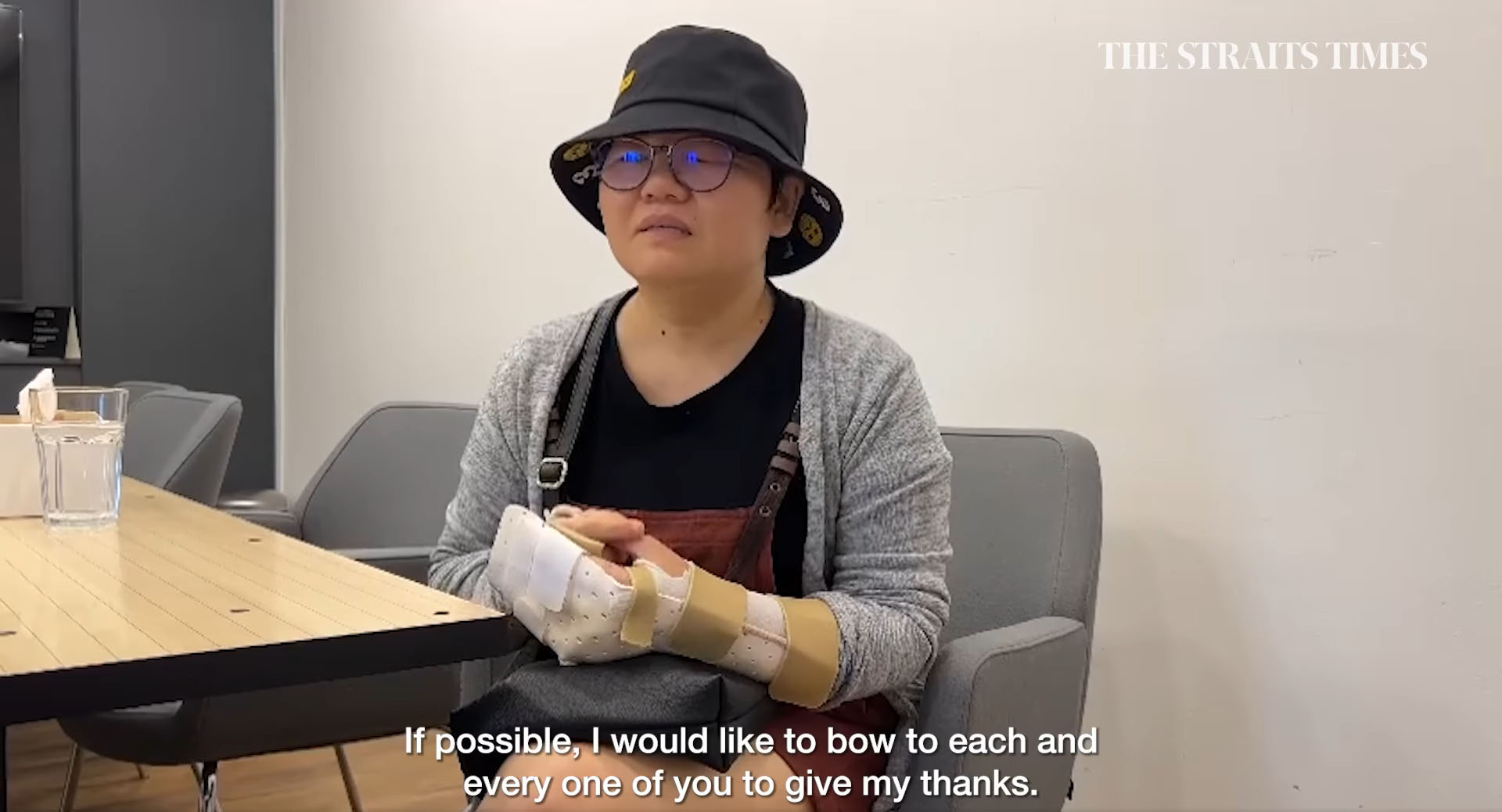 Besides them, she said Mr Zhuang from the Chef China restaurant also helped her tremendously in other ways, although he wasn’t at the scene then.

Donors & charity organisations supported her along the way

Ms Han also extended her thanks to local charity Ray of Hope for setting up a fundraising campaign for her.

Because of them, so many kind-hearted people knew about her story, empathised with her, and donated to help pay her hospital bills within a short time.

She hoped that she could meet and thank each of her donors personally.

Ms Han also thanked Singapore Han Clan Association, which helped raise some funds for her medical bills. She added that other charity organisations have also been quietly but continually helping her along the journey, and they do not wish to be named.

To recap the incident, Ms Han was viciously attacked by a man armed with a chopper on 14 Apr.

As he slashed her repeatedly, bystanders hurled objects at him to stop him.

On 16 Apr, the 46-year-old perpetrator Mr Cheng Guoyuan was charged with attempted murder.

Ms Han was hospitalised for her multiple injuries. According to Ray of Hope, she had undergone surgeries for her eyes, head, and hands.

The charity had helped to raise around S$105,400 for her bills and caregiving needs.

ST reported that the charity is still working with the hospital and Ms Han’s employer to settle her medical bills and insurance paperwork.

Wishing her all the best on her recovery journey

The slashing incident was extremely traumatising for Ms Han, both physically and emotionally.

We’re glad that throughout her recovery, she felt the love and support from family and friends here.

We wish her all the best as she continues her recovery journey.

Featured images adapted from The Straits Times on Facebook.