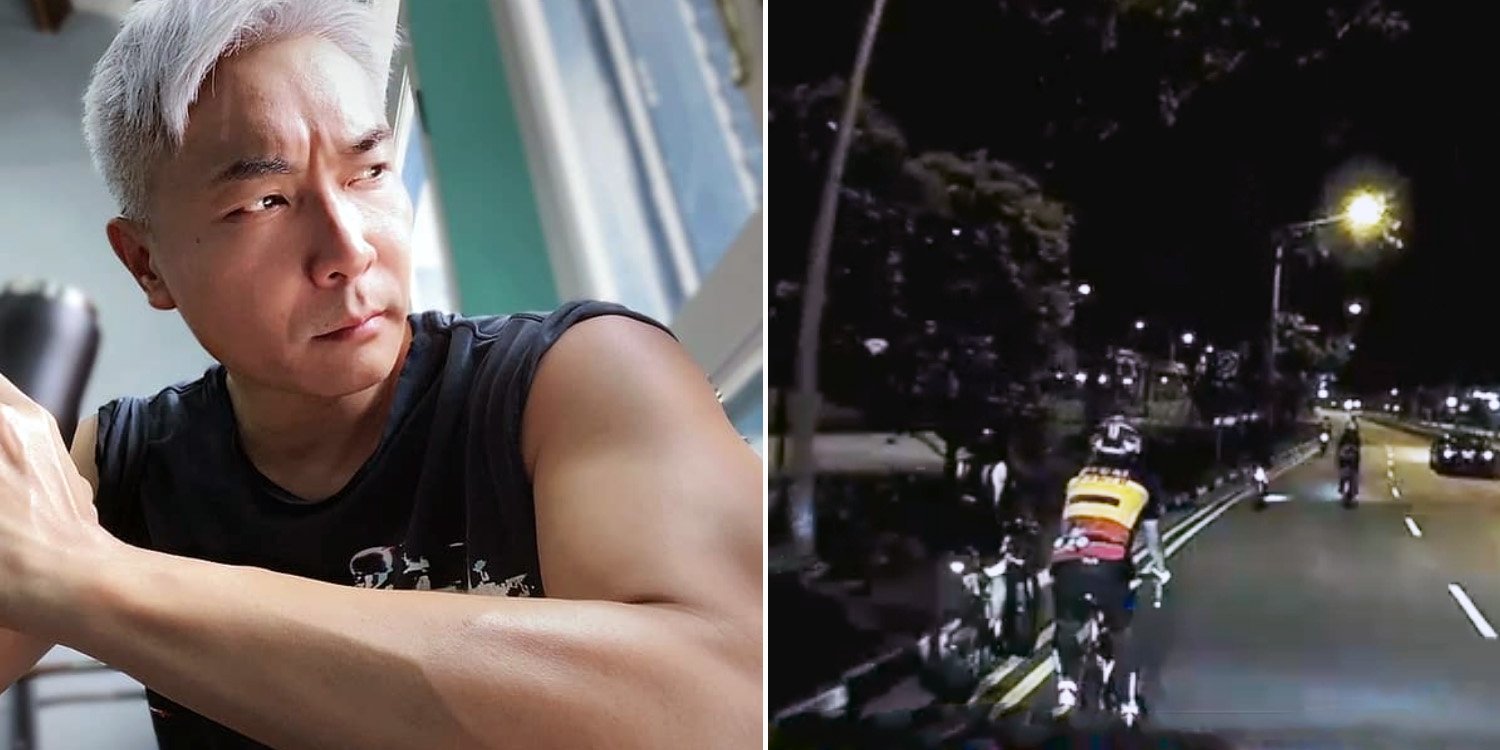 Tay Ping Hui Responds To Critics, Says He’s Got Nothing Against Cyclists

Cycling is widely considered a healthy form of travel. Yet in recent weeks, the activity has drawn strong reactions from Singaporeans, especially on the Internet.

Local actor Tay Ping Hui recently made the news after he posted a video of his potentially dangerous encounter with cyclists.

In a follow-up post on Thursday (15 Apr), Mr Tay responded to critics by saying that he has nothing against cyclists. In fact, he thinks it would be more constructive for motorists and cyclists to stop insulting one another and focus on the real issue. 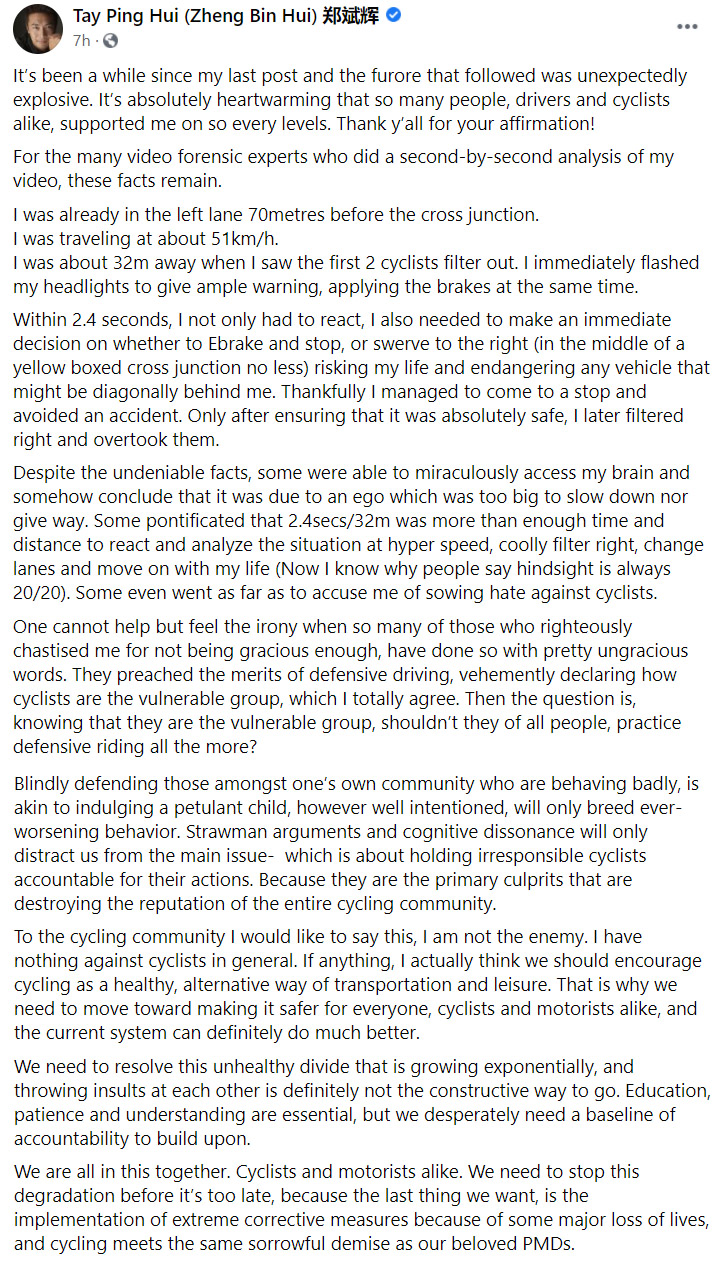 He opined that cycling is a healthy form of travel that should be encouraged, which is why he thinks the current system can improve by ensuring the activity is safer for both cyclists and motorists.

Here’s a summary of what he has to say.

Tay Ping Hui says he was chastised for not being gracious

Mr Tay explained that his last post has caused quite a stir among the community — it was “unexpectedly explosive”.

While he said it was heartwarming to see drivers and cyclists supporting him, there were also critics who chastised him for not being gracious enough. 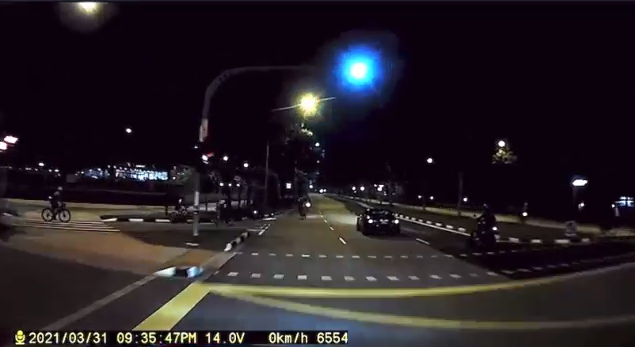 They reportedly pointed out that there were merits to defensive driving, considering how cyclists are the more vulnerable group.

Then the question is, knowing that they are the vulnerable group, shouldn’t they of all people, practise defensive riding all the more?

Thinks irresponsible cyclists must be held accountable for their actions

After his post had gone viral, Mr Tay said there were some who accused him of “sowing hate against cyclists”. 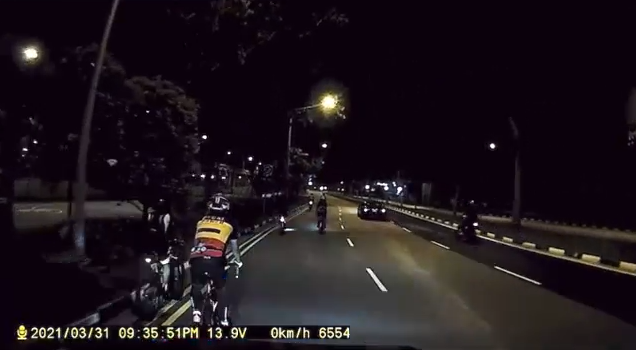 He said these “strawman arguments” would only distract them from the main issue, i.e. holding irresponsible cyclists accountable for their actions.

Sending his message across to the cycling community, he stressed, “I am not the enemy. I have nothing against cyclists in general.”

Cyclists & motorists are in this together

Mr Tay emphasised that he thought cycling is a healthy, alternative way of transportation and leisure, which is all the more reason society should move towards making the activity safer for everyone.

He hopes to resolve this unhealthy divide among cyclists and motorists, because throwing insults at one another isn’t constructive.

While education, patience, and understanding are equally important, what Singaporeans “desperately need” is a “baseline of accountability to build upon”.

We are all in this together. Cyclists and motorists alike. We need to stop this degradation before it’s too late.

He believes that the last thing everyone wants, is for extreme corrective steps to be put into effect, which may or may not lead towards bicycles meeting the same “sorrowful demise” as personal mobility devices (PMDs).

With more people taking up cycling these days, Mr Tay does have a point.

Instead of hurling insults at one another, it would be more fruitful for everyone to channel their efforts into making cycling a safe activity for everyone.

And one day, we may just be able to make cycling in our garden city great – and safe – again.

Are you a driver, or a cyclist? What do you think of Mr Tay’s thoughts? Let us know in the comments below.