It’s not everyday we can afford a condominium unit, let alone 45. But for one of Singapore’s richest men, such things are bulk buys.

Take it from veteran banker Wee Cho Yaw, the chairman emeritus of United Overseas Bank (UOB), who just bought all 45 unsold units from The Nassim for a whopping $411.6 million, reported The Straits Times.

Did someone say ‘Kaching’?

So what’s the point of Mr Wee buying so many units?

Besides having 45 condo units to spare to give as ang pows to friends and relatives for the Chinese New Year, he got an 18 per cent discount on the current individual unit sale price, making his bulk buy extremely worth the money.

All he has to do is sit back and watch as the money rolls into his bank. 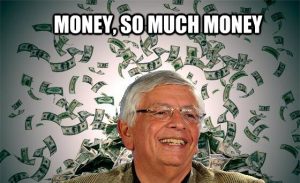 Why The Rush To Sell?

Foreign developers are desperately trying to avoid penalties under the Qualifying Certificate (QC) scheme, one requirement of which is for all units to be “100% sold within two years after completion”. (Source: New Condo Launch Online)

This means that if The Nassim fails to do that, its developers would be subject to an extension charge that is pro-rated based on the number of unsold units. The penalties could have amounted to millions of dollars.

The best solution? Bulk purchases. This ensures that all units are sold within the deadline and QC can’t catch up to you. I’d say it’s almost like a race:

Now that Mr Wee finds himself winning the race against the QC, what can he do with the 45 units and a whole lot of space?

We don’t know about you Mr Wee, but here are some things we would do with 45 empty units.

We hope Mr Wee finds a way to solve his #firstworldproblem of what to do with so many units.