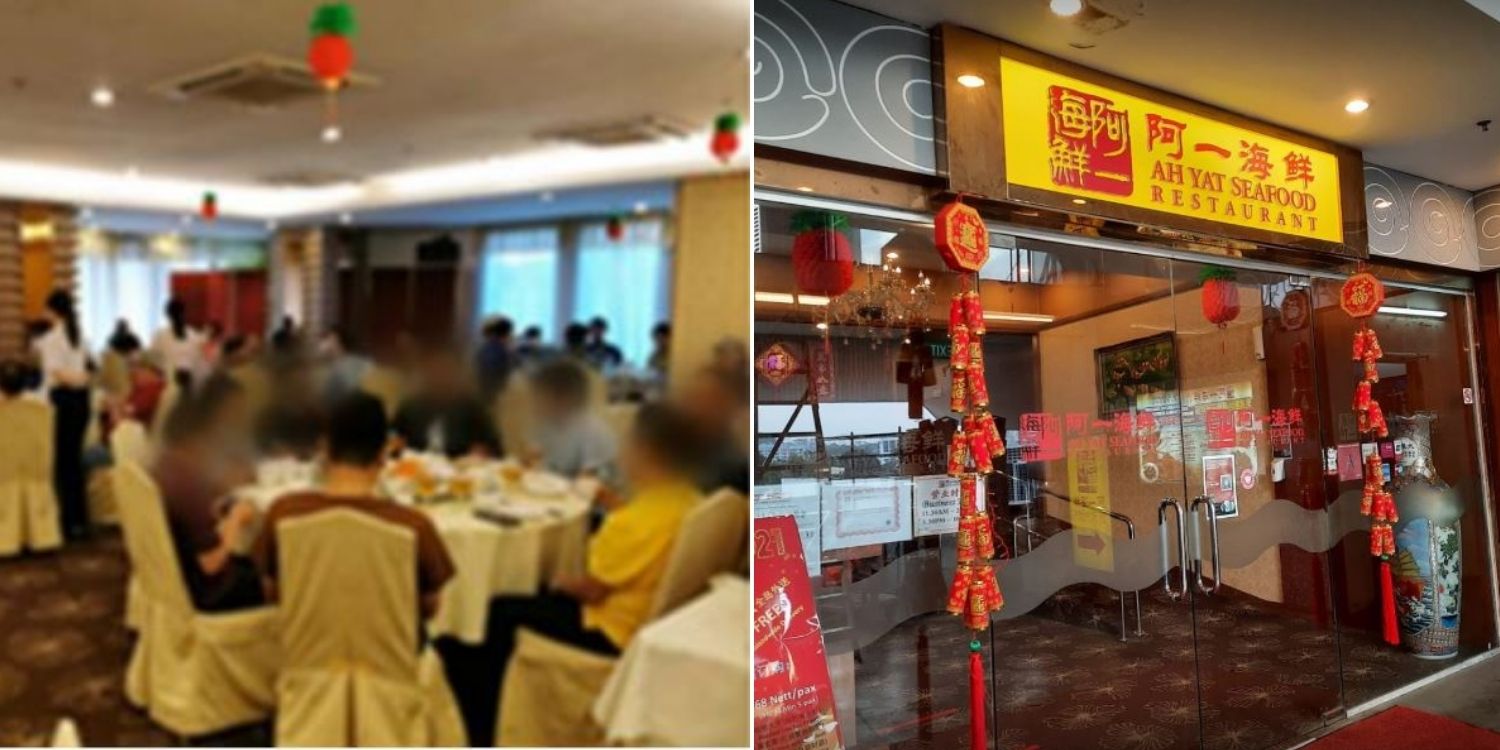 In the lead-up to Chinese New Year (CNY), some may be looking forward to celebrating with colleagues before the public holidays.

However, this year isn’t the same as previous years, with Covid-19 now circulating in the community.

Hence, large company CNY gatherings should be a huge no-no, but some don’t seem to realise this yet.

One company decided to hold a dinner with 65 people at a restaurant in Turf City. 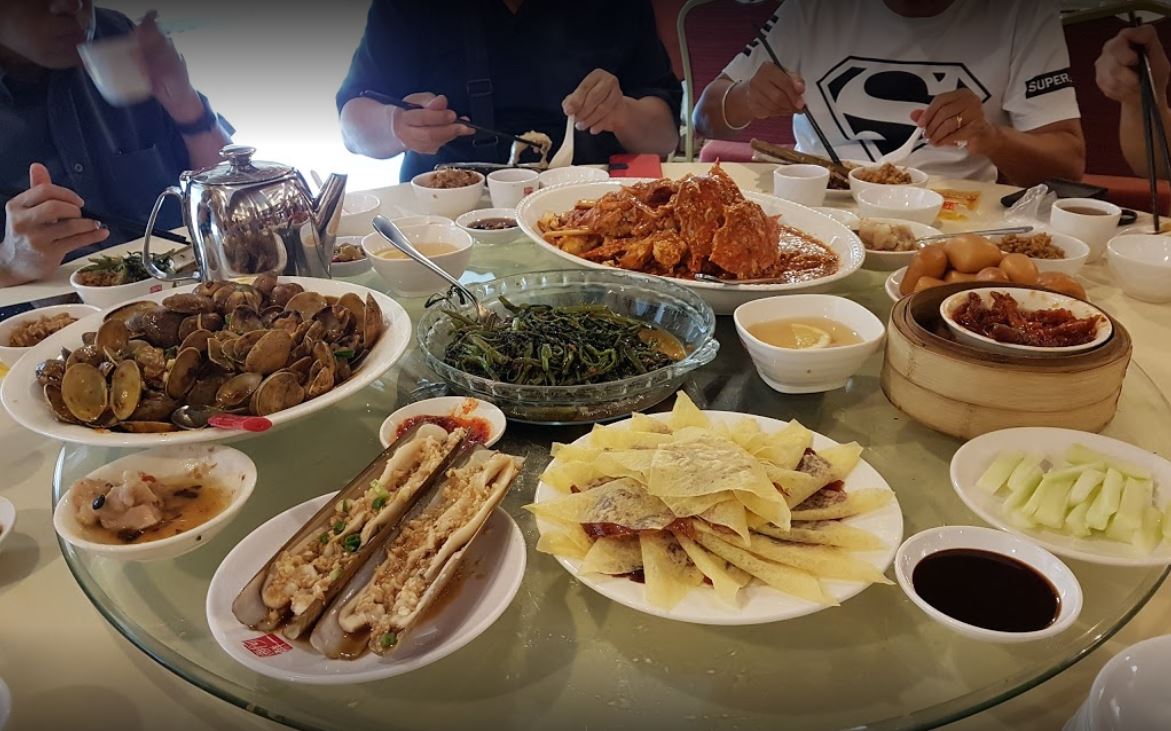 For allowing this gathering to take place, Ah Yat Seafood Restaurant was ordered to close over the lucrative CNY period.

That means while other F&B outlets will be taking advantage of the public holidays to boost their takings, Ah Yat Seafood Restaurant will be unable to open for business.

4 Chinese restaurants shut down over CNY

In a media release on Wednesday (10 Jan), the Ministry of Sustainability and the Environment (MSE) said inspections on F&B businesses continued over the past week.

As a result, 6 food and beverage (F&B) outlets have been ordered to shut down — that means they’ll lose out on business over the CNY period.

4 of them are Chinese restaurants that allowed pre-CNY gatherings of more than 8 people.

One of them is Ah Yat Seafood Restaurant, located at The Grandstand at Turf Club Road. 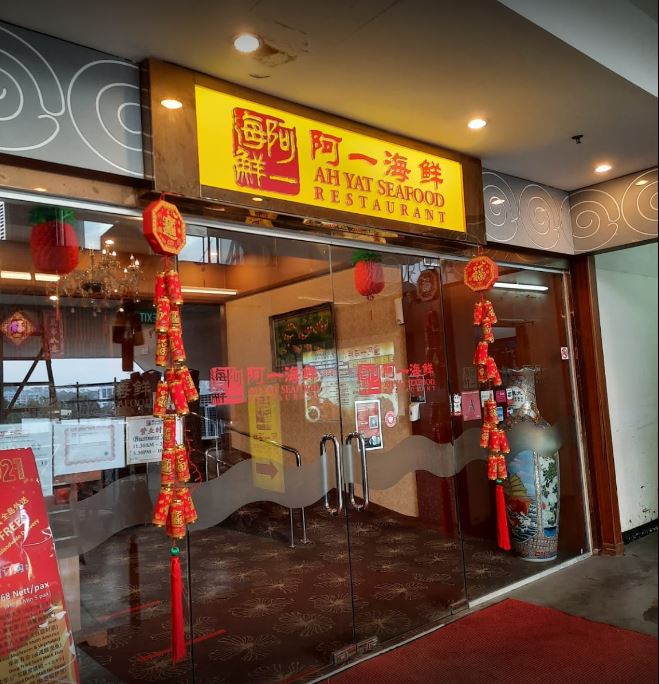 On Saturday (6 Feb), the seafood restaurant allowed a company dinner to be held on its premises.

65 people in total attended the event, and they sat across 9 tables. 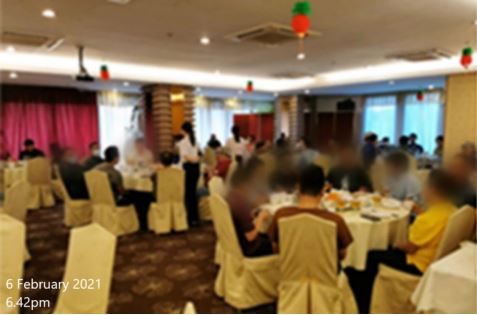 The suspension will last throughout the lucrative CNY period.

On 29 Jan, another Chinese restaurant hosted a company dinner.

The 16 diners were split across 2 tables at East Treasure Chinese Restaurant, at 3B River Valley Road. 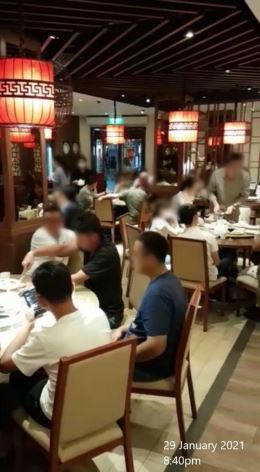 For organising the gathering of more than 8, the company was fined $1,000.

Over at Crystal Jade Jiang Nan at VivoCity, a group of 16 people were found to be dining in on Saturday (6 Feb).

They were split across 2 tables, but they were part of the same group, and from different households. 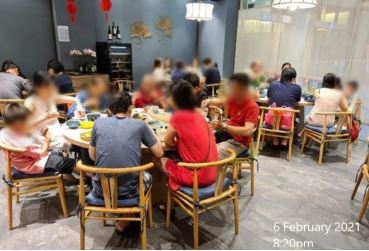 For breaking the rules, the restaurant operator was told to close down for 10 days from 10-19 Feb.

13 diners fined $300 each despite being split across 3 tables

The restaurant allowed them in, and seated them across 3 tables. 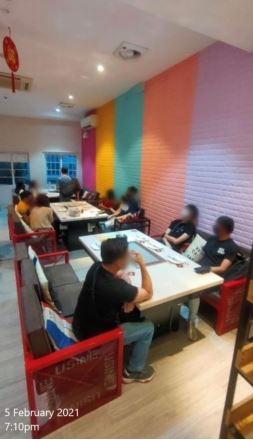 However, that’s still against the rules, and as such all 13 of them were fined $300 each.

Diners consumed alcohol at 2.30am

2 other F&B outlets were shut down for flouting safe management measures.

A restaurant on New Bridge Road was shut down for allowing patrons to drink alcohol after 10.30pm, which is against the rules.

Diners were seen drinking at Wangzi Music Restaurant at 2.30am on Saturday (6 Feb). 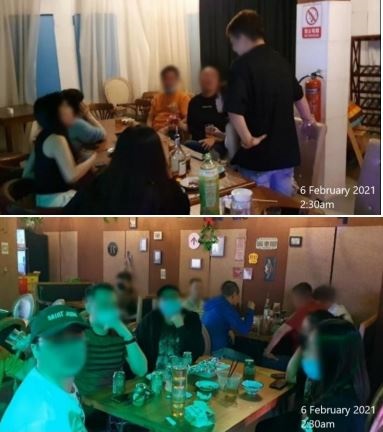 Zam Zam, on North Bridge Road, on the other hand, had sat different groups of diners too close to one another. 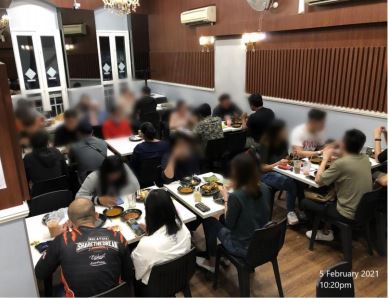 Operator of Banana Leaf Apolo to be charged in court

Besides the closures, 1 F&B operator will also join the ranks of those charged in court for multiple breaches of the rules.

The operator of Banana Leaf Apolo will get the more severe punishment for several offences committed at its restaurant on 48 Serangoon Road. 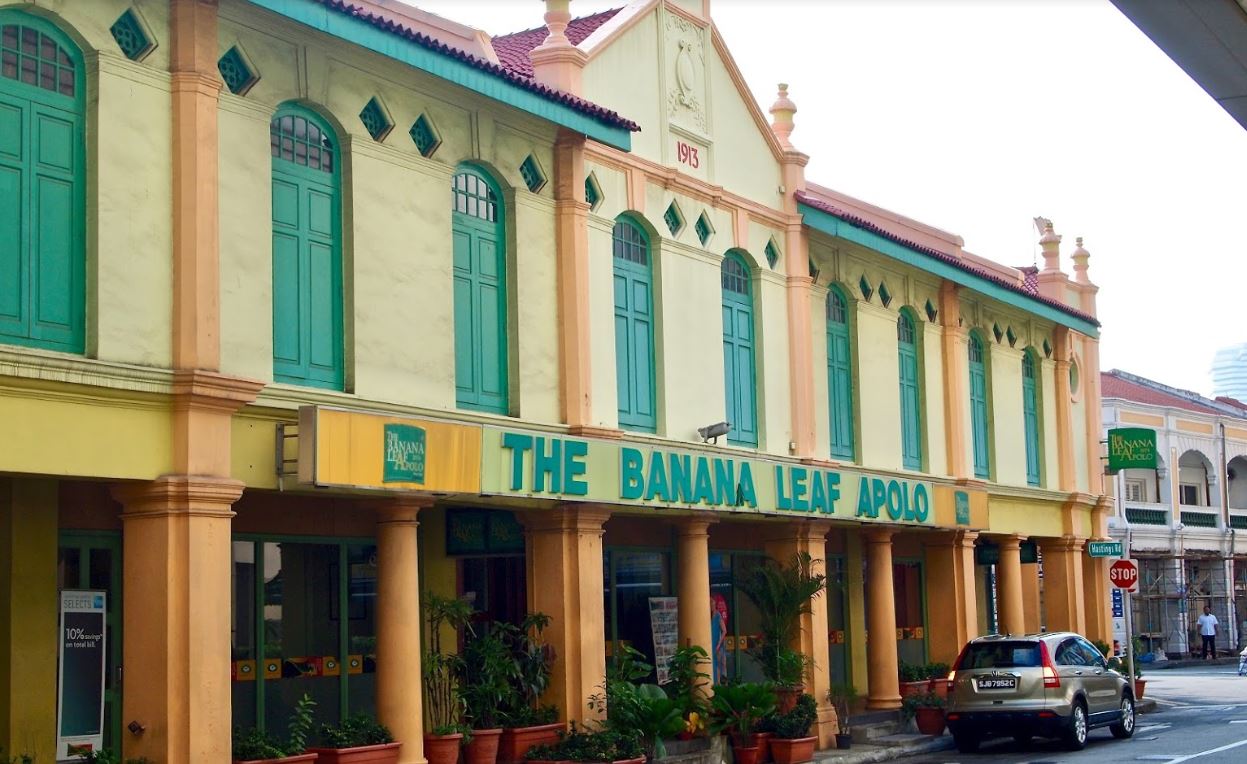 The Singapore Tourism Board (STB) filed a complaint against the outlet’s operator on 20 Jan, and the operator will be charged on 17 Feb.

5 other F&B outlets fined for seating diners too close

Apart from the above punishments, 5 other F&B outlets were also fined for seating groups of diners too close together (i.e. less than 1m apart). 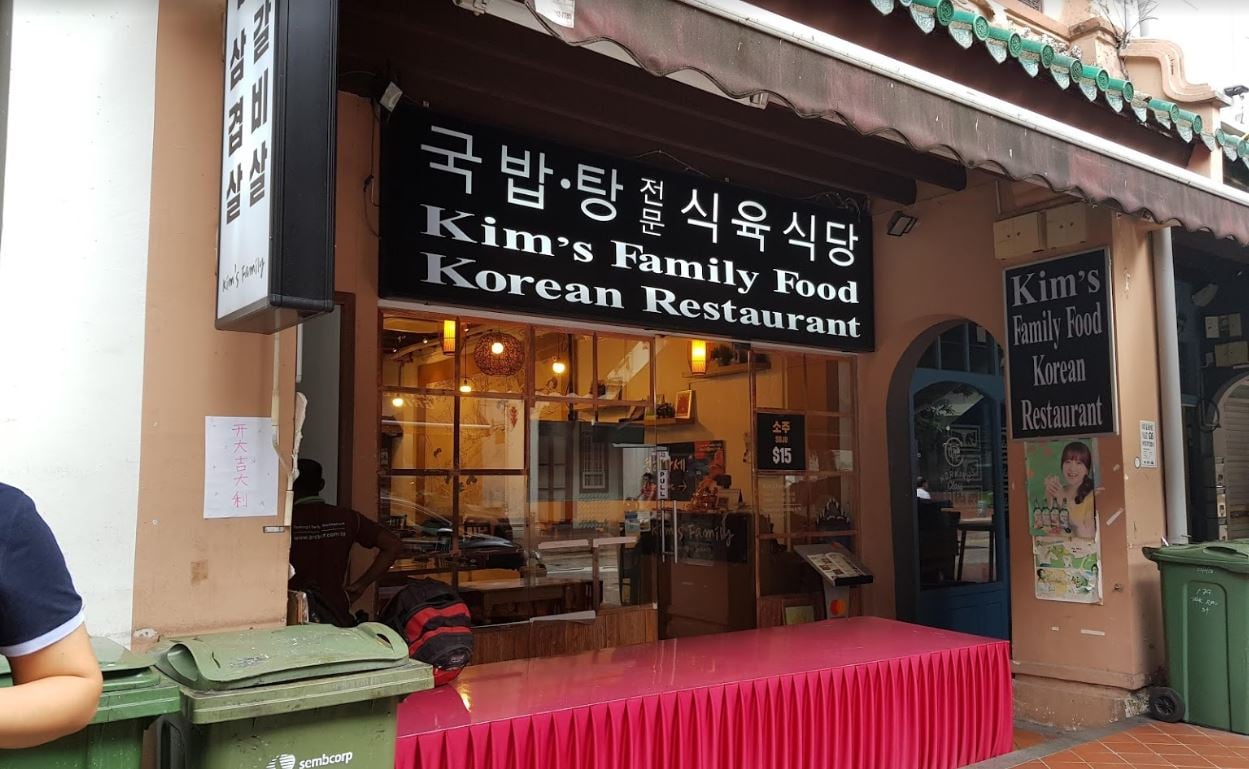 All were fined $1,000 each except for Eating House at Upper Cross Street, which was fined $2,000 for its 2nd offence.

The MSE had previously warned that government agencies were going to escalate their inspections over the festive period.

To that end, about 3,000 safe distancing ambassadors and enforcement officers are being deployed every day at public places. 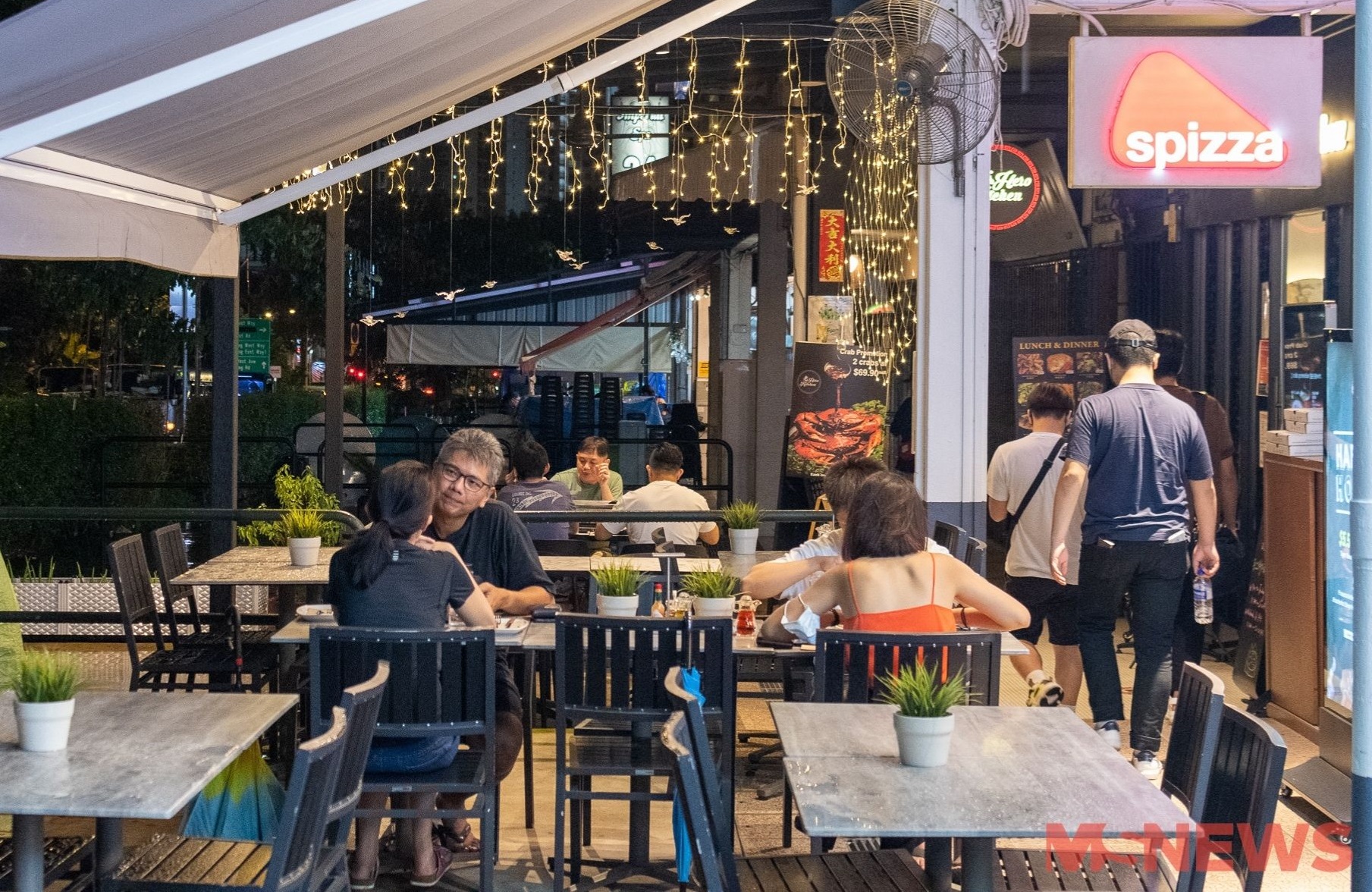 During peak hours and weekends, more are deployed. A greater number will also patrol hotspots that see greater human traffic.

Their job is to ensure safe distancing measures are being followed.

MSE urges diners not to get around the rules

Thus, MSE has urged diners not to try to get around the rules for the sake of their loved ones and the safety of the community.

The ministry emphasised that groups larger than 8 are not allowed, even if bookings are made for multiple tables. Mingling between tables also isn’t allowed.

An exception can only be made of all the diners are from the same household.

MSE also advised F&B operators to double-check their reservations to make sure that no offences will be committed.

Having an F&B outlet shut down due to your CNY celebration is obviously quite a downer.

Nobody wants the livelihood of an F&B business to be affected, especially during CNY, but we’ve already been repeatedly warned about large gatherings.

That’s because the authorities are wary that CNY gatherings will lead to more Covid-19 community infections, as was the case last year.

So please follow the rules, or the result of our celebrations will be sickness and death.