You might have never heard of Ah Long San but he’s one of Singapore’s most notorious criminals. His crime? Running an illegal money-lending syndicate.

His illicit activities kept him on the list of Singapore’s most wanted for a long time.

On Tuesday (28 Aug), The Straits Times reported that his days of crime were effectively over. That’s because Ah Long, 62, passed away after a heart attack in Geylang early on Monday morning.

Fitting place for him to die, since Geylang was where he carried out many of his illegal activities.

Alicia Keys sounds like the perfect name for a pop singer.

And Ah Long San sounds like a perfect name for a loanshark. But Ah Long San wasn’t actually born with that career-fitting name. At the height of his notoriety in the 1990s, Ah Long San made approximately $500,000 a month. His illicit activities spread far and wide, with his money-lending business being the most successful.

But Ah Long also engaged in legal activities, including the running of a karaoke bar. He owned at least one of these at the time of his death, according to ACRA.

Ah Long San’s illicit activities were a family affair, with brother Chua Tiong Chye also helping out. With support like this, Ah Long San’s business thrived, with more than 40 runners chasing after thousands of borrowers.

4. He had power within the Police force

Ah Long San cultivated a network of police officers to help in his syndicate. Crooked cops within the force alerted him to raids and their tip-offs helped Ah Long evade arrest for nearly a decade.

To keep police officers in line, Ah Long bribed them with hefty sums of money, entertainment at nightclubs and lavish holidays. He even sponsored a cop’s law education in Britain.

Ah Long managed to bribe 9 policemen in all. All of them were eventually dealt with with jail terms and fines.

Ah Long didn’t just use bribes to stay out of jail, he also used fear. Many who were in the know of his illicit activities chose to remain silent instead of risking danger to their loved ones.

6. His driver sold him out

In the end, it took just one person to bring about Ah Long’s downfall. Ah Gee was Ah Long San’s chauffeur and had sworn to secrecy his employer’s criminal habits.

But repeated efforts by the Corrupt Practices Investigation Bureau to gain Ah Gee’s trust worked and the once-faithful driver spilled the beans on his criminal employer.

Ah Long was eventually convicted of bribing public officers and he was sentenced to 18 months in jail in 1999. Instead of facing the music, he went into hiding while out on bail.

After 2 years of being on the run, he surrendered to the authorities. He was later sentenced to 10 years in jail, at that time the heaviest sentence meted out for graft.

CPIB detailed its long battle with Ah Long San in a 120-page book called The Journey – 60 Years of Fighting Corruption in Singapore. 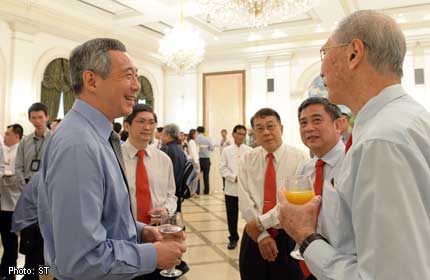 It highlights many high-profile cases of criminals from all walks of life, including Ah Long San.

As Singapore bids goodbye to a hardened criminal, we at MustShareNews thank CPIB for their efforts to keep our country corruption-free.