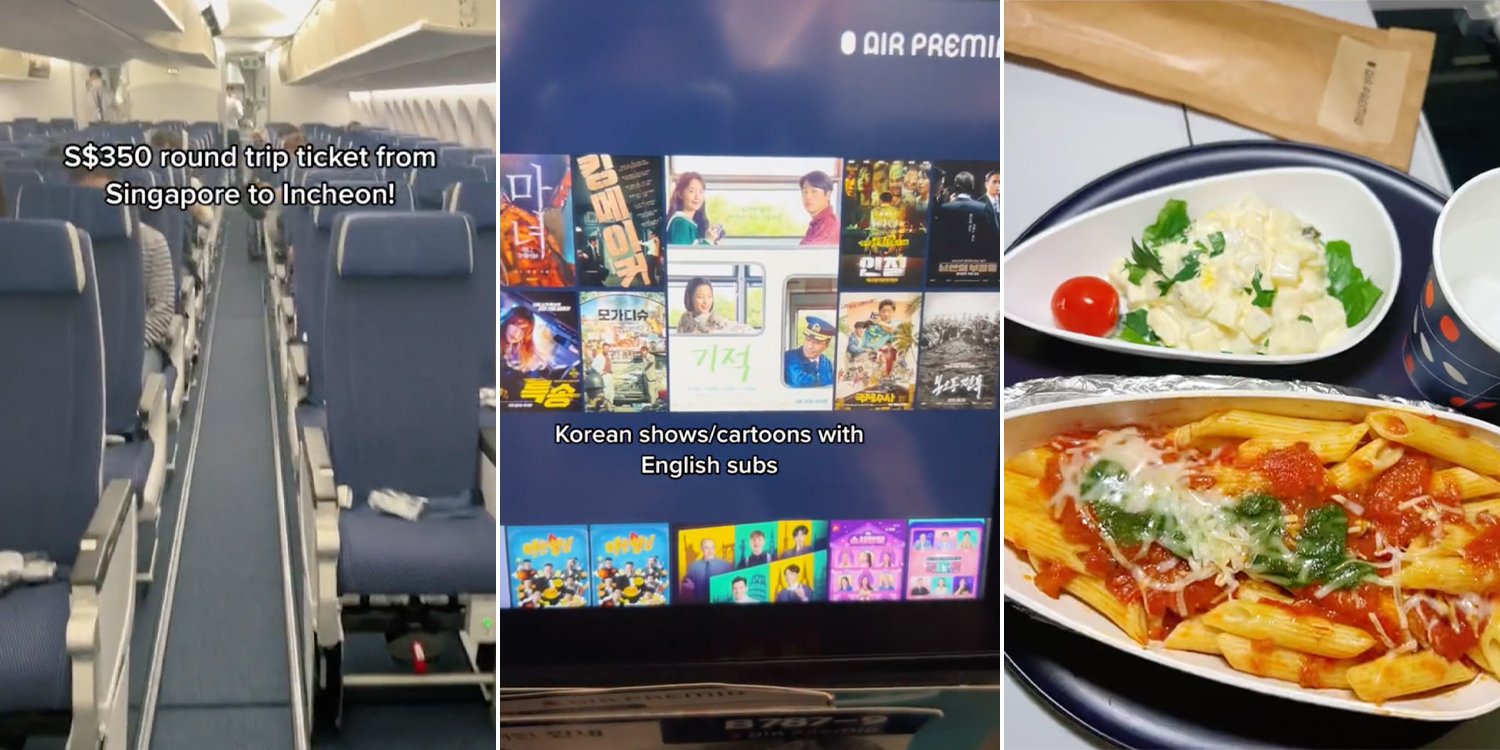 The plane was new and clean, and had ample legroom.

With amazing food and endless shopping, Korea is one of Singaporeans’ favourite destinations to travel to. But getting there is not always the cheapest.

Earlier this month, Singapore food and travel blogger Elanor who goes by the handle @luvthecalories shared a TikTok video about how her two-way flight to Korea only cost S$350.

Plus, her Air Premia flight had legroom, in-flight entertainment, and hot meals.

Many were amazed at the value-for-money price tag of the flight and thanked her for the recommendation.

On 14 Nov, Elanor shared in her TikTok video that she paid S$350 for her Air Premia round-trip ticket from Singapore to Incheon in South Korea.

According to her, the flight had a 15kg or 23kg luggage allowance and seats had more legroom than what one would typically get for economy class. 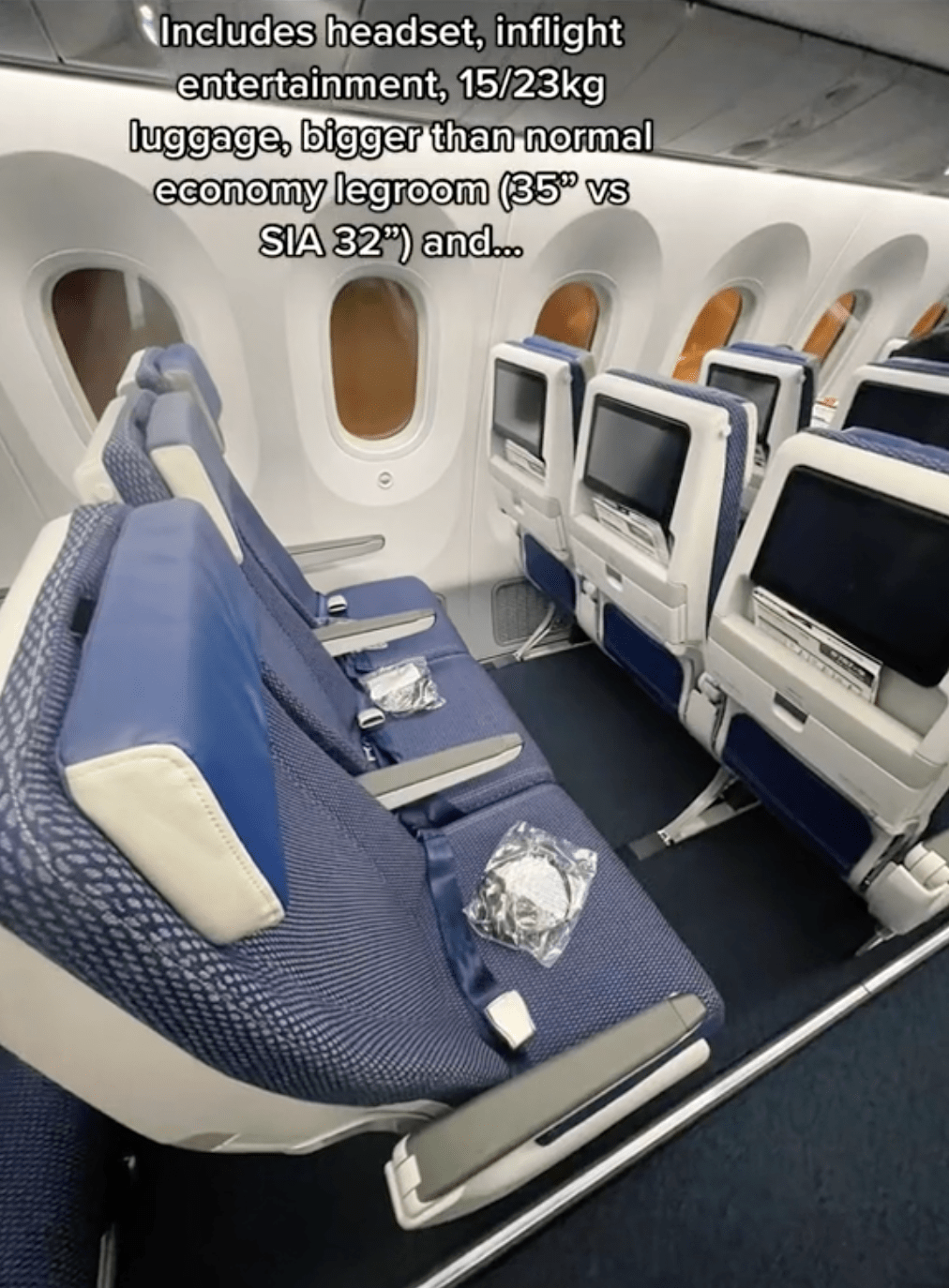 Even at full stretch, Elanor still had legroom of about 35 inches in front of her.

In contrast, she claimed that the legroom on a Singapore Airlines (SIA) economy flight there is 32 inches.

Another tiny detail that was a plus point for her was that the headrests can be folded at the sides. 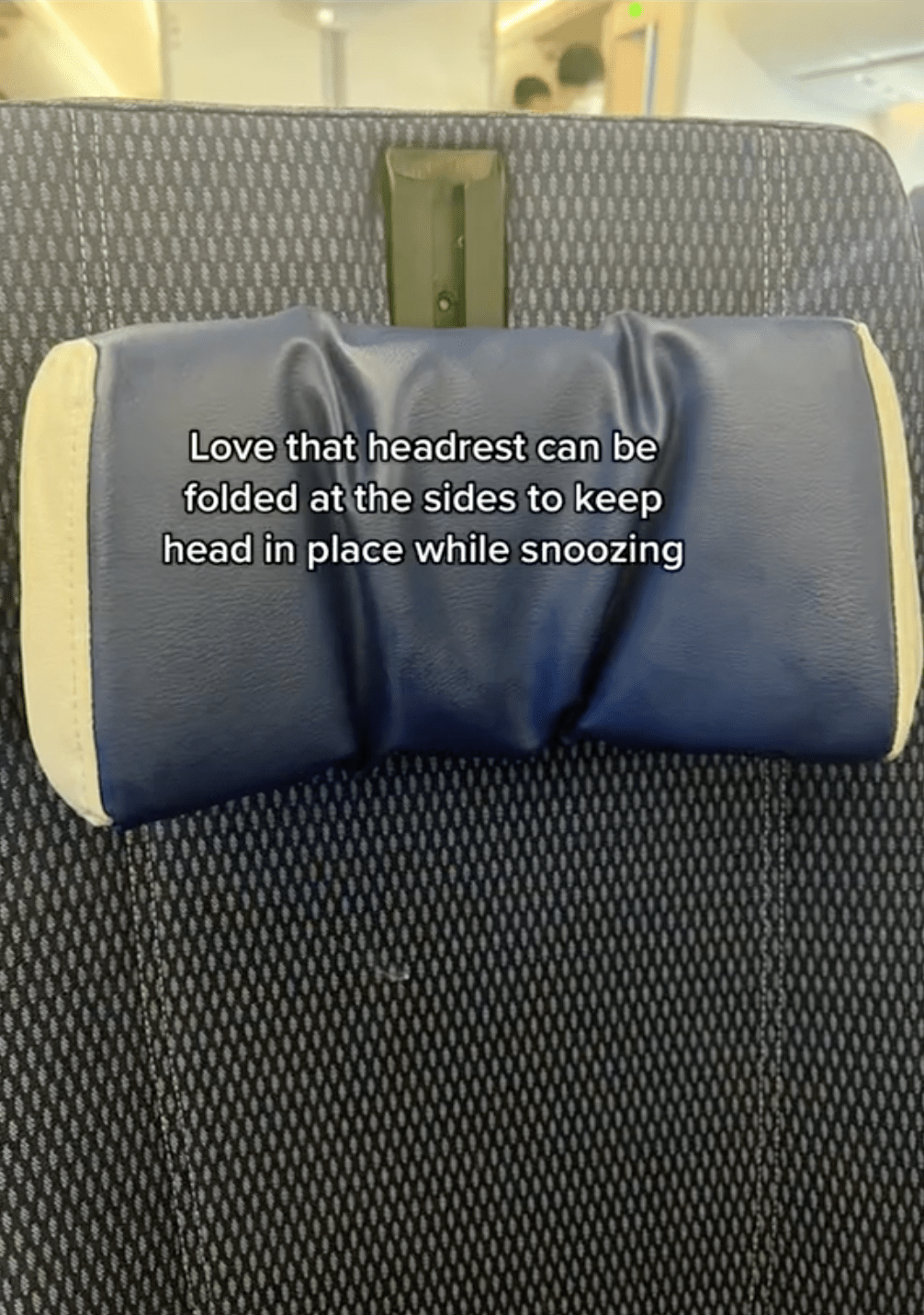 Definitely useful for those who love to snooze on their plane ride.

Even with the affordable ticket, Air Premia provides in-flight entertainment. In her video, Elanor showed off their wide selection of Korean movies.

Passengers can catch their favourite K-dramas as well as Korean cartoons on the flight. And yes, there are English subtitles.

The flight also provides headsets to passengers so there’s no need to fumble around finding your own earphones.

On her departing and returning flights, Elanor got to try two Air Premia meals, the first of which was penne in tomato sauce with potato salad on the side. 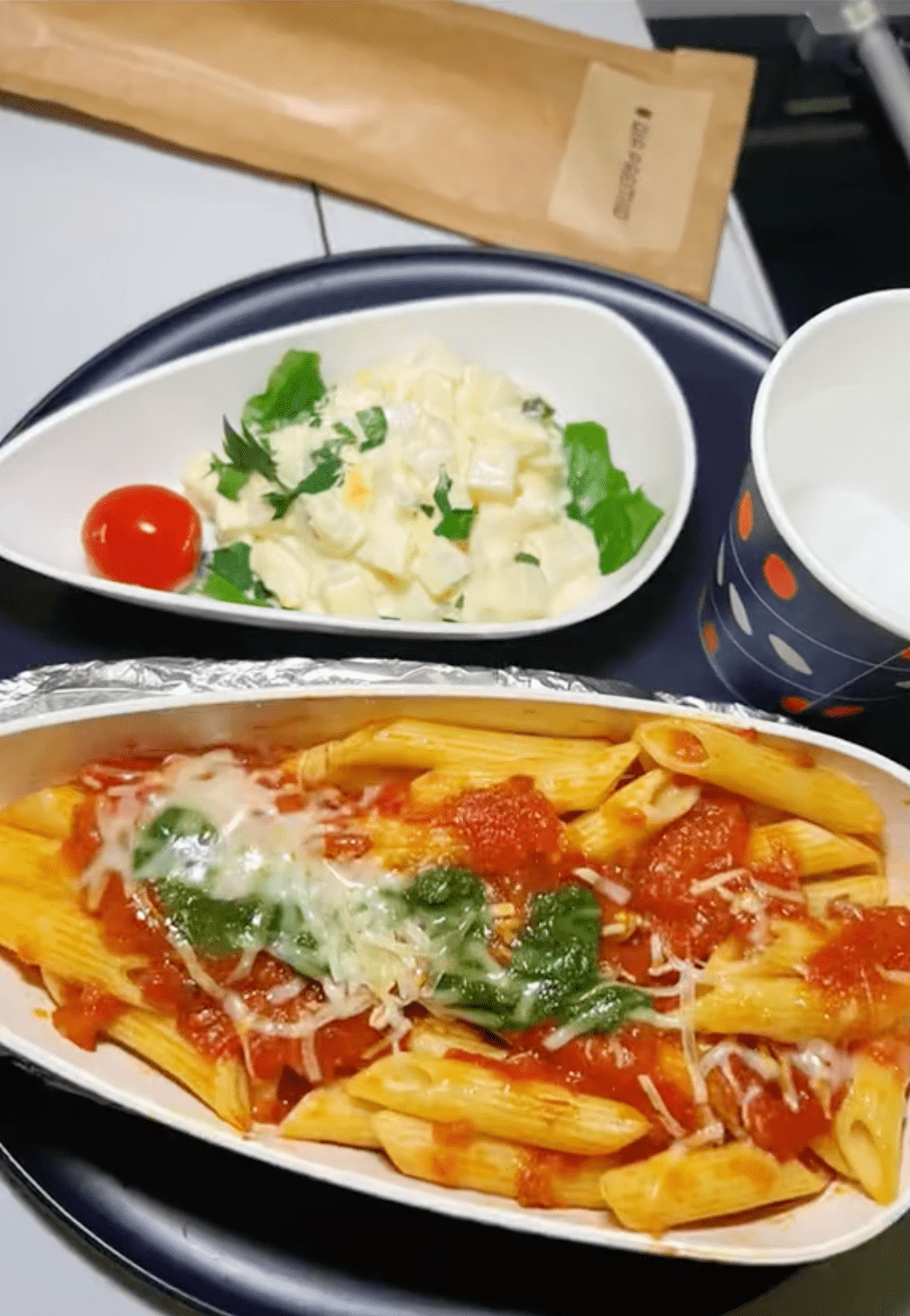 For her second meal, she got beef porridge with chicken salad. 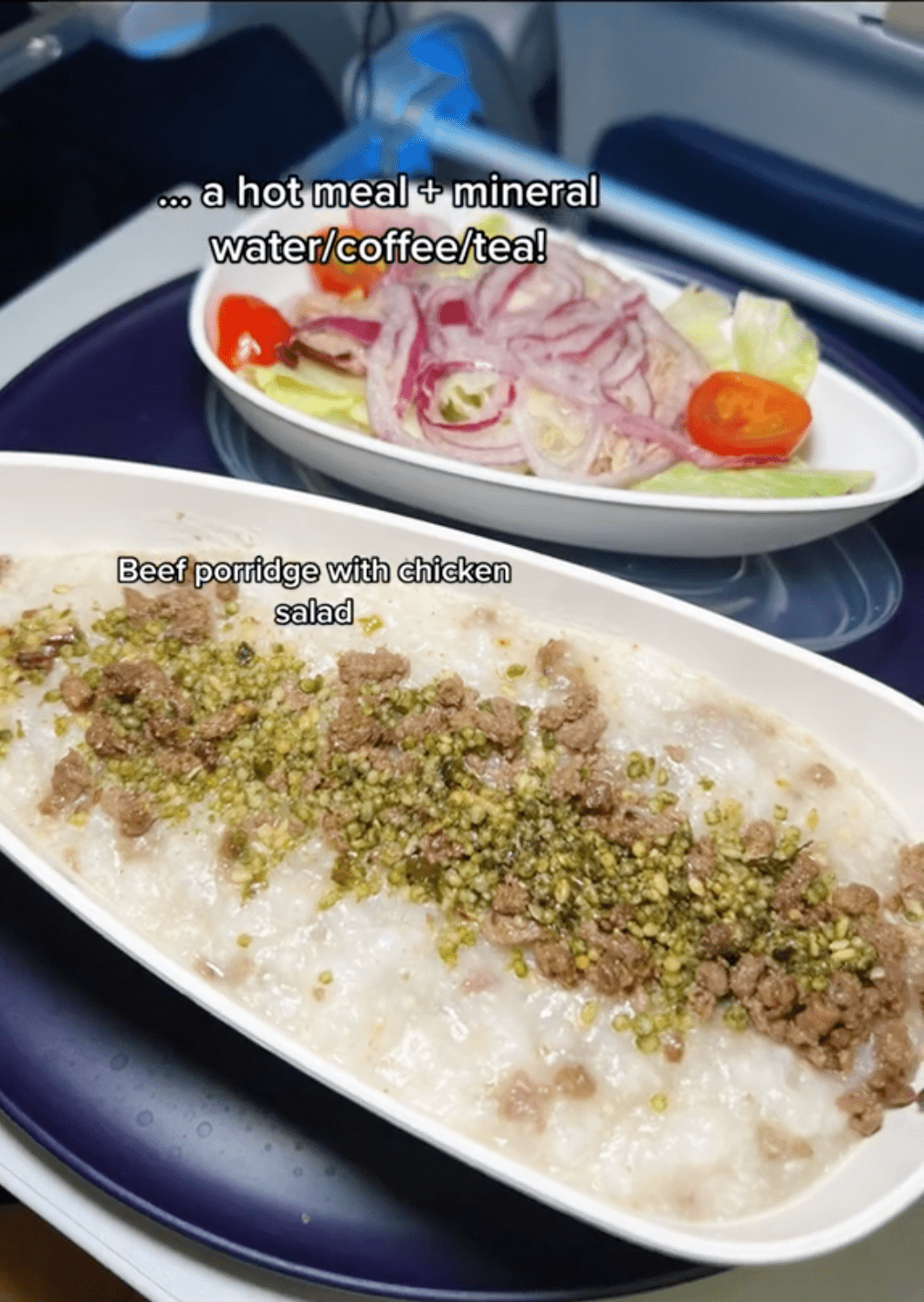 Elanor shared that the flights include a hot meal with a choice of water, coffee, or tea.

In her caption, she said she strongly recommends Air Premia to everyone. She went on to add that the planes were also new and clean.

Speaking to MS News, Elanor said the flight experience was great for her, especially at such a good price point.

She has even heard of other travellers booking Air Premia via third party platforms and scored tickets at just S$288.

Air Premia is a budget hybrid carrier based in Seoul. It was founded by Kim Jong-Chul, the former president of Jeju Air.

Netizens amazed at a value-for-money price

Seeing her video, many netizens were amazed by how the flight seemed to be extremely value for money.

Some even lamented paying high prices for their own tickets to Korea, wishing they had seen her recommendation earlier.

One viewer shared that they paid more than double her S$350 for SIA and Scoot flights. 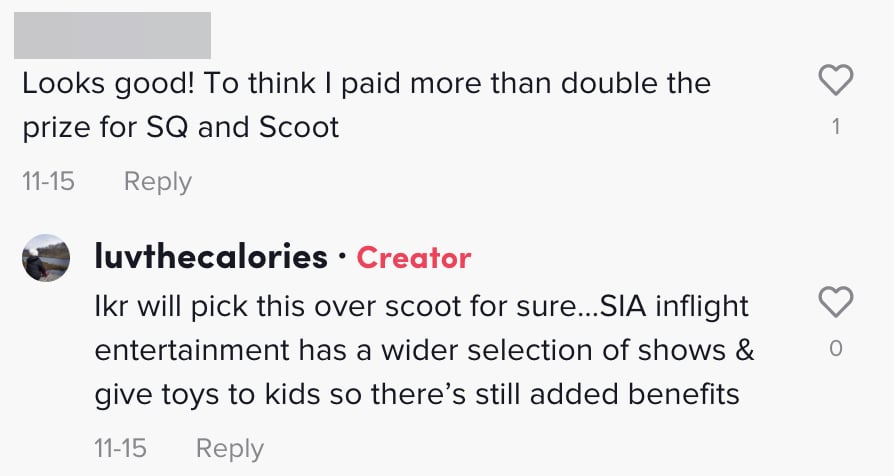 Elanor responded that she would pick Air Premia over Scoot but SIA does have its perks such as a wider selection of inflight-entertainment shows.