Some ATMs are potentially vulnerable to security breaches. One of these breaches apparently allows hackers to gain access to people’s cards when they use the ATM.

A netizen suspects that this might’ve happened at an ATM outside Boon Lay Place Market, after her card was blocked by the bank for suspicious activities.

This came after she used that particular ATM the same day.

Concerned, she made a public service announcement (PSA) on Facebook, which drew the attention of POSB. 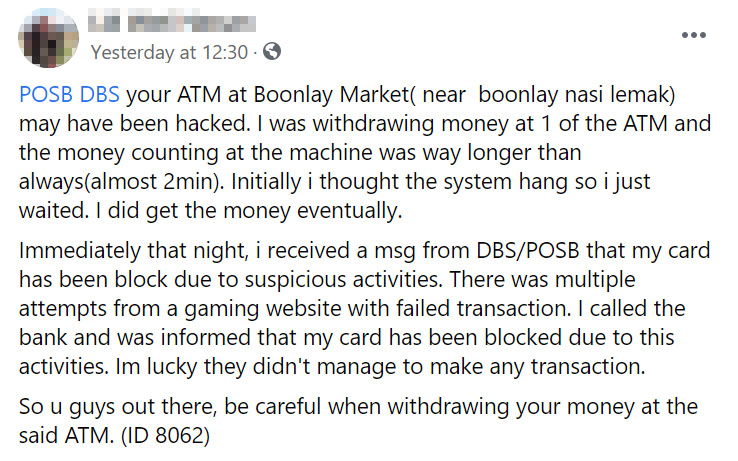 Apparently, POSB are looking into the situation, and the area around the ATM is currently cordoned off.

The netizen was using the ATM outside this particular locale on 18 Nov and noted something strange. Apparently, it was taking a long time for the machine to dispense the withdrawn money — almost 2 minutes.

But she received her money eventually so didn’t think too much about it.

However, the same night, she received a text from DBS that due to suspicious activities, they’d blocked her card.

There were several failed transactions made to a gaming website.

The netizen contacted the bank, who told her that they blocked her card because of these activities. She’s lucky that the transactions were unsuccessful. 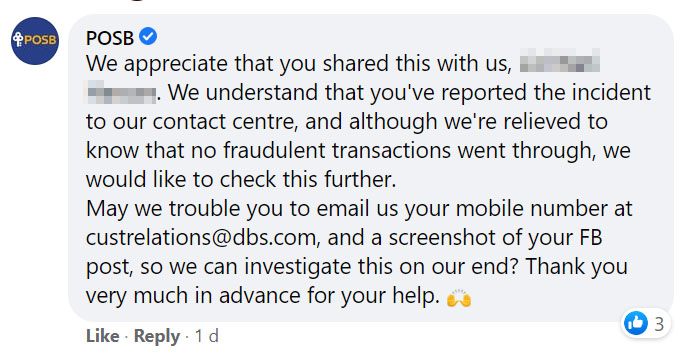 The next day, another netizen saw that the area around the ATM was cordoned off. It appears that POSB’s looking into the matter.

Lucky that transactions were caught

The netizen is indeed lucky that DBS/POSB caught the unauthorised transactions. Others may not be so lucky.

It’s definitely also potentially concerning that an ATM might’ve been breached, although this hasn’t been confirmed yet.

In any case, if you spot any suspicious transactions on your card, do contact your bank immediately.