Singapore has had to put many strict measures in place over the last few weeks and some are finding it hard to adapt.

This is especially so for the older generation, who’ve gotten used to a certain way of life.

Case in point, a local auntie was pretty insistent on eating her dabao-ed bowl of kway chap at a hawker centre in spite of new rules that dictate otherwise.

A local auntie was depicted indulging in her bowl of soup kway teow, in a viral Facebook video posted on Facebook page, Fabrications About the PAP on Monday (20 Apr).

We summarise the story after the jump.

Auntie wishes to eat her food while it’s still hot

As the video begins, we see a senior lady who’s selected a spot next to a long trail of plastic intended to cordon off the area.

She then attempts to explain in Mandarin why she doesn’t want to bring her food home to the person behind the camera.

The auntie then shares that she experiences bad back pains, resulting in her having to walk slowly. This possibly alludes to the fact that she doesn’t want her food to go cold.

Initially, people presumed to be enforcement officers tried to speak rationally to the elderly woman.

However, the auntie appears to gradually get more worked up in the video. She later exclaims that these new measures have “gone overboard” and are “bullying people” in Mandarin. 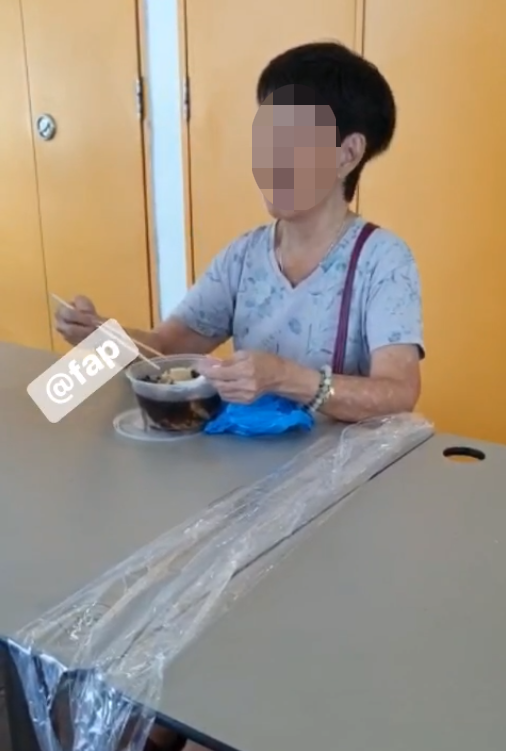 A man then steps in to tell her that she would be fined if she continued eating outside, sharing that it wasn’t “worth it”.

Facing a fair bit of continued resistance from her, the man still kept his cool and explained that the enforcement officers were just doing their job.

At one point, he even offered to help the auntie bring her food back so she could enjoy her food while it’s still hot even back home.

Singaporean’s response to the auntie

Many netizens shared their views on the social conundrum in the comments section.

Some outlined the difficulties in convincing seniors in particular, stating that penalties may serve to help them “realize the seriousness of the offence”.

However, others remained empathetic. They asked for negative commentors to be more understanding and patient with our seniors.

Many more praised the kind passerby for his willingness to go above and beyond, as succinctly put by this user.

Let’s all try to spur each other on

In these trying times, we’re impressed by the patience of this kind passerby in explaining Circuit Breaker rules to the auntie. His efforts to empathise and help our seniors is extremely commendable.

We believe that through calmly rationalising the situation to people who might have a hard time coping, we’ll be able to get more onboard with complying to social-distancing measures.

Let us all continue to press on, supporting fellow Singaporeans in whatever ways we can.