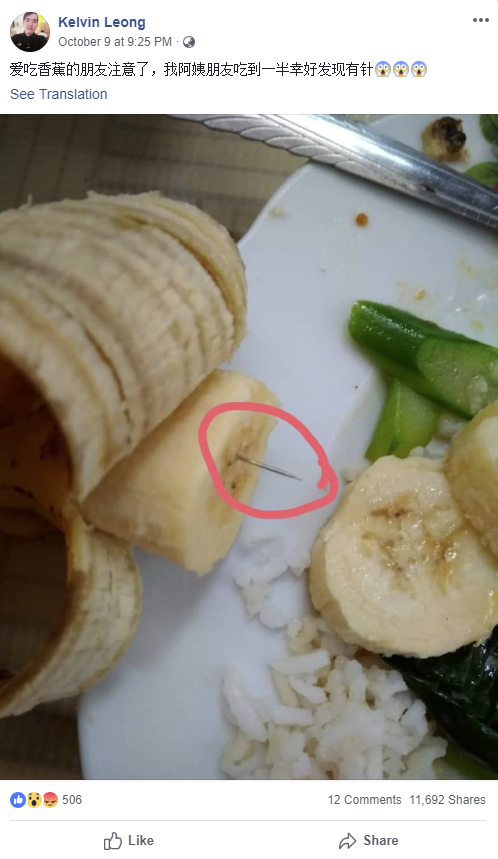 On a side note, is banana with rice a thing now?
Source

In a Facebook post, user Kelvin Leong shared a picture of a needle running right out through the middle of the banana.

According to him, a friend of his aunt had bought the banana from a market in Fettes Park, Penang.

After a few bites, she felt something pierce her tongue.

When she removed the banana from her mouth, she was horrified to find a needle sticking out of it.

Accompanying the picture was also a voice recording of a woman speaking Penang Hokkien.

She claimed that similar incidents have happened in other markets in Penang — namely, those in the suburbs Jelutong and Batu Lanchang.

He told the Malay Mail,

I have checked with both the Batu Lanchang market association and Jelutong hawkers association, they confirmed that there were no such cases.

Fearing that the picture might be a prank or a move to disrupt the businesses of fruit sellers, Mr Ong decided to file a police report. He hopes that the police will look into the matter and verify the statements accompanying the picture.

Part of a prank?

In the Australia strawberry case, a youth was arrested after admitting to hiding needles in fruits.

He thought it was a funny prank to pull.

There were other such copycat pranksters as well, but none of them have been caught.

Hopefully, this new case with the banana doesn’t reignite that incredibly foolish and dangerous idea of a prank.