A new employee had misheard the customer's name, leading to the mix-up.

Earlier this week, the owner of a seafood restaurant in Bartley filed a police report against a customer for not paying for his order.

She has now clarified that it was a misunderstanding as the man is a regular at the eatery.

He has since made a full payment, and the owner has apologised for her mistake.

Following the incident, the owner of The Morning Catch Seafood at Bartley, Ms Serena Qin, clarified the matter with 8world News.

According to her, the customer had been in a rush and informed the employee billing his order that he would return later to pay the full amount of $334.50.

The employee was a new hire and had misheard his name as Jia instead of Jiang. 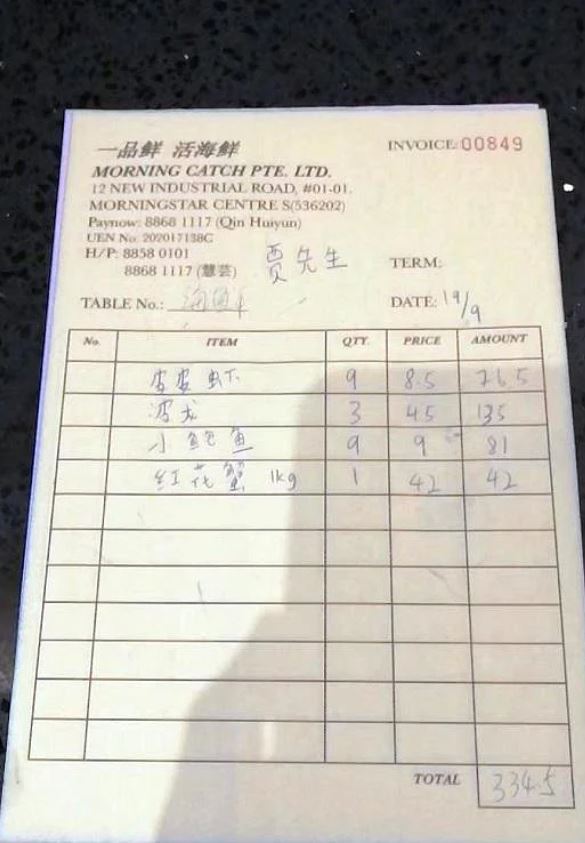 The customer apparently knew Ms Qin and thus did not leave his contact information behind. He was familiar with all of the staff at the eatery except for the new hire.

When the employee informed Ms Qin of the incident, she did not recognise the name given.

According to 8world News, Ms Qin asked around to try and find the customer three days later.

Her husband, Mr Desmond Lim, also helped with the search by uploading the bill and car plate number to Facebook. The restaurant subsequently filed a police report after five days went with no payment.

Offended by the matter, Mr Jiang allegedly posted a complaint to social media on 28 Sep which was brought to Ms Qin’s attention.

She told 8world News that the incident made Mr Jiang rather upset, which she empathised with. She has apologised for the misunderstanding, especially since they were both “really familiar with each other”.

Mr Jiang has since paid the full amount for the order to the eatery.