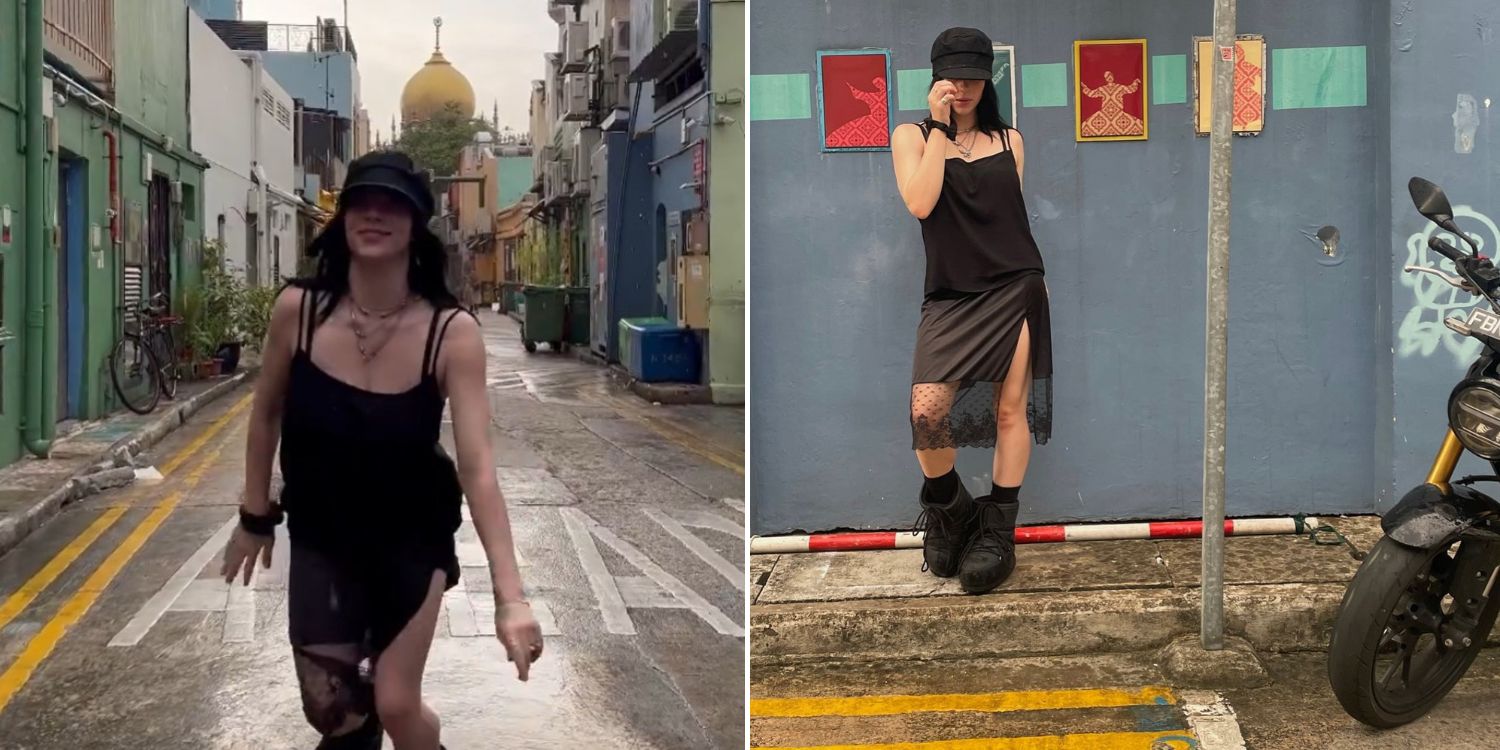 The 20-year-old is the youngest person to headline a concert at the National Stadium.

When it was announced that American pop star Billie Eilish was holding a concert in Singapore, fans were excited to listen to her popular tunes “live”.

However, another thrill is getting to see an international celebrity chilling out at places familiar to us.

That’s why fans were understandably pumped when she shared photos of herself in Kampong Glam.

She even posed for a quick video in front of the imposing Sultan Mosque. 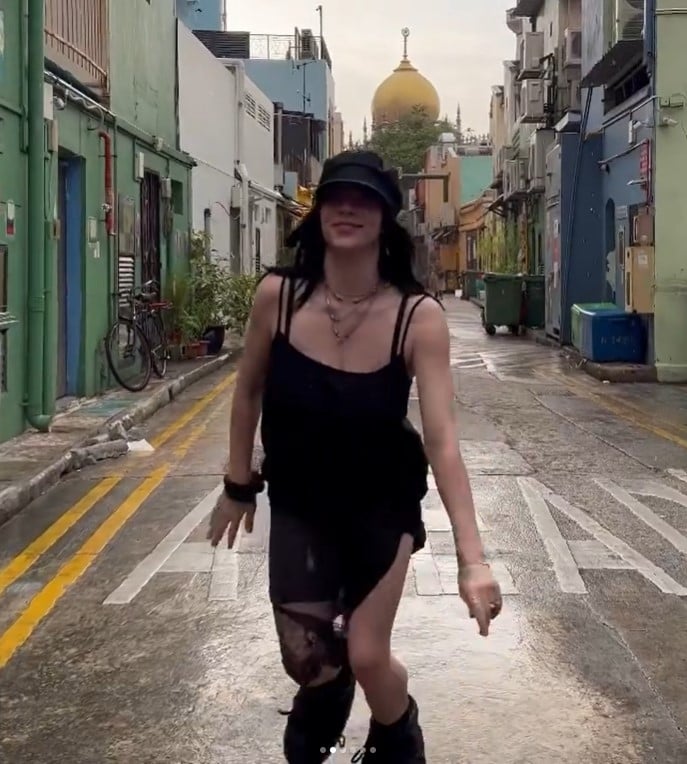 On Monday (22 Aug), the day after her concert, Eilish shared a few random photos on her Instagram account.

The first one seemed to be taken at a back alley in the Kampong Glam heritage district.

She struck a pose in a chic black dress and cap in the photo. 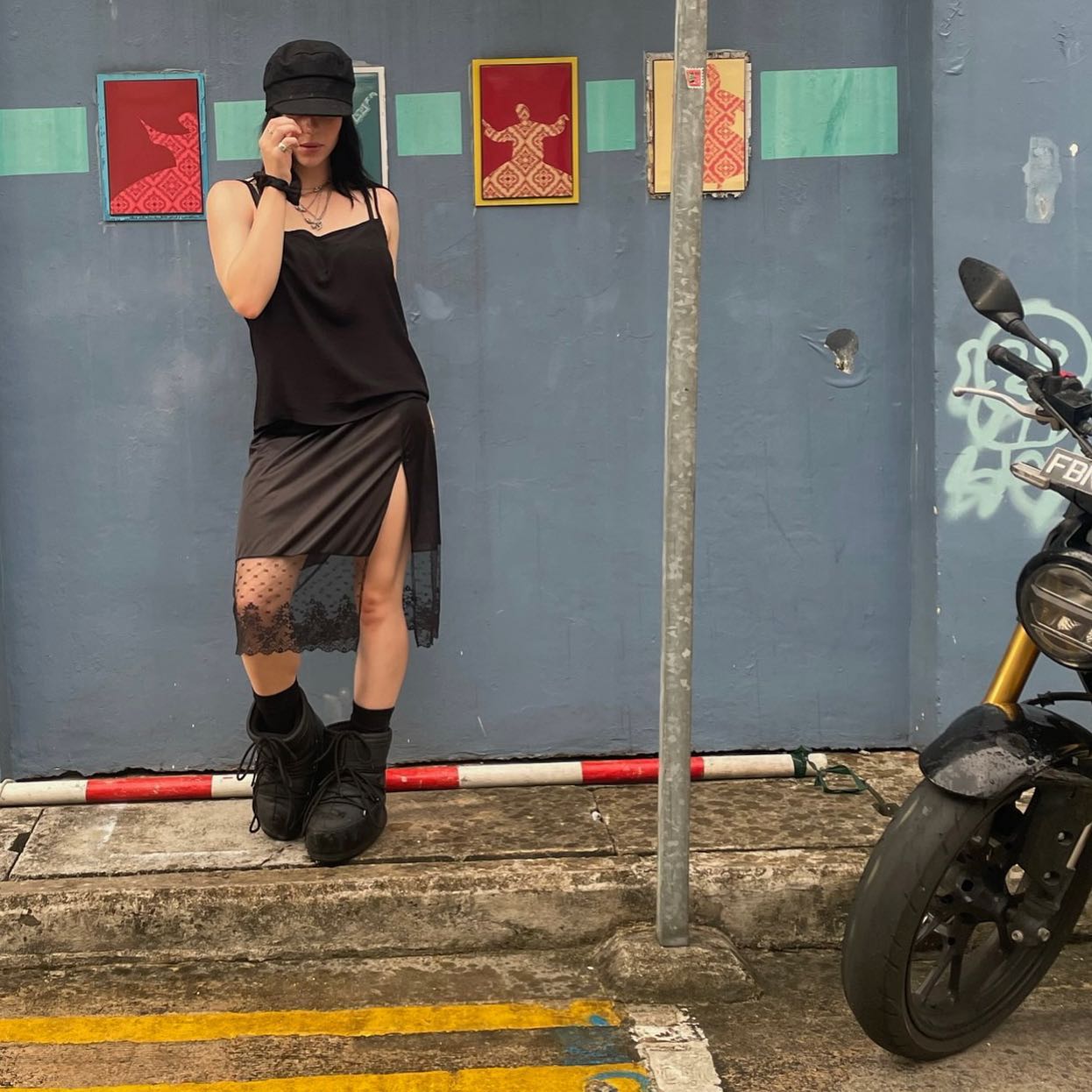 While the outfit was casual, her attitude and pose definitely put the “glam” back in Kampong Glam.

The photo was captioned, “a lot can change in twenty seconds” — a lyric from one of her songs.

Eilish’s next photo was a short video of herself in the back alley amid a slight drizzle, with her head turned to gaze at the Sultan Mosque — the area’s highlight.

The prominent landmark, which has a history dating back to 1824, can be recognised by its gleaming golden dome. 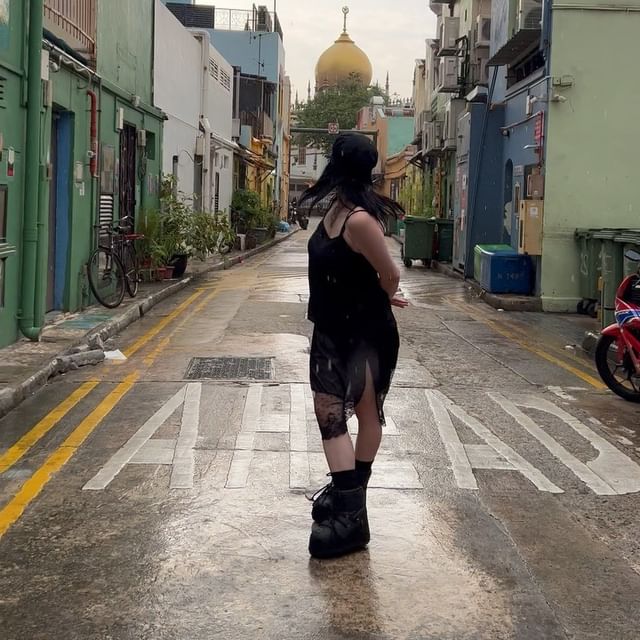 She then turns and rushes to grab her camera.

The third photo Eilish posted was of herself swimming in the pool of the Sofitel Singapore City Centre.

The luxury hotel has a magnificent view of the Pinnacle@Duxton. 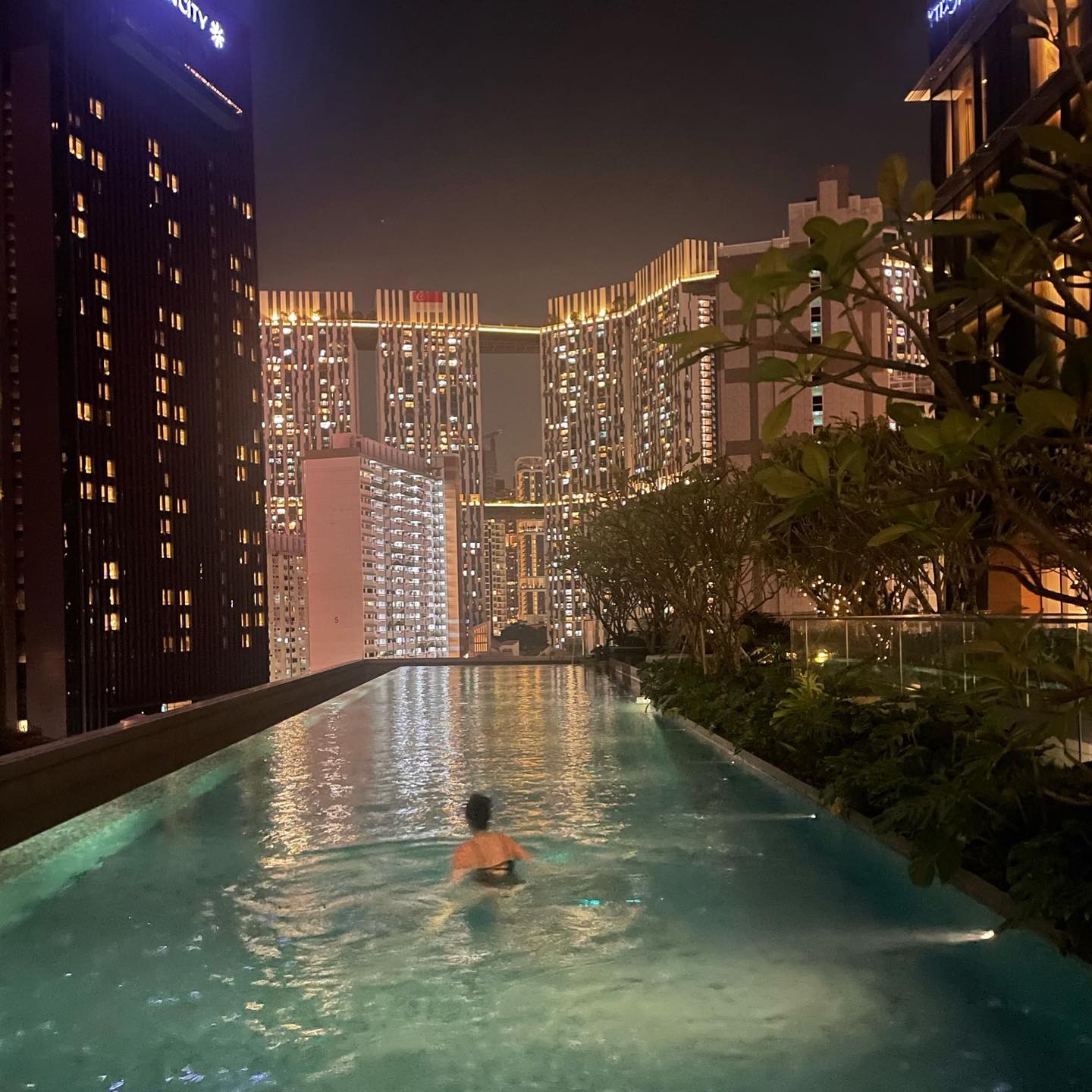 It’s clear that Eilish was impressed, too.

Her subsequent photos were even more random, featuring feet in a lift, herself go-karting in Kuala Lumpur, and taking a selfie at an unspecified location. 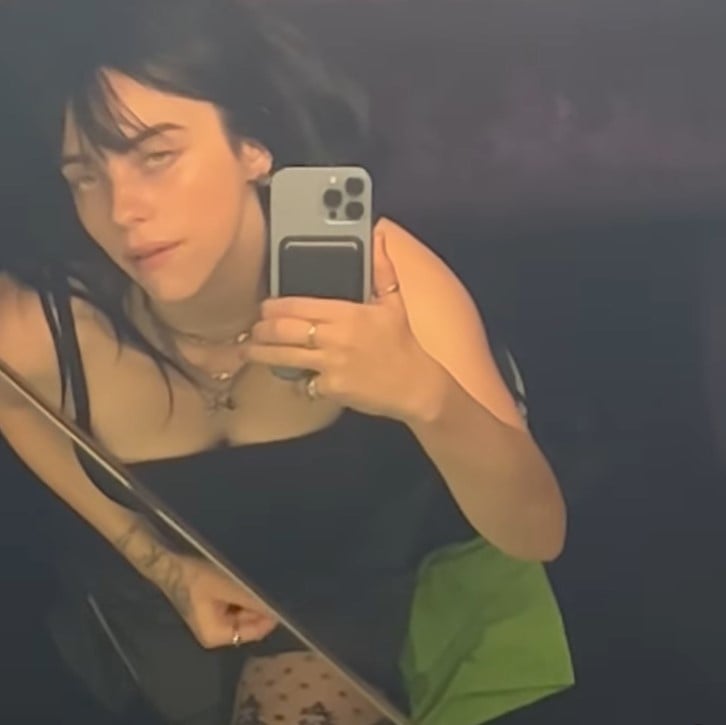 The night before, on Sunday (21 Aug), Eilish performed at the Singapore National Stadium in front of 30,000 adoring fans. According to The Straits Times (ST), the 20-year-old became the youngest person ever to headline a concert at the venue.

This was also the first concert held at the National Stadium since the pandemic.

The previous concert there was Jay Chou’s in Jan 2020.

However, her Happier Than Ever tour in Singapore wasn’t without hitches.

One TikTok user complained that her view was partially obstructed, and there was no indication of this on her ticket.

While she’d paid for a S$130 ticket at extreme stage left in the cheapest category, she didn’t expect the stage to be covered at the sides, so she couldn’t see at all. 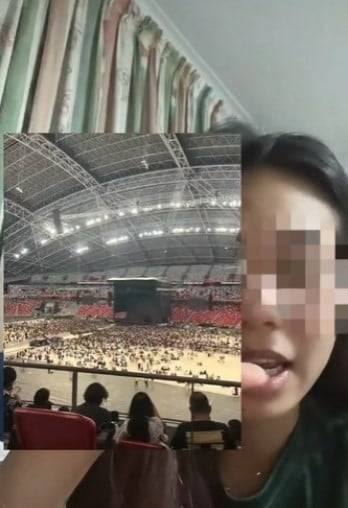 She later said the distance between the standing and seated sections was too great.

Her TikTok video was captioned, “I was literally depressed on the way home”.

Another TikToker also said they “didn’t expect” to be this far from the action. 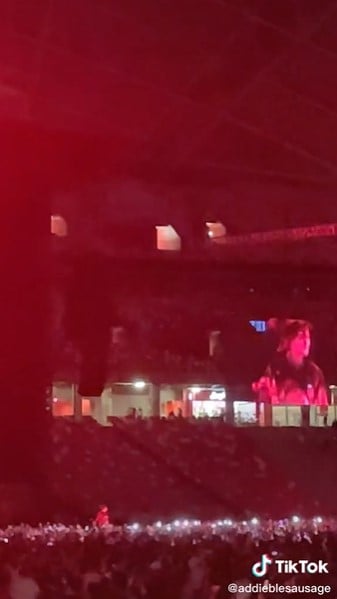 Many faint during concert

More alarmingly, there were also reports of fans fainting during the concert.

A seated fan noted that Eilish had called for security in the middle of a song and wanted to know why. 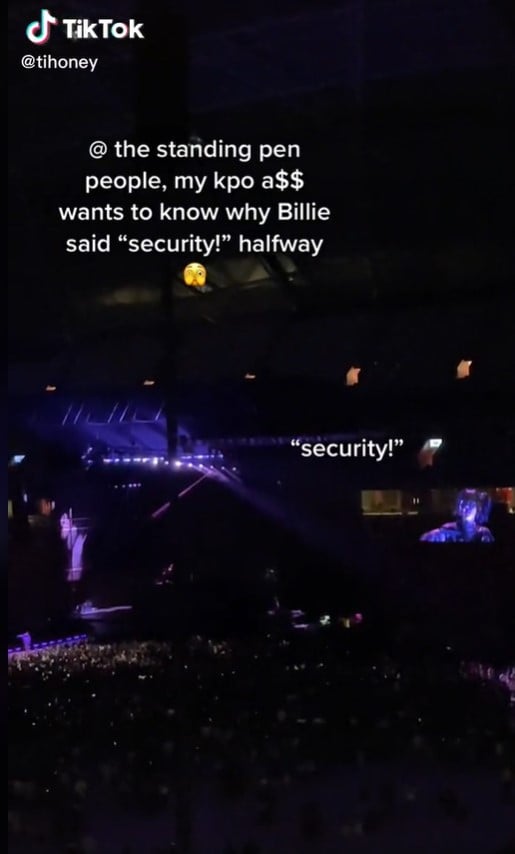 Netizens replied that the singer was alerting security to people fainting in the crowd.

Apparently, there were so many people fainting that paramedics had to squeeze through to render assistance.

The concertgoers who fainted were in the standing pens, possibly because the thick crowd made it difficult to breathe.

On the bright side, one commenter said it was sweet that fans were looking out for each other, ready to help when someone fainted.

Another TikToker shared a video from the standing pen showing what happened when somebody fainted. Those around were heard shouting “help” and “stop” to alert Eilish of the incident. 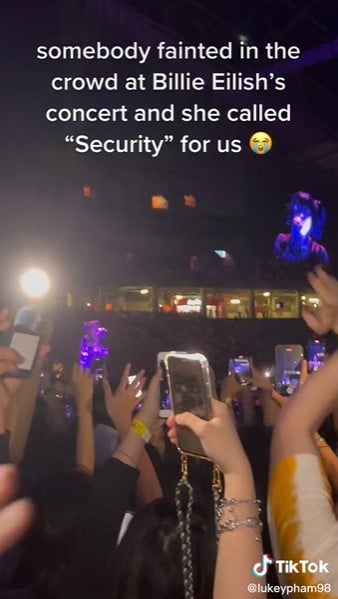 Their intervention would probably have caught the artiste’s attention, who was in the best position to call for security.

Happier Than Ever to see Billie Eilish at Kampong Glam

Thanks to the easing of restrictions, international celebrities gracing Singapore will be a common sight again.

However, that doesn’t mean fans aren’t Happier Than Ever to see them popping up at our favourite haunts.

If you were fortunate enough to get a sighting of Eilish or any other stars, do share it with us in the comments below.