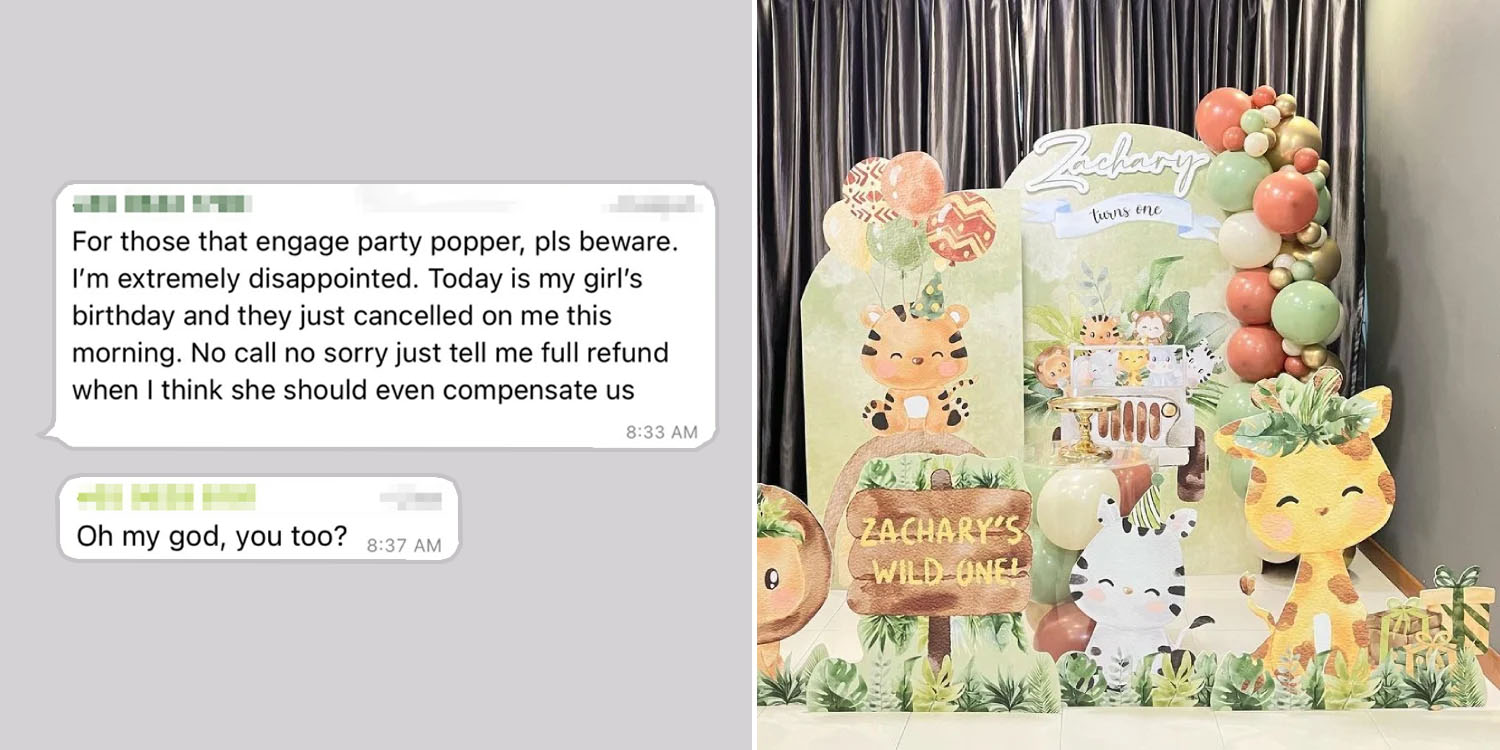 She'd promised to show up but never did.

A child’s first birthday is a huge milestone for any parent. It is a celebration that’s particularly meaningful considering how difficult the first year after a child is born can be.

This was even though they’d made advance payments to the vendor.

After some parents got in touch through group chats and Facebook groups, they realised that the vendor had promised but not delivered on multiple occasions.

Eric told MS News that on 12 Aug, he engaged the vendor, thepartypoppers.sg on Instagram for his son’s first birthday celebration — an event with over 100 guests. He booked a birthday backdrop set that cost S$850. When they asked for an advance payment, Eric duly sent it to her.

However, he noted that the vendor, a young girl who claimed she was a ‘one-man show’, had to be chased multiple times before the event and often had delayed responses.

Then, at 9am on 4 Sep, the day of the event, she texted saying she had stomach pain and had to visit the hospital.

Even though she promised that she would send over the backdrop and garland at 11am and come to set them up when she felt better, she never showed up all day. Nor did the backdrop arrive.

This was even though Eric and his wife texted her multiple times, and she would reply that she was ‘on her way’. Eventually, at 4pm she texted that she was still at the hospital.

In the end, Eric had to scramble for another decoration off the shelf. He also had to chase her multiple times over the next two days before she eventually gave him a full refund.

“Can (you) imagine how devasting it is for us? It was my son’s first birthday.” he lamented.

After digging deeper into the vendor online, Eric found out other parents had similar experiences with The Party Poppers.

Like Eric, other parents had also found that The Party Poppers vendor would either disappear on the day of the event or abruptly cancel, even though the customers made the full payment.

Items would either not be sent on time or would be the wrong colour or type, according to a review on Facebook group SG Mommies. 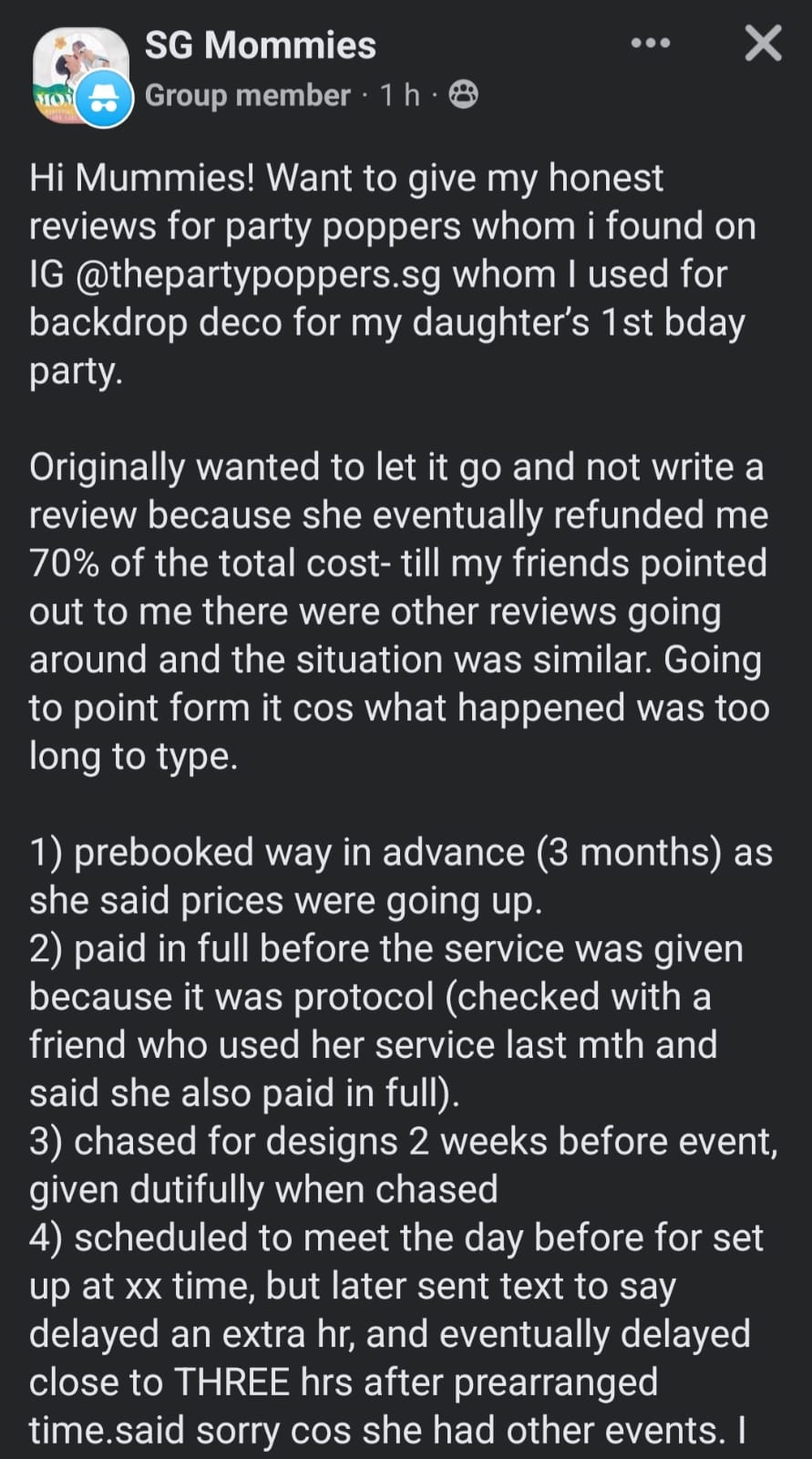 An excerpt of a review shared on SG Mommies

Although some parents received part of their refunds, the day was still ruined for them because of the no-shows and poor service.

One parent eventually received a 70% refund after three days, but had to wait as the vendor claimed that other payments had to come in first.

Other parents conjectured that the vendor might have taken on too many jobs and so couldn’t fulfil them all. 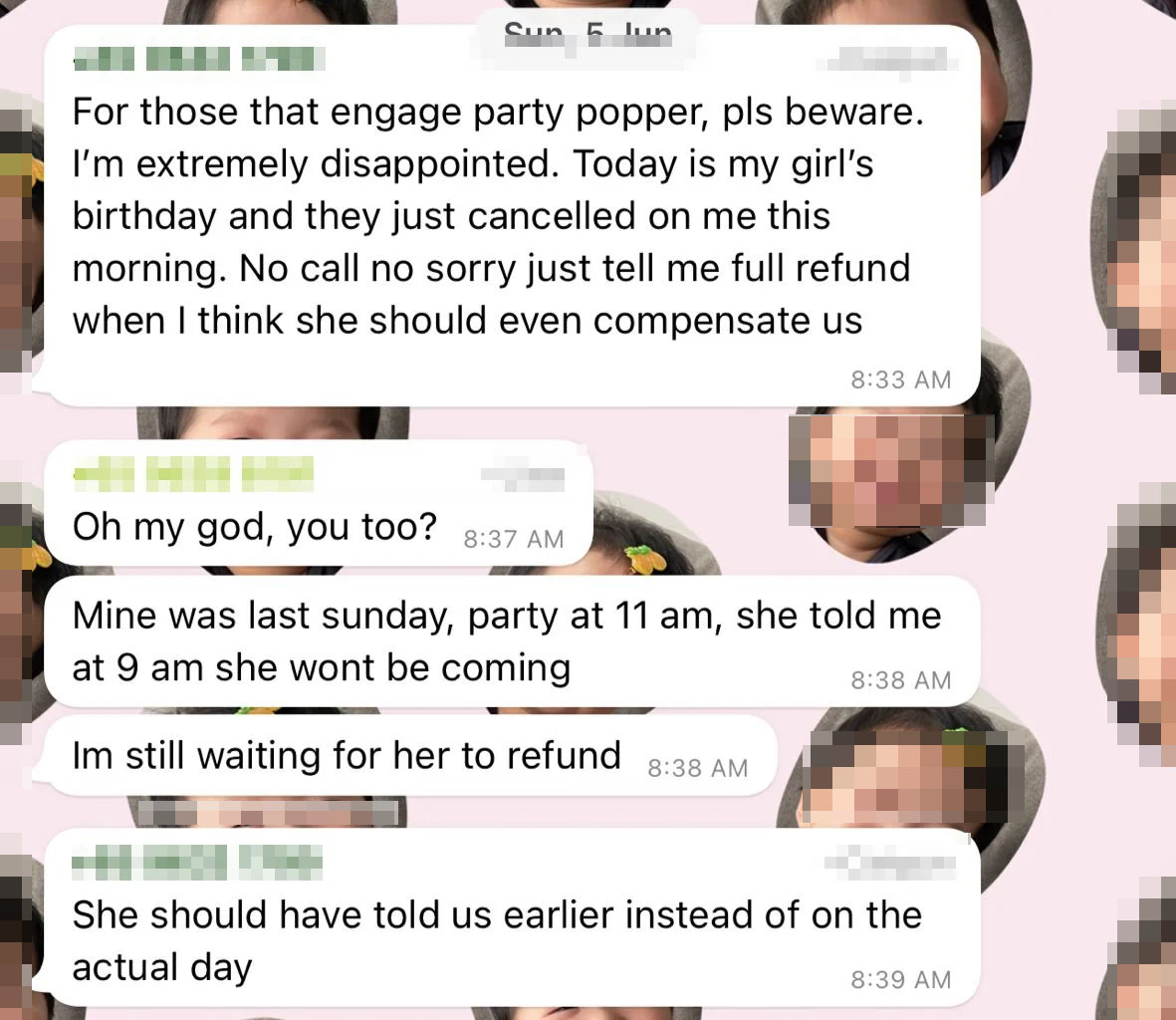 A group chat of parents who also faced the same issue.
Image courtesy of Eric

Eric said that he had made a police report. The police have since interviewed him on one occasion, and he’s awaiting updates from them.

MS News reached out to The Party Poppers on multiple occasions but did not receive a response.

The latest updates on the page are also dated around June, with no subsequent updates or stories since. Prior to this, there were many posts of various party backdrops, purportedly prepared by the vendor.

Comments have also been disabled and limited on the posts.

Eric, whose number has apparently been blocked by the vendor, shared his story so that other parents won’t have to go through what he did — he does not expect to receive a refund despite the no-show.

Although there might be a chance for her to create another IG account and change her number again to restart what she’s doing, but it feels like I still need to send out a warning to… parents out there.

“It is not about the refund too, how is she going to compensate us for (this) important day of our lives?” Eric told MS News.

Featured image courtesy of Eric and adapted from The Party Poppers.