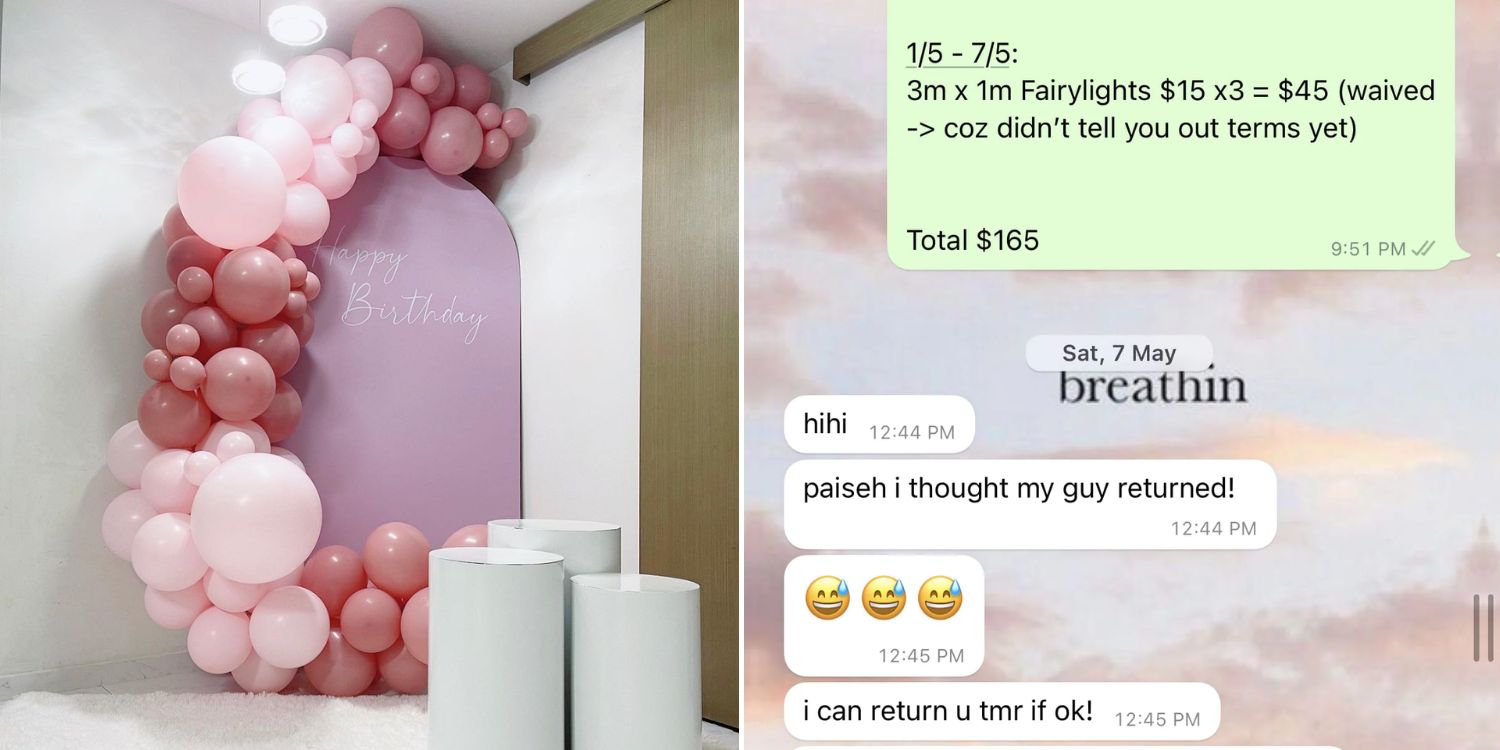 After news broke that birthday backdrop vendor The Party Poppers would suddenly go MIA before client events, a vendor who rented props to them has emerged with more damning allegations.

According to event decor company Style It Simply, The Party Poppers owes them more than S$2,000 in prop rental fees, as well as several items that they have yet to return.

Despite promising to return the items, The Party Poppers failed to do so and has even indefinitely delayed payments.

Style It Simply called their actions a “disgrace” to the events decor community. They have also expressed concern about customers potentially distrusting other decor companies.

The two vendors’ business relationship began early this year, with The Party Poppers renting props from Style It Simply.

“At the initial stage, she (The Party Poppers) would still return the items and make payment afterwards,” said Style It Simply owner Julina.

She noted that there were times The Party Poppers would make the payment later than agreed, but this was not an issue. At least not in the beginning.

The Party Poppers would also rent items either on the day of the event or the night before.

Although these were last-minute requests, Ms Julina tried to accommodate them without demanding any advance payments.

But beginning in April, things took a turn.

After several delays in returning borrowed items, The Party Poppers claimed that her vehicle was involved in an accident. The items were never returned.

During one instance, The Party Poppers borrowed several items including fairy lights, a stand, and a gold arch. However, she failed to return them after the event.

After Ms Julina asked for the items as well as payment, The Party Poppers asked if she could return them “after this weekend” as she allegedly needed to use them again.

A consistent trend in these conversations shows her making promises but not delivering on them.

Sure enough, she did not return the items and replied two days later on 7 May after a chaser. She then promised to return them the next day.

The alleged arrangement was that The Party Poppers would send someone over to return the items.

However, this driver never turned up, and the items were still missing.

At the same time, The Party Poppers asked to rent more items despite having not returned or paid for the previous ones.

She also claimed that she had returned four sashes, but Ms Julina never received them.

By this time, The Party Poppers owed Style It Simply S$310.

Stopped responding to messages after

A month later, after renting even more items but not paying for her outstanding loans, the bill came up to S$1,218.

After sending yet another chaser on 13 Jun, Ms Julina sent the following message: “You can return the items that are not in use to avoid incurring extra rental costs.”

However, these messages went unresponded. Regardless, Ms Julina continued to send reminders until 22 Jun, when The Party Poppers finally replied — again promising to send the payment “tonight”.

Once again, she never sent over the money, citing personal issues.

This pattern of chasers and general unresponsiveness would continue until 6 Jul when Ms Julina, her patience having worn thin, sent a long message to The Party Poppers.

But despite several more promises, The Party Poppers never returned the items or made any further payments.

She finally stopped replying, seemingly for good, on 3 Aug.

The vendor now owes Style It Simply over S$2,000, according to Ms Julina, but she has stopped counting the exact amount as The Party Poppers has completely ghosted her.

Meanwhile, during this period, it appeared that The Party Poppers was still providing services for clients.

A family MS News spoke to said that they had engaged her services on 12 Aug, but she failed to turn up with the promised items.

She eventually made a full refund to the family. However, numerous others have noticed her pattern of making promises and then failing to fulfil them despite asking for advance payments.

A question one might ask is why Style It Simply would continue to lend items despite knowing that they were owed payments and items.

Ms Julina told MS News that she continued to lend items to The Party Poppers because she knew the props were needed for someone’s big day.

As someone who’s worked for three years in the industry, she has also experienced shortages of certain props several times.

“I’ll be very grateful if I’m able to rent it from other vendors last minute to fulfil what we promised,” she explained.

As such, it was difficult for her to reject her last-minute requests. Regardless, she still considers The Party Poppers’ actions to be a disgrace to the community.

Ms Julina is also concerned about the effects her actions will have on customers.

Although she never made any report, Ms Julina believes the money The Party Poppers owes or hasn’t returned will be lost in one way or another.

Amount owed to others unclear

While police confirmed that they are investigating the case, there have been no updates as of the time of writing.

The scale of how much The Party Poppers owes both clients and businesses is also unclear since there may be untold numbers of others affected by her actions.

Hopefully, there will eventually be some resolution to these cases.

Featured image adapted from @thepartypoppers.sg on Instagram and courtesy of Style It Simply.