The boy had video called his mother on the day of the incident.

Earlier this week, three-year-old boy Li Shijie (transliterated from Chinese) was found dead in a house in Johor Bahru. He was suspected to have died from abuse by his father’s friend and domestic helper, who were apparently taking care of him and his younger brother.

The boy’s funeral was held two days later on Wednesday (5 Oct), with about 50 relatives in attendance. There, the boy’s one-year-old brother, who escaped unharmed, was seen crying and hugging his father. 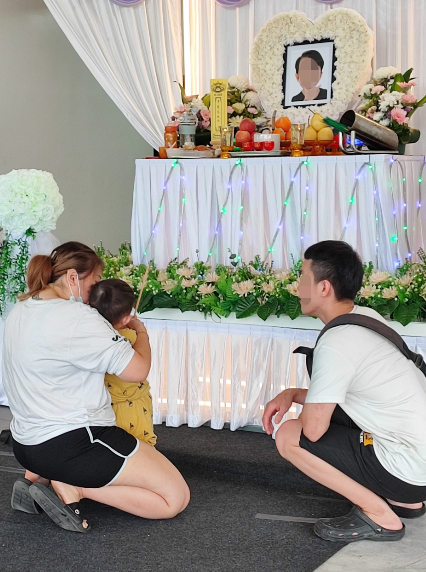 It was also reported that the deceased had apparently complained to his mother about being abused. However, the caregiver allegedly denied such claims when confronted.

According to Shin Min Daily News, the victim’s mother shared that Shijie had complained of being “beaten” by his caregiver.

However, when she confronted the helper, she denied abusing the boy.

After meeting Shijie in person on 18 Sep, the mother decided to continuously keep in touch with him via video call as she was working.

On the day of the incident, the three-year-old had apparently complained of dizziness while in the toilet.

According to reports, Shijie had suffered facial injuries while his brother had visible scars on his hands and feet.

His father added that the younger brother would undergo further medical checkups to cooperate with the ongoing investigations.

27-year-old Li Jinhe – the boys’ father, reportedly works in Singapore while his wife worked in Yong Peng, Johor. The parents hence needed to engage a caregiver for their children for at least three months.

Subsequently, both Shijie and his Zhijie were left in the care of Jinhe’s friend and domestic helper, reports Malay Mail.