One of the Carousellers said they bought a new fridge just to store 500kg of chicken.

Carousell is a place where users can discover all kinds of interesting items and sometimes score a bargain if they’re lucky.

However, it’s also a prime location for scalpers to conduct unscrupulous activities.

Before long, listings for chicken started popping up on Carousell at ridiculously high markups. However, it’s highly likely they are troll posts.

On 23 May, Malaysian Prime Minister Ismail Sabri Yaakob said there would be a short-term ban on the export of chickens from 1 Jun.

This is to address rising prices and supply issues in the country.

As a result, Singaporeans panicked and began emptying supermarket shelves of fresh chicken. This surge in demand likely gave some cheeky Carousell users the idea to put up listings at ridiculously high prices. 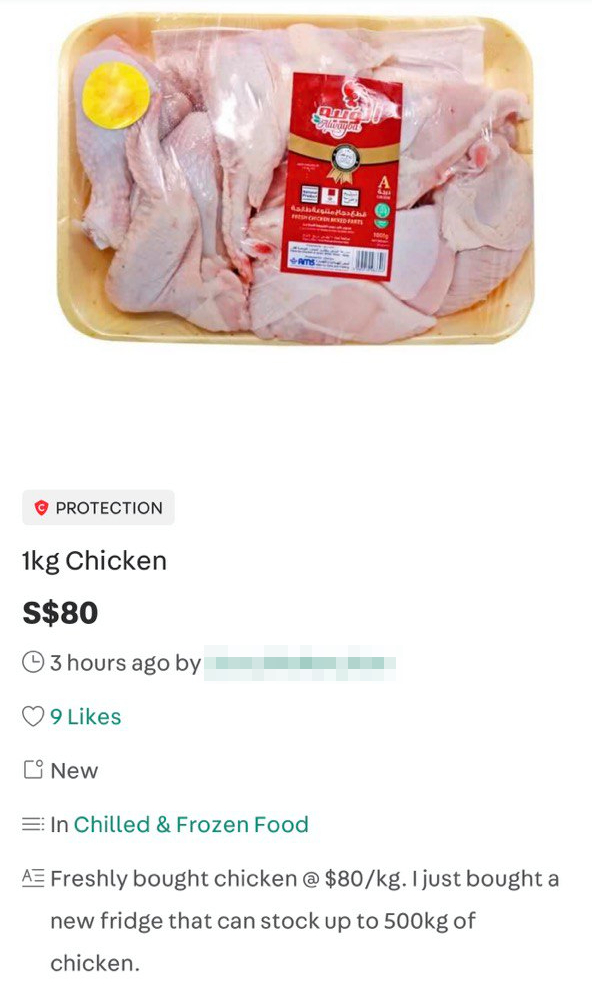 One seller put up the above listing for “freshly bought chicken” and is charging S$80 per kg.

They also claim to have “a new fridge that can stock up to 500kg of chicken”, hinting at ample supply. Another user has Singapore’s “last plate” of “Limited Edition Chicken Rice” up for grabs.

This one will set you back a whopping S$1,510. It was originally priced at S$120, but the seller appears to be anticipating high demand as the ban date draws nearer and supermarket fridges get emptier.

Jokes aside, it’s pretty obvious that these sellers are just trolling and parodying actual scalpers’ listings whenever something sought-after comes up.

Several Redditors pointed this out when someone posted a screenshot of the S$80 chicken and raged about how “speechless” they are.

One said that regardless of the authenticity, nobody is going to feel comfortable purchasing “raw meat from some unknown bugger” on the internet.

The seller’s claim about that massive fridge was also called into question.

While these Carousellers were simply trying to be funny, snapping up items before peddling them at exorbitant rates is a very real problem in Singapore.

Let’s hope that dishonest characters don’t get any ideas about trying to operate their own side biz reselling chicken — or fish.

Should that happen, hopefully, people will be wise enough not to fall for such scams.