Omega-Swatch Watches Resold For Over $4,000 On Carousell, Users Point Out They’re Not Limited Edition 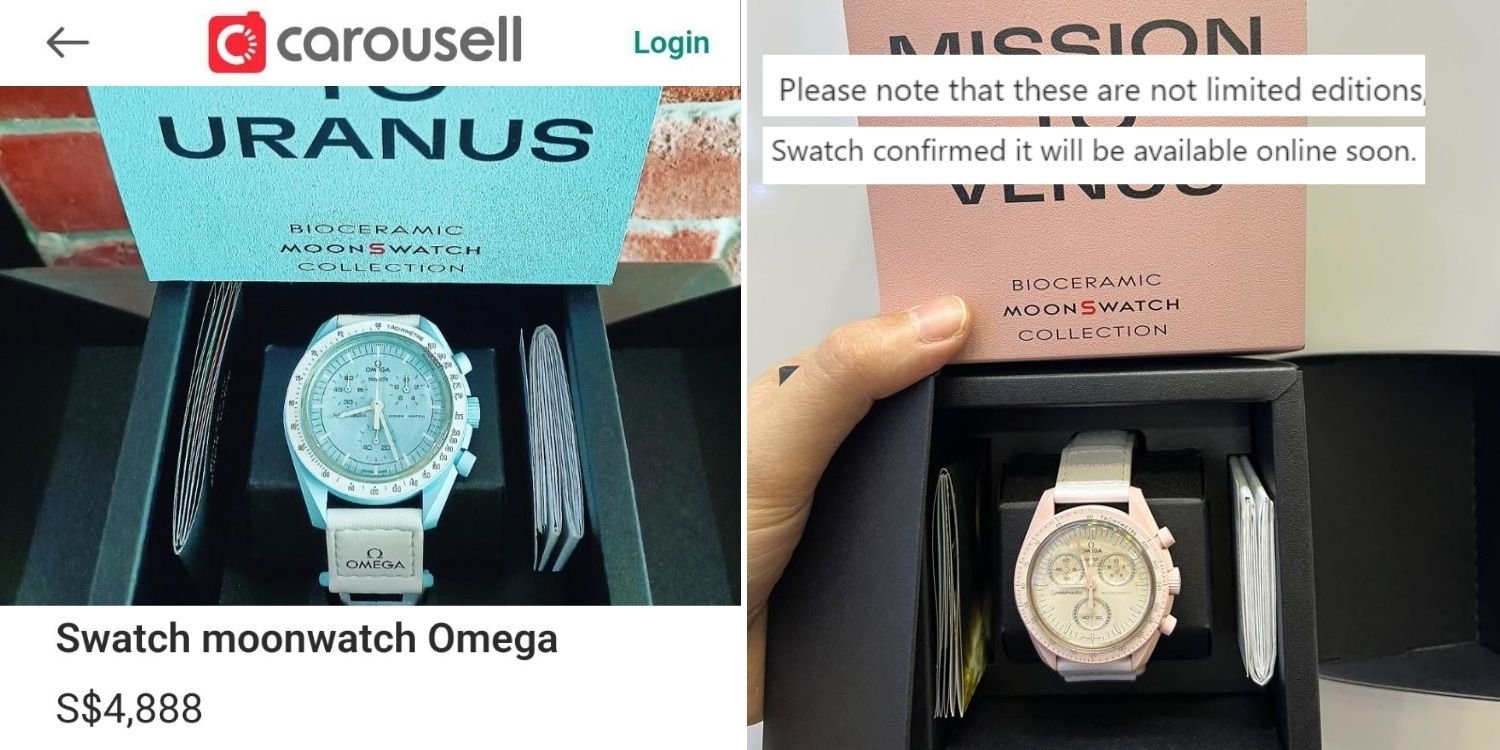 Swatch will apparently be restocking them soon.

On Saturday (26 Mar) morning, long queues formed at Marina Bay Sands (MBS) and ION Orchard comprising customers eager to get their hands on coveted timepieces from the MoonSwatch collection — a collaboration between Omega and Swatch.

While many of us would probably cherish items that we spent hours queueing for, some of the MoonSwatch watches somehow found their way onto Carousell shortly after buyers snatched them up.

Even though the watches retailed for S$372 each, some scalpers have listed theirs for up to S$2,000 — more than five times the retail price. 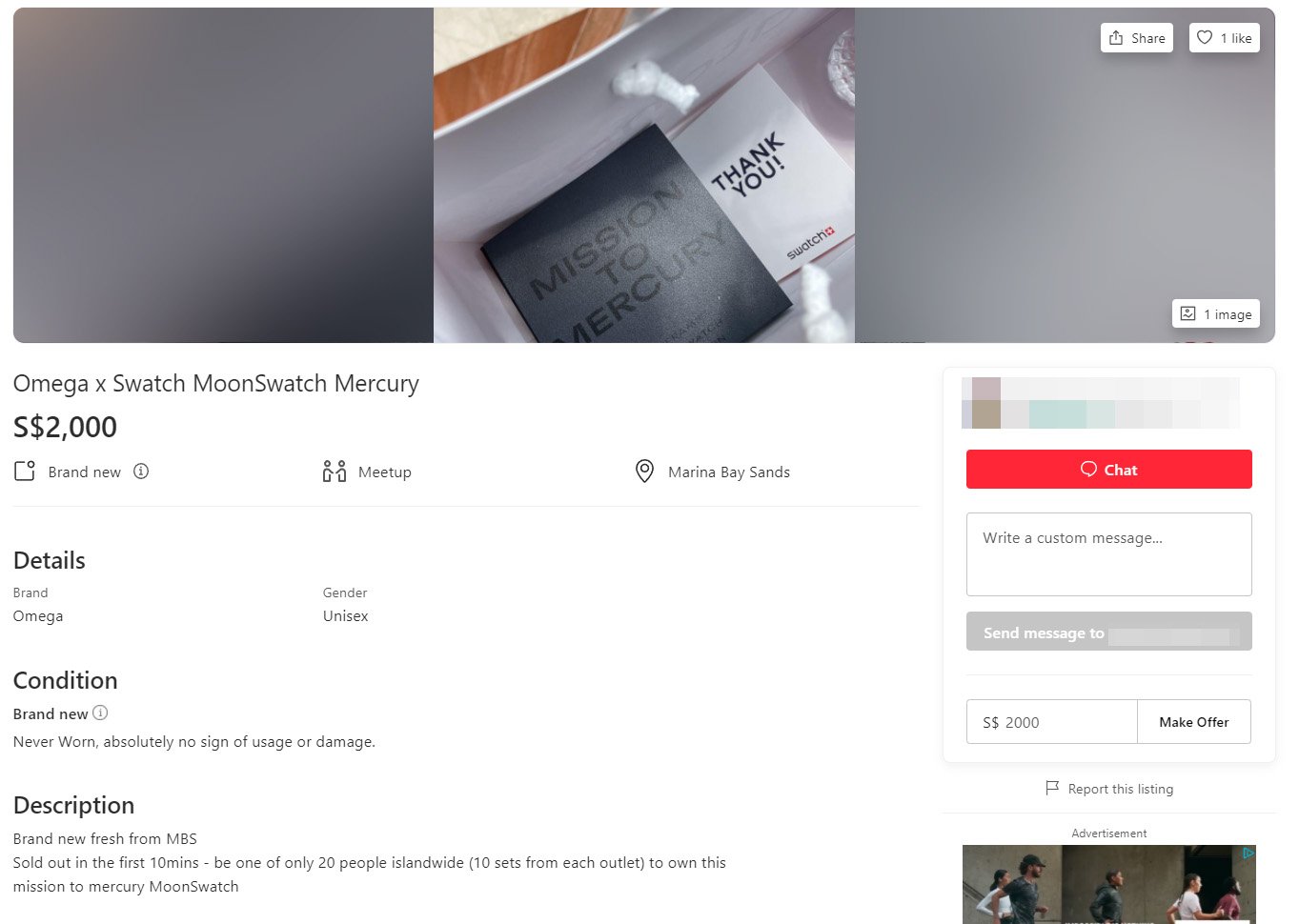 However, other Carousell users have gone the extra mile to inform prospective buyers that the watches are not limited edition.

Instead of rushing to buy them now, they should wait for more opportunities to get them from the OG stores in the near future.

Watches from the MoonSwatch collaboration were arguably the most sought after timepieces on Saturday (26 Mar).

However, shortly after they became available in stores, many were resold on Carousell at a premium. 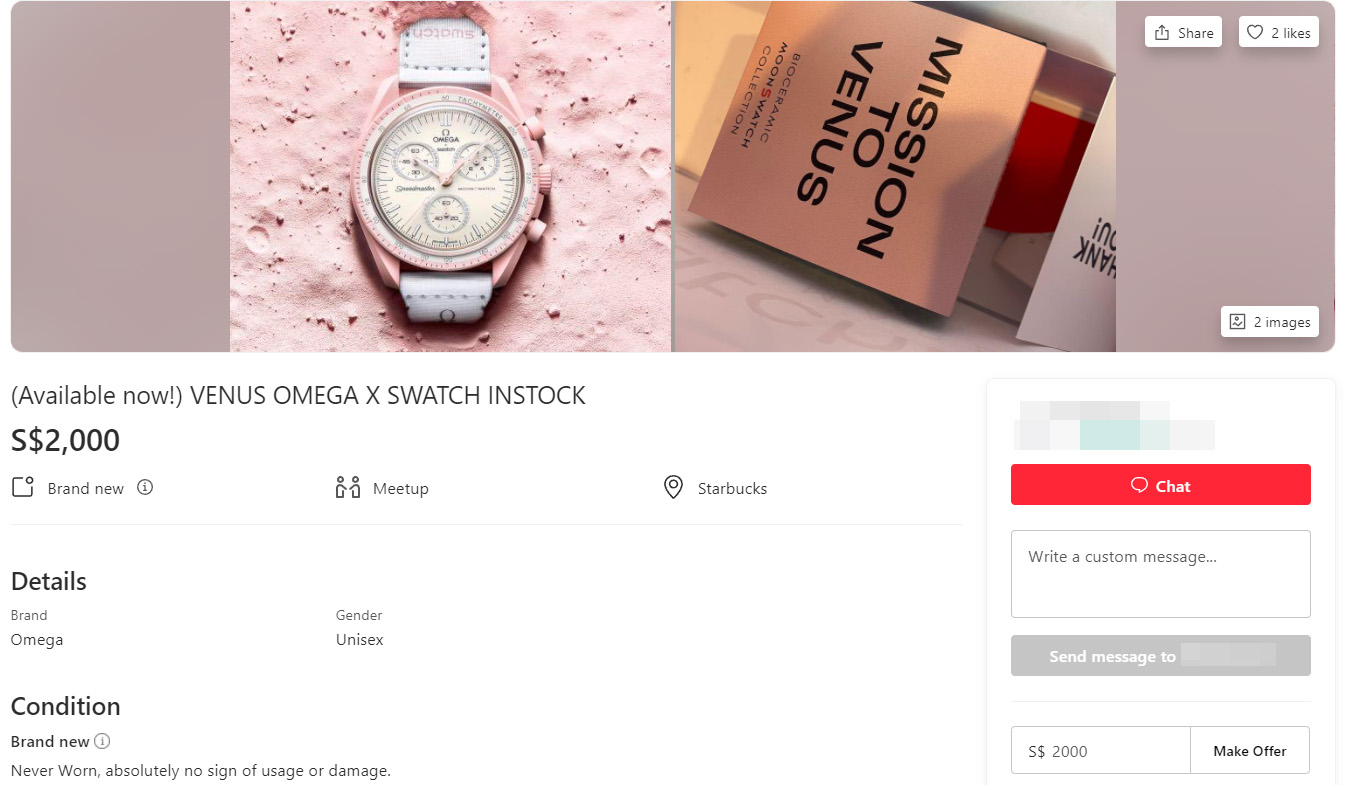 Another user went even further by listing the ‘Mission to Uranus’ piece for a whopping S$4,888. 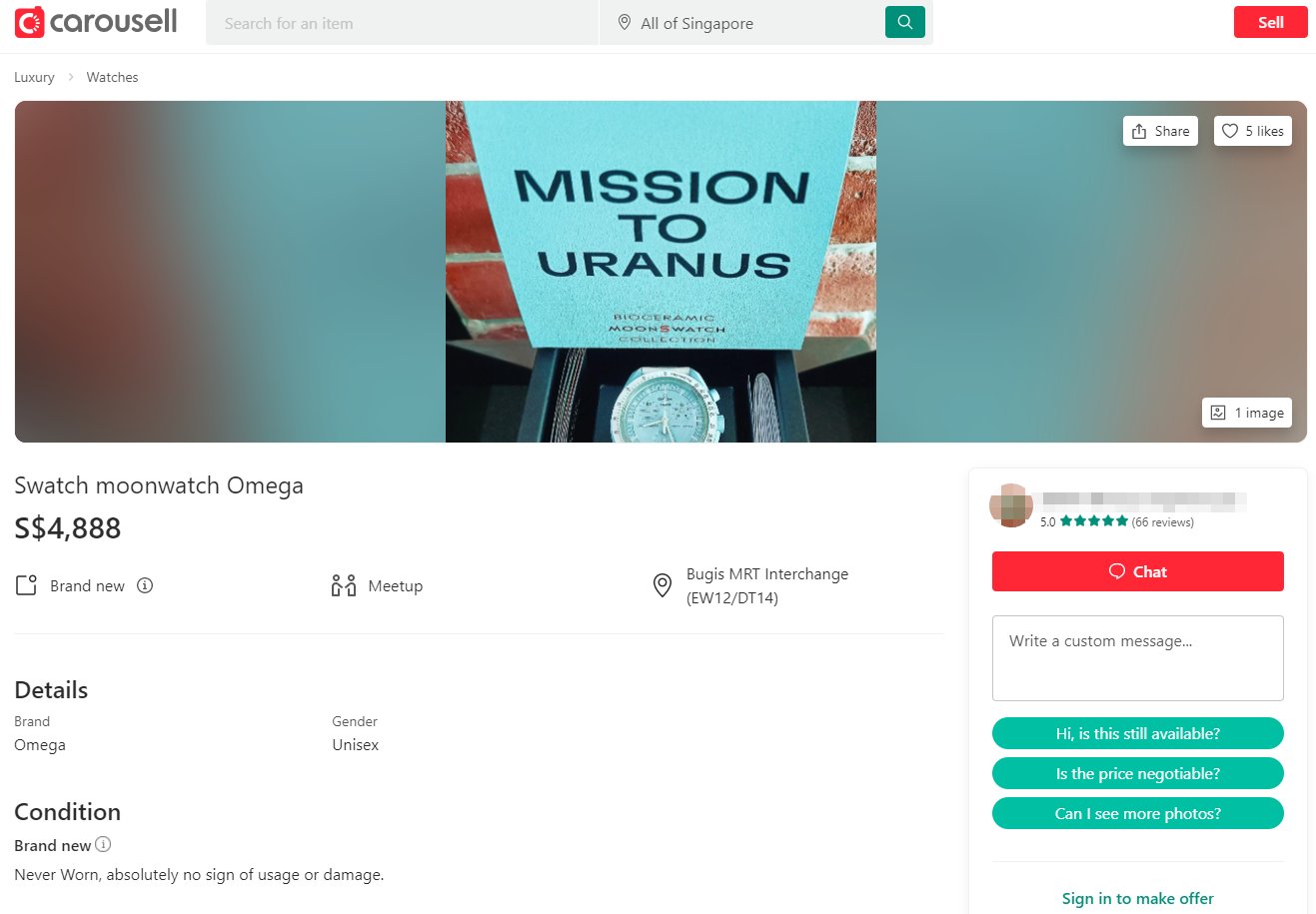 Carousell seemed to have taken down many of such listings shortly after they went up.

Some users also listed tickets, which would allow them to buy the MoonSwatch watches at specific timings, for similar prices. 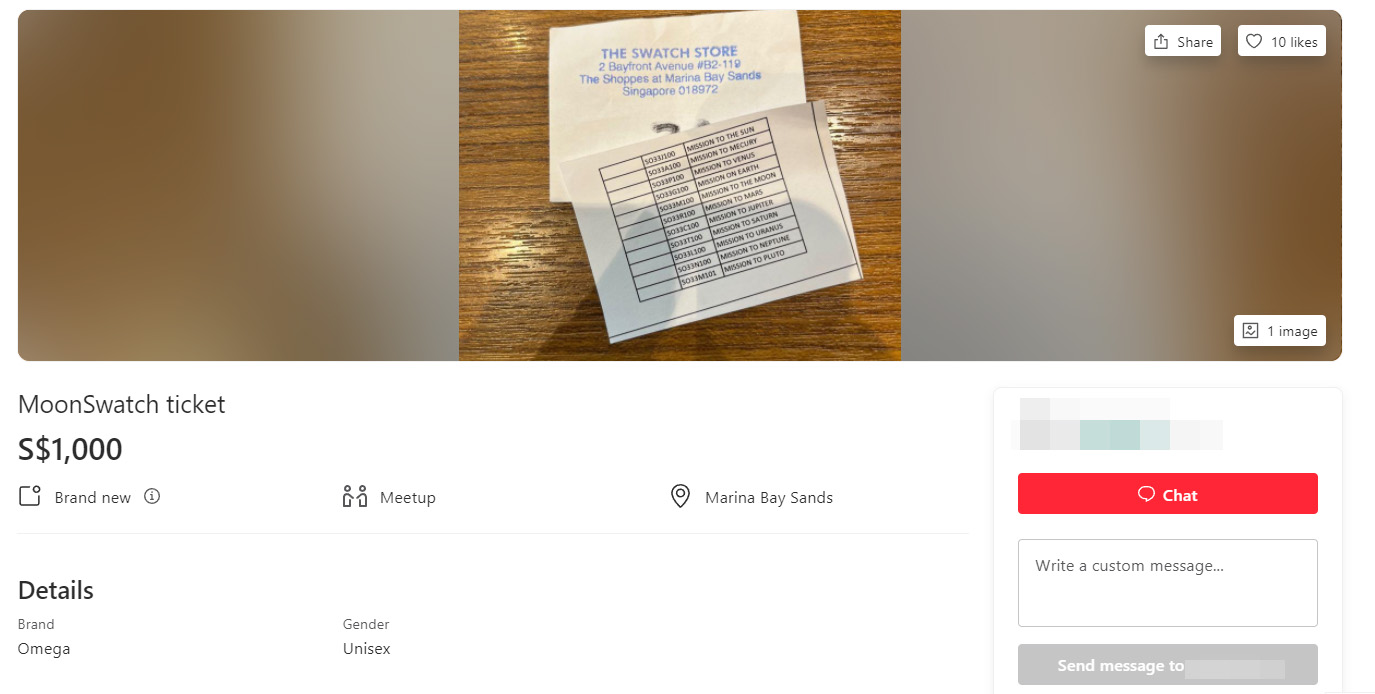 One Carousell user, who managed to get their hands on all 11 pieces from the collection, allegedly sold the entire set for S$28,000. Interestingly, some users took it upon themselves to create listings informing potential buyers not to fall prey to scalpers’ ‘chop carrot’ – or con – prices. 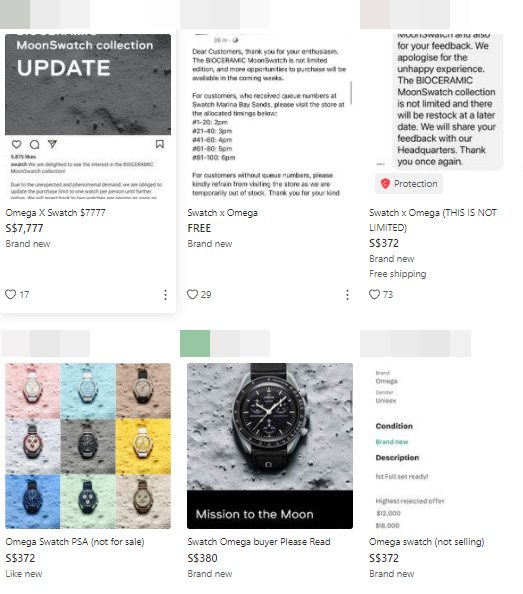 In the description, the users reminded buyers that the watches are not limited edition and that Swatch will be restocking them in the near future.

They also pointed out that scalpers are merely trying to make a quick buck by selling them at sky-high prices. They thus advised buyers to simply wait for the stores to replenish their stocks.

Hope buyers will be wise about their purchases

This isn’t the first time, and neither will it be the last, that scalpers resell coveted items for a quick profit.

In this case, such practices not only deny genuine buyers the opportunity to own one of their desired timepieces but might also give the Singapore watch community a bad name.

As much as buying watches is a personal choice, we hope prospective buyers will not chase the hype blindly and pay exorbitant prices for these timepieces, lining scalpers’ wallets in the process.