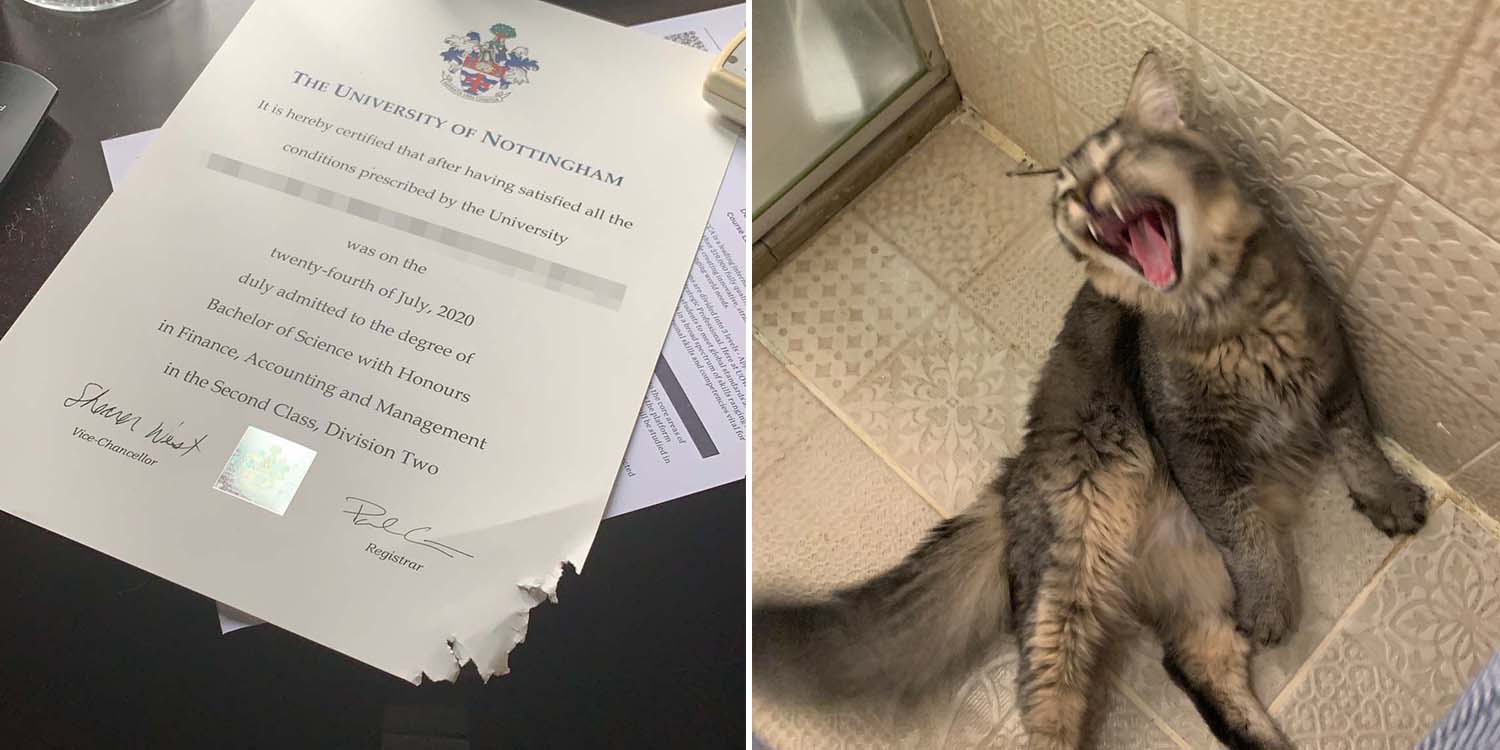 The age-old excuse that “the dog ate my homework” may have been a ridiculous idea, but a cat has recently decided to turn it into a reality — except with its owner’s degree instead.

On Monday (21 Dec) a man from Malaysia shared on Twitter that his cat had eaten his university degree.

While the situation may seem like quite a cat-astrophe for him, netizens found his situation hilarious, and his Tweet quickly became viral.

After years of hard work and pulling all-nighters, holding the certificate for your degree provides a great sense of accomplishment.

So imagine a man’s horror when he returns to his room, only to find the precious piece of paper partially damaged. 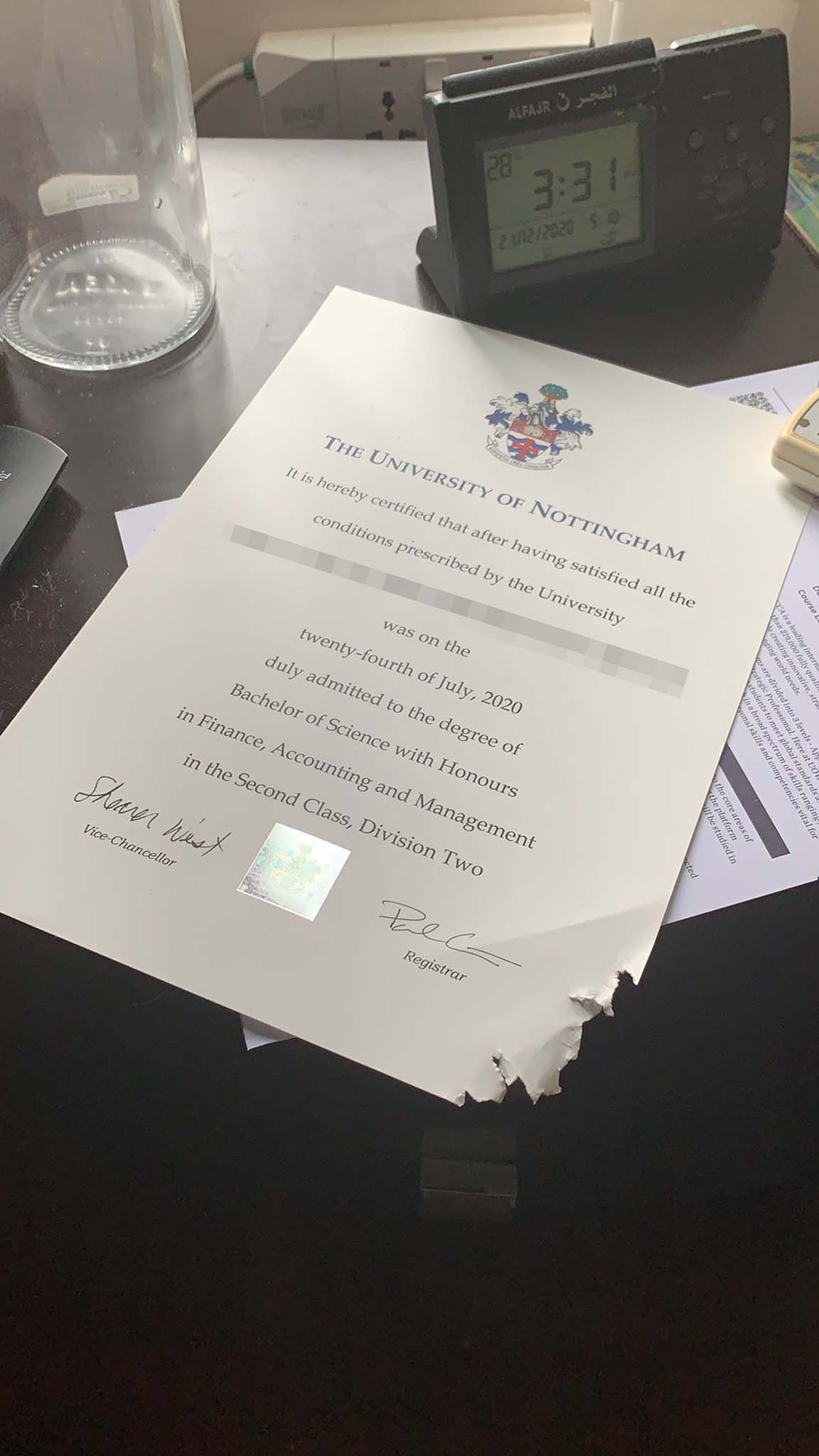 Thankfully, most of the certificate is still intact, with only the bottom corner torn up.

Owner jokes that he’ll sell cat for eating his degree

He had no trouble finding the culprit, who was chilling in the a corner of the home, as though nothing had happened. This photo probably sums up the denial we imagine the kitty had when the man confronted it. 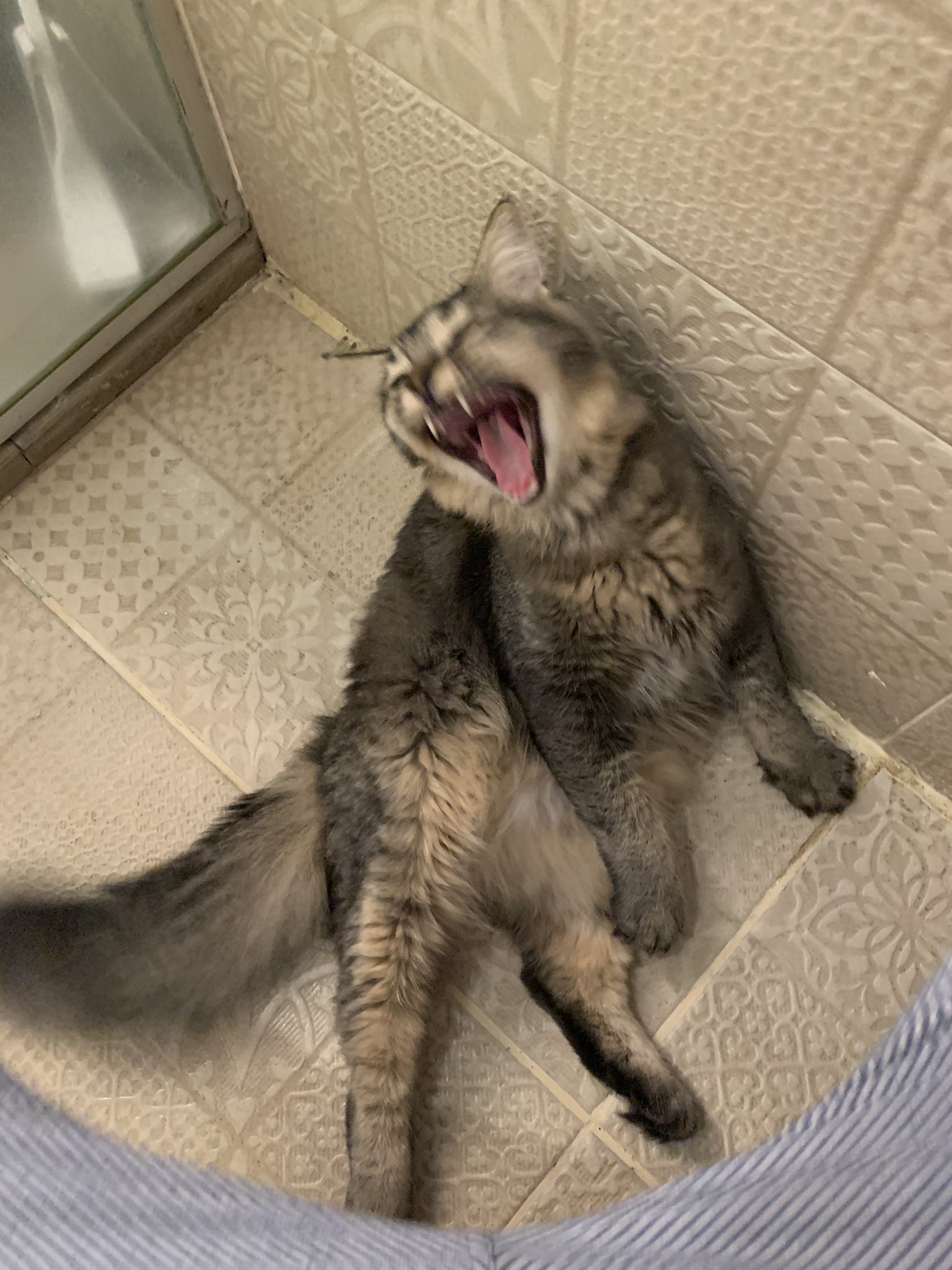 According to the Malaysian man’s tweet, he had tonnes of “useless papers” in his room.

Yet his cat just had to chew up that one valuable piece of paper he had worked so hard and paid so much money for.

His tweet quickly gained virality, with over 78,700 retweets at the time of writing.

The man even embraced his newfound identity, renaming his Twitter display name to “guy *whose cat ate his degree”.

He even joked that he’ll sell off his cat in an interaction with a netizen. 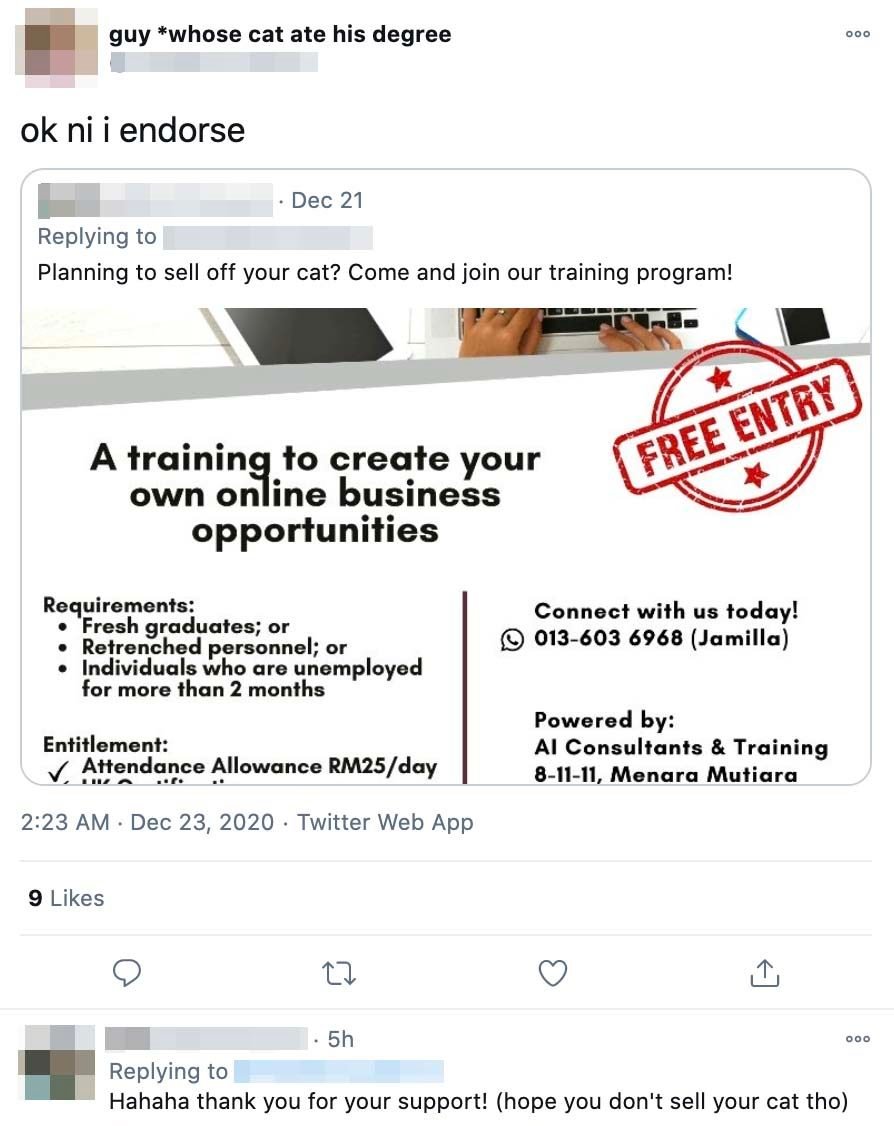 Apparently, pets eating degrees is more common than we might think.

Other netizens also shared their own experiences of their nightmare pets destroying their degrees. Even cute little kitties seem to love their pa-purrr snack with a side of annoying their owners. 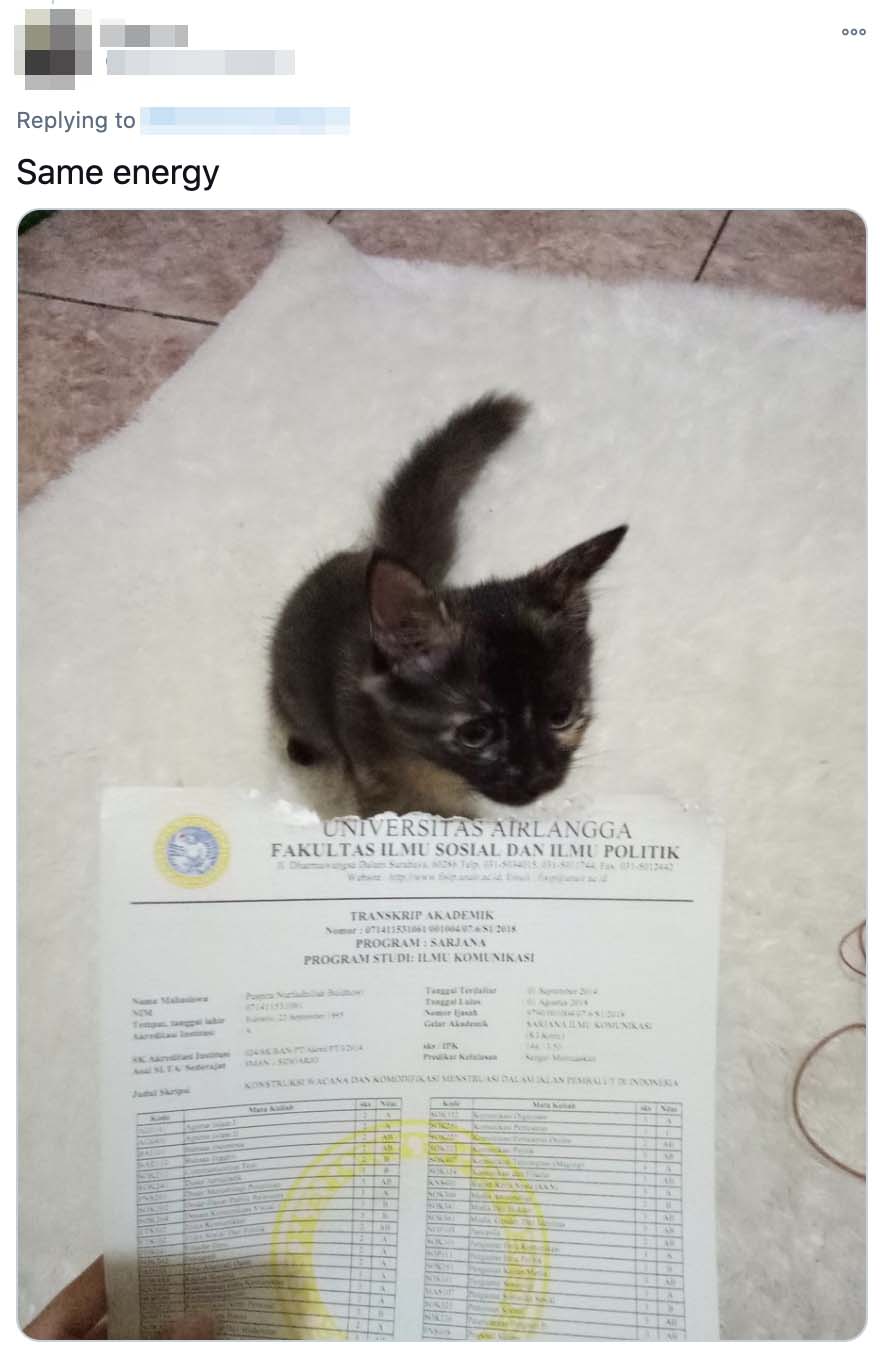 This netizen recounts his truly unfortunate experience of his dog tearing apart his degree. 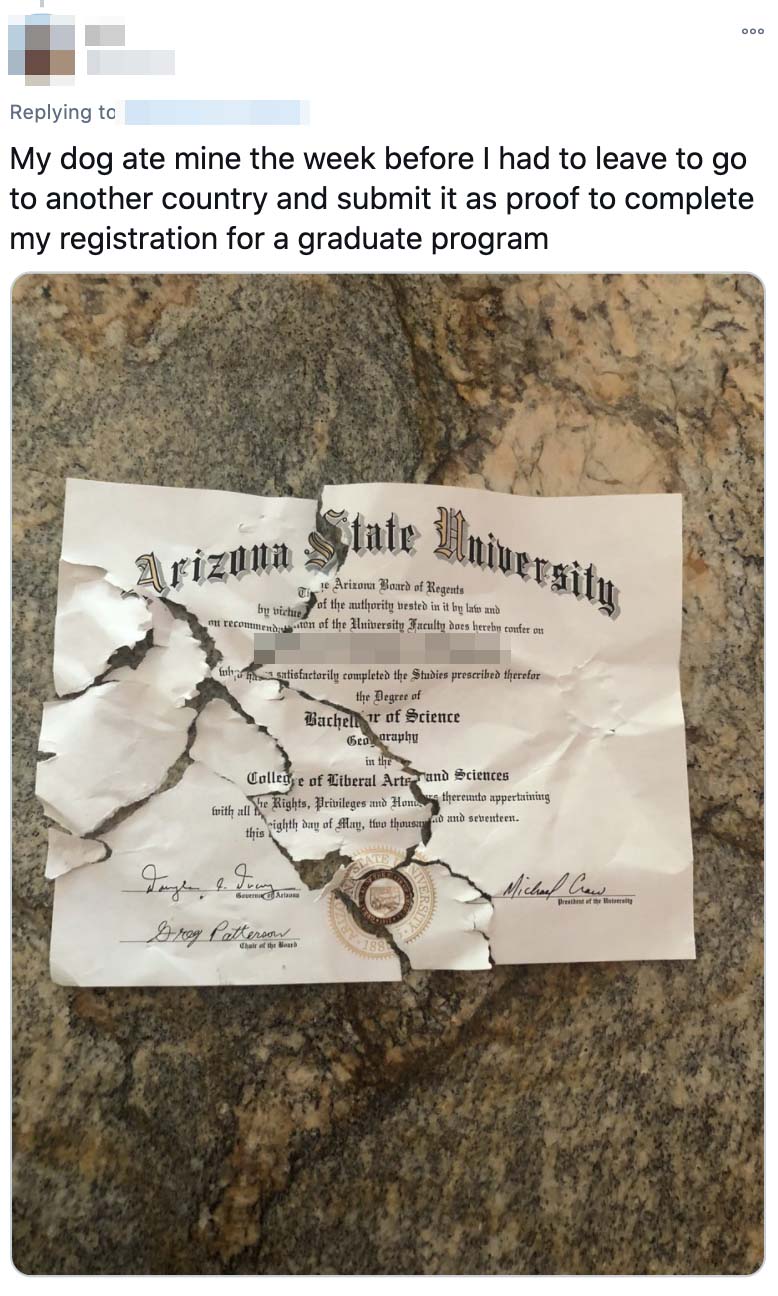 Of course, the incident had to happen right before he needed it to register for a graduate programme. That’s truly ruff.

Perhaps the one silver lining to the overnight fame is that the Tweet also caught the university’s attention.

They replied to the man’s Tweet early this morning (23 Dec), offering to “sort something out” with regards to his damaged certificate.

As for the cat’s behaviour, they confess that they can’t do anything to help.

But we’re sure the feline has gotten quite the nagging from its owner, and has learnt its lesson.

If there’s anything this incident teaches us is that, the next time someone says their dog ate their homework, we might just have to believe them.

In all its hilarity, this is a tough way to learn an important lesson — always keep your important documents tucked away safely.

Especially if you have playful little pets running about.